First run in November, 1954 as a club race for local motoring enthusiasts, the Macau Grand Prix has evolved into what many believe is the finest street circuit race meeting in the world. The first meeting, for cars only, was held on 30th and 31st of October 1954 although the circuit left much to be desired with officials noting “the back of the circuit is very bad – mostly dirt and loose sand.”

During the spring and early summer of 1955, the entire back section of the circuit was closed to traffic so that its old cobbles could be dug up and replaced with asphalt. And in 1958, the circuit was reduced to its present length of 3.8 miles.

However, it wasn’t until 1967 that the first Motor Cycle Grand Prix took place and it was dominated by locals, Japan’s factory Yamaha rider Hiroshi Hasegawa taking the chequered flag as he completed the mammoth 30-lap race in a time of 1hr 53m34.00s.

The Japanese rider won following year too whilst 1969 saw history made as John MacDonald became the first – and only – man ever to have won both the Macau Car Grand Prix (1965) and the Macau Motor Cycle Grand Prix. Speeds were increasing all the time although it took until the seventh running of the race in 1973 before the first sub-three minute lap was recorded, race winner Ken Araoka lapping at 2m56.68s on his Suzuki.

Chas Mortimer becomes the first European rider on the podium

Slowly but surely, the event began to attract interest from across the world and in 1976 Chas Mortimer not only became the first European rider to stand on the podium, he also became the first to win the race. Indeed, save for Sadao Asami’s hat-trick between 1978 and 1980, it’s been dominated by European, especially British, and American riders ever since.

Asami was the first rider to complete a hat-trick of wins but the 1980s saw British rider Ron Haslam dominate with six wins from six starts, three of which came on 500cc Honda Grand Prix machinery. Fellow GP riders Kevin Schwantz and Didier de Radigues also won on 500cc factory Suzuki’s and although the latter’s was the last achieved on a works bike, race wins were taken during the 1990s on privateer 500cc machines by Steve Hislop, Phillip McCallen and Mike Edwards.

Domination of the four-stroke Superbike

Since 1997 though, it’s been dominated by four-stroke Superbike machines, firstly 750’s and then the 1000cc bikes. It continues to play host to some of the finest road racers in the world with Isle of Man TT race winners David Jefferies, Michael Rutter, John McGuinness, Steve Plater and Ian Hutchinson just some of those to have tasted success at the venue.

The entry continues to comprise mostly of British and American riders with a smaller selection of mainland Europe contenders.

Rutter is now the most successful rider in the history of the event with eight wins and 19 podiums taken between 1994 and 2018. The Midlands rider also set the first ever 90mph lap in 1998 with the lap record now in the hands of Scottish rider Stuart Easton at 95.32mph.

Check out these on board laps with Shoesmith!

The race weekend normally starts on the Thursday and ends on the Sunday on the second or third week of November. The first two days (Thursday and Friday) are generally scheduled for practicing and qualifying with the motorbikes having a single free practice session and two qualifying sessions of 45 minutes. Originally run as a single 30-lap race, the GP switched to two 15-lap legs in 1979 before becoming just a single 15-lap affair in 1995. It is now held over 12 laps on the Saturday afternoon.

The 50th running of the Macau Motorcycle Grand Prix took place in 2016 and in 2018 Peter Hickman took his third win in four years thus becoming only the sixth rider to win the race three times or more. Rutter extended his record number of wins to nine in 2019 although the race result was declared after just one lap due to a number of red flag incidents.

The motorcycle Grand Prix supports the Formula 3 Grand Prix, which has seen future World Formula One Champions including Michael Schumacher, Mike Hakkinen and Lewis Hamilton compete, and the final round of the World Touring Car Championship. 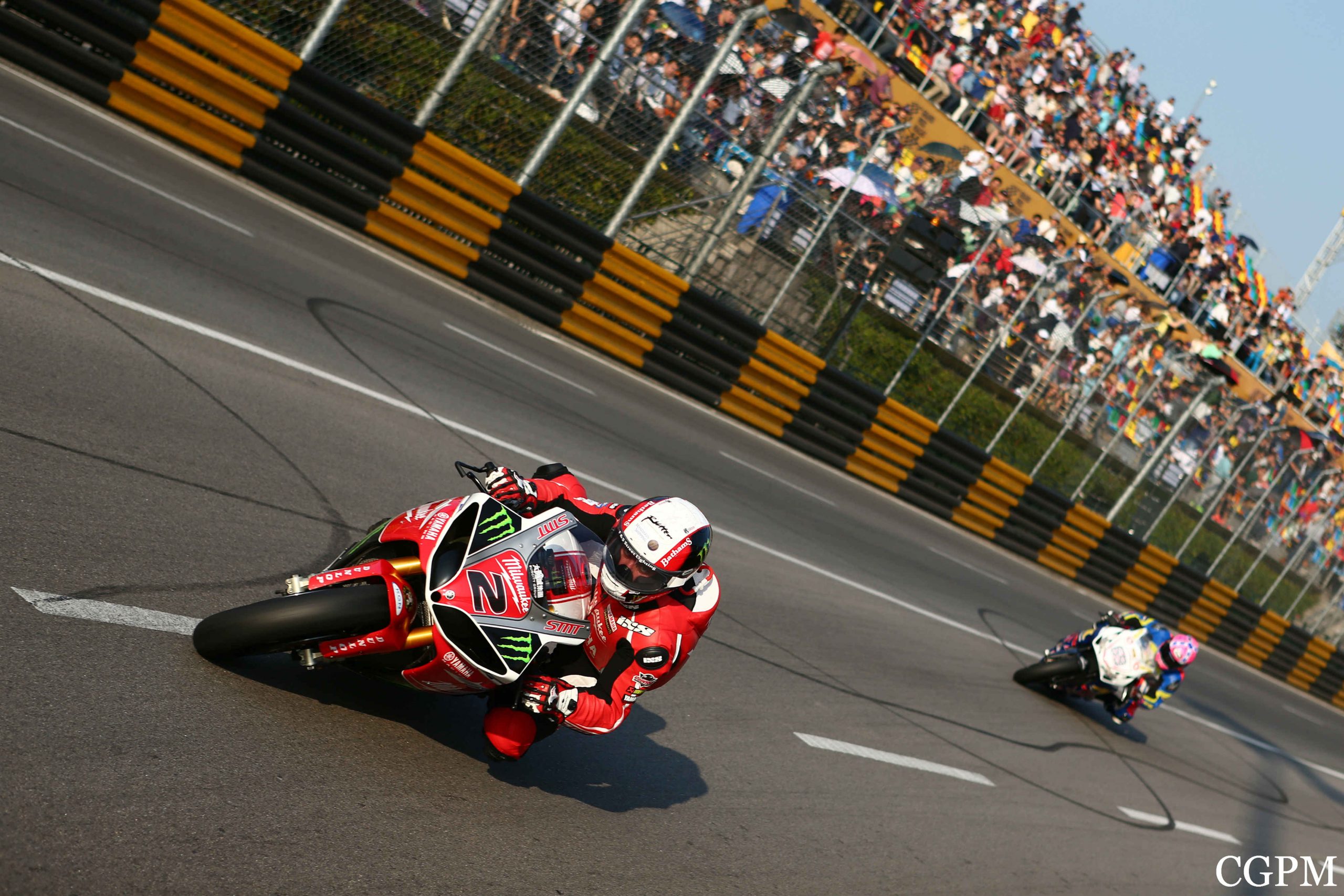 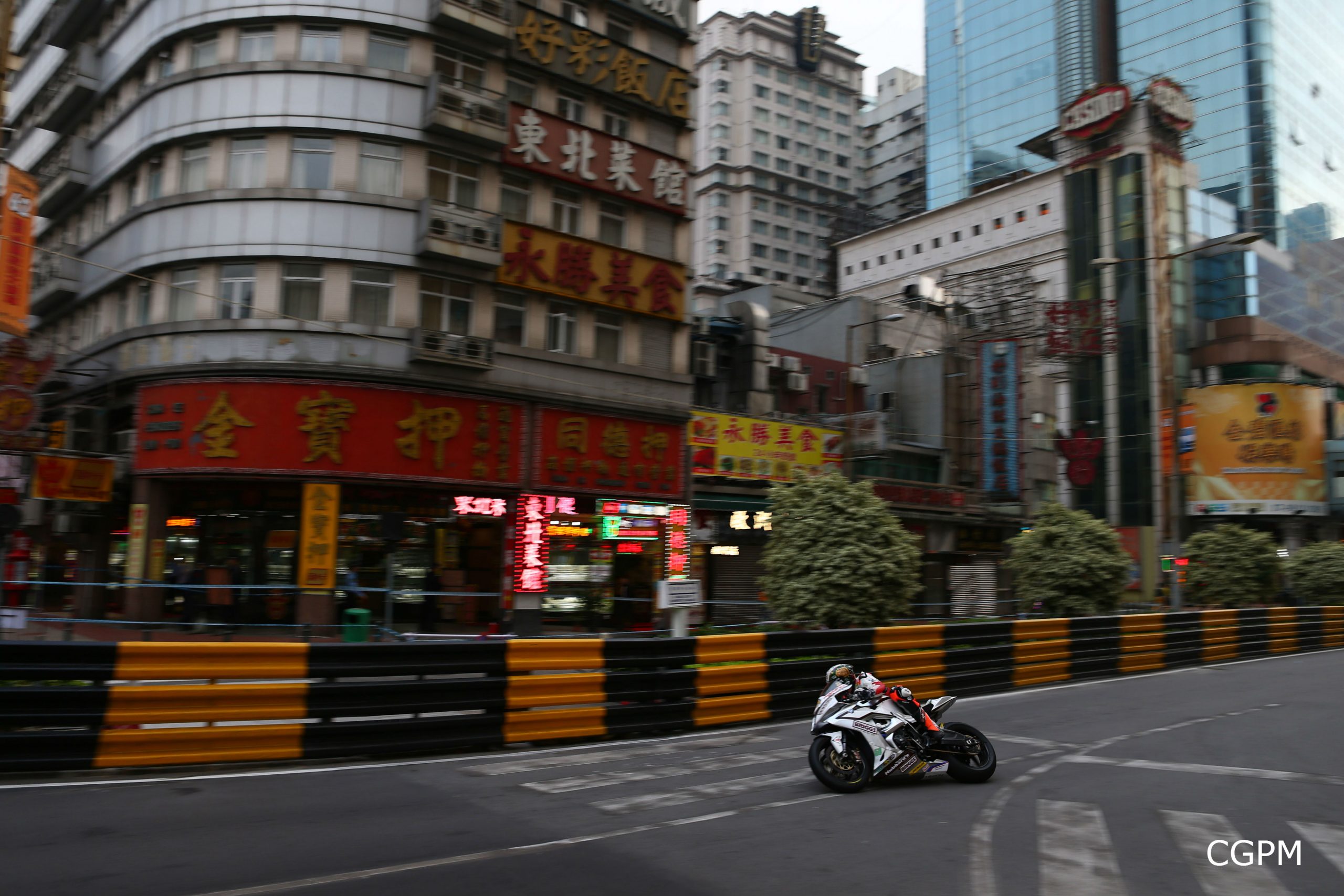 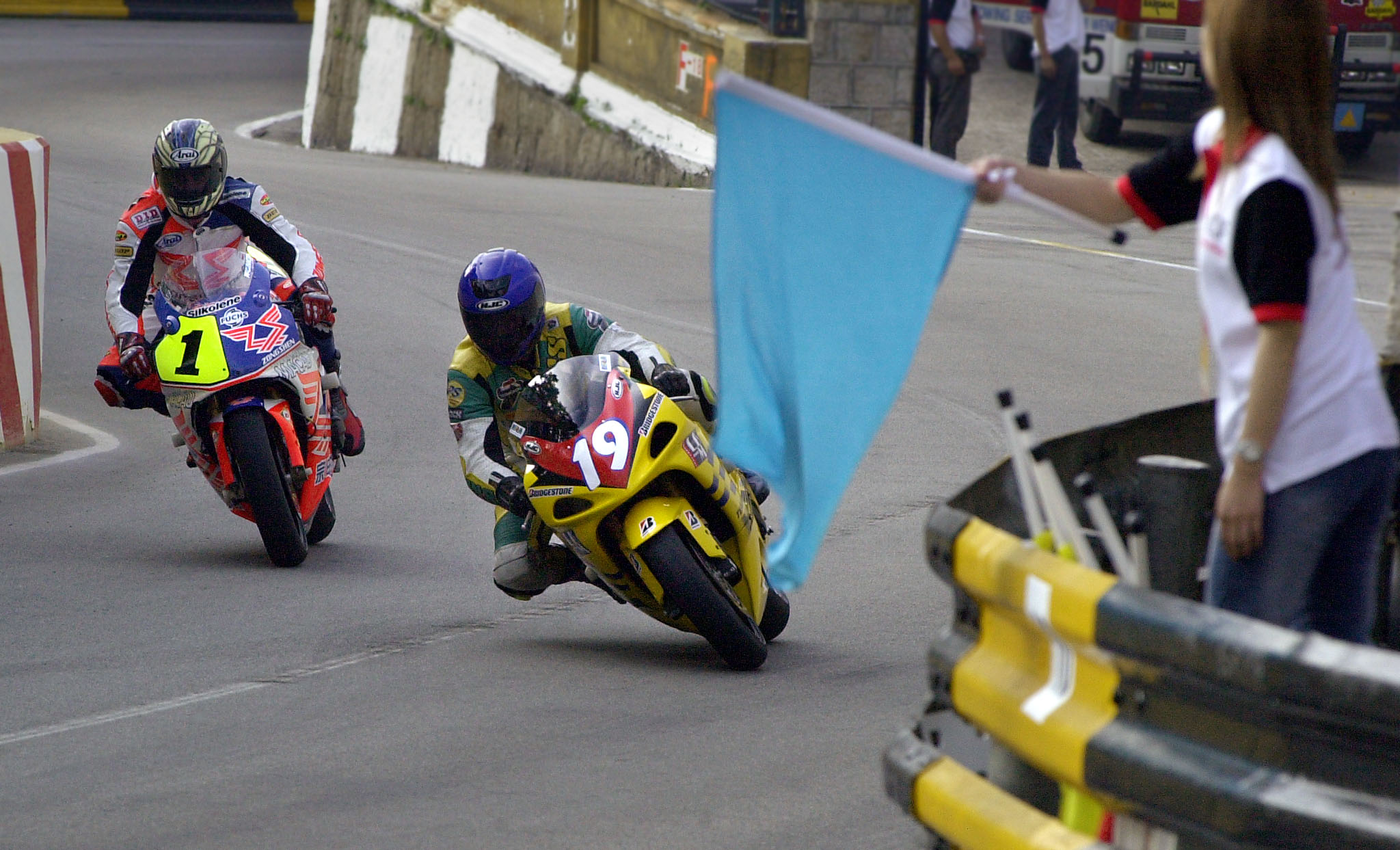 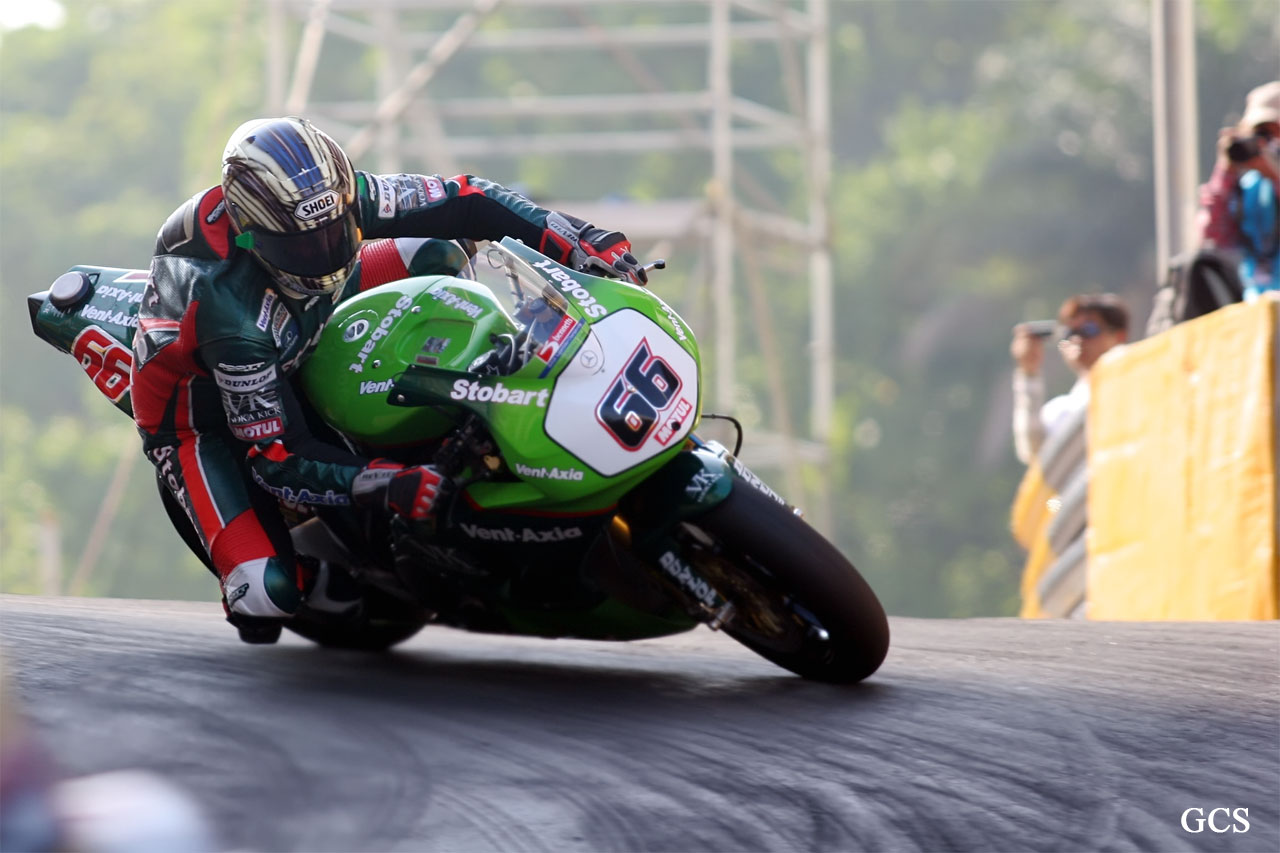 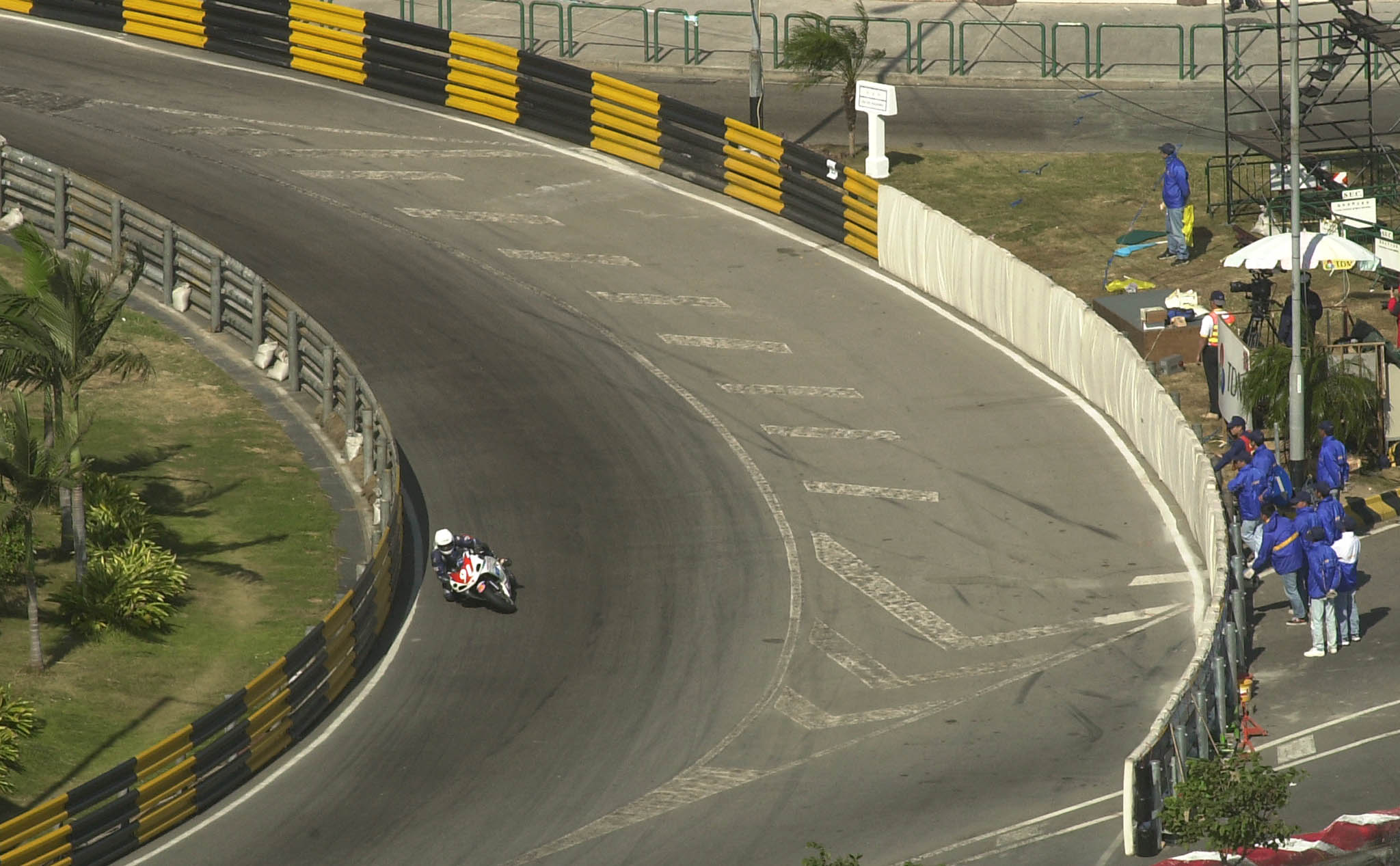 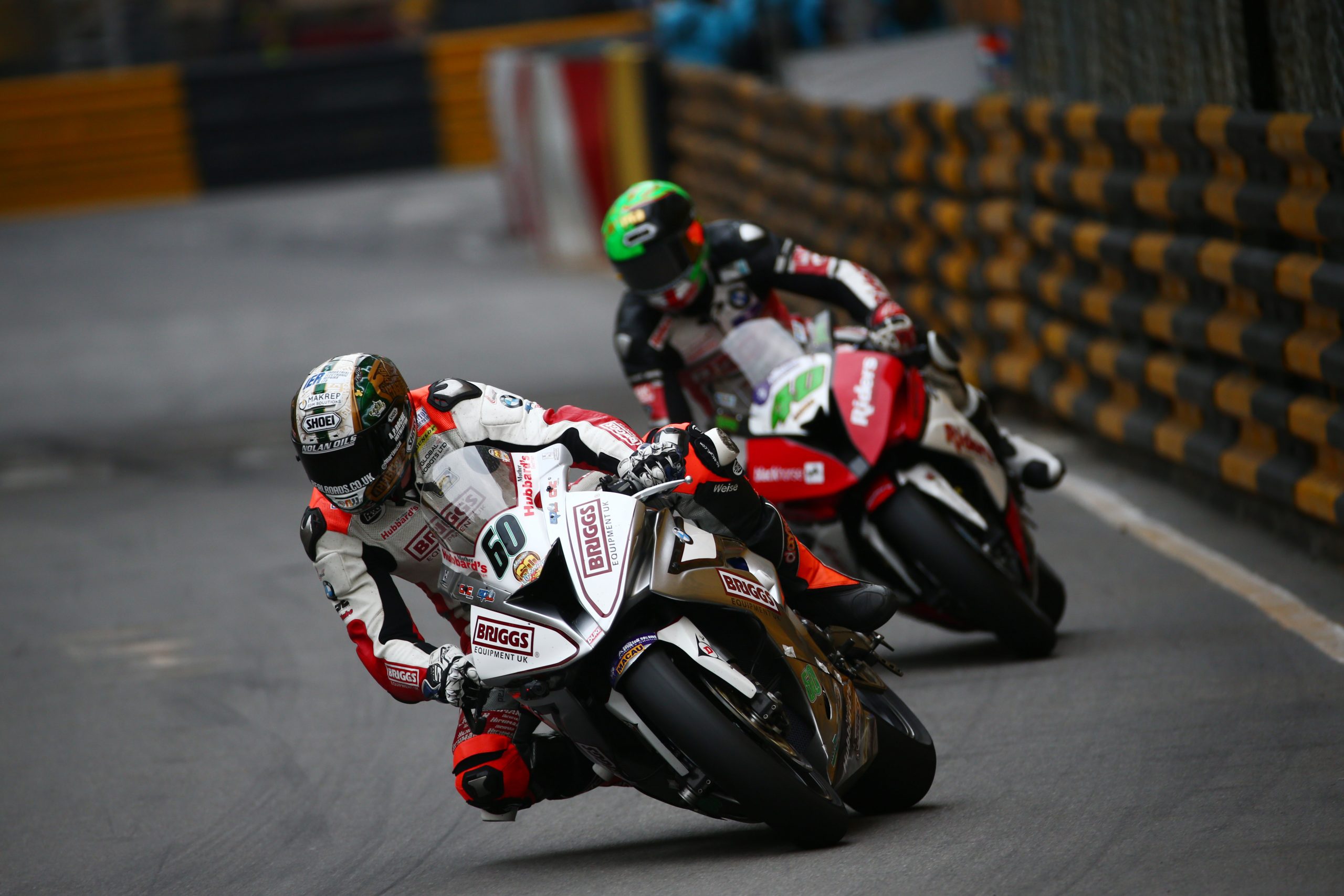 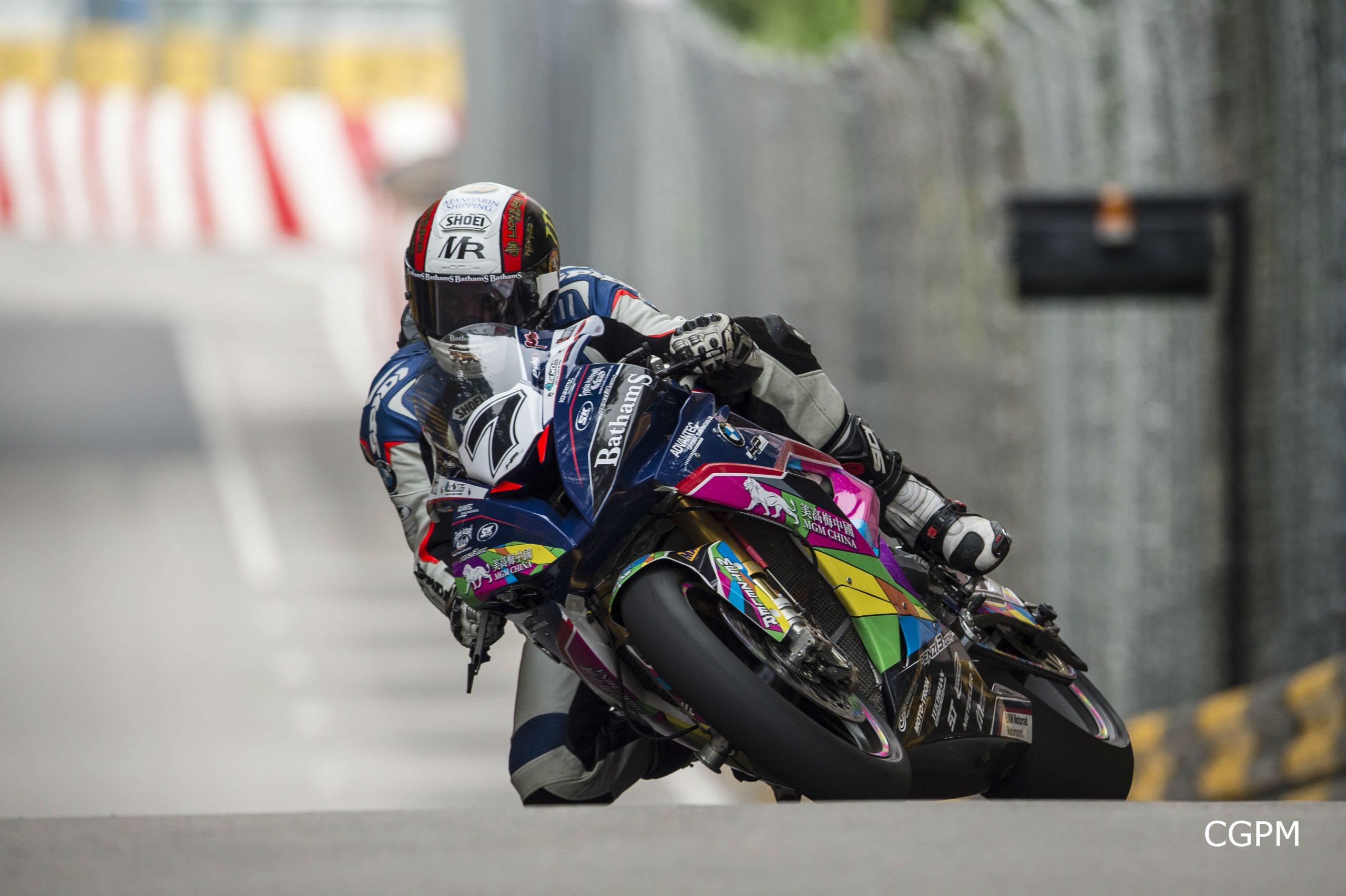 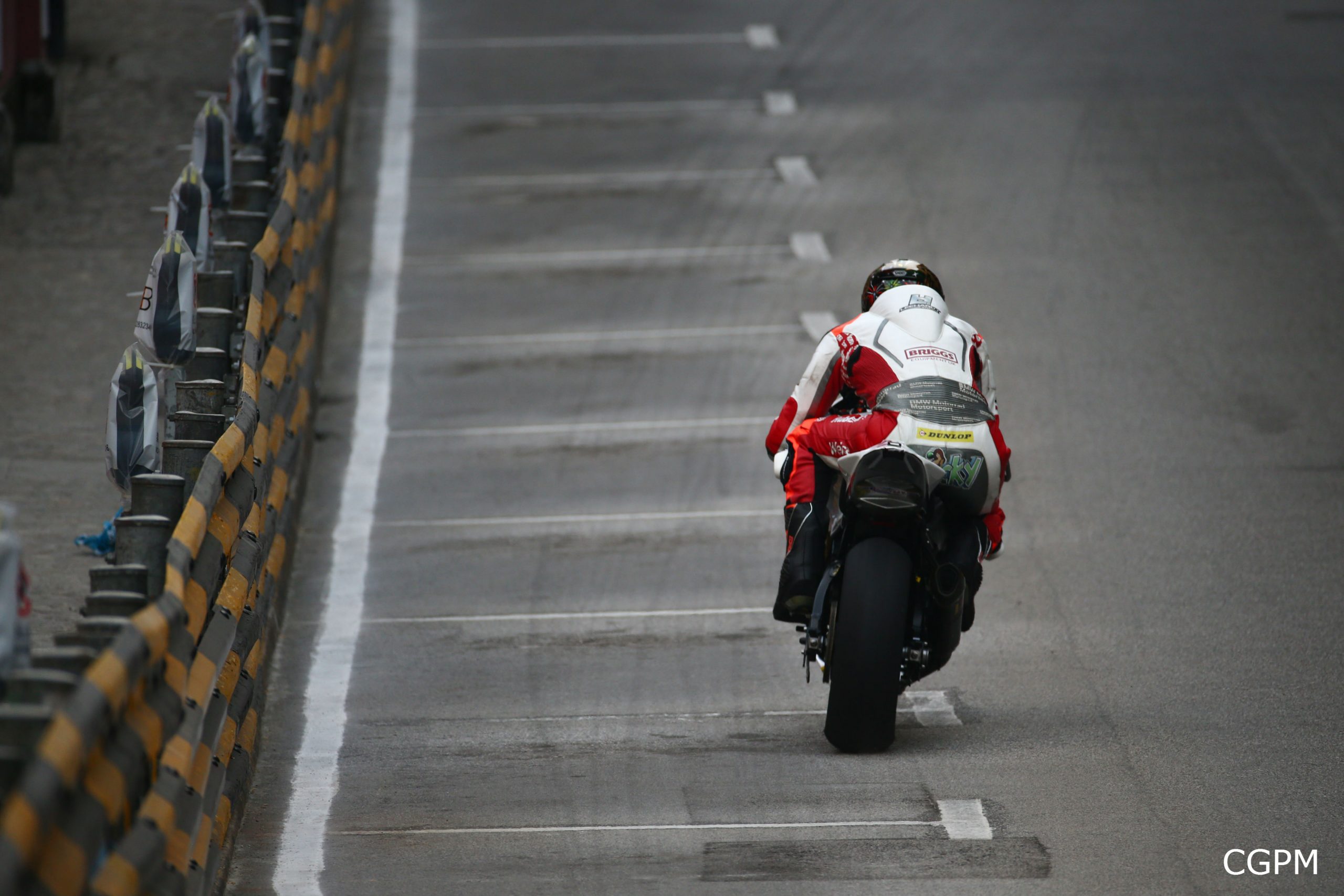 1967 – The first running of the Macau Motor Cycle Grand Prix saw Japan’s Hiroshi Hasegawa take the chequered flag when his Yamaha RD 56 completed 30 laps of the Guia circuit in a time of 1:53:34.00

1969 – John MacDonald became the first – and only – man ever to have won both the Macau Car Grand Prix (1965) and the Macau Motor Cycle Grand Prix.

1973 – More than 100 entries were received for the seventh running of the race, won by Japan’s Ken Araoka on a Suzuki. Araoka also set a new lap record of 2:56.68, the first rider to lap the Guia Circuit in under three minutes

1979 – For the first time, the GP was run in two legs of 15 laps each; Sadeo Asami, riding a Yamaha TZ-OW, was the clear winner of both legs while Steve Parrish was second on points, and Bernard Murray, third.

1980 – Sadeo Asami made history when his win made him the only competitor to win the same event three consecutive years. British riders Steve Parrish and Bernard Murray repeated their second and third place finishes of the year before.

1982 – Despite the wet and windy conditions, Ron Haslam won the race for the second consecutive year.

1983 – Ron Haslam made it three wins in a row with victory over team-mate Roger Marshall.

1986 – Grand Prix riders Haslam and Didier de Radigues returned and shared the race wins although it was the Brit who again took the overall victory.

1987  – Typhoon Nina lashed the China coastal area but winds subsided enough to run a 10-lap race which saw Ron Haslam become the Grand Prix’s most successful rider with six wins to his credit.

1988 – American ace Kevin Schwantz wowed the crowds with his high riding antics – including wheelies at 90 mph – on his way to taking victory and a new outright lap record.

1989 – Due to bad weather and fading light, the Motor Cycle GP was shortened to eight laps, with Ulsterman Robert Dunlop taking the chequered flag.

1991 – World Championship rider Didier de Radigues rounded off a distinguished career by taking the Silver Jubilee of the Motor Cycle Grand Prix and a new outright lap record of 87.76mph.

1994 – Steve Hislop took the third of his three wins with overall victory on the 500cc ROC Yamaha.

1997 – Veteran Swiss road racer Andy Hofmann, on his 750cc Kawasaki, won the race by almost seven seconds ahead of 1996 winner, Phillip McCallen on a 500cc Yamaha. Shawn Higbee, on a Suzuki 900, took third, making him the first American privateer on podium for almost a decade.

2001 – John McGuinness takes his first victory and becomes the first rider to lap in under 2m30s.

2002 – In the 36th running of the race, which was held on the Sunday because of rain on Saturday, Michael Rutter joined an elite band of three other riders who had won the event three times. The UK-based rider beat former winner and close rival John McGuinness to the chequered flag. David Jefferies, who had won the event in 1999 was third.

2004 – The race was moved to a Saturday afternoon slot from its previous early morning fixture.

2006 – Briton Steve Plater, on board the AIM Racing Yamaha emerged triumphant from a record-breaking race to take victory over Michael Rutter with the lap record broken no fewer than four times.

2007 – In the 41st running of the race, Plater claimed his second victory in succession. But the 34-year-old British racer had a massive stroke of luck on the 15th and final lap of the event when he and rival John McGuinness, on the Stobart Vent Axia Honda encountered two lapped riders at the Melco Hairpin.

2009 – After a thrilling race on Saturday, it was pole-sitter Stuart Easton who won the Macau Motorcycle Grand Prix for the second year in a row, breaking the lap record in the process.

2010 – Stuart Easton made it three wins in a row, this time on a Kawasaki, setting the first sub 2m25s lap in the process.

2011 – Michael Rutter became the most successful rider ever on the Guia Circuit, taking his seventh victory with a margin of 4.772 seconds from Martin Jessopp and Ian Hutchinson.

2012 – With rain interrupting the schedule, the race was run on Sunday and, again, Rutter proved untouchable, putting on a masterclass display of wheel-perfect racing. Rutter was never really challenged and took his eighth victory with Martin Jessopp having to settle for second place once again. Simon Andrews on an Ice Valley BMW claimed a strong third.

2013 – The race saw a fairy-tale comeback for Ian Hutchinson, who returned to competition after an 18-month layoff due to injury. Hutchinson grabbed the lead he and immediately opened up a gap to complete an incredible comeback and take his first Macau victory.  Rutter finished second in the shortened 11-lap race with Gary Johnson earning his first career Macau podium in third.

2014 –Stuart Easton took his fourth win to become the third most successful rider ever.

2015 – New road racing sensation Peter Hickman, having his first ride in the GP after crashing in practice in 2014, dominated proceedings to take a stunning win from pole man Martin Jessopp.

2016 – The 50th running of the Macau Motorcycle Grand Prix takes place with Hickman making it two wins in a row. Rutter finishes second to extend his record number of podiums to 17 whilst pole man Jessopp has to settle for third.

2017 – Glenn Irwin wins the Macau Grand Prix at just his second attempt thus becoming the first Northern Irishman to win since 1996. Hickman takes second and Rutter third, the latter now having a record total of 18 podiums. But the race is stopped at half race distance and overshadowed by the tragic death of English rider Dan Hegarty.

2018 – Hickman claims pole position, the fastest lap and the race win to take his third victory in four years and become just the sixth rider to win the race three times or more.  Rutter takes the 19th podium in second whilst Jessopp finished in third for his sixth podium since 2011.

2019 – Michael Rutter extends his record number of wins to nine with a shortened race seeing two separate crashes and red flags and the race result declared with just one lap having been completed. Peter Hickman takes second with David Johnson taking his first Macau GP podium in third.

Macau GP: A Thrilling Conclusion to 2016

History of the Manx Grand Prix