History of the British Superbike Championship

The origins of the British Superbike Championship can be traced back to the early 1970s when the Japanese manufacturers were introducing their 750cc machines onto the world stage, most notably Yamaha, Suzuki and Kawasaki. Together with the British Norton, Triumph and BSA machines, a new class was added to the British race programme with weekly newspaper Motor Cycle News adding their support to the series.

The MCN Superbike Championship ran from 1971 until 1982 and, as it evolved, was essentially an open class series allowing anything from 351cc upwards. Despite there being other Championships, including the officially titled ‘British Solo Championship’, it was widely recognised that the MCN Superbike Championship was the premier series that the manufacturers lent their support to and what everyone wanted to win. Indeed, champions over the years included Percy Tait, John Cooper, Barry Sheene, Mick Grant, Dave Potter, Ron Haslam and Roger Marshall.

During the early 1980s, the 750cc machines disappeared, largely due to it being scrapped at World level, and, instead, British racing saw split Championships for 500cc and F1 machines before the latter too started to fade away. By 1988, the British Formula One Championship was the feature British Championship although this soon got upstaged and replaced by the Superbike class, largely because of the flourishing World Superbike Championship that had begun in 1988.

However, there was still more than one championship to be won with the HEAT Supercup and Motor Cycle News Superbike Championships ups for grabs. British racing had become fragmented and although 1994 saw everything come back under one umbrella, domestic racing needed a shake up and it happened in 1995 when the Motor Cycle Racing Control Board (MCRCB) assumed control from the ACU. That year saw their first involvement with the Superbike Championship, won by Steve Hislop, and it’s continued to develop ever since.

Over the years, it has enjoyed various title sponsors including MCN, Halls, Think!, Bennetts and MCE and the championship is now managed and organised by MotorSport Vision who also own four of the circuits the series visits.

All of the major manufacturers from around the world have been involved with official teams and factory machines whilst team sponsors have included household names such as Airwaves, Rizla, Cadbury’s, Virgin, Red Bull, Swan and Buildbase. Wealthy businessmen have also been fiercely loyal over the years.

The series typically races over twelve rounds from April to October, with the series concluding in a three-round ‘Showdown,’ where the top six riders are awarded points based on their podium finishes from the previous nine rounds and then compete over three rounds and seven races for the title. The Showdown format was introduced in 2010 in order to prevent a rider from making a runaway victory in the championship.

The BSB Championship has always been innovative, the aforementioned Showdown being the prime example, and 2002 saw them allow 1000cc machines back into the Championship, a year ahead of the World Series, as the 750cc machines again drifted away.

Although they followed the lead of the Superbike World Championship in 2008 in appointing Pirelli as the single control tyre supplier, more often than not they have dared to be different with their technical regulations always one step ahead of everywhere else. It is this that has allowed them to maintain full grids and close racing when others around the world have floundered.

Niall Mackenzie was the most successful rider of the 1990s, with three titles, whilst other past champions include Neil Hodgson, Australian Troy Bayliss and Steve Hislop. Chris Walker has finished as runner up 4 times and many riders from the series have gone on to race in MotoGP or the Superbike World Championship. However, it’s Shane Byrne that now has the honour of being the most successful BSB rider ever with 6 titles, 85 wins and 189 podiums.

The Championship also featured a concurrently run Privateer’s Cup to reward the lesser funded riders and teams and this ran until 2010 when it was replaced by the Evo class, which was again designed to cut costs and allow those with a reduced budget to compete. Indeed, 2010 would be a year of many changes with Saturday afternoon’s solitary qualifying session only deciding pole position for Sunday’s opening race only. The grid for races two and three, when applicable, would now be decided by the fastest laps of each rider in races one and two.

It was the domination of Leon Camier and the Airwaves Yamaha in 2009 that saw the biggest change in 2010 though. The Kent rider won a record 19 races that year and clinched the title with four races to spare thus making the last few rounds almost null and void. From 2010 onwards, the championship was divided into two parts, similar to the system used in some of the main car racing series’ in the United States, including the NASCAR Sprint Cup Series.

Each Title Fighter starts The Showdown with 1000 points, plus additional points for each podium position they have obtained in the Main Season – this was initially 3 for a win, 2 for a second, and 1 for a third, termed “Podium Credits”, but has since become 5, 3 and 1 to reward race winners more.

The standard points scoring format from the Main Season then continues for The Showdown, with all points scores from the final nine races counting. All riders outside of the Title Fighters continue to race for the BSB Riders’ Cup, continuing to add to their points total from the end of the Main Season. 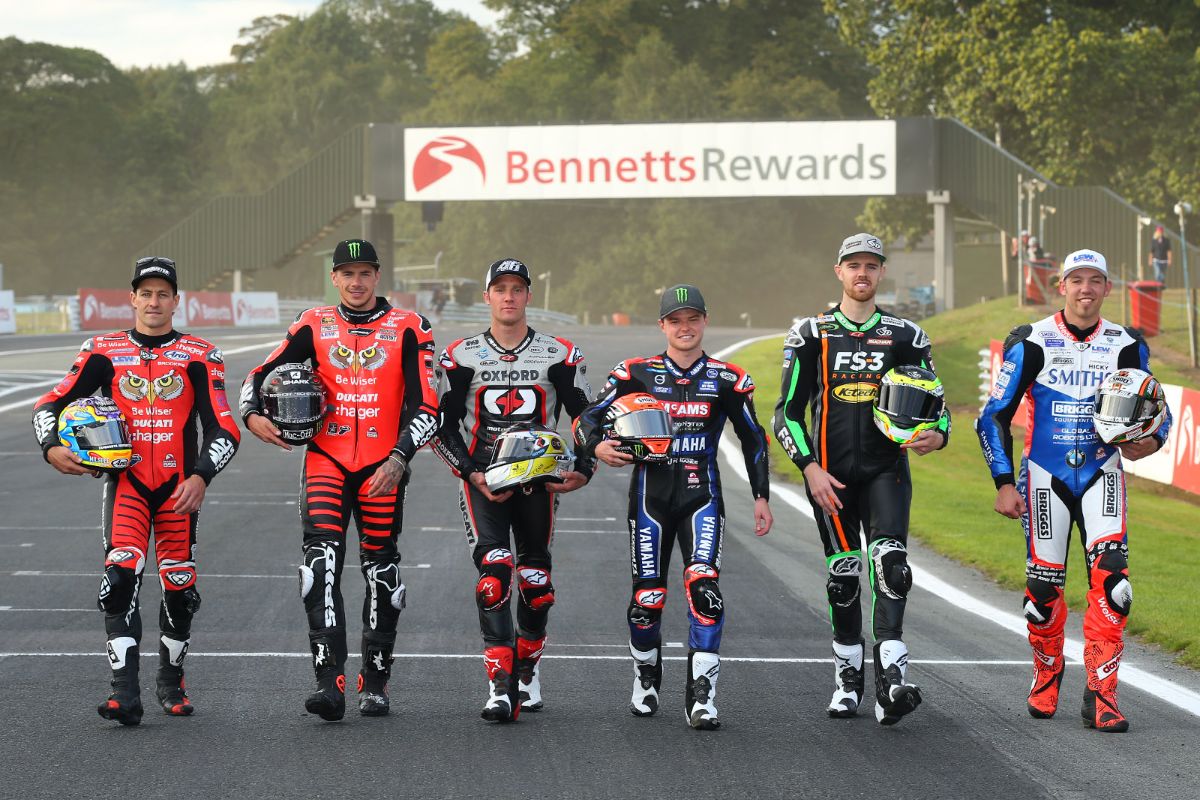 For the 2012 season, MSV announced a number of changes to the technical regulations to enhance the spectacle of the British Superbike Championship, essentially eliminating expensive electronic rider aids and cutting costs further.

The Superbike racing motorcycles that we have all become accustomed to are derived from standard production models with the BSB seeing a variety of machines in use since 1995 including:

A British Superbike Championship weekend takes place over three days, with practice on day one, qualifying and the first BSB race on day two and two BSB races on day three. A BSB race typically lasts around 30 minutes each and just like in four wheel racing, a safety car is deployed when deemed necessary by the Race Director to slow the pack down and enable crashed bikes to be recovered or injured riders to be treated by medical staff.

1990 – the Superbike class becomes the premier British Championship in the UK.

1994 – with previous seasons having seen more than one Superbike Championship, it returns to a single format with victory going to the 588 Duckhams Norton of Ian Simpson.

1995 – the MCRCB take control of British racing from the ACU with the Superbike class as we know it today being won by Steve Hislop.

1995 – Snetterton sees the first and only dead heat with Steve Hislop and James Whitham crossing the line together.

1996 – Niall Mackenzie returns to the UK after competing in the World Championships since 1987 and he promptly wins the first of three successive British titles.

1999 – Richard Branson steps in to back Mackenzie and Yamaha under his Virgin corporation but Australian sensation Troy Bayliss takes the title.

2000 – Neil Hodgson follows in the footsteps of former team-mate Bayliss by winning the title but only after a titanic season-long battle with Chris Walker. The Suzuki riders’ hopes disappear in a cloud of smoke in the final race at Donington Park just a few laps from the end.

2002 – the series changes allowing 1000cc four-strokes in for the first time as fewer and fewer 750s are being manufactured.

2003 – reigning Champion Steve Hislop is tragically killed in a helicopter crash in July.

2005 – Spaniard Gregorio Lavilla replaces James Haydon in the Airwaves Ducati team at round 2 and goes on to become the second overseas winner of the Championship.

2008 – the series follows the rules of the World Superbike Championship by introducing a one-make tyre rule with Pirelli becoming sole supplier.

2010 – after Camier’s dominance in 2009, series organisers introduce the three round ‘Showdown’, dividing the season into two. The first nine rounds form the main season with the top six contenders then going on to contest the title in the three round, seven race Showdown.

2010 – the Privateer’s Cup is removed and replaced by the Evo Class.

2011 – Tommy Hill takes the title from John Hopkins in the very last race of the season – just 0.006s separates them at the chequered flag.

2013 – Alex Lowes takes the title to become the youngest ever winner of the BSB Championship.

2014 – Shane Byrne becomes the most successful BSB rider ever as he wins his fourth Championship.

2015 – Josh Brookes becomes the second Australian to win the Championship and dominates the final few rounds, winning six out of seven races in the Showdown.

2017 – At 21, Jack Dixon becomes the youngest rider ever to qualify for the Showdown.

2018 – Haslam finally takes his first BSB titles after taking 15 wins and scoring points in every one of the 26 races held.

2019 – Former MotoGP rider and Grand Prix winner Scott Redding wins 11 races to become the first rookie to win the BSB title. He beats team-mate Josh Brookes by 5 points as the Paul Bird Motorsport team take their first ever 1-2 in the Championship. With Tommy Bridewell in third, Ducati take the first three places in the final Championship standings.

2020 – The COVID-19 pandemic sees the series cut to just six rounds but with three races at each and no Showdown, instead being a straight battle all the way through. Josh Brookes took his second BSB title with victory in the final race of the season whilst Storm Stacey becomes the youngest ever points scorer in BSB history at just 17 years of age.

2021 – Tarran Mackenzie wins the BSB title, 25 years after father Niall claimed the first of his three championships, the duo becoming the first father and son combination to win in the history of the series.

We’ve got the ultimate BSB records and stats guide next…

By far the best national series in the world with a huge amount of talented riders. Many of them could have succeeded in moto gp given a top factory team. Like his royal foggness said, the only reason he didn’t win a gp was nobody gave him a proper bike.

"Friendly and helpful experience and very pleased with quote"