Being a national championship, the British Superbike Championship has visited circuits throughout the United Kingdom, as well as European venues, over its history. At present, the series visits eight different tracks, seven in England and one in Scotland.

These tracks are Brands Hatch, Oulton Park, Snetterton, Knockhill, Thruxton, Cadwell Park, Donington Park and Silverstone. Assen became the most recent addition to the calendar, in 2012, although it hasn’t been used since 2019.

Rumours circulated in 2021 that the championship would be visiting the Bishopscourt circuit in Northern Ireland but this won’t be happening until 2023 at the earliest. A lot needs to take place in terms of infrastructure and budget for this to come to fruition.

In the past, the BSB Championship has visited Croft, Mallory Park, Rockingham and Mondello Park whilst before 1995 other circuits were also used in the British Championship including Pembrey, Carnaby and Oliver’s Mount, Scarborough.

The TT Circuit Assen is popularly referred to as “The Cathedral” of motorcycling and held a round of the World motorcycle championship every year from the inaugural season in 1949 through to 2019, it’s run only ended by the COVID-19 pandemic in 2020. The original Assen track, however, was first used in 1925 before moving to its current site in 1955 when it measured 4.7-miles and was unique in that the corners were traditionally banked with an extremely grippy surface. The circuit was redesigned again in 2006, undoubtedly losing some of its charm but it has remained one of the most popular venues in the world, so much so that in 2012 it became the first circuit in mainland Europe to host a BSB round, forming a part of the ‘Showdown’. The venue wasn’t visited in 2020 with the reduced calendar caused by the COVID-19 pandemic and has yet to return. 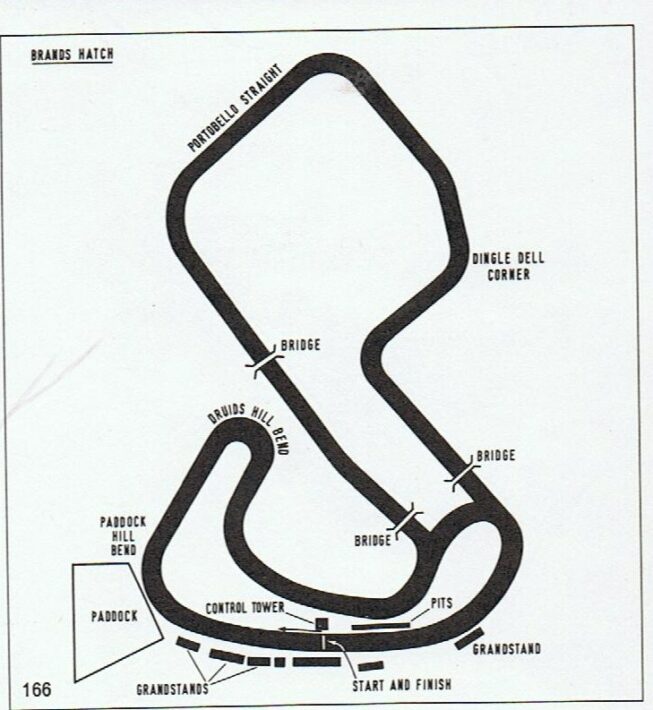 The latter is one of the most thrilling race circuits in the world with constant changes in elevation and high speeds although noise restrictions and the proximity of local residents to the GP loop mean that the number of race meetings held on the extended circuit are limited to just a few per year.

The circuit recently held three BSB rounds a year, one on the Indy course and two on the GP circuit including, traditionally, the final round. However, 2019 saw it revert to two rounds with both of these held on the GP circuit.

Located in the Lincolnshire Wolds, Cadwell Park was established in 1934 by Mr Mansfield 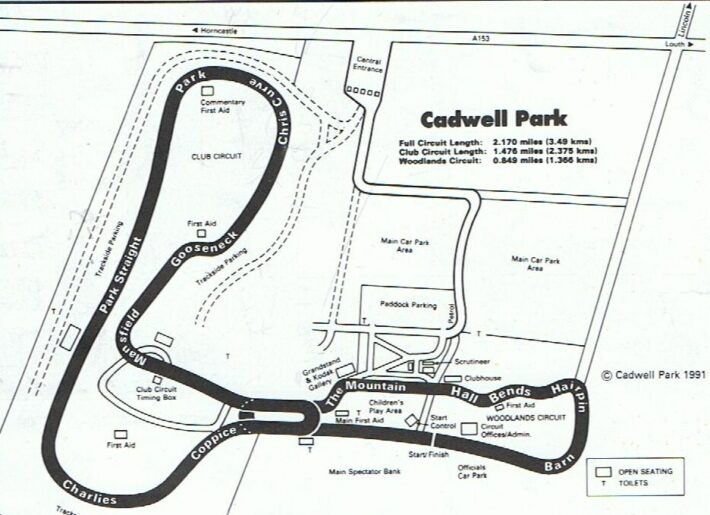 Wilkinson of Louth with the original circuit consisting of gravel-drives of the country estate and measuring just 3/4 miles. Tarmac and concrete were added in 1938 with widening and lengthening in 1953, growing to its current length of 2.25 miles in 1962.

Sited on a steep-sided valley with dips and crests, the circuit features sharp changes in gradient, including the famous Mountain section where bikes can become airborne by up to several feet. It’s tight, narrow and twisty layout has resulted in a number of modifications to be made in order to ensure BSB can still visit the venue but it remains the most popular meeting on the calendar regularly attracting crowds of 40,000. 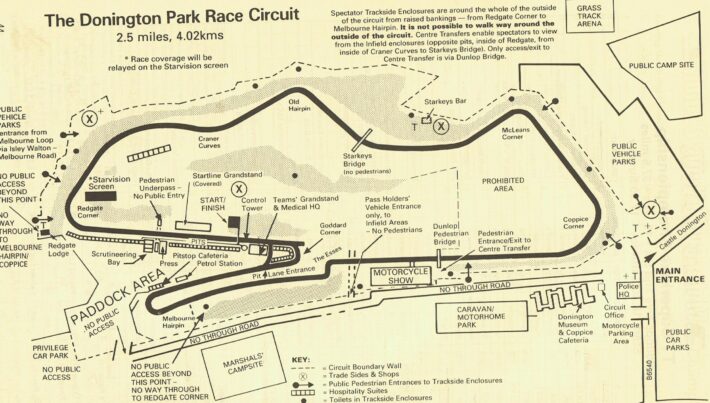 motorbikes. It fell into disrepair after World War 2 but local construction entrepreneur Tom Wheatcroft revived it with the first race back at the track, for motorbikes, taking place in early 1977.

It soon became recognised as one of the UK’s premier venues, a status that was enhanced with the addition of the Melbourne Loop in 1985 which increased its length to 2.5 miles. It has hosted a BSB round every year since 1995 except 2010 when a brief change in ownership resulted in a fall in standards and lack of facilities. Two rounds were held at the circuit in 2019 with the National circuit used for the first time since the late 1990s.

Oulton Park is located near the small village of Little Budworth, Cheshire and hosted 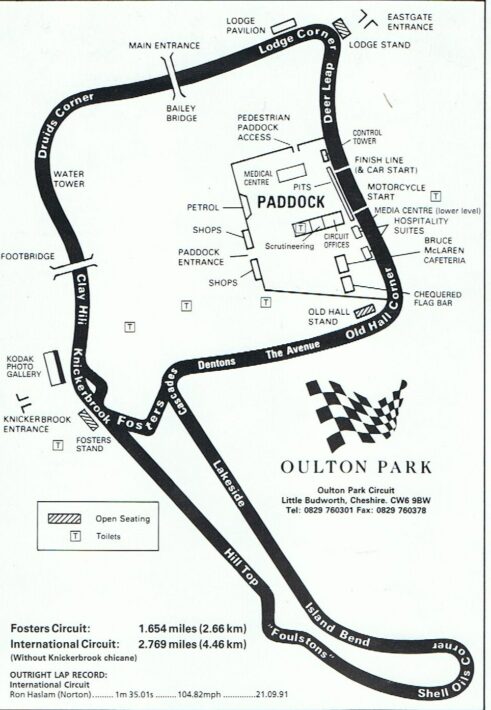 its first motorcycle meeting in 1953. At 2.8 miles in length, the track is characterised by rapidly changing gradients, blind crests and several tight corners and is one of the most popular venues on the calendar both with riders and spectators.

Various improvements and changes have been made to the circuit over the years but it has retained all of its original character and has played host to the BSB series from its inception, now hosting two rounds a year.

Knockhill Racing Circuit is in Fife, Scotland and opened in September 1974, now being Scotland’s national motorsport centre. The circuit was created by joining service roads to a nearby disused mineral railway and has two layouts, the 1.3 miles International layout and the 1 mile National layout.

The former is most traditionally used and the circuit has been constantly developed, hosting a BSB round every year since 1996. Tight and twisty, a lap of Knockhill takes less than fifty seconds. 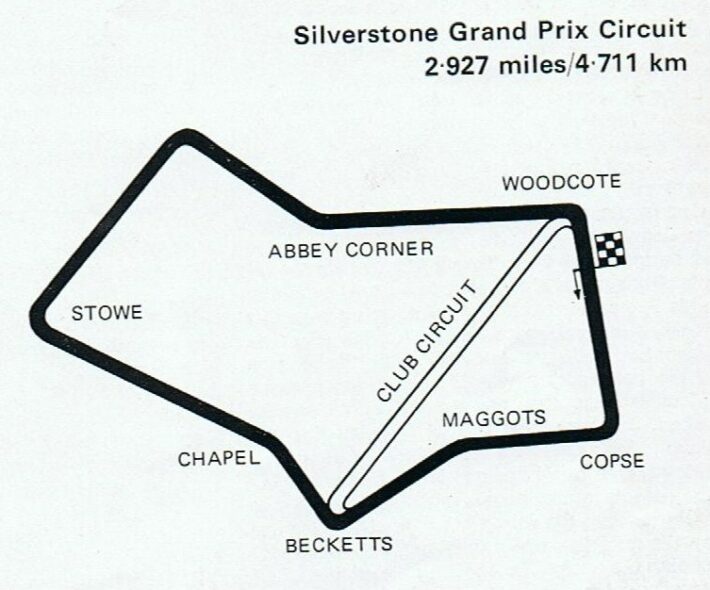 in Northamptonshire was first used for racing in 1947. When the Isle of Man TT no longer became suitable for the British motorcycle Grand Prix, it moved to Silverstone, who had been running a top flight International meeting for a number of years, in 1977.

The circuit hosted the GP until 1986 and was one of the fastest on the calendar with Kenny Roberts’ lap record in 1983 close to an average of 120mph. Changes over the years meant the circuit didn’t always host a British Championship round but by the mid-1990s, its owners were keen to have top flight racing there on a yearly basis and it’s hosted a BSB round from 1996 onwards although only the shorter National circuit has been used since 2018. 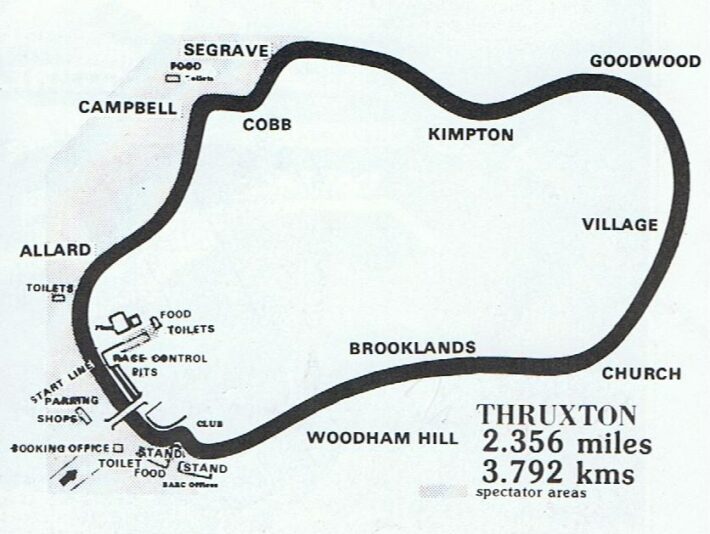 with the British Superbike Championship lap record currently standing at 113.26mph. Originally constructed in 1940 as an RAF airfield, it was first used for motorbike races in 1950 and although it wasn’t a regular choice for British Championship rounds in the 1980s, it has hosted a BSB round every year since 1995.

The 2.3-mile circuit is renowned for being bumpy and abrasive whilst it’s also unique in the fact that only a third of the circuit is accessible to spectators.

Snetterton Circuit is in Norfolk and originally opened in 1953 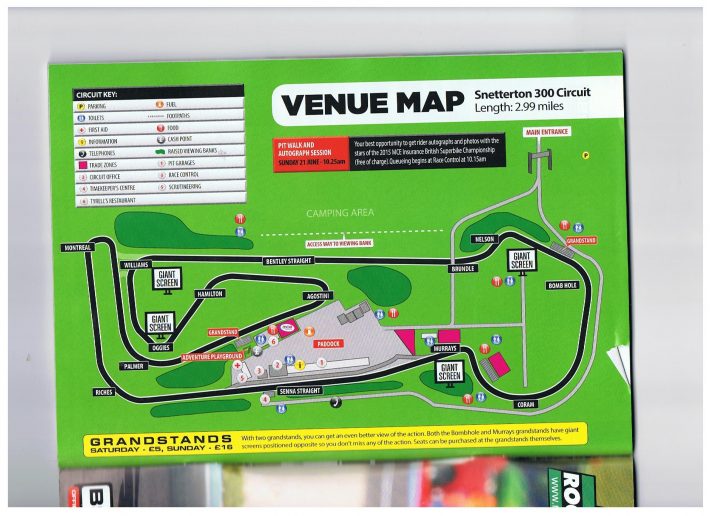 after previously being an RAF airfield. In the 1960s

and was famous for its long back straight and fearsome corners such as the Bombhole and Coram Curve. The final Russell’s chicane underwent various changes over the years but the biggest change came in time for the 2011 season when a new infield section was added creating the ‘Snetterton 300’ circuit. It measures 2.97 miles and is the second longest racing track in the country. It has hosted a BSB round every year since 1996 although some say the recent alterations have removed some of the spectacle away from a circuit that traditionally served up fast, close racing.

The first records of racing at Croft date back to the 1920s, but it was after the Second 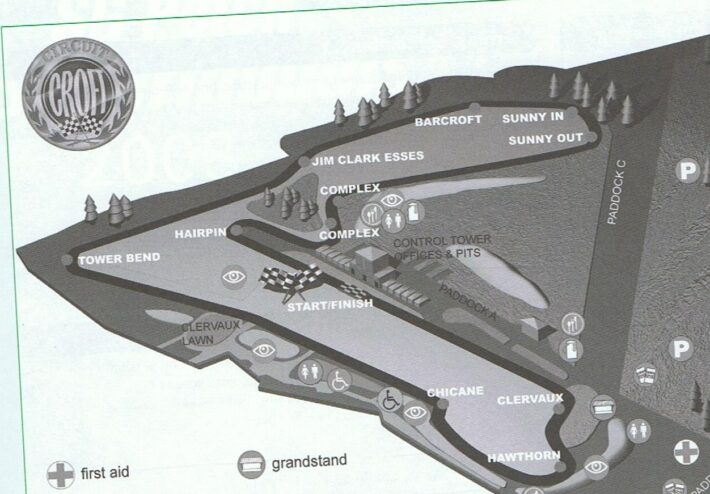 World War that it became a significant motorsport venue. Racing came and went over the years but in 1997 the circuit underwent a major transformation being extended to 2.127 miles and having new pits, paddock complex, control tower and spectator areas constructed.

By 2004, it was back on the British Superbike Championship calendar and was extremely popular with both riders and fans. However, noise restrictions and disputes with locals have seen activity at the circuit restricted heavily and the last BSB meeting there was staged in 2011.

Situated in Leicestershire in Central England, Mallory Park is one of the UK’s oldest 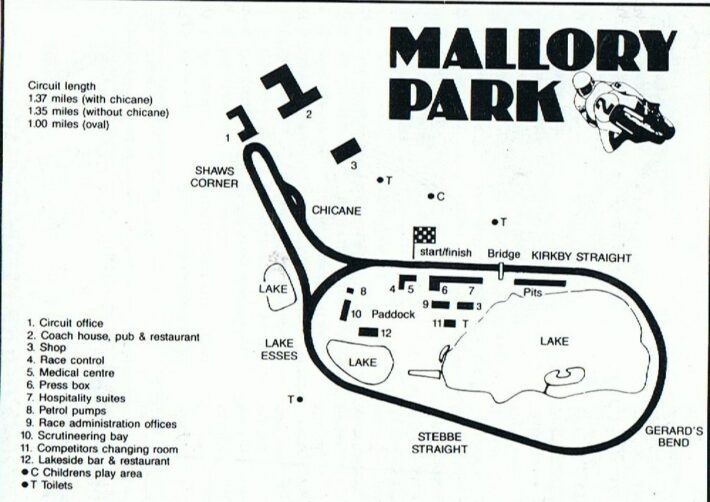 circuits and was a permanent fixture on the British Championship calendar from the 1960s onwards. Despite only being 1.2 miles in length, it was one of the most popular circuits in the UK with its natural banking giving excellent viewing opportunities.

With famous corners like Gerard’s and Devil’s Elbow, safety and infrastructure issues gradually meant it wasn’t viable for top flight racing to be staged there and the introduction of three chicanes over the years complicated an already short lap even further. It last hosted a BSB round in 2010.

Built in 1968, Mondello Park is Ireland’s only international motorsport venue located in County Kildare. Measuring 2.2 miles in length, the circuit had a tight and twisty layout but proved a popular addition to the BSB calendar in 2003, the first time the series had left the mainland.

However, it proved to be a short venture as costs and infrastructure issues meant it was removed after just five years. The circuit continues to hold national status events.

Located in Northamptonshire, the Rockingham Motor Speedway was opened in 2001 and was heralded as the UK’s finest motorsport facility with 13 configurations of track, which can be used for anything from touring cars to motorbikes to rally cars. It featured an oval circuit as well as a more traditional circuit similar to that of Daytona in the USA.

However, although it hosted a BSB round for three years, it wasn’t popular, particularly with race fans who were a long way from the action, and it hasn’t hosted a top flight motorbike race since 2003.

"the lady I spoke to on the phone was brilliant..."