“I had little bikes when I was a kid and after my dad threw me in to some schoolboy motocross meetings – when I was only six or seven – I eventually decided to have a go at road racing. I knew from the age of about ten that I wanted to race at the Isle of Man TT one day so after doing the usual riding on the roads stuff after I’d passed my test, my first meeting was at Aintree in 1990.”

Having worked his way through the club racing ranks, and then contested the inaugural British Superteen Championship in 1991, John moved into 250cc racing and got his big break in 1996 when he signed for Paul Bird Motorsport. A year later, he won his first British Championship race, at Knockhill, and in 1999, he became British Champion on the Vimto Honda.

By then, he’d already begun contesting the International road races with his North West 200 debut coming in 1994 and his first appearance at the Isle of Man TT taking place in 1996 when he took 15th in the 250cc race. His first podium came when he finished third in the 1997 Lightweight 250cc race, also setting the fastest lap of the race on the 250cc PBM Aprilia, and he repeated the result the following year. He didn’t have to wait long for his first win with victory, and a new lap record, coming in the corresponding race in 1999. From that moment on, he was at the forefront of the results on the road races and became one of the greatest riders ever to have competed at the TT.

He was soon victorious at the North West 200 and Macau Grand Prix too with further wins at the TT being taken in 2000 (Singles) and 2003 and 2004 (Supersport 400), and although he took third in the 2001 British Supersport Championship for Castrol Honda, and scored points as a ‘wild card’ in both the 250cc and 500cc British Grands Prix, his career focused more on the roads especially after 2004 when he took his first ‘big bike’ win at the TT, victory and a new outright lap record being taken for Yamaha in the Formula One race.

After taking a Superbike-Senior TT double for Yamaha in 2005, John was signed by Honda for the 2006 season and it started a 12-year relationship that saw him take race win after race win around the Mountain Course as well as hold the outright lap record for a decade.

2006 saw him take a hat-trick of race wins on the Island with victory coming in the Superbike, Senior and Supersport races whilst he also increased his own outright lap record to in excess of 129mph. However, it was the following year that saw him further etch his name into the record books as he not only won the Superbike and Senior races once more, he also became the first rider to break the 130mph barrier on the 37.73-mile circuit with a lap of 130.354mph on the second lap of the Senior.

2008 saw him add another Senior victory to his collection with a Superbike win coming once more in 2009 and although he broke down in that year’s Senior, he improved his own lap record to 131.578mph.

Out of luck in 2010, he was back to his best in 2011 with another Superbike-Senior double, as well as taking podiums in the Superstock and Senior races. Despite the considerable threats posed by Guy Martin, Ian Hutchinson and Michael Dunlop, John was still the King of the Mountain and the man they all had to beat and 2012 saw him claim two more victories, this time in the Superbike and Superstock races. He was now also taking podiums in the TT Zero class.

2013 saw Michael Dunlop take four wins but John was victorious in the closing Senior race having already improved his outright lap record to 131.671mph earlier in the week. He took no less than five podiums that week and although a wrist injury affected his performance on the big bikes in 2014 he did take his first win in the TT Zero class whilst riding the Mugen.

By 2015, many people were saying that Dunlop and Hutchinson had overtaken John in terms of TT prowess and although that year’s initial results suggested that, he took his 22nd TT victory in the TT Zero race and then set yet another new outright lap record, 132.701mph, on his way to winning the Senior of which many people say is his finest win on the Island.

Two more podiums were taken in 2016 to further cement his place as the record holder for the number of TT podiums, which, at the time, was six clear of second placed Joey Dunlop whilst his current tally of 23 wins is the second highest of all time, just three behind Dunlop.

During this period, he was continually taking wins and podiums at the North West 200 and podiums at Macau and although he wasn’t a regular at the Ulster Grand Prix, he still won races there too. However, his 12th year with Honda in 2017 ended abruptly after a crash in practice at the North West 200 left him seriously injured and facing a lengthy spell on the sidelines.

Out of racing for 18 months, he signed to race for Norton in 2018 and although his badly broken leg failed to heal in time, he did return for the Classic TT where he won once more on Roger Winfield’s Paton. He also took 10th place at the Macau GP when riding for Paul Bird’s Ducati team. 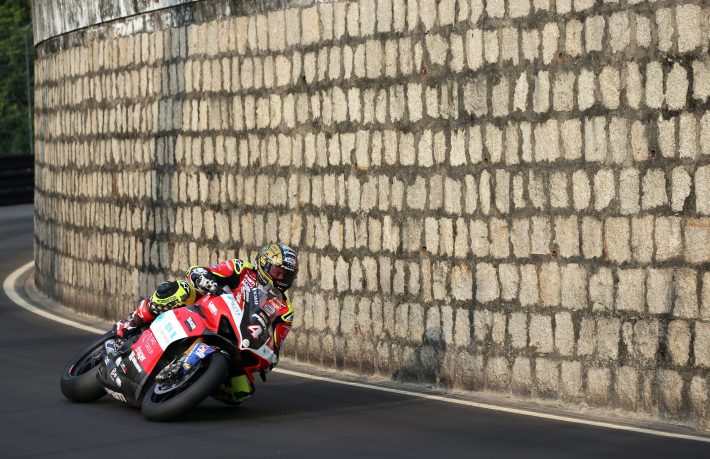 McGuinness returned with Norton for the 2019 season but it proved to be a torrid year as, firstly, the team pursued development with a 1200cc engine which was illegal for use at the North West 200 and Isle of Man TT races and, secondly, they were hit by reliability issues with their 1000cc machine.

Previous seasons had seen the Norton progress in the hands of Aussie pairing David Johnson and Josh Brookes but McGuinness struggled at the North West 200 with 11th in the solitary Superbike race his only result. The bike struggled to complete a lap during practice with the same fate befalling the new Superlight machine which was over 20mph down through the speed traps during qualifying for the Supertwin races.

The poor weather at the TT meant McGuinness was only able to manage a handful of laps during practice when he needed plenty in order to get the bike set up. He retired at the end of the first lap during the Superbike race and only got as far as the Bungalow in the Senior after an engine bolt worked its way loose. He was also an early retirement in the Lightweight race.

He did, however, claim his 47th TT podium in the TT Zero race when a lap of 120.979mph saw him claim second place behind Mugen team-mate Michael Rutter. He was also in action in the two Supersport races for the Milenco by Padgetts Honda team with 15th and 17th place finishes the outcome.

He was back on the island in August for the Classic TT where he won the Senior Classic TT race for the third time on the Winfield Paton before going on to take third overall at the annual Stars at Darley meeting.

He concluded his year once more at the Macau Grand Prix riding, on this occasion, the PBM Ducati that Scott Redding took to victory in the 2019 British Superbike Championship. John was never outside the top four during practice and qualifying lapping the 3.8-mile circuit quicker than ever before to show that, with a competitive machine, he was riding as well as ever.

Unfortunately, he was forced to retire on the warm up lap of the race but although he turns 48 in 2019, he still has the passion and determination to succeed. And having signed for the Quattro Plant Bournemouth Kawasaki team, he has every chance of being back on an international road race podium in 2020.