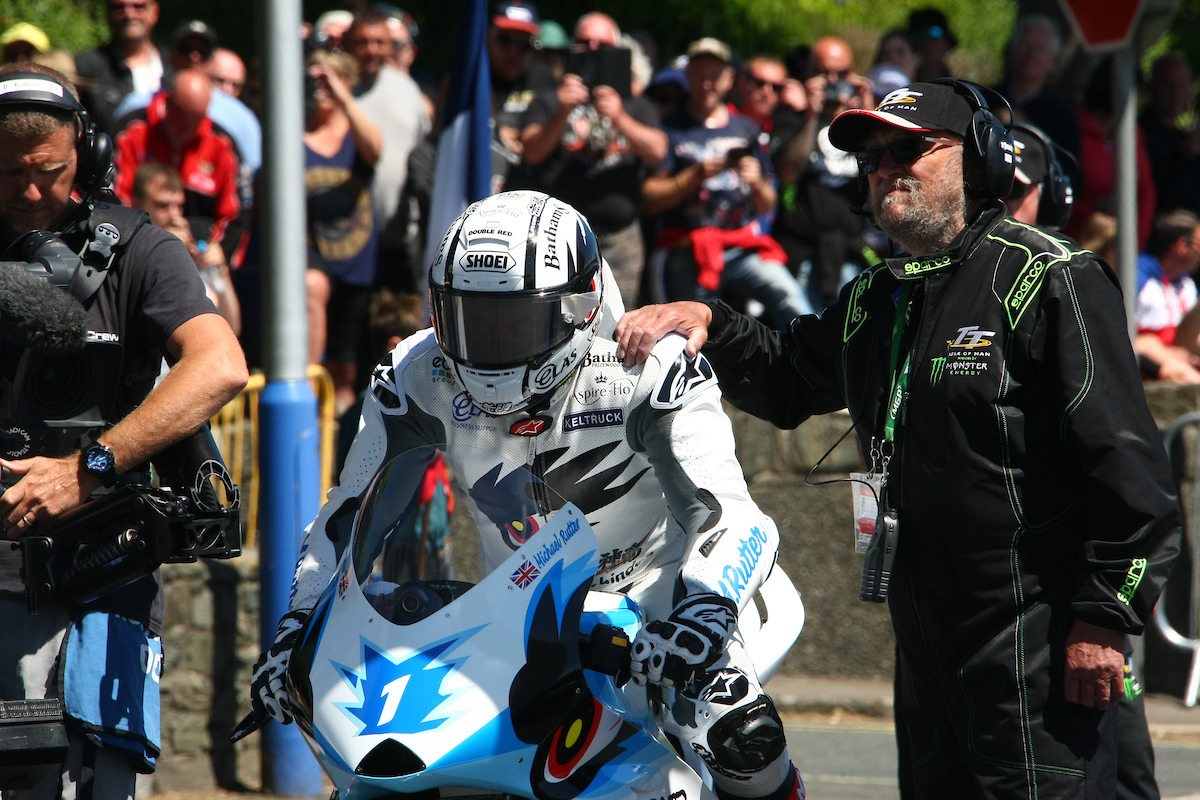 Michael’s racing influence came from his father, Tony Rutter, who was a motorcycle racer in the 1970’s and 80’s, winning 8 TT’s. As well as the TT, Tony won 4 Formula Two World Championships and 9 North West 200 races, whilst he also competed in the 250cc, 350cc and 500cc World Championships as well as being a regular race winner of the various British Championship races during the period.

Come 1993, it was Michael Rutter who was racing competitively in the British Superbike Championship and he took his maiden podium finish on his way to eighth overall. The following two years saw consistent improvement, placing fifth overall in 1994 and fourth in 1995, where he achieved his first BSB race win at Donington Park.

Michael’s first TT appearance came in 1994, where he competed in the Formula One TT finishing 17th on the Medd Honda RC45 and winning a bronze replica  This experience saw Michael kick on in 1995, with an impressive eighth place finish in the Senior TT, as well as 18th in the Junior TT. He didn’t have to wait long for his first podium with third coming in the 1996 Formula One race and he went one better the following year with second in the 1997 Formula One race. He also finished third that year in the Junior race.

It was 1997 when Michael’s road racing career really took off as he won the North West 200 Superbike and Supersport races and achieved 2nd in the TT as previously mentioned. Michael’s first wins at the Macau GP and TT came in 1998, victory coming at the latter in the Junior race after finishing a close second to team-mate Ian Simpson in the Formula One race and third in the Production. 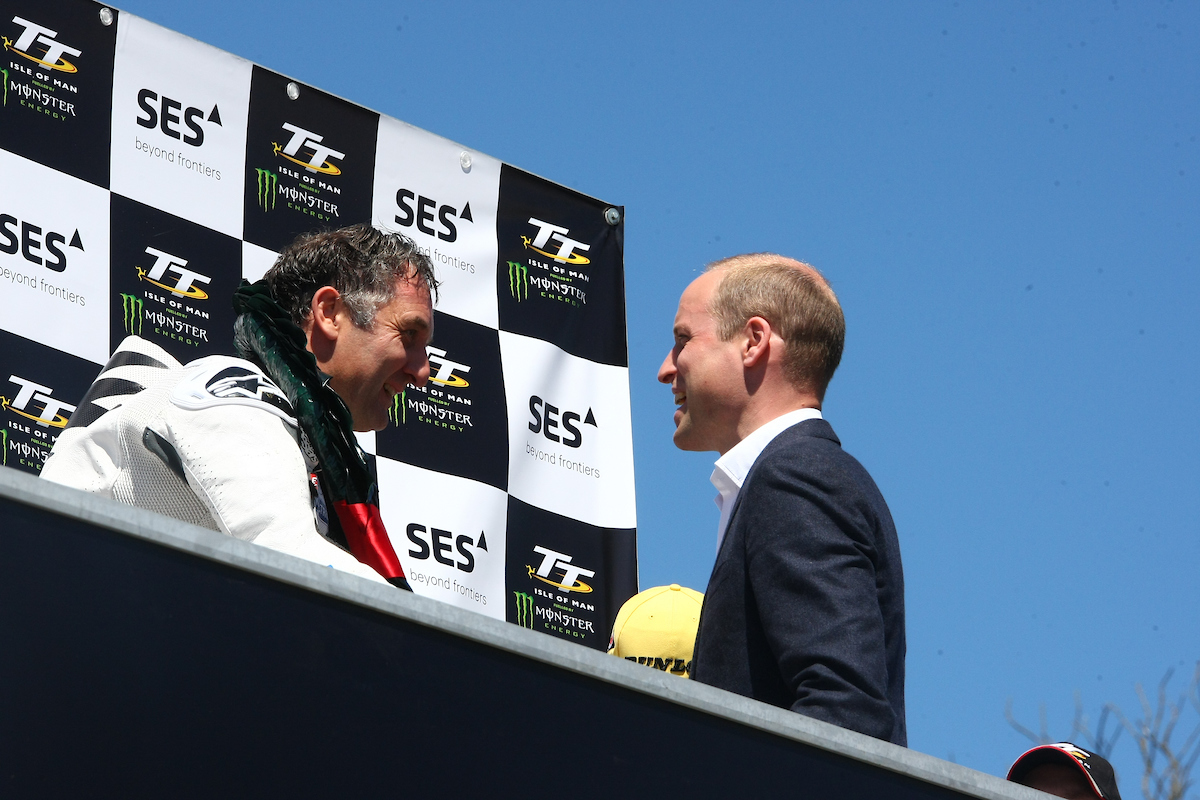 For a racer with such a long and successful career it’s always going to be tough to choose a highlight, especially when you’ve competed in such a range of competitions.

Rutter has been quoted to say his individual highlights would be his first win at the TT, which is always a popular choice. Another highlight of Michael’s was in the 1997 World Superbike Championship meeting at Brands Hatch when he took a brilliant third place, sharing the podium with the legendary Carl Fogarty and John Kocinski.

Winning another 6 TT’s since his first in 1998 is a great achievement, equalling the tally taken by Mick Grant and one behind his dad. Some would say his win in the Lightweight TT in 2017 was one of Michael’s greatest moments, not only because he was competing against riders of a much younger age, but also coming some 19 years after his maiden victory in 1998!

It is not only the TT where Rutter has had incredible success; he holds the third highest amount of race wins at the North West 200 with 14, trailing only to Alastair Seeley (24) and Robert Dunlop (15). He has the second highest number of podiums at the event with 34 having been taken between 1995 and 2019, only Seeley having taken more (36).

Michael also holds the most amount of Macau GP wins for any rider with nine, three more than the next best figure of six held by Ron Haslam. His 20 podiums at the event is also a record. Where BSB is concerned, Rutter has won 28 races with second overall being his best finish in 2002 and 2004 and he’s still competing today in the British Superstock 1000 Championship.

Rutter’s highlight of 2018 came when riding the Mugen machine in the TT Zero race. Michael became the first rider to lap at over 120mph in the Zero race, where he achieved a new lap record at an average 121.824mph in a time of 18:34.956, beating John McGuinness’ record from 2015. Rutter was over 23 seconds ahead of runner-up Daley Mathison and was greeted by none other than Prince William on the podium, this taking Rutter’s TT win tally to an impressive six.

Another highlight of the 2018 Isle of Man TT was his podium finish in the Lightweight race. Coming 3rd on the 2014 Paton S1, Rutter finished only behind Michael Dunlop and Derek McGee whilst he also lapped at 120.946mph for a new personal best in the class. As well as this, Michael placed 5th and 6th in the Superbike TT and Superstock TT races respectively.

At the preceding North West 200, he was as competitive as ever with his 32nd podium at the event coming in the opening Superbike race. He also took fourth in the first Superstock race and 14th in the second, a false neutral entering the Juniper chicane causing him to lose ground and deny him another top five finish. Seventh was the outcome in the feature NW200 Superbike race.

Michael was out of luck in his races at the Classic TT but he finished his road racing year in Macau where he achieved a phenomenal feat of 19 podiums in the 24 years he’s competed in the race. Podium number 19 came on the Moto GP-spec Honda RC213V-S, less than a second behind race winner Peter Hickman with the race being cut short due to red flags after only eight laps of the 3.8 mile circuit.

Once again, Michael competed in selected rounds of the Pirelli National Superstock 1000 Championship and he continued to be extremely competitive claiming pole position at Thruxton and taking a podium finish in the final round at Brands Hatch.

Just like in 2018, Rutter took the top spot on the podium of the TT Zero race, this time beating John McGuinness over the line by just over 8 seconds, with both riding MUGEN bikes. He also broke his own lap record with a speed of 121.909mph helping him take his seventh TT victory.

The experienced rider completed all of the races he competed in, with his lowest finish coming in the Senior TT where he came 7th. Other highlights of this campaign were coming 5th in the Superbike and Lightweight races as well as 6th place in the Superstock TT.

Despite the mixed weather at the preceding North West 200 meeting, Michael was competitive in all classes with a brace of podiums on Ryan Farquhar’s KMR Kawasaki in the two Lightweight races taking his event tally to 34, just two behind Alastair Seeley’s record total of 36. Sixth and seventh place finishes were the outcome in the Superstock and Superbike races.

At the Macau Grand Prix the race was sadly abandoned following two crashes and red flags. At first the result was announced as void but Michael was later awarded the win with a lead of just 0.298 seconds over Peter Hickman. It gave him his ninth Macau GP victory and 20th podium.

"Quick and easy to arrange although did question their fees..."