Thruxton is located in Hampshire England and is the fastest short circuit currently in use in the UK with the British Superbike Championship lap record currently standing at 113.26mph. Originally constructed in 1940 as an RAF airfield, it was first used for motorbike races in 1950 and although race days throughout the year are limited, it provides some of the closest, most exciting racing on the calendar. The 2.3-mile circuit is renowned for being bumpy and abrasive whilst it’s also unique in the fact that only a third of the circuit is accessible to spectators.

Take a full look at Thruxton in action!

Out of the chicane on a flying lap, you’re in second before hooking third as you cross the finish line, bearing in mind you’re on the side of the tyre and on the rev limiter, so you need to be a little bit careful. You drift to the left and peel into Allard, which seems to go on for ever, and hold it in third right the way through before hooking fourth on the exit as you change direction and head up the crest into the Complex. 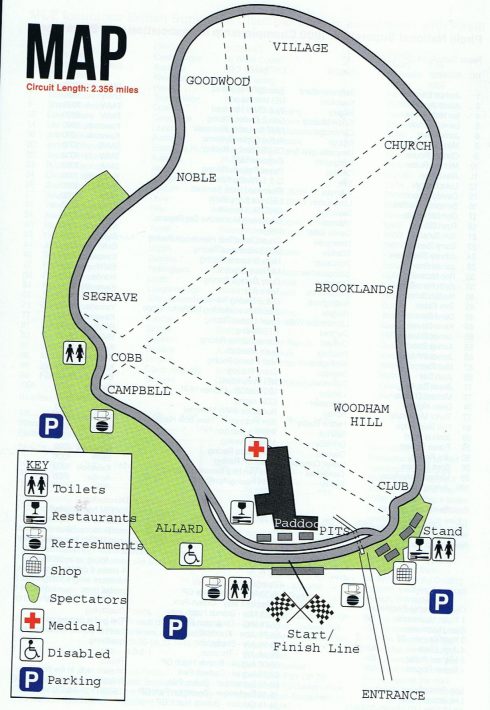 Braking into the Complex is vitally important, as it’s one of the very few places at Thruxton you can make a pass and make it stick. It’s back two gears in rapid succession into the right of Campbell and then it’s a case of defending your line through there, and then especially through the left of Cobb as you drive out.

It’s easy to make a mistake if you rush in too fast, so it’s a case of keeping it smooth. Segrave is the next corner and that’s where the bike starts spinning and sliding as you get on the gas. You short-shift into third and keep a tight line through Noble, just letting the bike behave as it wants…but keeping away from the inside of the track.

This is where the fun really begins as the next sequence of corners is interesting to say the least. They’re all fast and they all lead into one another. Into Goodwood, being careful not to spin up, the track falls away slightly as you hook into fourth and then there’s a bit of a straight into Village. It’s important to get the bike upright and driving on the fat part of the tyre through here and to carry lots of speed as you hit fifth on the run towards Church.

I come back a gear to fourth in order to give myself the best possible drive out of the corner, as this is the most important one on the track and is quite often a race decider. Concentrate hard and try not to lose too much traction for the run up Brooklands Straight. Here, it’s into fifth and then sixth as the Superbikes will be hitting around 190mph on Woodham Hill before going for the brakes – again, it’s a classic passing opportunity into the Club Chicane, as there is no way for the rider in front to defend it.

Brake at the marshal’s hut, then come back through the gearbox to second and it’s follow-my-leader through the chicane before driving hard onto the finish straight for another lap.

"Found the site an easy and straight forward process to..."