Mallory Park is one of the UK’s oldest circuits, with racing having first taken place at the 1.2-mile venue in 1955. With legendary corners like Gerard’s and Devil’s Elbow, it was famous for its annual ‘Race of the Year’, which regularly attracted the world’s best riders and crowds of 50,000, whilst it also played host to the British Championships and Transatlantic Trophy Match races when the lap record was in excess of 100mph.

Racing was limited for a period in the early 1980s before it returned to a full programme of activity in the 1990s and 2000s albeit with a number of chicanes introduced in order to slow speeds around the narrow circuit. Safety concerns, primarily due to the limited availability of land for improving run-off, and infrastructure issues mean it no longer figures on Championship calendars. However, it remains popular with club racers and track day enthusiasts.

Check out Agostini in action during Race of the Year…

Exiting Devil’s Elbow in fourth gear, the rear squats in the dip and the front goes light so the bike’s bucking and weaving along the straight, where you click fifth gear just before the bridge. It’s then down one gear for the entry into Gerard’s where you need to keep a really tight line for Charlie’s Chicane. 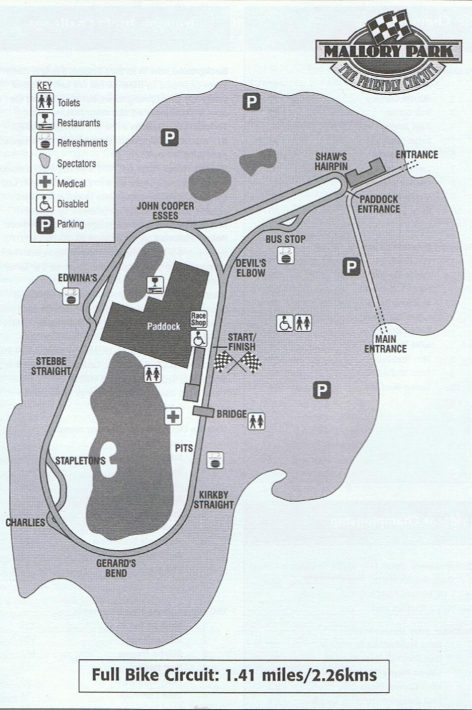 Back down two gears to second for the chicane and it’s real stop-go, 40mph stuff, although the bike feels really nimble as you quickly change direction. On the way out, you’re back up to third along the straight heading towards Edwina’s, where it’s easy to overshoot as you think the straight is longer than it actually is because of the old circuit layout.

It’s back down to second again for Edwina’s and you need to be really careful on the way out as the track surface is really slippery and it’s easy to highside. You short shift through third and fourth through the right-hander, where you’re hanging over the kerb on the inside before flicking it left for the exit of the Esses.

It’s then third gear all the way up to the hairpin, where you need to keep as tight as possible to the right hand side of the track to stop someone from diving up the inside – it’s one of the few opportunities for overtaking. It’s then hard on the brakes and back down to first gear for what must be the tightest hairpin on the planet!

As you exit, the front wheel lifts slightly under power and you click second just before the Bus Stop, rubbing your right shoulder on the wall on the inside and then clipping the kerb on the left on the way out. As you exit the Bus Stop, you drive out in second and then short shift up to fourth again just before going back up to fifth along the start/finish straight.

Some more of the greatest UK circuits...