I don’t think anyone could argue that we are living in fairly interesting times. Wherever you look in the world, mad things are happening. Stuff that you wouldn’t have predicted 20, 10, even five years ago.

Stuff like BMW making a scooter, maybe? Yep; at the turn of this decade, BMW was very much a heavyweight outfit, selling proper, big-bore, hardcore motorcycles. Giant Dakar-ready adventure bikes, six-cylinder mega-tourers, slick naked machines – even world superbike race reps and competition-ready enduros: they were all produced by the Bavarian firm. Where would a single-cylinder automatic scooter fit in there?

Well, here it is – the C400 GT. And with hindsight, you can sort of see the sense it makes. Okay, here in the UK, the scooter segment is still fairly niche: outside metropolitan areas, buying a scooter is still an unconventional choice. But in the rest of Europe, they sell like the proverbial hot cakes. Take a city break in Milan, Paris, Barcelona or Lisbon and you can hardly move for the things. I was in Turin last year, and was genuinely amazed at how many two-wheeled step-thru autos were parked up. Literally hundreds of the buggers lined up at every bike park.

So the market was always there – and with firms like Piaggio, Yamaha and Suzuki all producing high-tech, high-capacity maxi-scooters, the path was pretty clear for BMW. Build a middleweight twin in the 650cc class, plus a smaller 400-class single-cylinder machine, add on some BMW tech and premium brand sex-appeal, then sit back and watch the sales pour in.

And that’s what the firm’s done: the C650 twins covering the full-beans inter-city scoot sector and the C400 singles as the smaller options. With electric versions on the back burner while battery and charger tech catches up, it looks like a solid plan for future two-wheeled city transport.

I’ve got a slightly longer jaunt as my first taste of the C400 GT though. I’ve picked it up from BMW HQ in Farnborough, which is a 35-ish mile motorway jaunt from my gaff. And I’ve just swapped an R1250 GS behemoth for the little scoot, so the change is pretty massive. I throw my backpack under the seat, bolt my phone holder clamp onto the mirror stalk (the bars are all covered with plastic panels) and plug my iPhone into the BMW’s power socket. This is a faff without the right kit: the Cherman engineers insist on using the ‘DIN’ standard 12v power socket rather than the fag-lighter sized socket which everyone else (except Triumph) uses. Luckily I have the correct charger from the lovely folks at Ultimate Addons, get me…

I adapt to the very different riding experience within a mile or so, just in time to slew onto the M3 northbound. A 400 scooter, even a ‘GT’ version, is a very different fish from the 1250 GS, but I’m already fairly satisfied with my new surroundings. The little scoot has the exact same keyless ignition and dashboard as the bigger bike, and this version also includes the useful controller wheel on the left-hand bar grip. The dash itself is fairly austere on the move, with just a large speedo readout and smaller info panels for range and the like. There is a ‘My Vehicle’ display which gives more info, and an ‘urban’ mode with a bar tacho, but I do feel like there’s potential to get more out of the considerable colour screen real estate.

I didn’t get round to the faff of linking my phone and a headset to the dash via Bluetooth – I still prefer having my phone on a bar mount and a direct BT link to some earphones inside my lid for James O’Brien on LBC and Mark E Smith on old John Peel recordings. The BMW setup is a good one though, and if I was sticking to one bike for a while, I’d get stuck in with it. 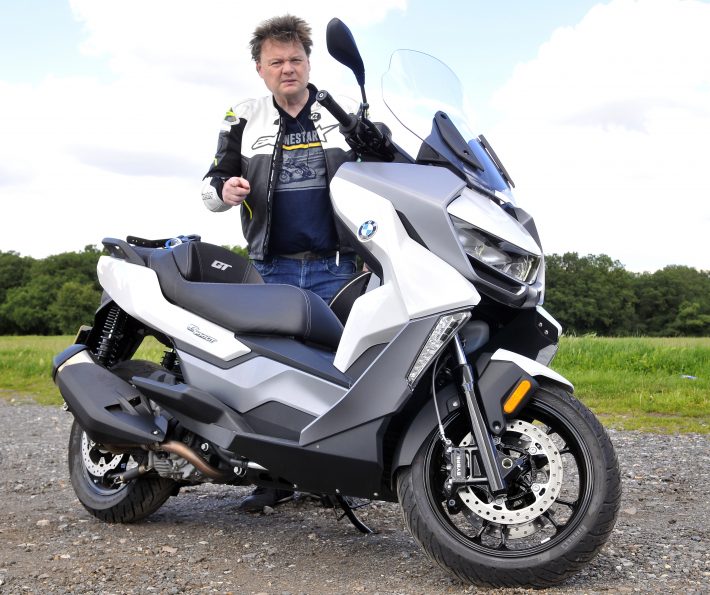 Performance-wise, the C400 engine is pretty decent, especially since it’s only a 350cc single rather than a full 400. The peak power of 34bhp is a respectable enough output, and enough for an indicated 94mph if you really (really) try on a closed private road. Safe cruising around the motorways of the South-East is eminently possible, though you need to pay attention to your mirrors, and plan your overtakes more carefully than on bigger, faster machines. The auto-box is simple and easy, with none of the manual modes or power settings found on some other machines, just a straightforward twist-and-go.

BMW’s worked harder on the chassis than you might expect for a scooter. There’s a stiff steel tube frame, and an aluminium swingarm, which helps keep the weight down to a decent 203kg dry, and loads of isolating mounts to keep engine vibration away from the rider. 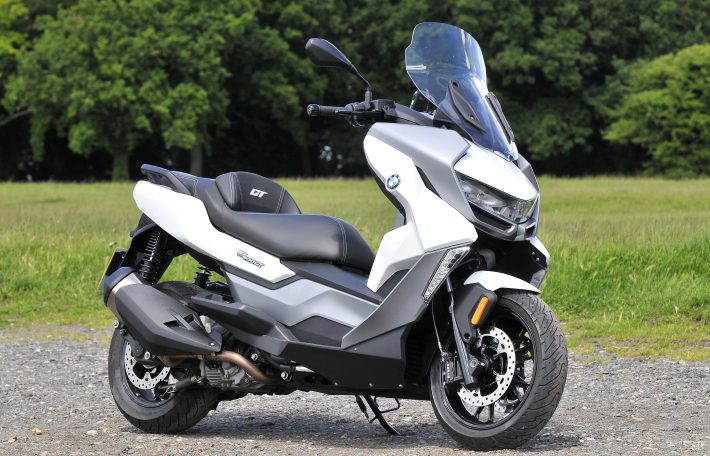 The brakes are very impressive: dual front discs, with four-piston ByBre calipers and a proper ABS system. ByBre is the Indian sub-brand of Brembo, which makes good-quality braking componentry for smaller bikes, and they’ve done a top job here – there’s loads of power and feel from the brakes. As with most scoots, the back brake does a large chunk of the stopping, but the C400’s  front is much better than the class generally offers.

The no-brand suspension is fairly anonymous, and just sits in the background getting on with the job in an accomplished fashion, which is probably as much as most of us need in a scooter. The rear twin shocks have preload adjustment though, so if you regularly carry a pillion, you can dial the springs in to suit.

A TRIP THROUGH TOWN

Through town, the GT is very capable, the lithe bodywork and huge steering lock making mincemeat of the worst jams. Those brakes are awesome at hauling you up when an Addison Lee Ford Galaxy pulls out on you in town, and the sharp steering and decent Pirelli rubber gives the agility and confidence to whistle through mini-roundabouts and one-way systems with panache and style. It’s a proper little urban scrapper, and while it’s not got the cojones to outdrag ‘proper’ motorbikes from a red light, it’ll easily keep ahead of most stuff on four wheels, short of a ludicrous-mode Tesla or a high-end performance car.

Out of the urban schlepp, it’s less amazing, but still works well. We covered the 34bhp engine performance earlier, and it’s just about enough for motorways. The windshield is a bit scant though, and I’d like an adjustable option or even the optional taller screen for sure. The bodywork was fine in the balmy summer conditions I rode in, but I suspect you’d want more protection when the weather turns. The heated seat and grips on this bike would help, but some hand guards and slightly wider leg shields would be even better.

Away from big wide fast highways, the brakes and Pirelli rubber give a pretty good account on twistier back roads. There’s definitely more handling than the engine needs, and you can maintain  a very decent average pace cross country. I rode the C400 to Goodwood for the Festival of Speed, and it coped fine with the 55-mile jaunt down the A3 then across the Sussex backroads. 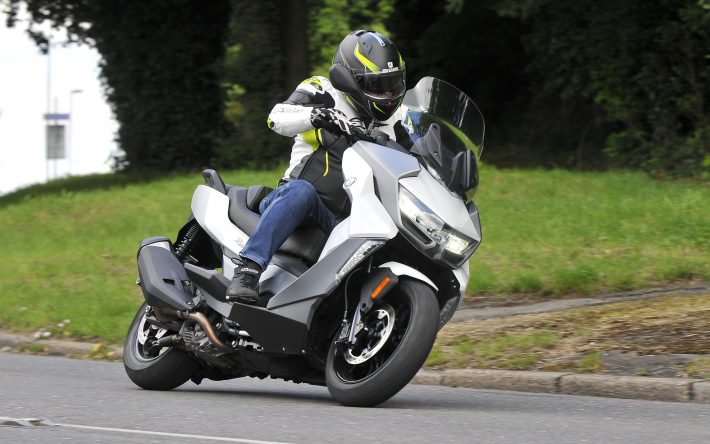 The storage setup is a little on the parsimonious side though. I love scooters mostly because of the carrying capacity – you can load up under the seat with cameras, laptops, extra kit, spare lid, massive locks for London town, and if there’s a top box, so much the better. But the C400 can’t even manage a full face lid under the seat when on the move. There’s a clever ‘solution’ in the form of the ‘Flexcase’ system though – the bottom of the underseat space has a hinged flap, which you can lower down when parked up. That gives enough space for a full face helmet, so you can store your lid with the scooter. But the hinged bottom opens into the space above the rear wheel, so can’t be used when you’re riding, indeed, the engine won’t start with it down. A decent try, but I’d rather they’d just made the space under the seat a bit bigger… 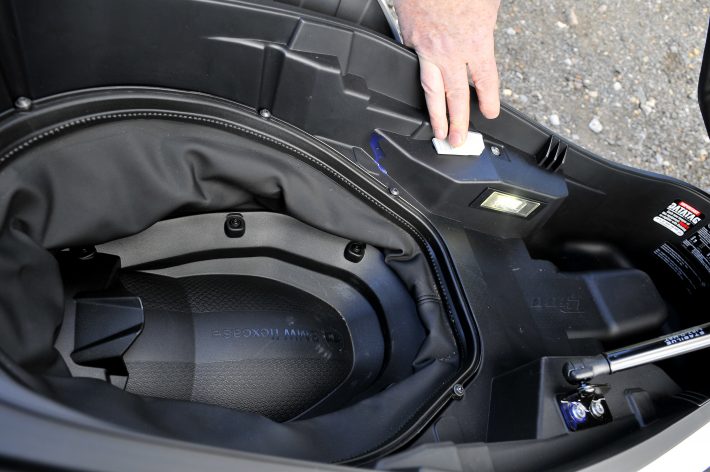 There are two glovebox spaces in the leg shields, and these are handy enough, though again not enormous. The seat, gloveboxes and fuel cap are all centrally-locked via the keyless ignition system, which is pretty cunning, and also means you can’t lock the keys inside the luggage spaces – not that any of us clever types would ever manage that, eh?

So, there you have it. A BMW scooter might seem like madness to 2010-spec Alan, but the 2019 Al was pretty impressed by the C400 GT. It’s not perfect – I’d like the full 400cc engine with the extra few ponies that would bring, plus a larger underseat space and more protective bodywork. But for a 400-class suburban commuter-scooter, it’s got a lot to offer in terms of technology, practicality and performance. 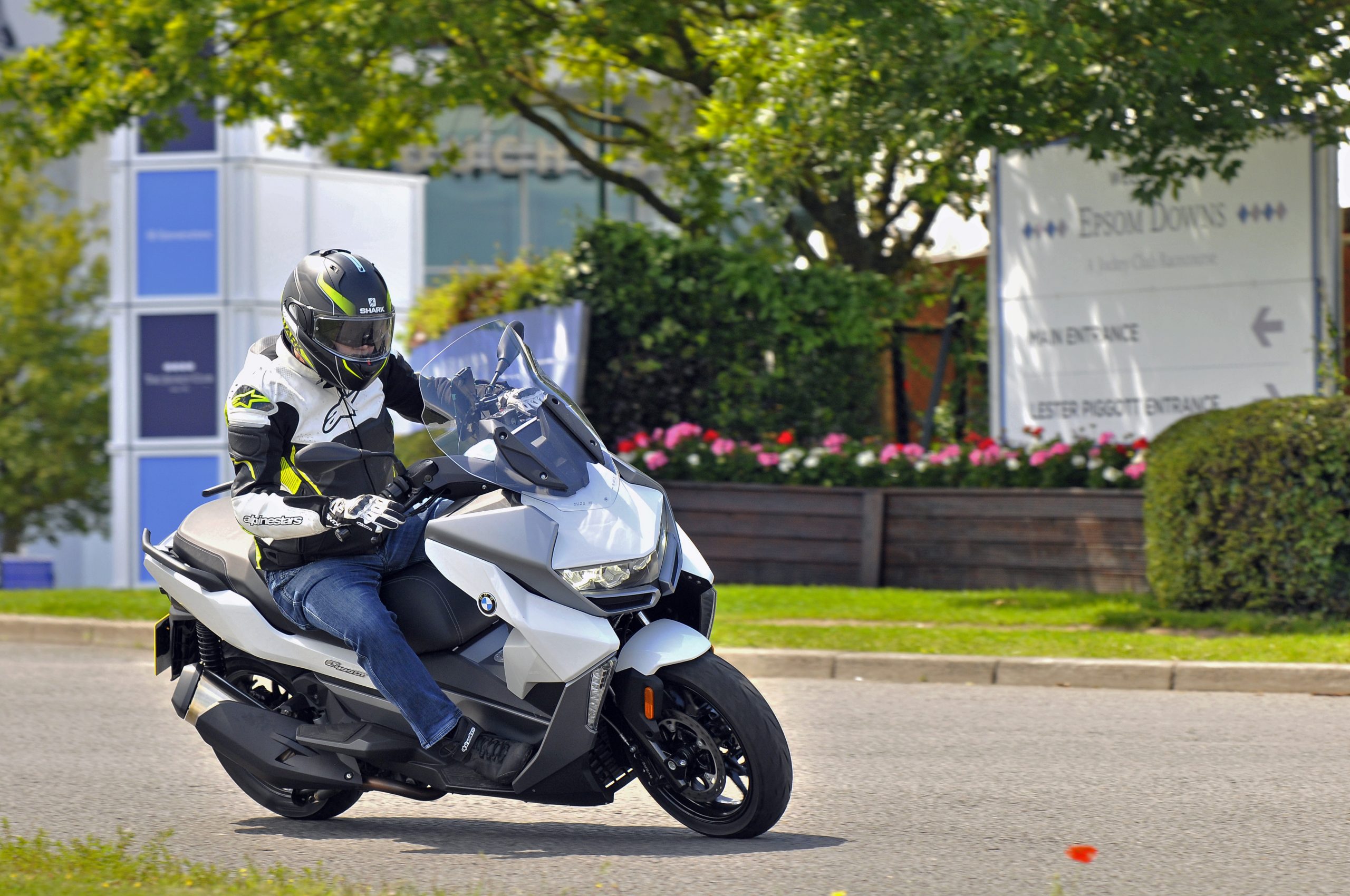 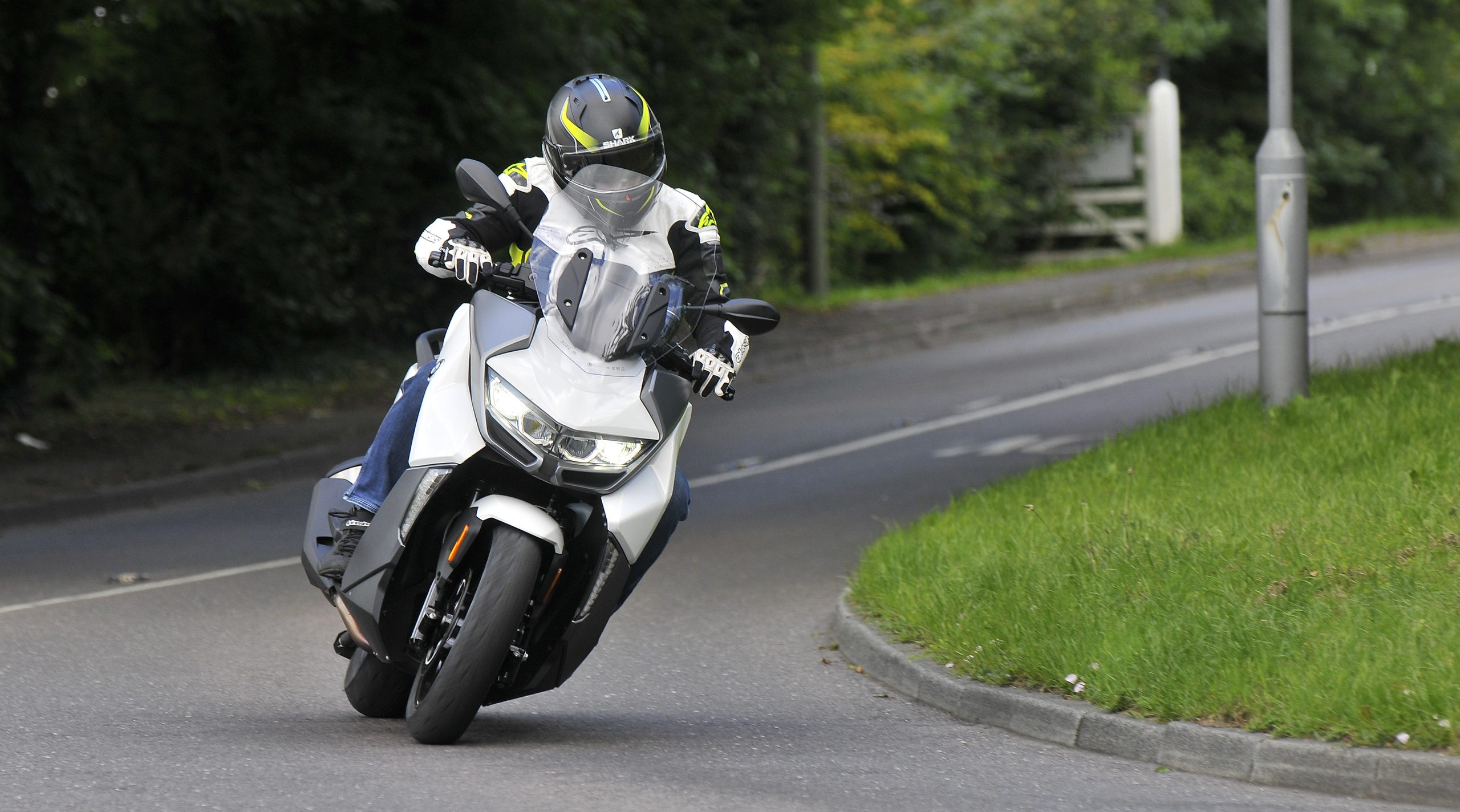 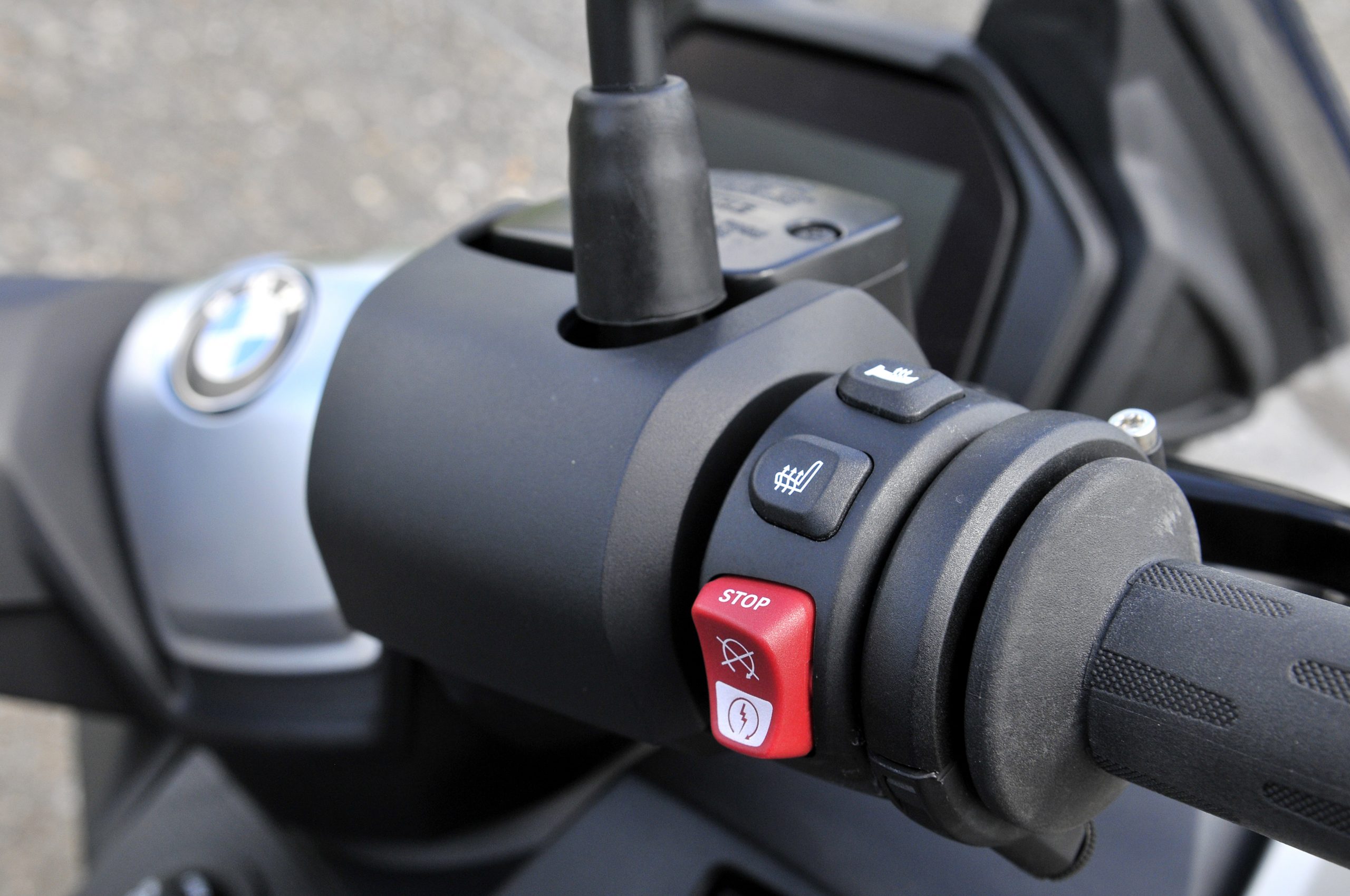 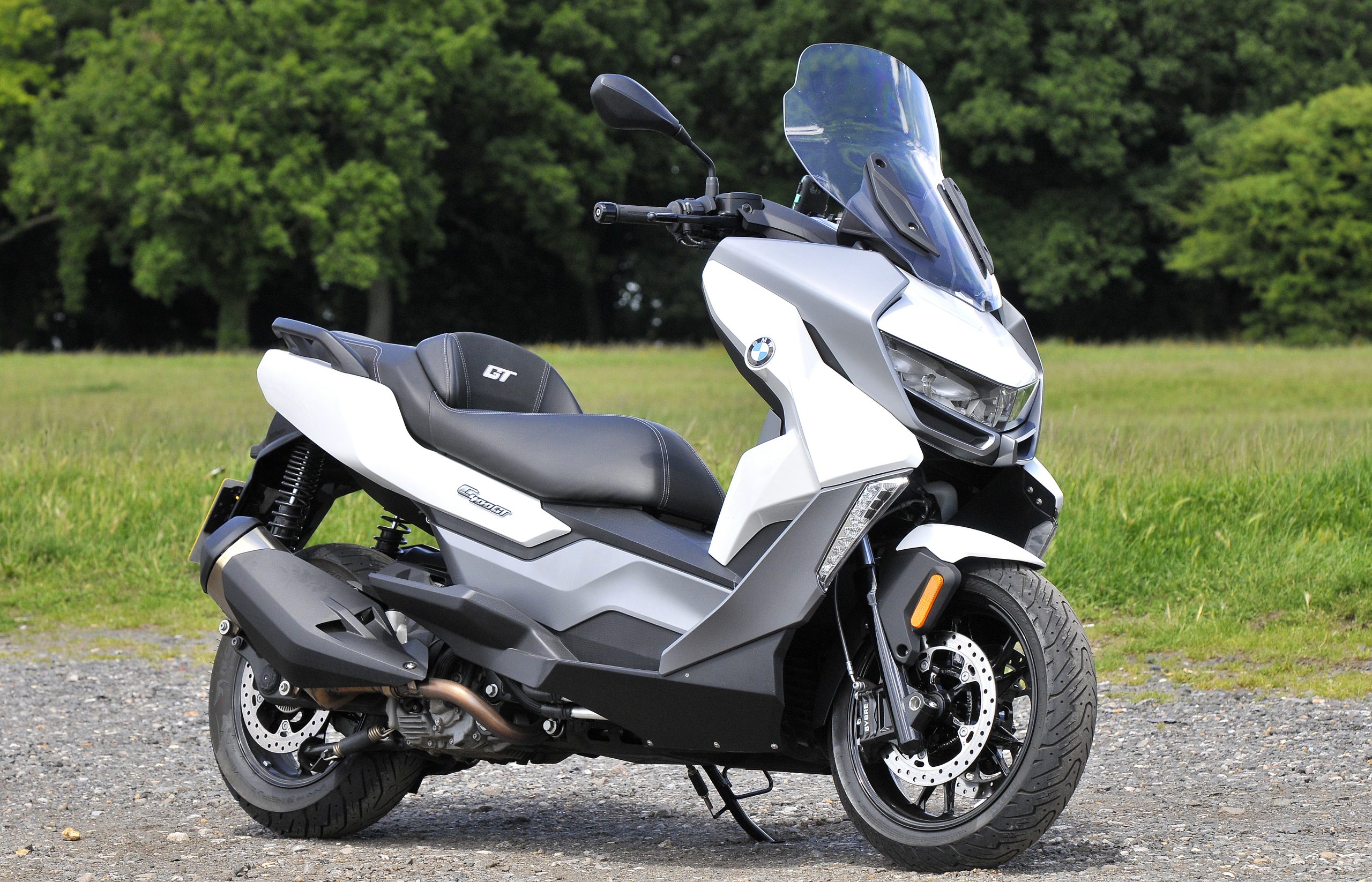 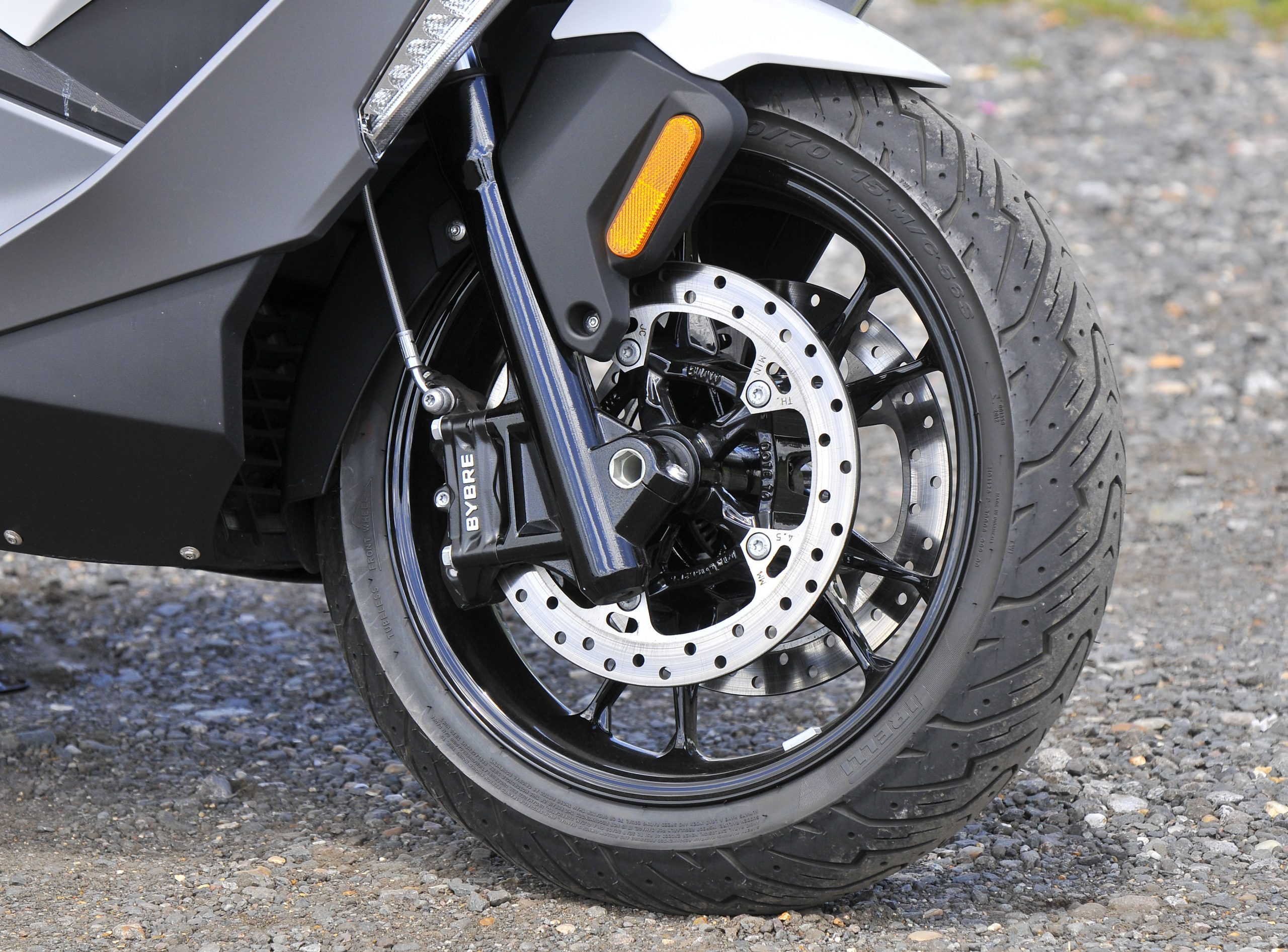 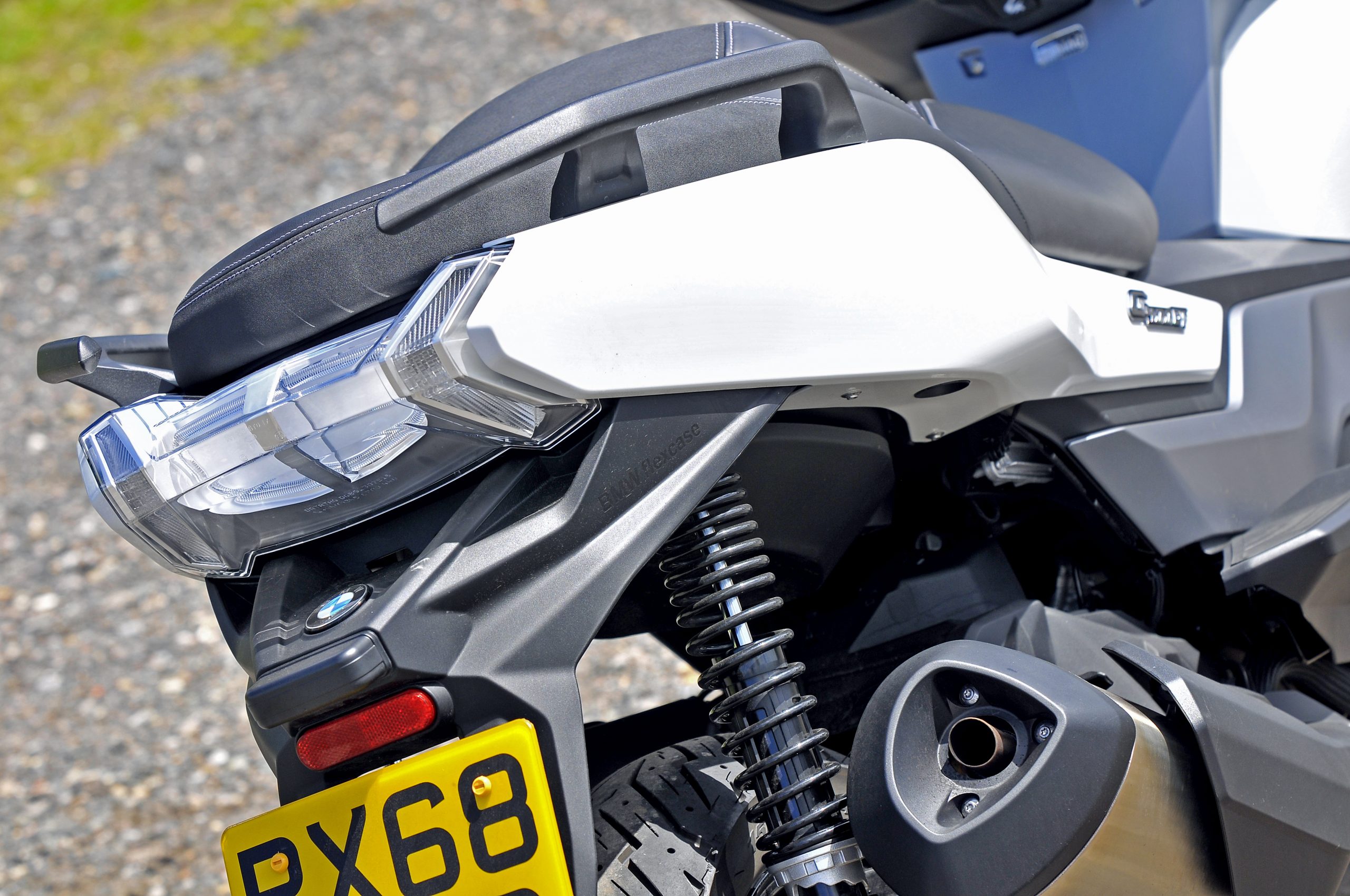 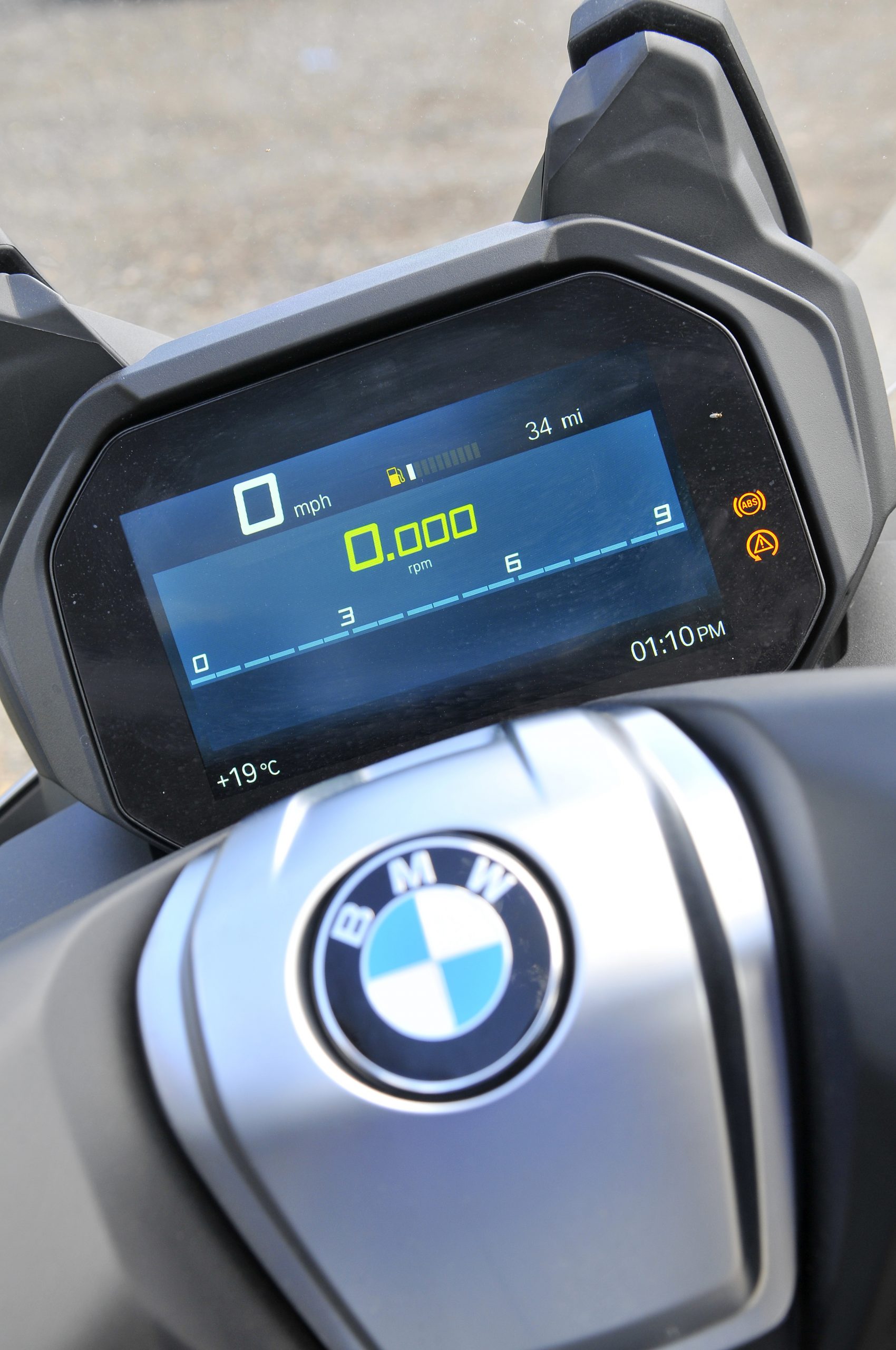 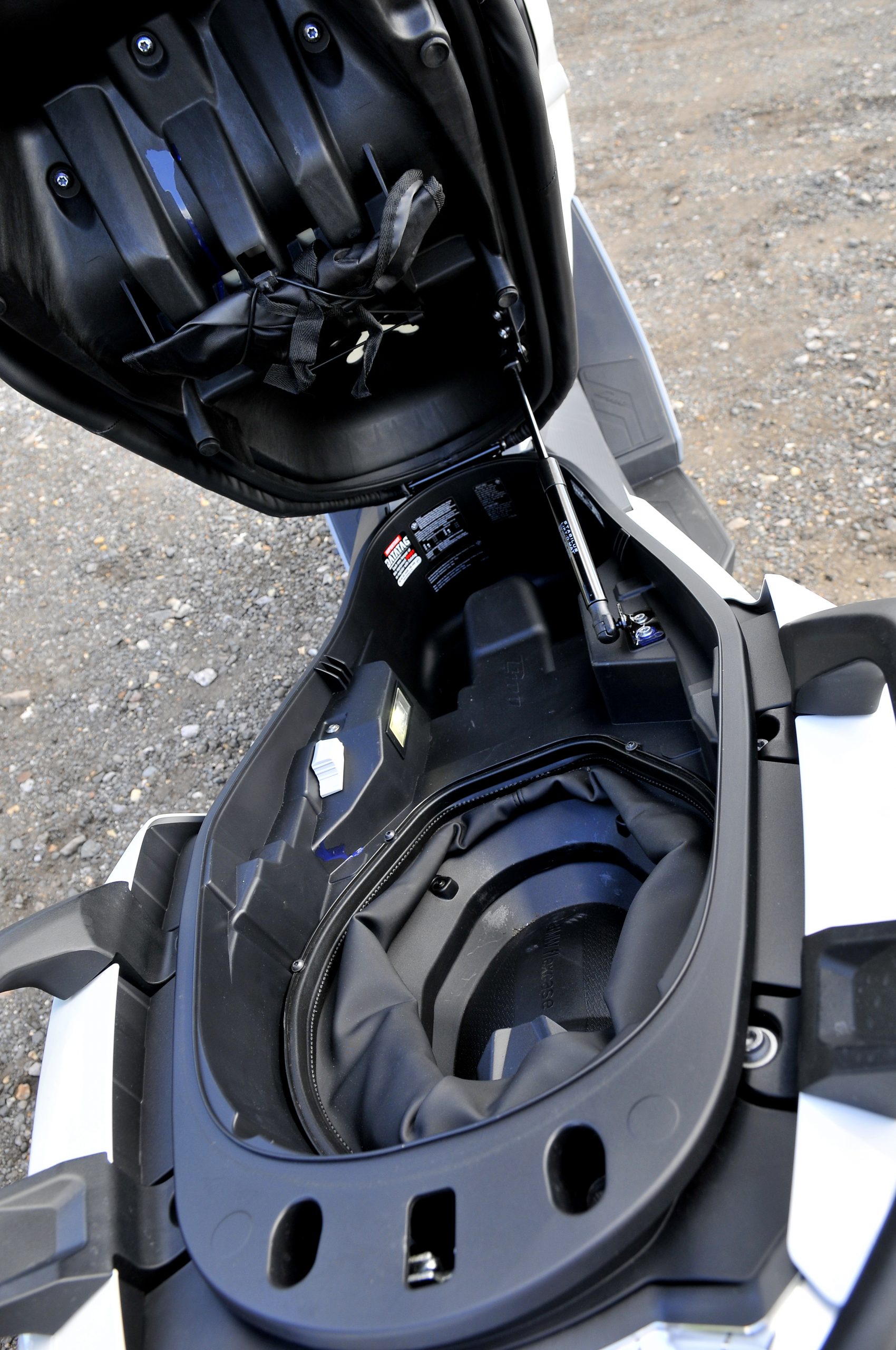 "Very helpful, had a few changes to make to my..."