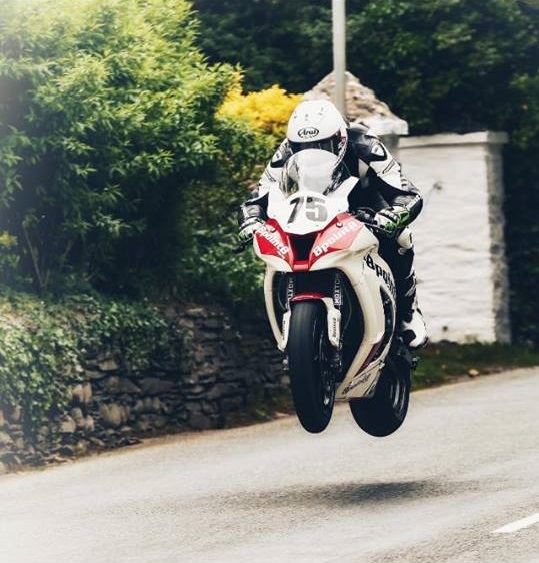 “I’ve always been around motorbikes, starting with trials. I come from a downhill mounting bike background at a pretty decent level. My parents could not afford to help me race, so it wasn’t until I started working that I made the move to start road racing, starting out with Thundersport GB. As soon as I built up the experience and competed at my first road race in 2014 at the Southern 100 that was it. I never looked back.”

“My first race bike was a pre injection Kawasaki ZX6 which I still have!”

“I don’t have idols, but big respect for John McGuinness. I think Steve Plater is a top bloke, good for the sport.”

“My best and most enjoyable race was the 2017 Ulster GP, where I finished 13th in the feature Superbike race.”

As well as the Southern 100, Frank made his Manx GP debut in 2014, finishing 13th in the Junior MGP race on the 2007 Kawasaki ZX6. 75 racers completed this race, with 10 more not finishing, which shows just how impressive a 13th placed finish was.

Frank made his TT debut in 2015 in the Supersport 1 race; however, he did not complete the race. Unfortunately for Gallagher the following year saw another DNF, this time in the Superbike race. This was due to damages to the bike during practice week. Despite these setbacks, his TT career properly kicked on in 2017, coming 41st in the Senior TT when he lapped at just under 120mph, as well as 45th in the Superstock race.

At the 2018 Isle of Man TT Gallagher showed further improvement, finishing 22nd, 27th, and 49th in the Senior, Superstock and Supersport 2 races respectively winning two bronze replicas in two of the three races. The Senior also saw him set a new personal best lap of the Mountain Course at 124.168mph, further proof of his improvements around the 37.73-mile circuit.

The 2019 TT saw Frank Gallagher earn a place in the top 20 of the Senior TT standings with a sensational ride into 20th place with a time of 01:51:54.645. He also improved his personal best lap time to 124.468mph. As well as this, consistent displays in the Supersport TT 1 and Superstock race earned Gallagher two 25th place finishes thus earning him three bronze replicas. Frank also competed in the Supersport TT 2 encounter in which he came 39th.

“The TT mountain course is in a league of its own, but aside from that the Ulster GP for me has it all. Brilliant!”

“Aspirations are to keep going, racing the roads and maybe one day bridge that gap and get in the big, big league. But to do that, I or we (as there is many other talented racers), need money/ backers/ supporters, to progress. I will race as long and as hard as I can.”