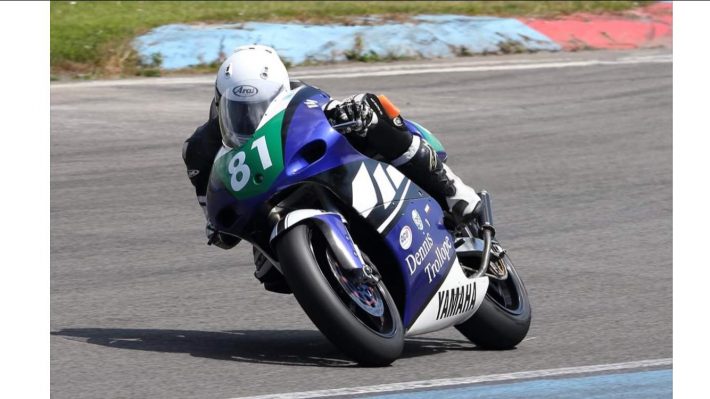 “My first race was at Darley Moor on an Aprilia RS 125. I entered the newcomers race and realised I was also in the 125 race. I was very nervous. Starting racing basically began when I was 14, I’d done abit of motocross and enduro and fancied road racing .”

James Hind first burst onto the road racing scene at the 2018 Manx GP, where, aged just 18, he shined in the Newcomers B race, coming second on his 250cc Yamaha to Michael Rees. In this race Hind was leading at times and was not far off taking the victory, though in the end he was happy with the runner-up spot and looked to build on this going forward.

“My biggest idol was Robert Dunlop, he was so determined.”

“My biggest achievement was coming third at the Classic TT. I’d always dreamed of being on the podium and I finally achieved it on my own bike.”

As previously mentioned, coming runner-up in the Newcomers B Manx GP race in 2018 was the breakthrough moment for Hind and he has been one to watch since that moment.

If the 2018 Manx GP got Hind recognised, then the 2019 Classic TT and Manx GP was when he really established himself in the road racing scene. Competing in the Lightweight Classic TT, a race with well-known TT racers and legends including Bruce Anstey and Jamie Coward, Hind looked right at home, not fazed by the competition in the slightest.

Hind looked to be the one that could challenge Anstey for the win in the first lap as he slotted into second place with an opening lap of 115.302mph on the Dennis Trollope Racing-backed Yamaha; however, a slow pit stop when the filler cap refused to go in and then a 30-second pit-lane speed penalty saw him slip down the leader board to ninth.

However, an amazing effort over the next two laps – particularly the third and final lap when he recorded a speed of 116.601mph – saw him climb all the way back up to third place to claim the final place on the podium. The 19-year-old was only beaten by Anstey and Davey Todd, two well established names on the Isle of Man, to be in this company was a great feat for Hind.

On his debut in 2018, James lapped the Mountain Course at 109.127mph so the Classic TT result more than showed the improvements made but in the 2019 Junior Manx GP race two days after his Classic TT podium, he set a new lap record on his Yamaha R6 from a standing start, with a stunning speed of 121.773mph. Unfortunately, this amazing start was in vain as his 11 second lead over eventual race winner Nathan Harrison was taken from him as he was forced out in the second lap at Greeba Bridge.

This would only motivate Hind going into the Lightweight Manx GP 2019 race that evening. The first lap of this race showed he meant business, with a speed of 115.20mph in the starting lap, followed by 116.453mph in lap 2. Riding his Yamaha TZ250, the teenager from Market Rasen went on to win the race in great style. A lead of 28.6 seconds saw Hind take his first Manx win and make amends for the disappointment earlier in the day.

Two days later, he lined up for the second Lightweight Manx GP race which followed a similar pattern to the day before as he again saw off the challenge of Paton-mounted Francesco Curinga. With a fastest lap this time of 116.190mph, James got the victory on this occasion by 11.75s. That proved to be his final result of the week as he was forced to retire from the Senior race when again in contention for the win.

Later in the season, James clinched the ACU 250GP Championship after taking 13 wins from 16 starts, ending the season with eight victories in a row, and he also took part in the HEL Performance British Motostar Championship round at Donington Park, taking solid finishes of sixth and seventh in the Standard class.

“My favourite short circuit track is Cadwell. It’s very flowing and also stop-start – and it’s nearly on my door step!”

“My aspiration for the future is to just keep on improving on what I’ve done so far. Get faster and more consistent.”