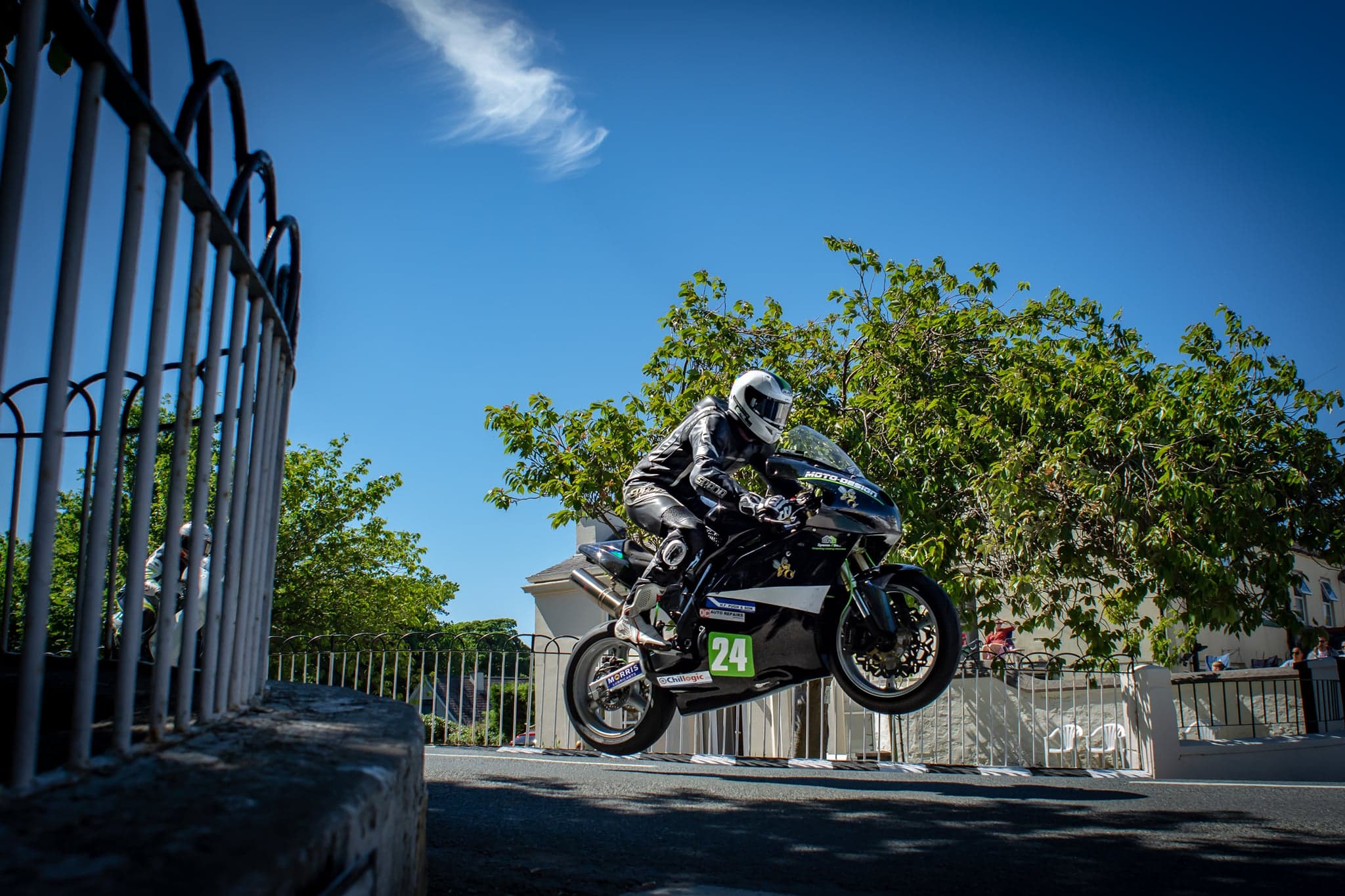 “I started racing in 2011 after years of riding Trials and British Enduro Championship.”

Barry first competed at the Isle of Man in the 2014 Manx Grand Prix, when he finished second in the Newcomers B race before unfortunately retiring in the Super Twin race.

“Michael Rutter, I like the way he works and he’s still getting better after all the years he’s been riding.”

“Competing in the Senior TT with a respectable 26th.”

Barry competed in the Manx GP in 2014 and 2015. As previously mentioned, a 2nd place finish in the Newcomers B race is Furber’s highest finish on the Isle of Man Mountain Course. 2015 saw Barry compete in the MGP Super Twin race whereby he recorded a fourth place finish. Those two years at the Manx Grand Prix more than proved his potential and moving quickly up to the TT has already paid dividends.

2016 was the first time Barry competed in the TT, with his highest finish again coming in the Lightweight race where he placed 13th but he also placed 30th and 38th in  the two Supersport races and won three bronze replicas to complete a more than solid TT debut.

Having made such a strong impression at the TT, Barry returned in 2017 forsaking the Supersport races in favour of running a 1000cc ZX-10 Kawasaki R in the Superbike, Superstock and Senior races.

It proved to be a good choice as he won three more bronze replicas and increased his lap speeds considerably as he broke the 120mph barrier for the first time. The Senior race gave him his best result on the 1000cc capacity machine where he finished 26th and lapped at 123.483mph whilst he also finished 32nd and 34th in the Superstock and Superbike races. His best finish again came in the Lightweight TT race where he improved to 11th, his best TT finish to date.

The 2017 North West 200 was also successful for Barry with his highest finish coming in the John M Paterson Supertwin race, where he placed 8th in a race won by his racing icon, Michael Rutter. He also took a creditable 15th in the Vauxhall Supertwin race to make it a more than solid debut at the event.

Furber featured at the TT for the third consecutive year in 2018, where he again shone in the Lightweight TT, this time finishing in 12th place on Suzuki, increasing his personal best lap speed in the class to 114.595mph. Competing on a 2014 Kawasaki ZX10R in the Superbike, Superstock and Senior races Barry had a very consistent year. The Superbike race saw him finish 28th, following this up with 31st in the Superstock and 30th in the Senior race with the latter seeing him finish his 11th TT race in 11 starts, winning ten bronze replicas in the process.

Other highlights for Furber in 2018 were making his debut at the Southern 100 where he came runner-up in the Corlett’s Trophies 600/1000 B race, just under 0.13 seconds behind winner Paul Gartland and finished eighth and ninth in the two Lightweight races. He also finished 16th in the feature Championship race where he lapped at 105.036mph which was an impressive speed indeed for a circuit newcomer.

Barry also enjoyed a solid first time appearance at the Ulster Grand Prix with 12th in the Lightweight race and a lap of 123.207mph in the Superstock race the highlights. Barry also won two Super Twin races at the first Wirral 100 Anglesey meeting of the season.

Furber began 2019 by competing at the Wirral 100 in Anglesey, where he piloted his teams Kawasaki and Honda bikes and impressed on the road. Barry finished in the top 12 on three occasions and didn’t finish any lower than 15th in any races at the meeting.

Opting out of the North West 200, Barry then headed to the Isle of Man with his best finish coming once more in the Lightweight TT race, where he placed 21st for yet another bronze replica. In the Senior TT Barry achieved 34th and the Superstock race saw him cross the line in 47th place although he was out of luck in the two Supersport and Superbike races, retiring in all three.

Barry returned to the island for the Southern 100 where he finished 20th in the Senior race and also took a brace of 26th’s in the Supersport races.

At the Ulster Grand Prix, Furber’s best finish came in the feature Superbike race when he took a fine 14th place, backing this up with 18th and 26th in the other two Superbike races. He was forced to retire from the Supersport races but took his fourth finish of the meeting with 20th place in the Superstock encounter.