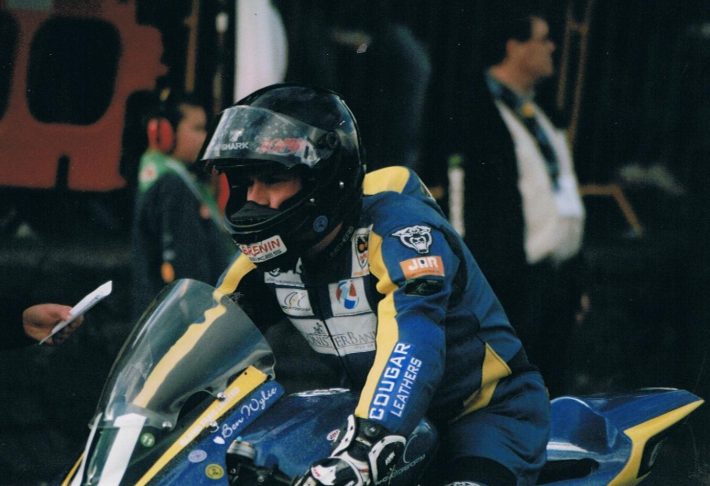 “I was bought up with bikes, my parents were in the motorcycle industry and I did of lot of trials riding as a kid. When I was 16 and had a road bike I was having a bit too much fun! I walked into the bike shop one day and there was a 125 Race bike there for me. My mum said I’ll support you going racing but not riding on the road and you’re not doing the TT! That went as she’d hoped obviously…”

Ben’s racing career started in the Aprilia Superteen Series in 2000, where he came 13th. Following this he competed in the British Junior Superstock Championship for two consecutive years.

“My first bike was a Yamaha PW50 at the age of 5, I bought one for my daughter a few years back and they are exactly the same as they were way back then.”

“Kevin Schwantz was always my hero.”

“I think going to the TT in 2011 with just a 600 that me and some mates built in my garage, using every credit card I could get my hands on, and finishing 7th and 8th and top privateer in both races is what I’m most pleased with.”

His first TT appearance came in 2009, where he finished in all five of the races he entered. His highest finish was in the Senior TT where he placed 25th, in a race won by Ian Hutchinson whilst he also finished 29th in the first Supersport race, 30th in the Superbike, 33rd in the Superstock and 40th in the second Supersport race. He won three bronze replicas and also the coveted Newcomers Trophy.

His other and most recent top 10 appearance was in 2013 in the Superstock race, 10th place in a race won by Michael Dunlop was the outcome.

He sat out the 2018 TT but was back in action around the Mountain Course for the Classic TT although he was forced to retire on his 750cc Bimota. At the Macau Grand Prix, a spill towards the end of the race, after a coming together with Phil Crowe, left him with a number of injuries but he’s now well on the way to a full recovery and hopes to be back racing in 2019.

“The TT can’t really come into this question as it’s in its own category. It’s the best thing in the world. I think ignoring the TT I’d say Macau.”

Career achievements – at a glance: