On the outside it’s a piece of subtle moto-noir art. But imprisoned inside that Scandi shell is a bright orange hooligan. What’s the true nature of the Husqvarna Svartpilen?

Ok, Husqvarna isn’t really a Scandinavian bike maker anymore. Indeed, it’s been a long time since it was – the motorcycle division of the original Swedish gun, chainsaw and bike firm was taken over by the Italian Cagiva group in 1987, before being sold to BMW twenty years later in 2007. Just six years on, the Bavarians changed their minds, and Husqvarna was picked up by KTM’s parent firm in Austria, then transferred to KTM itself.

Cagiva and BMW had tried to run the brand as their ‘extreme’ off-road marque, using the undoubted Husqvarna heritage earned in the world of motocross and enduro. Neither firm had massive success though with that though, and the Husky brand has been a little neglected in modern times.

No more though. KTM is an extremely serious, well-run outfit, and it makes some stunning bikes. In addition, the orange team from Austria has more than enough ‘extreme’ off-road chops of its own, so doesn’t really need to ghetto-ise brand ‘H’. Instead, the Mattighofen moto-masters are tweaking the Husqvarna proposition a little – using the very solid foundations of KTM’s excellent motorcycles, with a twist.

Which is what we have here – the 2019 Husqvarna Svartpilen 701. It’s the fourth new roadster from the firm in the past few years, following the 401 Svartpilen and Vitpilen, and the 701 Vitpilen. ‘Pilen’ means arrow in Swedish, ‘svart’ means black and ‘vit’ means, yes, white. So now we have the white arrows and the black arrows, in 401 and 701 forms. The 401s are based on the KTM 390 Duke, while the 701 models use the 690 Duke as a foundation. The Vitpilens have low clip-on bars, and café-racer styling, while the Svartpilens have wider bars, more upright riding positions, and more of a dirt-track, scrambler feel to them.

It’s certainly a striking little brute. When it rolls out of the delivery van, I’m impressed by the finish and the looks. It’s not a beauty in the mould of a Ducati 916 or an MV Agusta F4 of course – but it’s definitely had a lot of effort put into the design. The lines of the sidepanels, the matt-black logoed silencer, that numberplate holder and the sight lines from the steering head through to the pillion seat; it all gives the feel of something that’s had plenty of attention from an art school graduate wearing extremely fancy glasses.

It’s a bit spoiled by dull necessity though: the engine area is a mess, with the right hand side of the cylinder head area criss-crossed by cables, hoses, sensors and a big plug-top coil all crammed into the small space between the frame trellises. The 701 might look like something from a Notting Hill art gallery, but its foundations are clearly from a proper high-performance bike factory…

I get kitted up and head out for a quick ride. The high-quality impression continues the more you look – the cast alloy wheels are sweet, with little Husqvarna logos cast-in, and the fuel cap is almost worth the entrance fee alone, nicely anodised, chunky, satisfying. The fat bars wear another Svartpilen tag, and the top-notch WP suspension complements the proper externally-ribbed alloy swingarm a treat. The seat looks like a plank, but is firmly supportive, and much comfier than it looks. 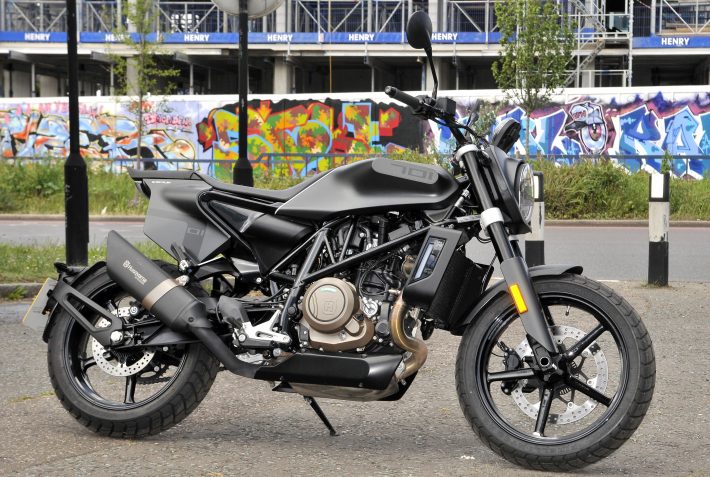 Heart of a motocrosser

It’s not all gravy though: the black silencer design is already catching scuffs from rider’s heels, the switchgear is a bit on the cheap side, and the LCD clock is also a bit small and uninspiring. Having to reach up to the clocks to press buttons is a bit low-tech, and I’d like proper handlebar controls for the display and the other settings on a bike of this cost and class.

That all falls away when I get going though. The Duke 690 engine which powers this beastie is a corker, and has to be a contender for the best single cylinder engine ever. It’s smooth for a one-potter, thanks to extensive balancing (two shafts, one in the head one on the bottom end), and is properly strong. A claimed 75bhp from 693cc makes it the most powerful single you can buy, and equals 108bhp/litre. That isn’t an amazing outright specific power output for a multi-cylinder engine – current inline-fours make over 200bhp/litre – but for a single, it’s remarkable. Indeed, it’s a higher output than the mythical Honda CR500 two-stroke motocross engine manages – with around 53bhp from the big stroker, meaning 106bhp/litre.

So our fancy-pants hipster wheels actually has the heart of a full-bore motocrosser? Well, kinda sorta, but it’s very civilised too. Through town, there’s instant drive when you need it, although you do need to pay attention to gear selection and revs. Sit in top and slow down too much, and you’ll get some nasty juddering when you open the gas, so you soon learn to change down when your speed drops. That’s helped by a slick gearchange and good quickshifter setup, and the overall powertrain experience is a good one all round.

Get out onto more open roads, and the Svart is if anything even better. It’s super-skinny, and once you tuck down a bit into the breeze, the top-end power is a blast. The motor picks up just where my old-skool single-cylinder thinking expects it to tail off a bit, and you’re soon hitting three figures with ease. Okay, that naked chassis makes extended high speeds a chore, but it’s nice to know that you have that extra power in hand for overtakes and the like. 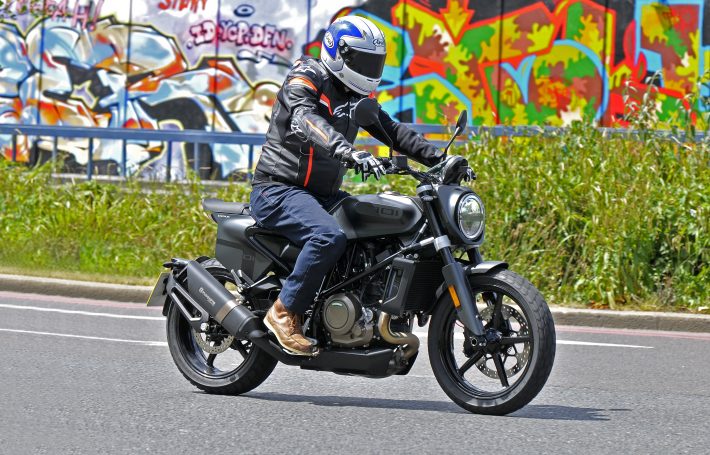 The chassis is up to the task in hand too. The front brake is a proper half-superbike spec setup, with a radial Brembo caliper and a 320mm Galfer disc, and stops you in a proper hurry. The WP suspension is excellent for road use, with a plush high quality feel to the damping. The fork in particular impresses, with loads of feedback from the front tyre. The Pirelli MT60 RS rubber is on the face of it a slight compromise for hard road use, but I liked them a lot on this test (they work well on the Ducati Scrambler too). The 18-inch front wheel will restrict your tyre choice a little when it comes to replacement time, but I’d be happy enough sticking with the Pirellis for the road.

Much of the chassis satisfaction comes from the Svart’s small dimensions though. It really is extremely slim, and is virtually 125-esque in its stature. So you can thread the traffic jam needle with supreme ease, and throw it about like a toy – yet it has proper suspension, and a bit more mass, giving the stability and handling of a big bike. Husqvarna and KTM have earned their handling and performance stripes in the white heat of off-road competition, and that really shows, even here, on a bike that majors on design and style. It would have been easy to make a ‘hipster’ styled retro-roadster and forget about the dynamics, putting in a lower-tuned engine with more basic running gear. But Husqvarna has resisted that temptation, making a bike which really does go as well (or even slightly better) than the Duke 690 which it’s based on. 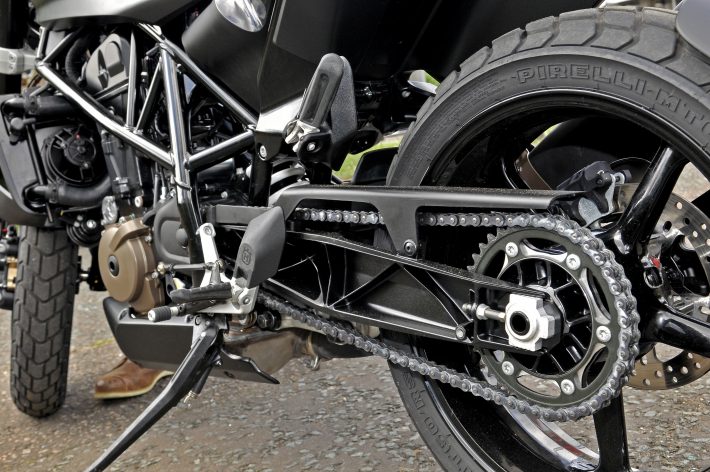 Up close and personal with the Svartpilen 701

Pros and cons of the Svartpilen 701

So what’s the catch? Or should we all go straight out a buy one of these? Well, there are a few minor niggles – the clocks and switchgear are sub-optimal as mentioned, and the fuel tank is on the small side at just 12.5 litres. But the obvious big quibble is the price – it’s nearly £9k, which is a bit pricier than the already-steep £8,300 Duke 690 (street price seems to be a fair bit lower on that bike though, we’ve seen them advertised for £6k). It’s even a little more expensive than the excellent 790 Duke, which has a cracking parallel twin motor.

The other potential problem is that styling – though it’s a bit of a Marmite affair I reckon, and you’ll either love it or hate it. Hate it? Buy a Duke. Love it? Get thee to a Husqvarna dealer, toot suite…

Everything you need to know about 2019 Husqvarna Svartpilen 701

The most powerful single cylinder engine in production, pipping the 73bhp Duke 690 motor by a couple of horses, thanks to detail mods on intake and exhaust. The SOHC head puts a secondary balance shaft where you’d expect another cam, which lets engineers fine-tune the anti-vibration setup for optimal smoothness.

Slick WP kit, with full adjustability front and rear. The forks have separate damping function – one leg is compression and one is rebound – and the adjusters have easy-access knobs on top for quick fettling.

Full-on 320mm brake disc up front is made by Spanish firm Galfer, seized by a Brembo four-piston radial caliper and Galfer pads. The master cylinder is a conventional axial type, as is the hydraulic clutch.

The fuel injection is a ride-by-wire setup, and you get a three-stage traction control system. Lighting is LED all round, there’s a nice up/down quickshifter as standard, and the ABS can be switched off for dirt track skids and the like…

Check out our Husqvarna Svartpilen 701 gallery… 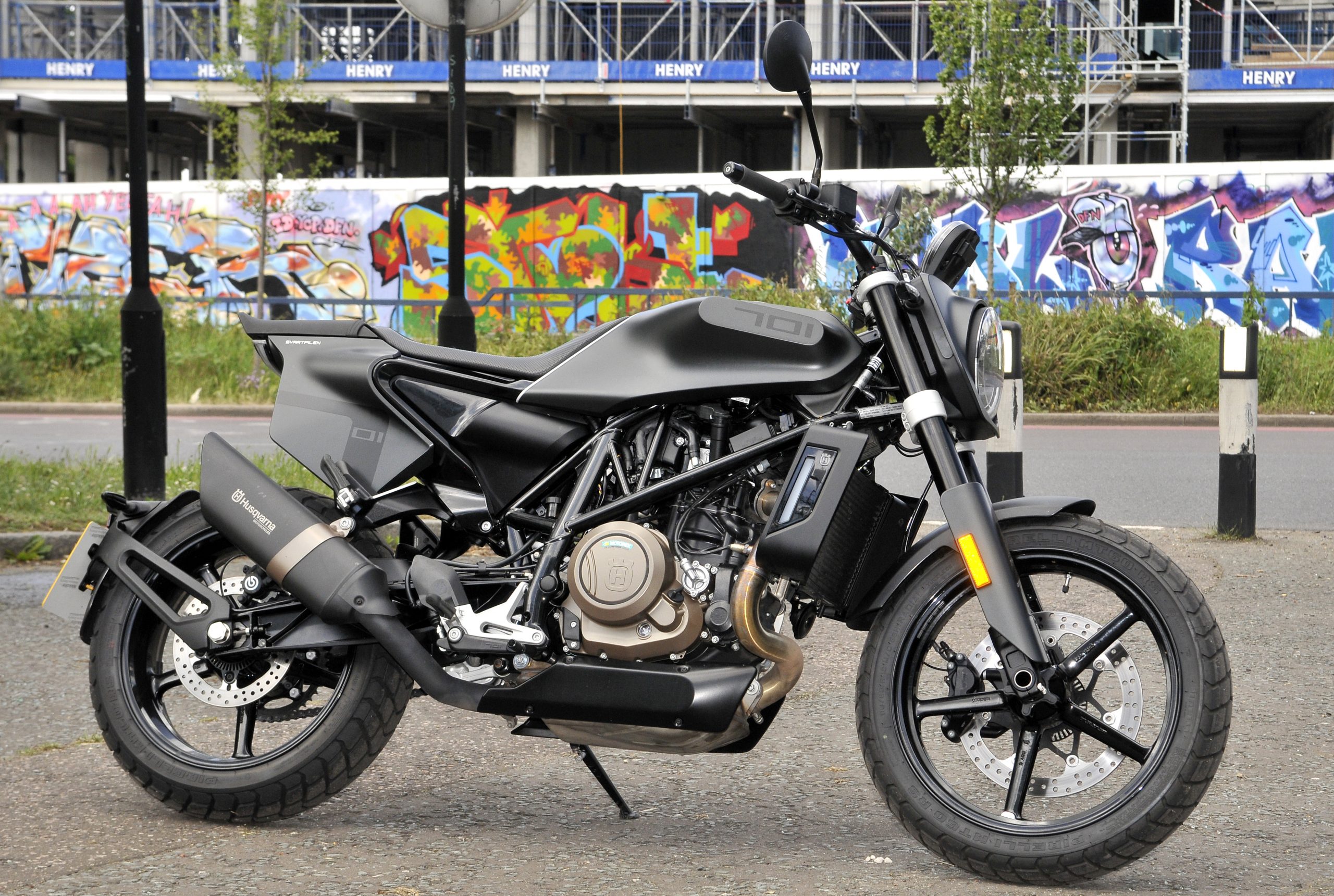 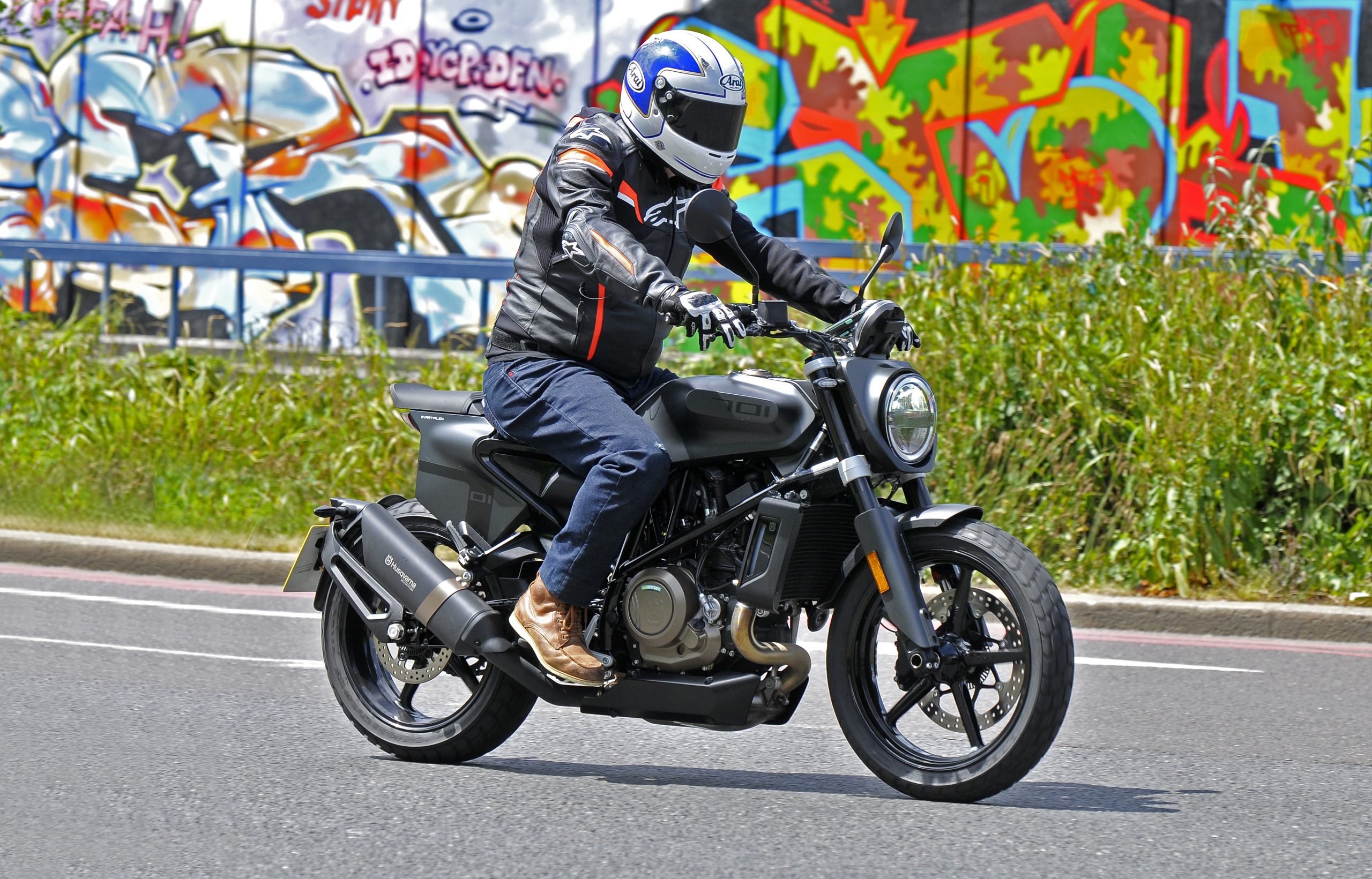 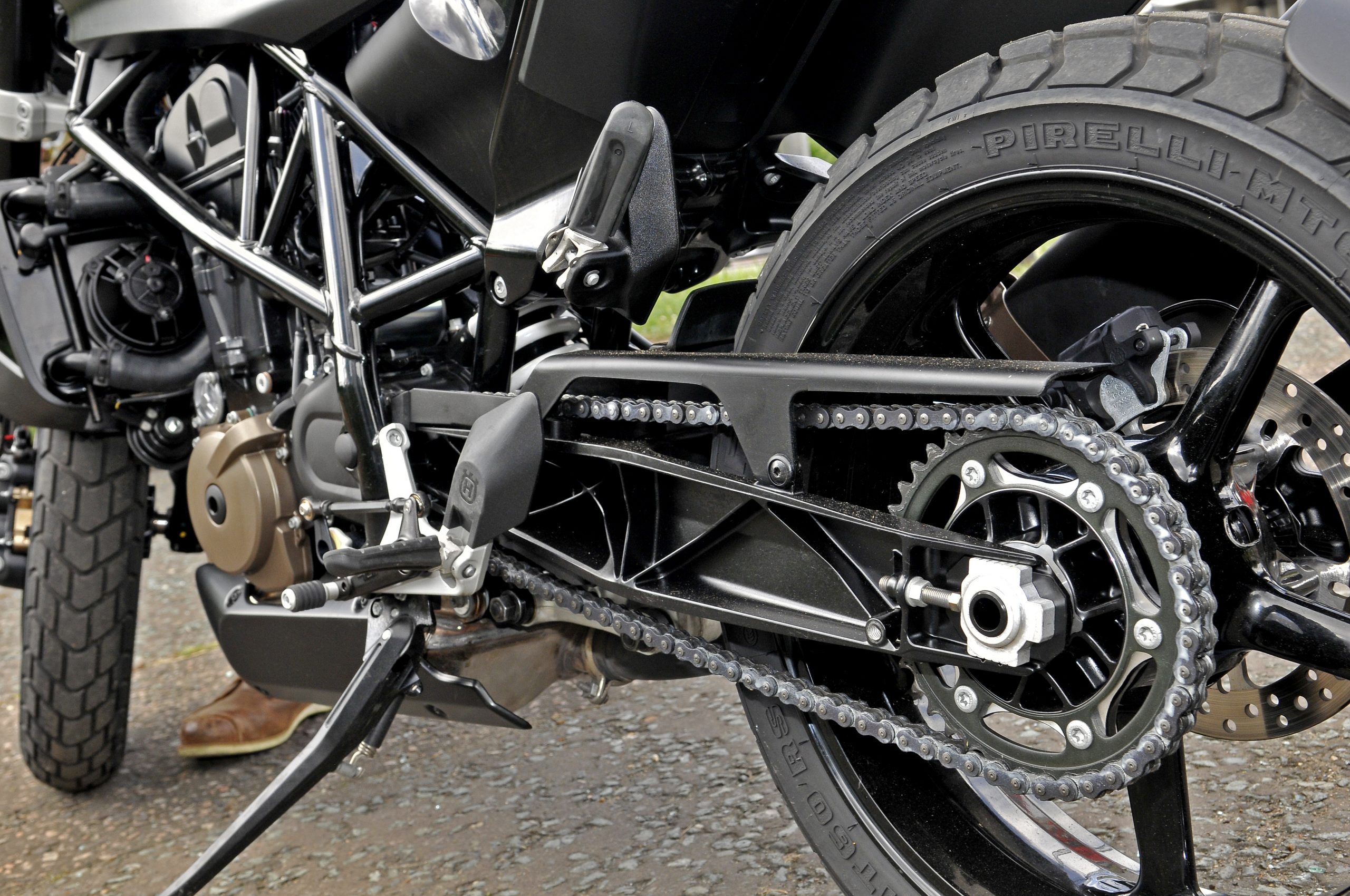 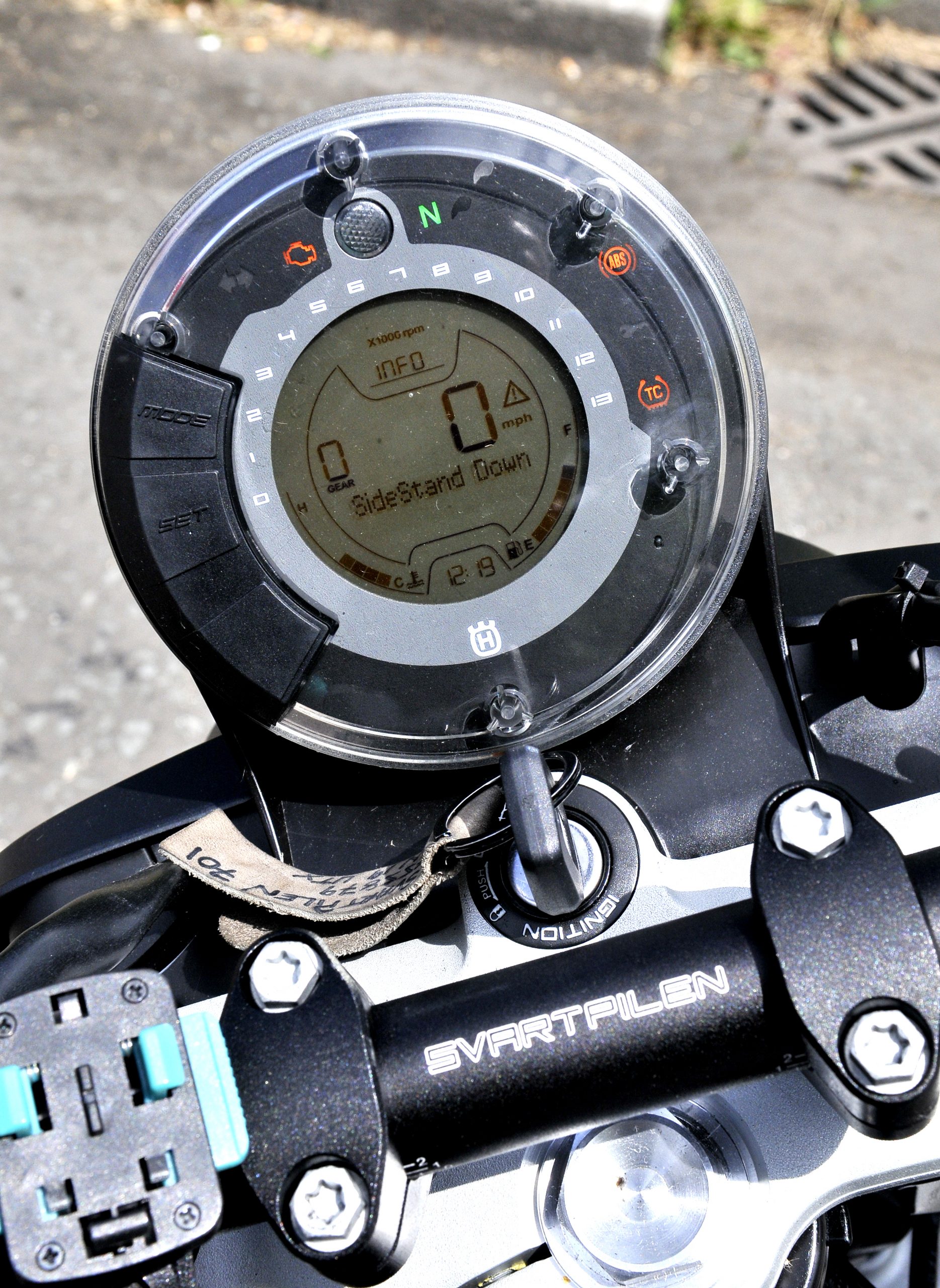 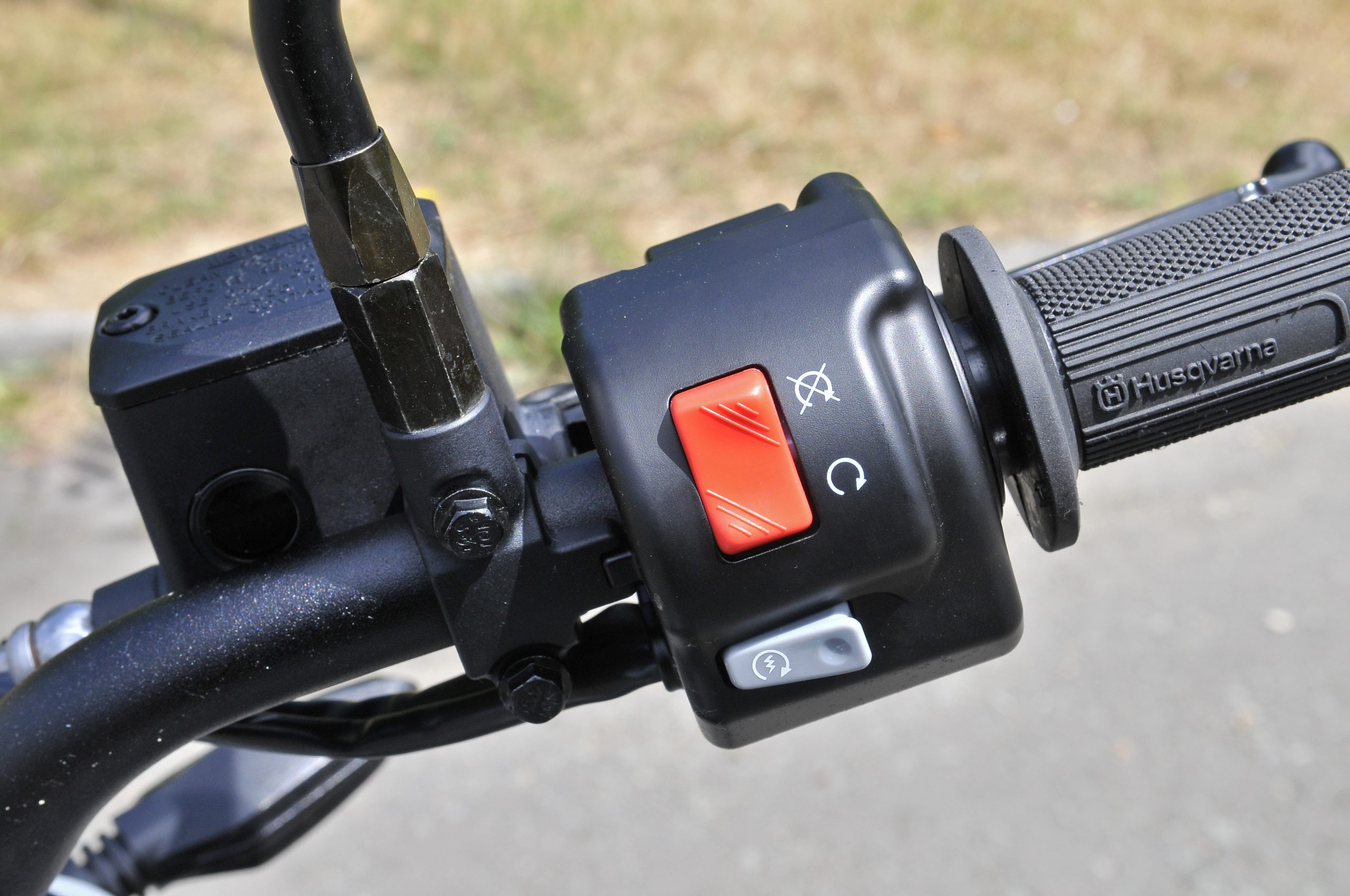 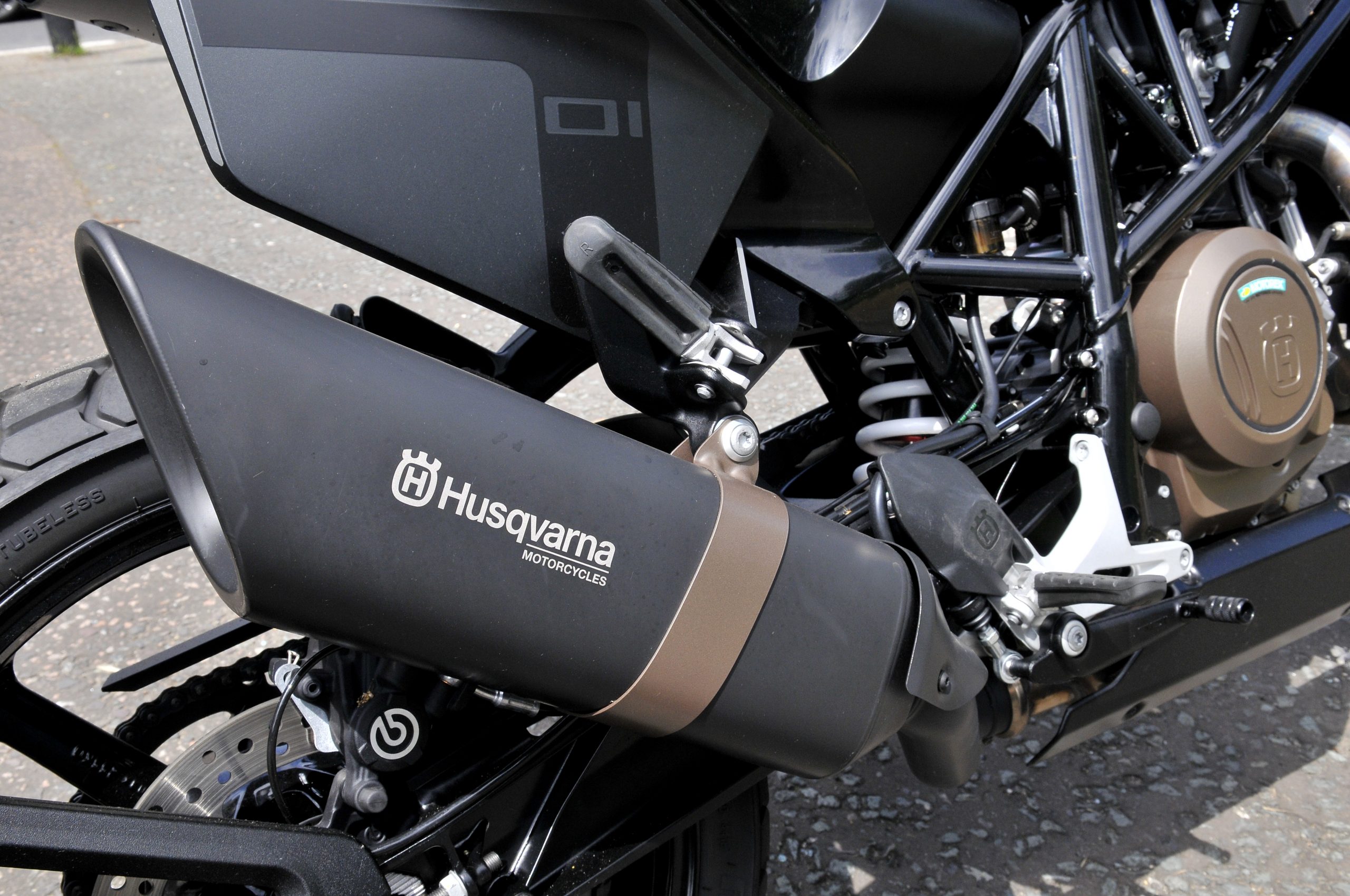 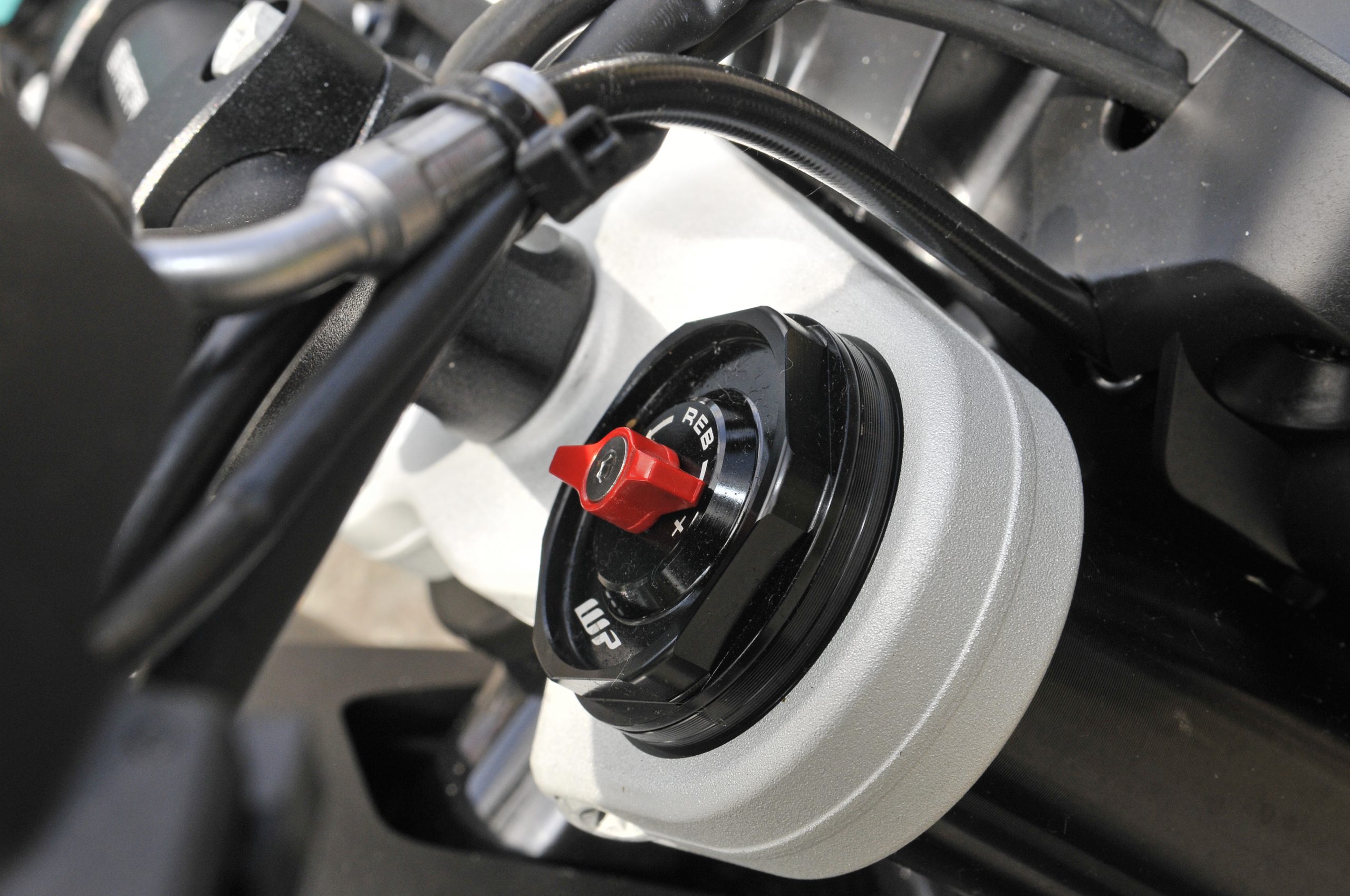