An Introduction to Motorcycle Racing

We’re delving into how to get your son or daughter on two wheels, building their riding experience and next steps to being the future MotoGP star. So where does it all start?

There are several routes to Road Racing, traditionally kids started on Motocross bikes then move over to road racing when they reached 13 years old.  With the introduction of Minimoto’s and Minimoto Racing Championships throughout Europe in the 1990’s things began to change.  Top MotoGP riders like Rossi, Scott Redding, Vinales and Marquez all cut their teeth on minimotos; now it’s seen as the best way to becoming a MotoGP rider.

Do you have a young rider?

The 1st thing is do you have a son or daughter who is already into bikes?  Do they watch racing? Love your road bike? Enjoy days out to bike events?  If any of these apply to your youngster then they might be interested in learning how to ride!

If you have a youngster who is aged between 5 and 14 years old and is into bikes the best place to start is the ‘Scott Redding Young Riders Academy’.

Is 5 years-old too young to ride?

In the UK, 5 years old is the youngest you can ride with an organisation such as the Scott Redding Academy.  The age limit exists to satisfy insurance requirements, but actually it’s the best age for most kids to start riding. This is because most kids have grown enough in size and strength to physically handle a motorbike, but also have the ability to understand and digest any instruction to help them ride bikes safely.   At this age most kids are riding a pushbike on 2-wheels which means they also have the balance they need to ride a minimoto.

Despite most kids starting at age 5 years old, you can start riding younger if your child is ready.  Even though you won’t be able to ride with an organisation you can invest in a PW50 motocross bike or ‘Baby Blata’ Minimoto and ride on private land or if your driveway is big enough!  This will give your child a head start by learning balance, throttle control and braking prior to riding at an academy.

Also starting your young rider at this age has other benefits as riding becomes one of their core skills, it also helps them with riding confidence and normally progresses them quicker when they start racing.

Max Cook, a young British Superbike rider who is sponsored by Devitt, started his racing career at the age of 8 years old.  He started riding at the Scott Redding Young Riders Academy when he was 7 years old and really enjoyed himself.  In his 1st year Max went on to win the Novice Championship. 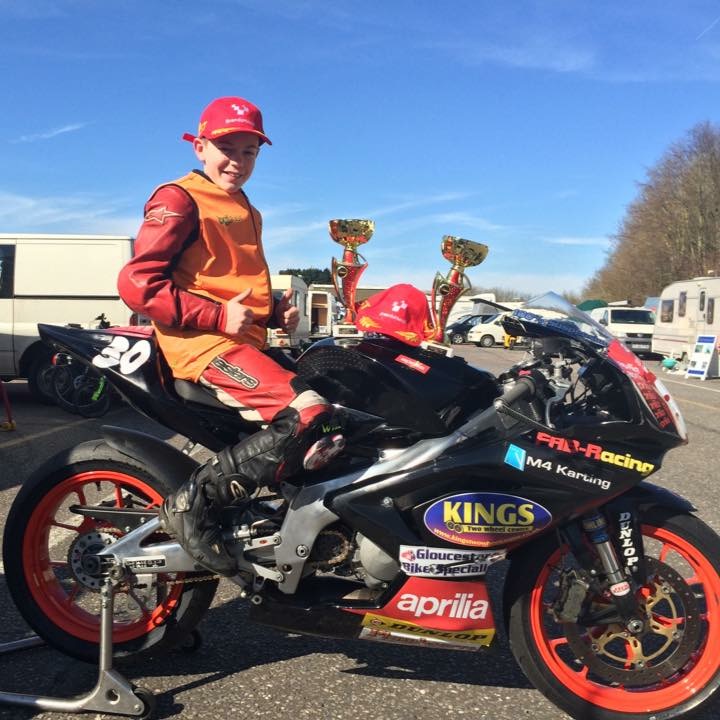 Do you have an aspiring young rider?

The Academy was launched in 2012 by Scott Redding and a group of racing dads to help get more kids into bikes and racing.  The academy replicates the Spanish way of teaching kids by giving them safe and fun environment to learn to ride a Minimoto.

It starts with 1 to 1 tuition from an instructor to ensure new rider has control of the Minimoto and then they are placed into a riding group based on ability.  This means kids are on track with riders of a similar ability which helps grow confidence and enjoyment.

Halfway through the morning session, the academy breaks up for some fun, skill based games to improve slow speed bike control and confidence.  The academy then provides ongoing coaching for the kids and also provides advice to parents about what bike and gear to buy, technical tuition on bike and tips on how to take the next step riding on outdoor circuits and then onto racing.

Whilst the academy is the best place to start riding, it is unique as it’s the only place in the UK that trains and coaches kids. There are other circuits in the UK where you can hire minimotos or use your own:

From a Hobby to Racing

Everything You Need To Know About Motocross UK