Just passed your test and burned your L-plates? Congratulations – but there’s still a lot to learn. Every day is a school day, so here are our top 10 tips and skills that newly qualified riders should really get to grips with.

In order to be in proper control, make sure your bike fits you as best it can. There isn’t a huge scope for adjustment, but at least get the brake and clutch lever span and positions so they’re right for you. If the levers are too high it makes for an awkward stretch up; pivoting the lever mount down around the handlebars by just a few millimetres can make an enormous difference.

It’s also worth experimenting with suspension settings, if only to get a feel for what changes the adjustments make. If you have a click-position rear preload adjuster, try backing the preload off by a click if you’re on the short/light side or adding a click if you’re, er, the opposite. Ditto with the front forks.

By doing so you’ll respectively lower or raise the bike’s ride height, which will make it easier or harder to touch the ground. It will also have an effect on steering response and ground clearance. Remember, only adjust one click at a time and make a note of where things are before you start so you can put everything back where it was if needs be.

Low-speed control is an important skill to master – all that cone-avoidance they taught you in your CBT was for a reason.

Don’t tell your chiropractor but the secret to low-speed control is bad posture. You don’t want to be stiff-backed and upright, thighs and groin hugging the tank; instead, imagine you’re a dead weight slouched in the seat, shoulders, arms and legs relaxed and with your hips loose.

For full-lock walking-pace U-turns, turn your head and twist your torso slightly in the direction you want to go, then let the bike and the bottom half of your body come back into line with the top half as the bike straightens out beneath you after the turn. Try balancing throttle and clutch control against a bit of back brake – you can almost use the foot pedal as a second clutch – to bring the bike to a stop without putting your feet down at all.

The emergency stop practised for your test isn’t just for fun. In the real world, all sorts of things can happen that will require you to make a sudden stop, so it’s a good idea to keep practicing after your test – and especially when you get a new bike.

If your bike has modern ABS then it will do most of the work for you, but you can still practice good braking technique. Squeeze, don’t grab, the front brake, and likewise the rear – press down progressively rather than stamping on it. That way you’ll generate most stopping power before the ABS kicks in, if at all.

If you don’t have ABS then much of the above still applies. It’s not a bad idea to try locking the rear on purpose a few times – and immediately taking your foot off the pedal – just to get a feel for it when it happens in a real sudden-stop situation.

Your body position can help. Try squeezing the tank with your knees to avoid yourself sliding too far forward, which can put undue stress on your arms and reduce the control you have over the front brake. 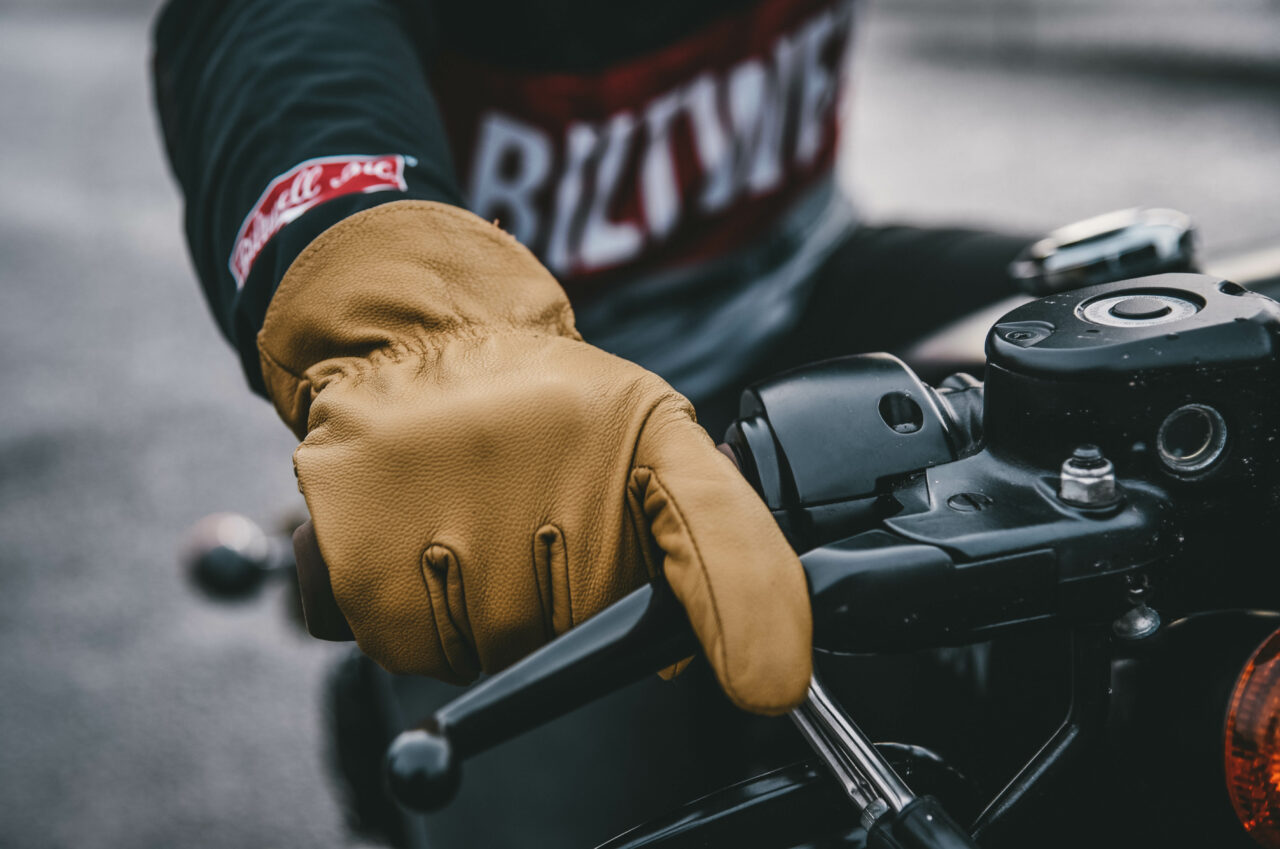 Some instructors will cover countersteering in some depth while training you for your test, others won’t, perhaps for fear of confusing the issue of getting a bike to go round a corner. But the fact is this: once you’re moving faster than walking pace, to get your bike to turn right you start by turning the bars to the left (and vice versa), whether you realise it or not.

When people talk about ‘trying countersteering’, what they mean is doing it consciously and with a more positive input in order to initiate a turn. Done properly, it can help you turn more quickly and more accurately, and it’s worth giving it a go. To turn right, apply a smooth, positive forward pressure to the right-hand handlebar with the heel of your hand, and you’ll feel the bike start to lean over to the right; the same forward pressure with your other hand on the left handlebar will initiate a turn to the left.

On a very quiet road or in a large empty car park, try riding in a straight line and gently weaving the bike from left to right by applying alternate countersteering inputs. Once you’ve got a feel for it, conscious countersteering can transform your riding on the open road.

You go where you look, even if you don’t want to be there. You can think of target fixation as either positive or negative. Say you want to ride right over a particularly grippy-looking bit of tarmac on a wet road or hit a perfect apex on the track: if you look directly at it, you’re likely to be on target. Remember, though, that if you’re moving forwards, your line of vision needs to be moving forwards too.

Negative target fixation is something most bikers have been guilty of at some point. It’s when you see something you don’t want to ride over or hit – say, a wet manhole cover or the outside kerb of a corner when you think you’re running wide – and you panic, fixate on, it and end up running over or into precisely what you wanted to avoid.

It’s a basic animal response to keep looking at things we’re scared of, so overcoming target fixation takes a bit of mental effort. It’s certainly possible, though. Mostly it’s important to relax and stay calm, but you can also practice both positive and negative target fixation.

On a quiet road or in an empty car park pick an object – say, a particular letter in a road marking, a small drain cover – and practice riding directly over it, then try missing it by an inch or two. You’ll find that with the tiniest adjustment to your line of sight you can make very accurate changes to your trajectory.

A motorcycle is presented with many more opportunities to overtake than a car. Brilliant – but be careful.

There are two key things to be aware of: the car you’re passing turning right as you go past, and a car turning left out of a side road on your right and risking a head-on collision with you. What can we learn from this? Don’t overtake when there’s a turning to your right up ahead, unless you can be 100% sure neither of the above scenarios is going to happen.

Turnings to your left pose a hazard, too. That slow car you’re following might not impede a car turning right out of a side road and across its path, but if you’re going for an overtake at the same time, you could be on a collision course.

Plan your overtakes well ahead and don’t be afraid to back off if you change your mind. And don’t follow the car in front too closely – it’s annoying and possibly intimidating, and could result in them doing something stupid as you try to pass. Also be aware of other bikes/cars coming past you as you’re about to overtake – especially if you’ve been hesitant about passing a slower car.

New riders tend to fall into one of two camps when it comes to riding in traffic: over-cautious or over-confident. We’re looking for a happy medium between the two.

You need to be hyper-alert in order to filter safely. You might be travelling more slowly than on the open road but there’s much more going on and more potential for things to go wrong. Technically, filtering is overtaking, so be aware of the cars you’re filtering past turning right as you pass them, and look out for cars, cyclists or pedestrians appearing from the gaps between the vehicles you’re passing.

Confidence will come with practice, especially if you commute the same busy route each day. You’ll soon learn how the traffic flows and spot the best ways to take advantage it, then you can apply those lessons learned elsewhere.

There’s little you can do to practice in advance, so the most important thing is your mental approach: know your limits and don’t be suckered into riding faster than you’re comfortable with. Make sure you know where you’re heading, so if things get too much you can drop back and ride at your own pace – and don’t be afraid of losing face by doing just that.

In the group, don’t fixate on the back of the bike in front; instead, look through and past them as far ahead as you can. While a bike in front is narrow, it’s also quite tall, so adjust your road position for the best forward view. And remember that groups of bikers can be intimidating and/or annoying to other road users, so be careful, cautious and courteous around them. 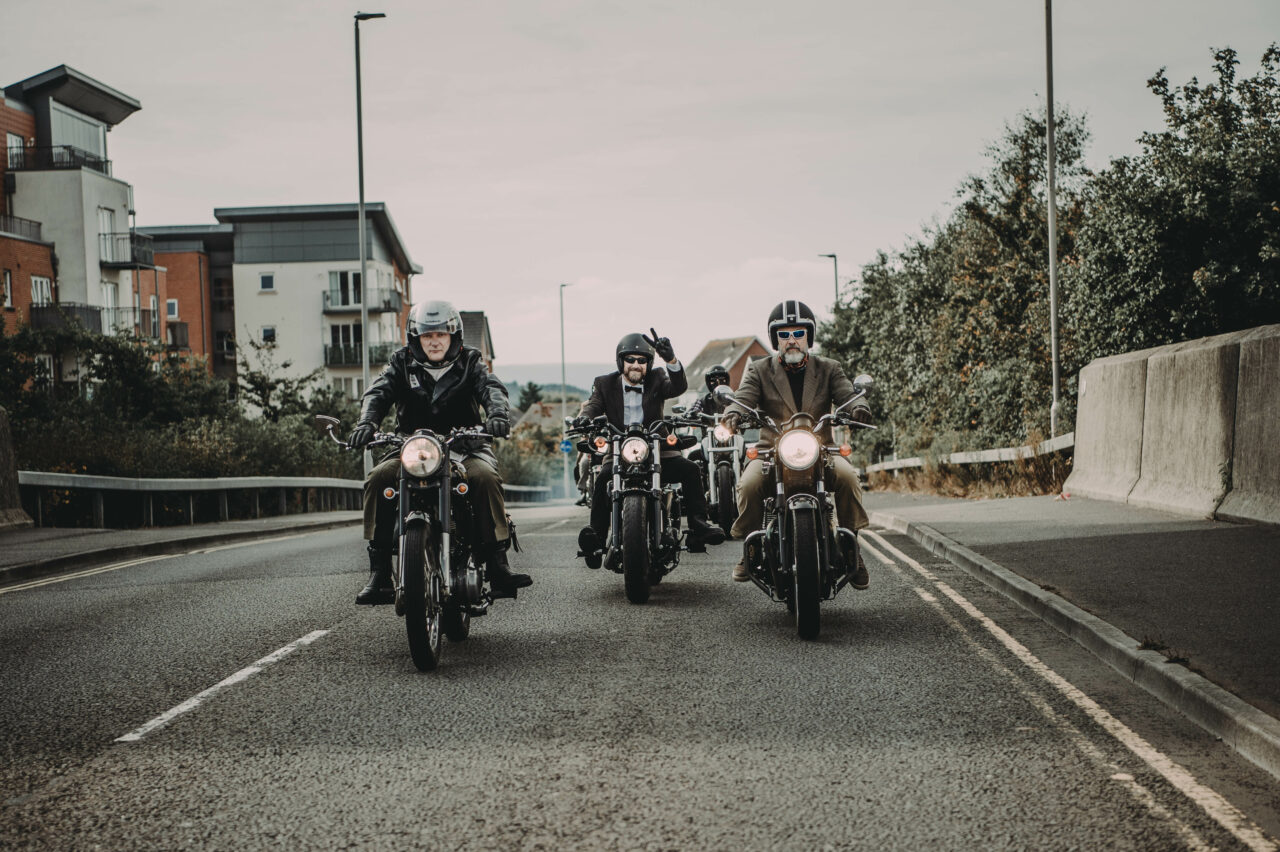 Don’t fear riding in the wet. Yes, the road can feel like an ice rink, yes, your visibility can go to pot and yes, you might end up with damp underpants, but there’s nothing like a good ride in the wet to hone your skills.

Relax. Be smooth. Don’t tense up. Avoid extra-slippery hazards (see Target Fixation). If you’re stiff and nervous, that will be reflected in how the bike responds to your inputs, which will only knock your confidence further. Ironically, by riding too tentatively, your bike will feel less secure than it will if you’re smoother and more confident. Throttle control is everything – open it progressively so the throttle position always matches engine revs; never grab a handful and wait for the engine to catch up.

It’s the same with the brakes: squeeze, don’t grab. Get some weight on the front tyre then progressively add more lever pressure. And try to get a feel for what the tyres are doing, both on the brakes and when accelerating, via the handlebars and, quite literally, the seat of your pants.

The term ‘advanced rider’ is a turn-off to some motorcyclists while to others it’s a badge of honour, but we can’t recommend post-test training highly enough. There are all sorts of organisations and companies offering further training, some independent and some affiliated to manufacturers, but they all have the same goal: to make you a better, safer and more confident rider. What you then do with your new-found skills is up to you…

Don’t discount circuit-based training, race schools or off-road schools either. Any time spent on a bike, in whatever conditions, will only add to your skill set and be reflected in your riding.

"The young man I spoke with was helpful, polite, and..."