An Italian brand of motorcycles manufactured by Ducati Motor Holding S.p.A., Ducati is headquartered in Bologna of Italy.  Innovation, Italian style and sports victories are the key selling points emphasised in its marketing message. 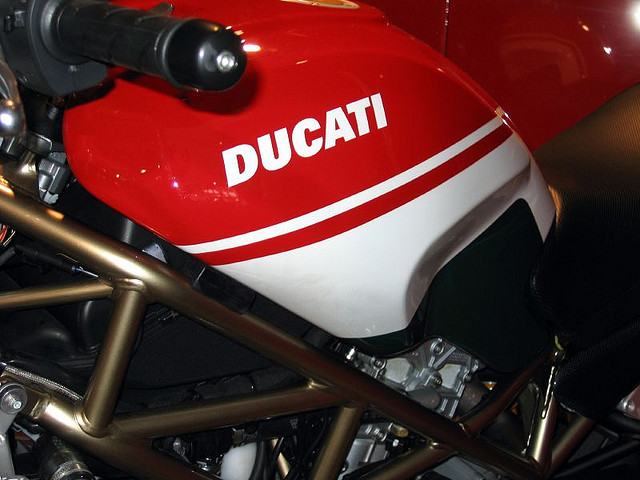 Founded by Antonio Cavalieri Ducati, his three sons (Adriano, Marcello, and Bruno) as well as other investors in 1926, the company began its life as a supplier of radio transmission equipment.  After experiencing much success, it expanded into the sale of motorized-bicycle units with a small pushrod engine made by a Turinese firm had called SIATA (Societa Italiana per Applicazioni Tecniche Auto-Aviatorie).

The first motorcycle to include an engine made by the Ducati firm in collaboration with SIATA came out in 1950, and was a 48cc bike weighing 44kg with a top speed capability of 40mph.  Ducati never looked back, increasing its motorcycle production to 120 bikes a day by 1954.  By then, the company had been separated into two separate firms – Meccanica SpA and Ducati Elettronica, in recognition of the dissimilarity between its electronic and motorcycle products.

Ducati became a household name in motorcycling history in the 1960s, as it produced the fastest 250 cc road bike that was available then.  The firm’s ownership changed hands several times from the 1980s – it was bought by Cagiva in 1985, Texas Pacific Group in 1998, Investindustrial Holdings in 2005, and since April 2012 it became part of the Volkswagen Group.

Today, Ducati is owned by German manufacturer Audi through its subsidiary Lamborghini, with Volkswagen being the ultimate parent company.

Ducati Multistrada 1200, 2014: Features a powerful 1,198cc liquid-cooled, 8v V-twin engine with 6 gears as well as a tubular steel trellis frame.  Instead of electronically adjustable Ohlins that come with S-models, it has a set of 50mm fully adjustable Marzocchi forks and Sachs rear shock. 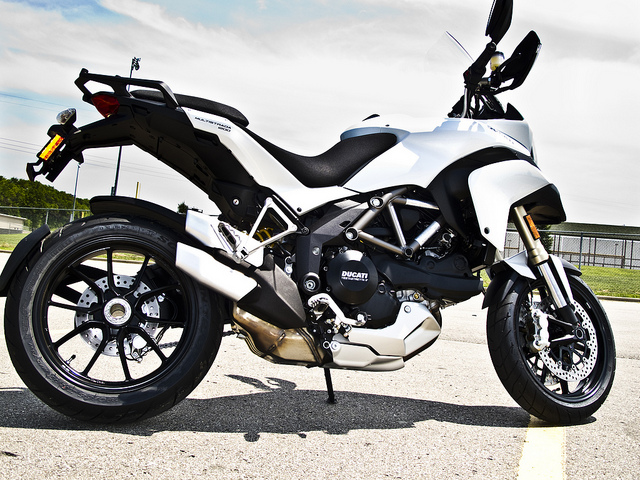 Ducati sponsors a number of sporting events in local communities around the world, including the Australian Ironman, Michigan Hockey Advancement and much more.

Ducati motorcycles are much loved around the world, as evidenced by their positive reviews and industrial awards received.

In 2014, Ducati took out 5 awards at the annual ‘Motorrad des Jahre’ (Motorcycle of the Year) event held in Stuttgart, Germany.  The Ducati Multistrada was awarded ‘Motorcycle of the Year’ in the All-Rounder category, while its Diavel took out the top prize in the ‘Cruiser’ category.  In the ‘Sportbike’ category, the Ducati 1199 and 899 Panigale came 2nd and 3rd respectively.  The Hypermotard took 3rd place in the ‘Enduro/Supermoto’ category.

In 2013, the 1199 Panigale won “best-of-the-best” award in the Red Dot Design Competition which saw 4,662 entries.  Judged by a panel of 37 experts, the competition is one of the biggest and most prestigious internationally.

Other award winning bikes include the Ducati 1098 and Ducati Streetfighter.

"Good price although price seems to change a lot having..."