If any bike matched the legendary reliability of Ducati, it was the Japanese, Yamaha TRX-850. Despite that being the objective of Yamaha, things did not go to plan with the bike receiving a lukewarm response from biking enthusiasts.

The good news is there are quite a few of the iconic TRX-850s still around and they still offer good value for money in the used market. If you want a bike that oozes character – the Yamaha TRX-850 is the bike for you.

It uses a similar parallel twin engine as the TDM850 and while it offers less power than other 600ccs of its time, it nevertheless offers a very satisfying biking experience.

This comes from its twin cylinder, which houses a 270 degree crank that makes the bike feel and ride like a V-twin engine.

While the new bike was rather springy initially, a used bike could do with a replacement of springs and fork oil to work as good as new. That said, the bike is agile and responds like a true sports machine without being intimidating in any manner.

While the calliper braking system worked just fine it could be replaced with something more modern.

There was a problem with Yamaha bikes during the 1990s because of corrosion – with the TRX-850 being one of those bikes. Care needs to be taken with brackets and fasteners that are susceptible to rusting. 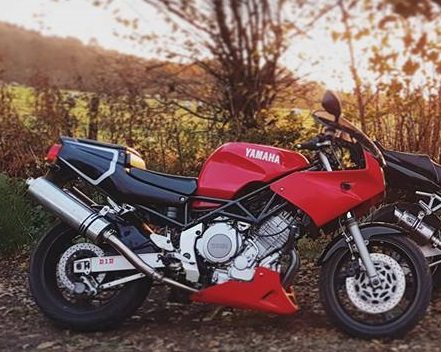 Absolutely excellent bike starting to become more of a collectable looks and rides superb for the age. Definitely a keeper. The engine is superb and makes an amazing sound with aftermarket exhausts. It is also a very nice looking bike for the age.

The look of the rear tail light is a bit big and blocky only negative point I would give the bike.

The look of the rear tail light is a bit big and blocky only negative point I would give the bike.

"Quick and easy – thanks"