Every now and again, a bike engine appears which becomes an instant classic. Yamaha’s current three-cylinder 900 lump is exactly that. Released in the MT-09 back in 2014, the 847cc motor floated our boat straight off, with a lovely strong, torquey delivery, loads of character, great sound and a decent 115bhp peak output.

Since then, Yamaha’s used it in all manner of machines: the standard MT modern naked roadster, the Tracer adventure-tourer, even the Niken three-wheeler. And with the XSR, there’s a slick retro-design roadster option too.

That engine is a treat in all variants – though the Niken is a little underpowered. And Yamaha did okay with the chassis too, considering the prices of the MT-09 and the XSR. The suspension is a little soft and bouncy, brakes are good, stock tyres work well enough, but the overall package is great fun – and effective too.

The XSR taps into the current custom/retro zeitgeist really well, though it’s mostly a styling exercise. Under the time-travel clothing, there’s the same basic engine and chassis package, though the XSR seat is slightly higher.

So it’s a question of looks between the two really – if you like the brown seat, sculpted tank, round headlight, machined alloy parts (and don’t mind the slightly higher price), then go for it. 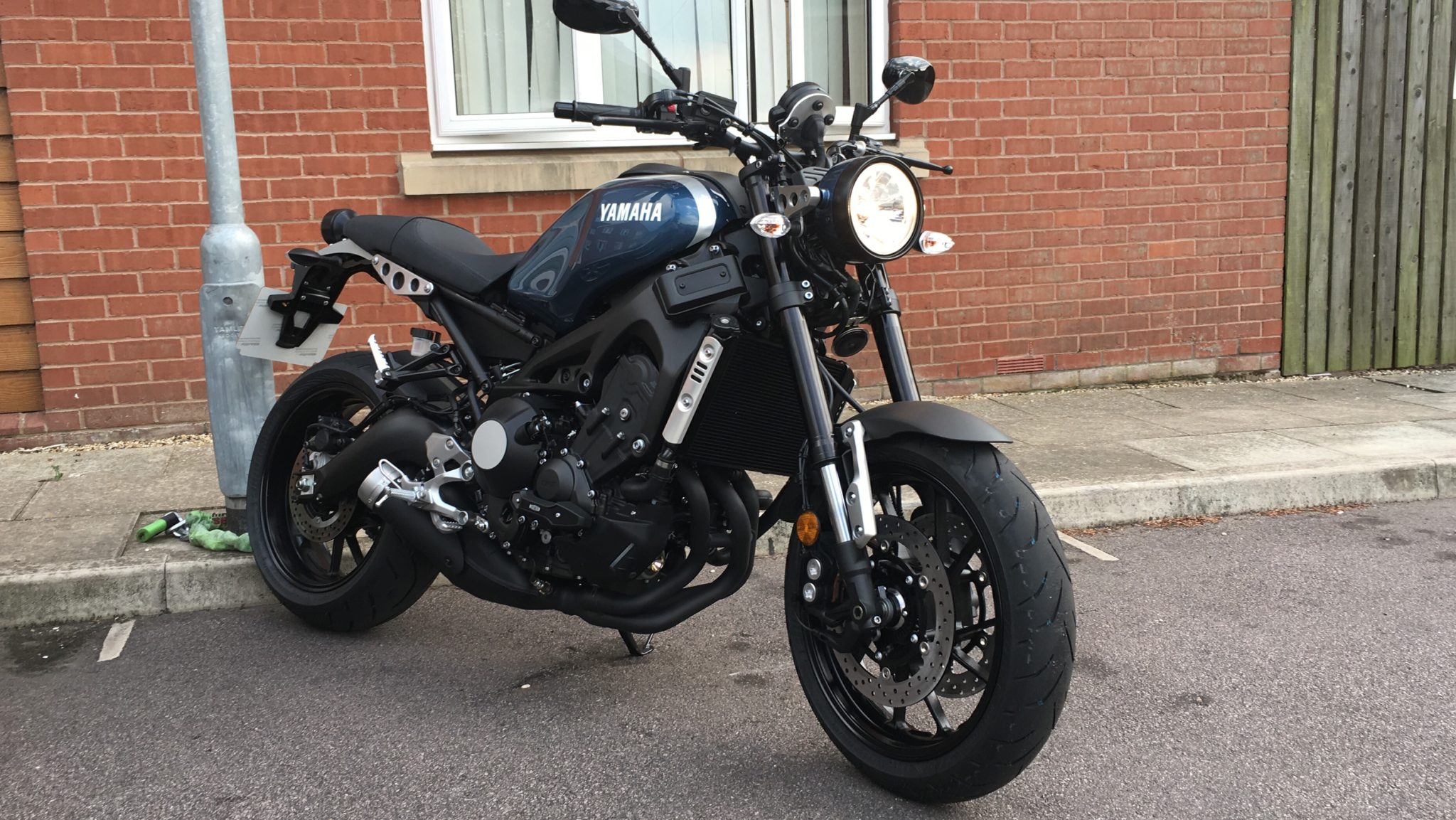 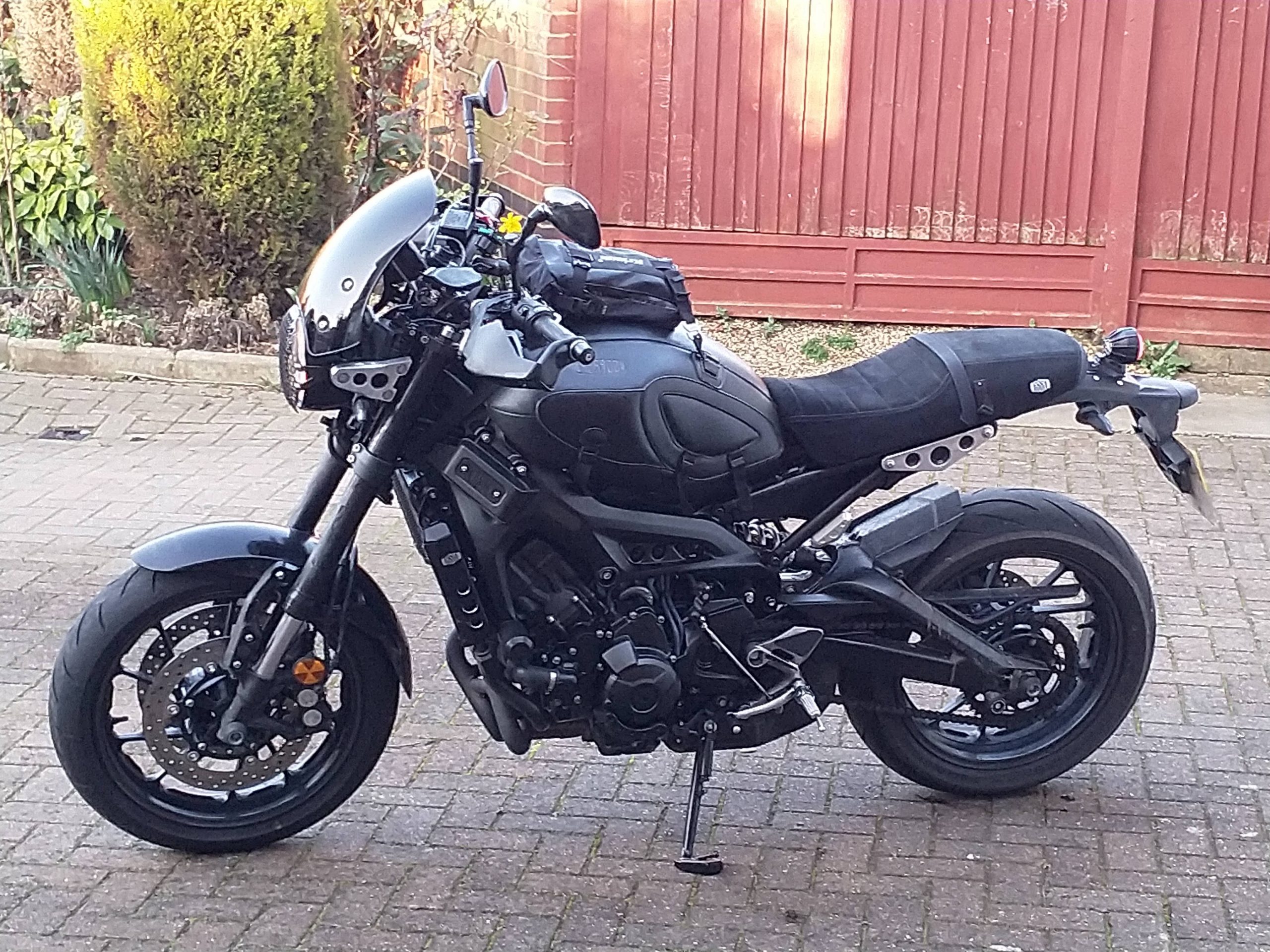 Feels unstable at around 70mph when breezy. May be down to screen

Have completed 300 mile day trips without much discomfort. Unable to comment about pillion yet as have not ridden 2 up

Reliable so far. No breakdowns or issues

Smooth ride. A little feedback through bars when slowing down at 23 mph.

Andrew Wright 4 out of 5 stars

The MT09 was a bike with a great engine but lacked quality suspension, assist and slipper clutch and traction control. The low weight, uniquely brilliant triple engine and all-day comfort have been combined with lacking elements, heritage, pedigree and gloriously sexy looks to deliver what the retro market has been missing…something with enough power to flirt on the dangerous side of fun.

The uprated assembly present here emphasises the poor set up given to this bike's donor; the MT09. Adjustable front and back for rebound and preload it does everything it needs to for road use.

With typically upper middleweight naked bike 115-ish bhp, it appears under powered compared to the latest generation of power bikes. For a bike designed for road use, it has more than enough power for road use.

Typically Yamaha, they're not so well established by chance. The switchgear and user input controls aren't BMW standard but don't feel flimsy or delicate. Mechanical components are second to none.

Twin discs at the front and single rear provide plenty of stopping power, more than enough for day to day use and enough to give you confidence ahead of those emergency moments. The initial bite is disappointing and leaves a lot of room for improvement.

It looks the absolute nuts. The handling and speed is just right to give you bundles of fun during the commute or a weekend ride out.

Nothing. Honestly it's the best bike ever.

It's the best bike ever. Handles amazingly well on twisties or in commuter traffic.

It's the best bike ever. Power throughout the range

It's the best bike ever. Feels quality and everything I've taken apart goes back together.

It's the best bike ever. It stops on a 6 pence.

Bradley 5 out of 5 stars

Fuel tank capacity is a bit on the low side.

Corners easily and has the power if you need it

Still pretty new but haven’t had any issues with it

The acceleration and handling.

Suspension, that Ohlins upgrade is listed for a reason.

Fantastic engine, it growls as triple should. More than enough power for fast road riding, any more power and I think it'd be wasted

Can't fault this so far, but it's only been 2 years.

It's not brembo, but the brakes have a good bite to them. I'd say it's good for the bike, but I'd have liked to see something a bit better on it.

Calum Moss 5 out of 5 stars

Honestly just how fun it is to ride, its a brute in a suit!

The standard exhaust in look and sound! But a decent aftermarket sorts that I suppose.

As soon as i throw my leg over i start smiling, im 6 foot and can place both feet flat which is nice. Pick up out of the corners is superb and theres so much torque available! The ride modes help but ill be honest its A (hooligan mode) for the biggest grins. My only gripe and its a small one, the back end can feel a bit “bouncy” under hard cornering but I'm not out cornering like rossi so rarely notice!

On paper its 115bhp...it feels it! In A mode TC1 give it a fist full the front wheel just wants to lift theres so much torque! It quickly sorts its self though but isn't overly intrusive. Keeps up with proper sports bikes as well without braking a sweat...it does lose a bit at the top end but at the end of the day its a retro/naked not an R1.

Honest fuel range, riding sensibly commuting in standard mode with no rush hour morning drag races it'll do 13/140 before the light comes on then another 20 or so from there. Ride for fun...your looking for a petrol station by 100 miles with maybe 20 up your sleeve. Tyres, fairly standard size mine came with Battlax S21s and they were superb, only lasted 2000 miles but i use the bike daily to commute aswell as fun so I’ve stuck a set of Battlax BT023s on and the feel just as good! Service costs hard to judge as i do my own.

Never had any issues. Starts first time, even after a 2 week lay up while i was on holiday started like it had just been parked up. My only problem which I believe others have had as well is the stock headers rust like mad!

Needs brembos! The stock ones are good...loads of feel but i cant help think they've dodged the brembos trying to save a couple of quid.