When it comes to motorbike racing and motor sport as a whole, whether in the UK or around the world, few riders are more famous than the late Barry Sheene. With success on the track, and a playboy lifestyle off it, the Cockney ace was adored by the public and, never afraid to speak his mind, his popularity knew no bounds.

It’s now more than 15 years since he sadly passed away but his career is remembered now as much as what it was when he was racing and as well as his two 500cc World Championship titles, few will ever forget the two huge crashes that he suffered. We take a look at his ten career defining moments.

The bike that arguably transformed Barry’s career, the 125cc ex-works Suzuki twin cylinder cost the princely sum of £2000, an awful lot of money in 1970 and it wiped out the Sheene funds, both father and son. But it had achieved a lot in the hands of former rider Stuart Graham and would give Barry two superb years and catapult him onto the world stage.

The 1971 125cc World Championship saw Barry battle all year long with Spanish ace Angel Nieto on the factory Derbi with Italian Gilberto Parlotti on the works Maico also in the mix on some occasions. Nieto won five races to Barry’s three but with 109 points from 11 rounds, it was Barry who scored the most points, 109 to 87. However, at the time only the rider’s best six results counted towards the World Championship and Nieto took the title by eight points.

When Barry arrived at the Isle of Man for the 1971 TT races, he was in a happy, cheerful and confident mood. Having taken third in the opening Grand Prix of the year, he’d enjoyed the TT as a young spectator and paddock helper and was looking to score some valuable points for his world title campaign. However, whilst Dad Frank was an ardent supporter of the TT, Barry’s mood soon changed and the TT became a place that he hated.

He led the 125cc TT race in the early stages until he hit thick fog over the Mountain and eased off. Also experiencing clutch problems, he crashed out at Quarter Bridge at the start of the second lap much to his own relief. In his own words “the Mountain circuit didn’t frighten me in any way. I just couldn’t see the sense in riding around in the pissing rain completely on your own against the clock.”

Despite his crash, Barry still took part in the Production race on a borrowed 250cc Crooks Suzuki that was sponsored by Devitt. He’d again posted good times in practice but after suffering a moment  during the race, the seat, petrol tank, steering damper and battery all worked their way loose and he pulled in after one lap. He never raced at the TT again. 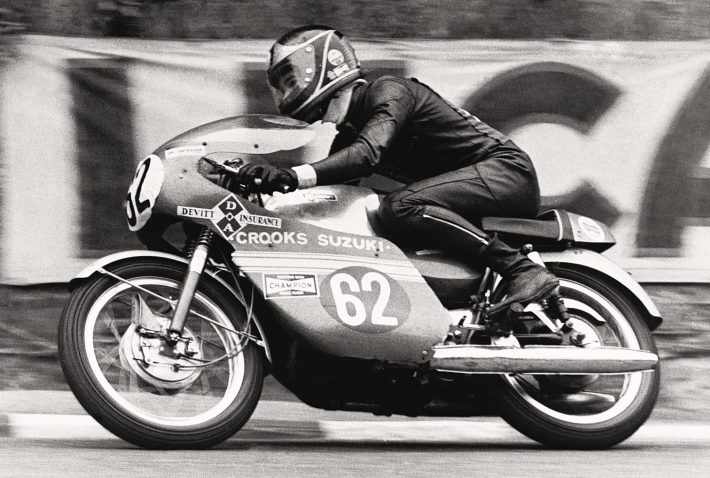 Sheene during the one and only year he raced at the Isle of Man TT 1971. Credit: Morton’s Media Archive

After a disappointing season with Yamaha in 1972, 1973 was a year that put Barry’s career firmly back on track. It was the beginning of a seven year period as a works Suzuki rider and he targeted three titles – the FIM Formula 750 Championship and Britain’s two most prestigious national championships, the MCN Superbike and ShellSport 500.

Barry was given two machines by Suzuki – an air-cooled TR500 and a three-cylinder water cooled TR750. Both bikes were developed from road bikes but they were housed in frames built by chassis specialist and former sidecar Champion Colin Seeley. The superior handling of the bikes combined with Barry’s own mechanical skills ensured the partnership was a success and the Seeley-framed TR750 triple gave Barry victory in both the FIM F750 Championship and MCN Superbike series. 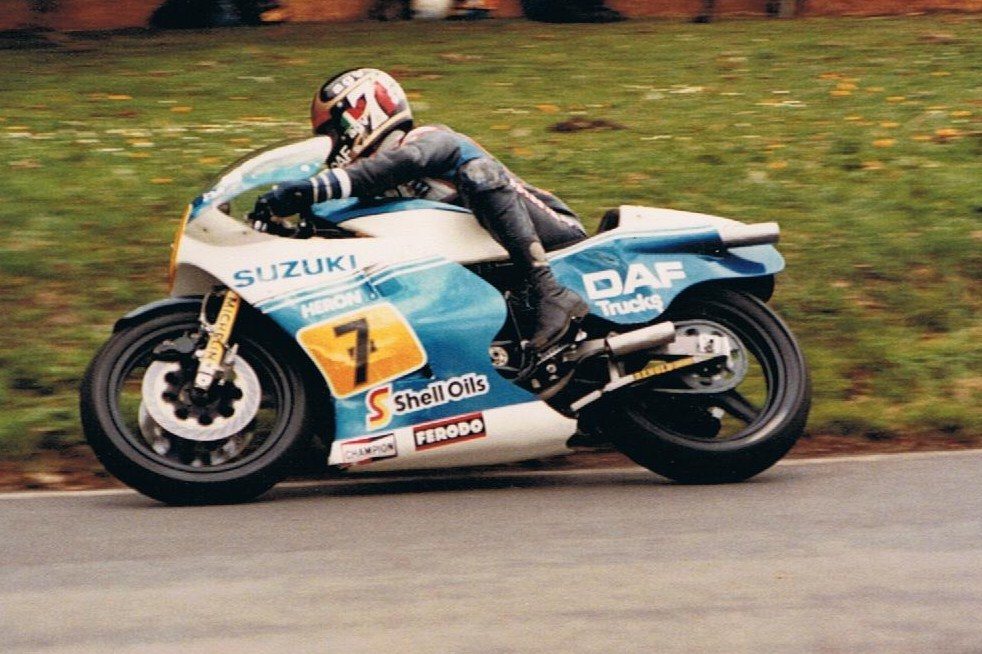 The Daytona 200 in America was the traditional curtain raiser to the International road racing season but the 1975 meeting was one that changed Barry’s life forever as he became a national hero overnight. He’d gone into the event as one of the pre-race favourites whilst his growing reputation saw him accompanied by television crew led by award-winning producer Frank Cvitanovich.

On 28 February, Barry had completed five laps of his practice session and was hitting speeds of over 170mph around the banking when rubber from the rear wheel flew off and locked the rear wheel. Within an instant, the rear wheel came round and catapulted Barry over the handlebars and flung him over 100 yards down the road. Amazingly, he was still conscious but he’d sustained a broken left femur, a right wrist, forearm, six ribs and collarbone.

It was the fastest crash ever in motorcycle racing and Barry was suddenly on the front pages of the newspapers and on television screens all around the world as millions of viewers saw the crash for themselves.

Darkness was descending on the Swedish circuit of Anderstorp when the 500cc World Championship race concluded on 25th July 1976 but it was all sweetness and light for Barry as victory saw him clinch the title in typically convincing fashion.

However, he was caught napping at the start and had to fight hard to come through the pack but once there the only man to challenge him was Tepi Lansivouri but the Finn’s hopes were dashed when the swinging arm fixing bolt came loose and he had to slacken the pace eventually finishing fourth. That left Barry clear in the lead and he eventually won from Jack Findlay by 34s, his fifth victory from six starts.

Barry continued with Suzuki in 1977 for the fifth consecutive year and, despite being World Champion, he continued to use his famous number seven, adopted at the beginning of 1974, instead of taking the number one plate. With Steve Baker and Johnny Cecotto signed by Yamaha, early indications suggested that it would be harder for Barry to win the title than it had been the year before due to the increased competition.

However, it was Barry who again ended the year as World Champion with six wins being taken in Venezuela, Germany, Italy, France, Belgium and Sweden and, at the conclusion of the 11-round series, he was 27 points clear of runner-up Baker. History was also created at the Belgium Grand Prix at Spa when Barry set a fastest lap of 137.149mph, the fastest lap ever recorded in a Grand Prix race.

Check out Sheene in action…

Sheene had countless battles with Kenny Roberts, dating as far back as 1974, but the biggest, and most famous, of them all was the British Grand Prix at Silverstone in 1979. Many consider the race to be one of the greatest Grands Prix of all time, Barry overcoming the speed advantage of Roberts’ Yamaha with some brilliant overtaking manoeuvres on the brakes.

The lead changed hands on numerous occasions but the verdict ultimately went the way of Roberts by just 0.03s. It was the closest Barry ever got to a British Grand Prix victory and, despite being almost 40 years ago, the race is still talked about to this day. 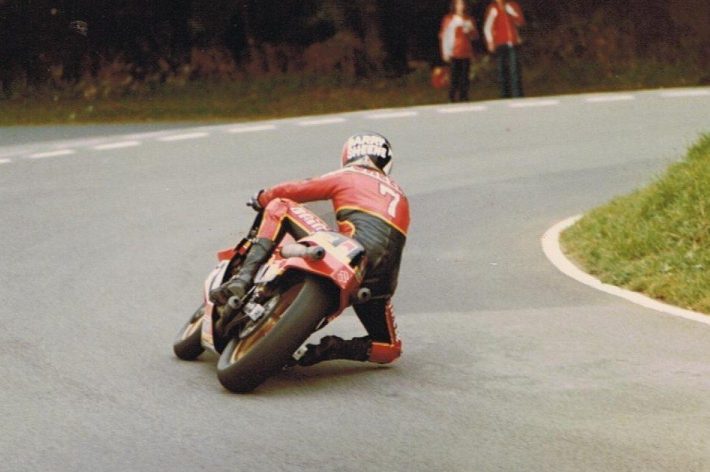 Having switched from Suzuki to Yamaha for the 1980 500cc World Championship season, it soon became clear that Barry’s privateer TZ500 Yamaha was no match for the works machines of Kenny Roberts and Johnny Cecotto nor the Suzuki’s of Randy Mamola and Marco Lucchinelli. The first two rounds only yielded ten points, fifth in Italy and seventh in Spain, and it was a disappointing year – he knew if he was to have any chance of fighting for the 500cc world title again he’d need better machinery. Mitsui, Yamaha’s British importers, agreed and they worked tirelessly to get him back in favour with the company in Japan.

Having impressed Yamaha’s top brass in an invitation event at Sugo, Japan, he was rewarded with the promise of works machinery for the 1981 season with ace tuner Erv Kanemoto added to his team. With podiums in Italy and San Marino, he went on to take fourth overall in the 1981 500cc World Championship, the crowning moment being victory at the final round of the series at Anderstorp in Sweden which was his first victory since Le Mans, France in September 1979. It was to be his last GP won and it would be 35 years before a Briton won a premier class Grand Prix again, Cal Crutchlow finally ending the famine in the Czech Republic in 2016.

Those results saw Barry rise further in Yamaha’s estimation but it wasn’t until the 1982 British Grand Prix at Silverstone that he finally received the same specification bike as Kenny Roberts. With rostrum finishes in Argentina, Austria, Spain, Holland, Belgium and Yugoslavia, the new OW61 that Yamaha had promised him was finally delivered to Barry on the Monday of race week although he only needed a few laps to realise that major changes were needed to the frame geometry. The changes were duly made and he got the bike back in time for unofficial practice on Wednesday 28th July where his lap times were impressive.

However, just after 4.30pm, Barry swept round Abbey Curve and ploughed into the wreckage of a 250cc Yamaha that had been in a collision with a 125cc MBA moments earlier. Barry hit the stricken machine at over 160mph smashing the front end off the V4 and he was subsequently catapulted into and over the bars. Launched some 30 feet into the air, Barry landed over 100 yards further down the track unmoving and unconscious whilst was torn and twisted into numerous lumps of metal.

The impact of the collision had seen his knees crush his hands, snapping his left wrist and smashing his knuckles. The force completely shattered his lower legs and the only thing keeping them attached to his upper legs were the arteries. It took two seven-inch pieces of steel, two five-inch plates and 27 screws to piece his legs back together with a further two plates and five screws used to fix his shattered wrist.

The x-rays from Barry’s crash were shown on every news channel and printed in every newspaper much to the astonishment of the general public and it was little wonder Barry was labelled the ‘bionic man’. His levels of recovery astounded everyone and he was, remarkably, discharged from hospital after just three and half weeks.

Barry’s final win before retiring came at the International Gold Cup meeting at Oliver’s Mount, Scarborough. Having made his debut at the circuit almost 15 years earlier, his love for the venue never waned and he was an ever-present at September’s Gold Cup event only missing the 1982 meeting after his Silverstone GP crash.

Conditions for the 1984 meeting were far from ideal and Barry found himself locked in battle around the tree-lined circuit with old sparring partner Mick Grant and rising stars David Griffith, Roger Burnett and Rob McElnea, all of them on identical RG500 Suzuki’s. Griffith won the first leg from Grant and Barry but Sunday’s ten lap second leg saw Barry roll back the years and take the win and with it the overall victory, the fourth time he’d had his name added to the famous trophy. 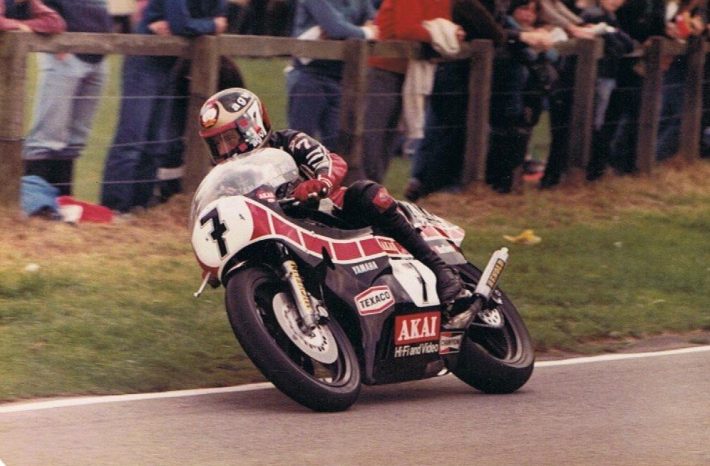 What’s your most iconic memory of Barry Sheene? Share them in the comments below…