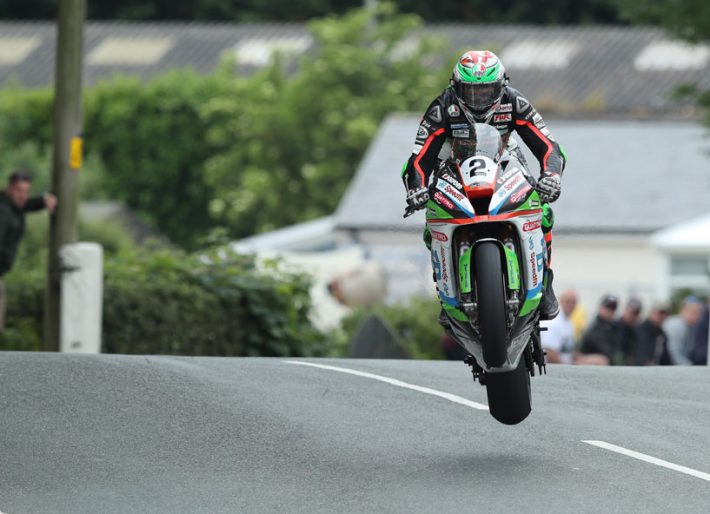 James started riding at the age of four and began racing two years later in trials races. His road racing career started when he was seventeen and he soon moved into the Virgin Mobile R6 Cup where he finished fourth in 2004. Subsequent seasons saw him compete in both the British Supersport and British Superstock 1000 Championships scoring numerous top ten positions.

The Hampshire rider’s first TT appearance came in 2008 at the age of 23, where he competed in the two Supersport races for Jackson Racing, finishing 19th in the first four lap race and improving to 17th in the second. The two results saw him not only lap at more than 119mph and win two silver replicas but also win the coveted Newcomers Trophy. Later that year, he finished second in the Dundrod 150 National race, and his results in his first year on the roads certainly got the heads of leading sponsors turning. 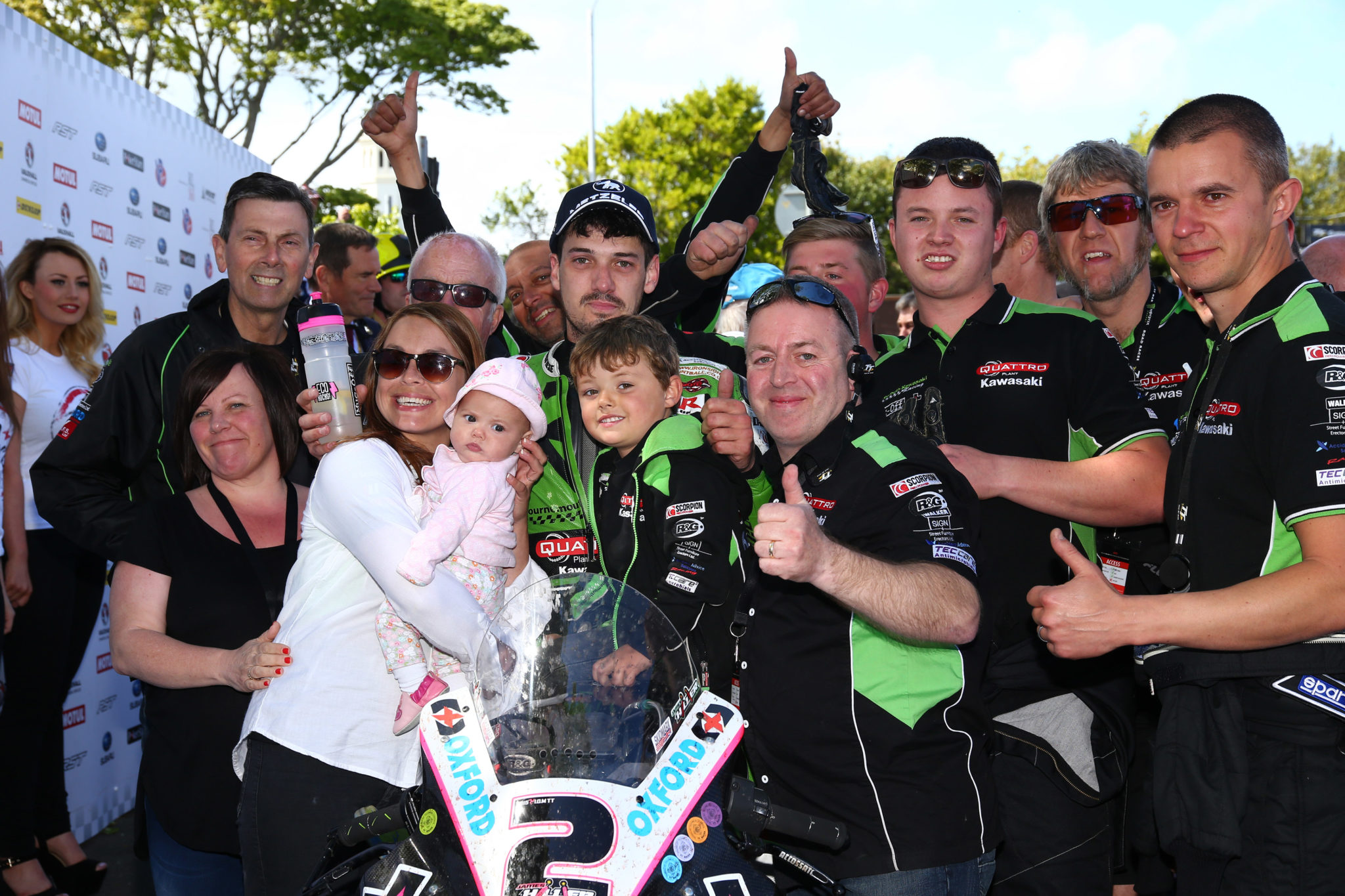 When talking to riders it becomes clear that winning a TT is the pinnacle and aim for every rider. James is lucky enough to have one to his name, winning the Lightweight TT in 2013. Having improved his results since his debut year in 2008, he soon established himself as a regular top ten finisher and having taken his first podium in 2012, the following year saw him take victory in the Lightweight by over 27 seconds from runner-up Dean Harrison, which is the highlight of James’ career to date.

As well as taking five successive podiums in the Lightweight class – one win and four seconds – James has also stood on the rostrum a further nine times – Supersport (5), Superbike (2), Senior (1) and Superstock (1). Indeed, he’s finished second on no less than seven occasions with one of his best years coming in 2015 when he finished second in the Senior and third in the Superbike and ahead of household names such as Ian Hutchinson, Guy Martin and Michael Dunlop. His fastest lap around the Mountain Course is an impressive 132.414mph which currently makes him the seventh fastest rider of all time.

One of the most impressive aspects of his TT career is his finishing record, failing to see the chequered flag just four times in 60 race starts. He’s won 52 silver replicas and four bronze and has finished in the top ten in every race he’s finished bar two since 2012, a testament to both his riding ability and the Bournemouth Kawasaki team’s preparation.

In terms of the North West 200, James has nine podiums to his name, coming second in the Lightweight race twice, second in Supersport twice and third in the Superstock and Supersport races. In 2018, he took a brace of second place finishes in the two Supersport races, finishing close behind circuit maestro Alastair Seeley on each occasion, but the highlight around the 8.9-mile circuit came in 2019 when he won the Superstock race and was crowned Man of the Meeting.

James is regarded by many as a naturally talented rider due to his consistency and the way he has competed with the best since the start of his road racing career.

Hillier had a successful North West 200 on the Quattro Plant / JG Speedfit Kawasaki, achieving 2nd place in both Supersport races, with a top lap speed of 117.078mph. Another highlight of James’ NW200 campaign was the 5th place finish in the opening Superstock race before going on to take eighth in the second. He also took a brace of ninths in the two Superbike races.

The two podiums set Hillier up nicely going into the 2018 Isle of Man TT races where he achieved another duo of podium finishes, coming 3rd in both the Superbike and Supersport 2 races. Another consistent TT week for Hillier saw him place 4th in the Supersport 1 and 5th in the Superstock races, the former seeing him miss the podium by less than two seconds.

The closing Senior race ended in disappointment for Hillier though when, lying in fourth after the first timing point at Glen Helen and chasing Michael Dunlop for 3rd, the bike bottomed out at the Bottom of Barregarrow causing him to retire from the race.

Hillier returned to the Isle of Man for the Classic TT, placing 7th in the Senior race on the 1971 Honda CB500/4, in the race won by John McGuinness although he was forced to retire from the Superbike race after hitting problems on the Oxford Products Ducati on the opening lap.

At the 2019 Isle of Man TT Hillier equalled the podium count of TT legends such as Robert Dunlop and Stanley Woods with his brace of rostrum appearances on the Quattro Plant/Wicked Coating Kawasaki’s taking him on to a total of 14. These were claimed in the Supersport races, when James took 2nd place in the opening race, just 3.64s behind Lee Johnston, and 3rd in the second encounter behind Peter Hickman and Dean Harrison.

A fine year at the TT saw Hillier claim a top 7 finish in all of the races he completed, with a 4th place finish in the Superbike race with an average speed of 129.996mph, a 5th place performance in the Senior TT, and 7th in the Superstock encounter. The fifth place in the Senior race was particularly impressive as he dropped down to 21st place on the opening lap after overshooting Ballacraine, just seven miles into the race. Despite the lost time, he fought his way back up the leaderboard and a final lap of 131.597mph helped him seal yet another top five finish.

James had arrived on the island in good spirits after a brilliant outing at May’s North West 200 where he was named Man of the Meeting after securing four top four finishes, the highlight of which was a commanding victory in Saturday’s Superstock race. His lead at one stage in the wet conditions was in excess of 20 seconds and he was able to ease back in the closing stages to secure his first win at the event.

He also finished second to team-mate Glenn Irwin in the solitary Superbike race and third and fourth in the opening Supersport and Superstock races on Thursday evening.

He concluded his season with a fine second place finish behind David Johnson in the Superbike Classic TT race. In December, he announced he would be leaving the Bournemouth Kawasaki team after a highly successful ten years and will line up instead for OMG Racing in 2020 riding BMW (Superbike and Superstock) and Yamaha (Supersport) machinery.

"Straight forward helpful advice in a way that even I..."