A phenomenon of the 1980s and 1990s, the appearance of a ‘wild card’ at his home Grand Prix or round of the World Superbike Championship, particularly the latter, was enough to cause panic amongst the regular riders. In Japan, America and the UK especially, the established field knew they had a fight on their hands just to score points, never mind wins, against riders looking to make a name for themselves in their one-off appearance.

Over the years there have been some stunning rides by wild cards – those riders who were not regular entries into the relevant Championship – and here are ten of the best.

In the 1970s and 1980s, wild cards as a name didn’t exist – any local rider was entitled to enter their home Grand Prix – so that meant there was always a chance of someone making a name for themselves. And in Britain, that usually came in a wet race or races held in mixed conditions, which was exactly what happened at the 1978 500cc British Grand Prix at Silverstone.

Kenny Roberts and Barry Sheene, the two championship contenders arrived in England with only three points separating them. The race ended in controversy though when torrential rain during the race, along with pit stops for tyre changes by both Roberts and Sheene, created confusion among official scorers.

Eventually, Roberts was declared the winner with Sheene being awarded third place behind privateer Steve Manship, who did not stop for a tyre change. Whilst second for the Brit was an amazing result, the majority of people who were there were convinced the Brit had won the race and that he’d been robbed of a sensational victory. The Leicestershire rider became British Champion and was one of the leading privateers in the UK but retired in 1980. 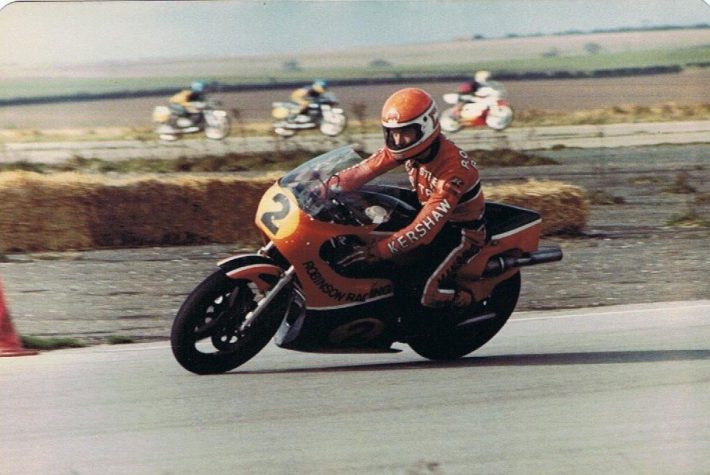 Just as Manship shocked the Grand Prix paddock in 1978, so too did Andy Watts in 1984. The Kings Lynn rider had emerged from the legendary RD350cc Pro-Am series of the early 1980s and had established himself as a leading 250cc and 350cc rider in the British Championship, earning himself a ride with the EMC team in 1984.

Watts had finished ninth in Holland that year and entered the British Grand Prix at Silverstone where he promptly had the ride of his life as he battled with factory riders including World Champions Carlos Lavado, Christian Sarron and Anton Mang. The high-speed airfield circuit produced some fantastic racing back then as up to ten riders battled for the race win, slipstreaming each other constantly along the straights. Sarron got the win but Watts took second just 0.24s adrift.

Such was the depth of the field Mang could only manage 11th and future 500cc World Champion Wayne Rainey was back in 14th. Although he competed in a number of Grand Prix races afterwards, again with the EMC team, Watts never scored another point and after a crash at Mallory Park in July 1986, he was forced to retire due to nerve damaged in his arm. 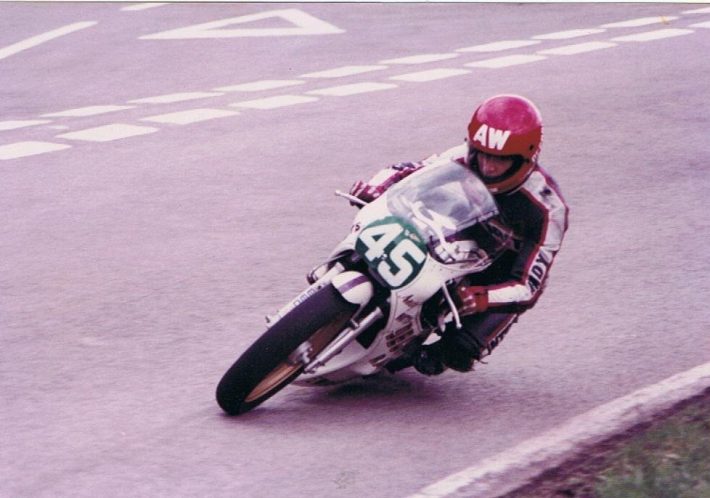 After a 20-year absence, the Grand Prix World Championship returned to Japan and the Suzuka circuit in 1987 and although a number of the leading riders had competed at the circuit before, at a traditional end of season International in November or at the Suzuka 8 Hours Endurance event, their knowledge of the figure of eight circuit was relatively limited.

Their knowledge of the Japanese local riders was also limited but the regular Grand Prix riders were still expected to win despite many of the home contingent being mounted on factory machines. Indeed, both the 500cc and 250cc races were flooded with NSR Hondas and YZR Yamahas and although Randy Mamola took the wet 500cc race from Wayne Gardner, local star Masaru Kobayashi defeated, amongst others, Anton Mang, Sito  Pons and Reinhold Roth in the 250cc race to claim a famous victory by almost thirty seconds. To prove it was no fluke, he finished third the following year in perfect, dry conditions.

The first year of the World Superbike Championship in 1988 saw a number of surprise winners, as riders who were relatively unheard of outside of their own country took full advantage of the rules – whereby riders were competing on equal machinery – to exploit their local circuit knowledge. It was a trend that would repeat itself for the next two decades but none went on to have a greater career than Michael Doohan.

The Australian had only started racing the year before but the Marlboro Yamaha Dealer Superbike team recognised his raw talent and snapped him up for their domestic season in 1988. The then 23-year old had signalled his intentions at Sugo in Japan when he took the second race victory and when the series visited Oran Park near Sydney, he promptly did the double.

It looked almost a certainty that Yamaha would promote him into one of their 500cc Grand Prix teams in 1989 but Honda snatched him from under their nose and the rest is history as he went on to win five successive 500cc World Championships between 1994 and 1998.

Just like Japan returned to the 500cc and 250cc World Championship calendar in 1987 after a lengthy absence in 1987, so too did America in 1988 with Laguna Seca hosting the first US Grand Prix since 1965. A number of local riders were handed factory rides for the races, including Jim Filice in the 250cc category, the Californian riding an NSR 250 Honda in what was his first ever Grand Prix.

Standing at just 5’2, Filice was ideally built for a 250cc machine and, having qualified in second place, the race saw him battle with John Kocinski, Sito Pons, Dominique Sarron and fellow wild card and similarly-mounted Bubba Shobert before romping to victory by over twenty seconds.

Filice finished second the following year, just behind Kocinski, but was unable to secure a full-time ride and although he went on to make ten further GP appearances between 1991 and 1995 he failed to score another point.

1991 was the third time the 125cc World Championship had got underway at Suzuka in Japan and whilst local riders had impressed in previous years, Noboru Ueda did what none had done before by winning his home GP. Ueda’s win prompted an influx of Japanese riders into the 125cc series on a full time basis and, along with Italian and Spanish riders, they were the dominant nation in the smaller category class.

On the back of his home win, which he won by 2.5s from future team-mate Fausto Gresini, Ueda went on to contest the full series that year and added another win in Spain, also firmly putting his Technical Sports team on the map. The team would go on to win numerous other races with other riders whilst Ueda, who remained in the 125cc class for his entire GP career – which lasted until 2002 – finished second in both the 1994 and 1997 World Championships, the latter behind Valentino Rossi. After a 12-year Grand Prix, which yielded an impressive tally of 13 wins and 39 podiums, he retired at the end of the 2002 season, without doubt one of the best riders never to be crowned World Champion.

The final round of the 1994 World Superbike Championship was set to be a showdown between Carl Fogarty (Ducati) and Scott Russell (Kawasaki), and with the latter having got the verdict in 1993, Fogarty sought revenge over his bitter American rival. He duly took his first WSB title but the meeting was all about a local hotshot called Anthony Gobert.

The 19-year old had won the 1994 Australian Superbike Championship for Honda and had already competed in the Japanese round of the ’94 WSB series but the official factory Muzzy Kawasaki team snapped him up for the races at Phillip Island in a bid to held Russell’s world title bid. Gobert secured pole position and took third behind the battling Fogarty and Russell in race one but when it became clear Russell had no answer to Fogarty in race two, Gobert went on to take the win and become the youngest ever WSB race winner.

Although he had the latest works Kawasaki ZX-7RR at his disposal, Izutsu was considered to be a solid rider but nothing more and wasn’t expected to be a front runner when the WSB paddock rolled into Sugo in 2000 as he’d never won a round of his domestic series. However, he promptly pulled off a remarkable double victory to shock not only his Japanese counterparts but also the likes of Colin Edwards, Troy Bayliss and co. He finished second and third the following year but, despite earning a ride for the full season in 2002, his trips abroad were less successful with sixth place his best finish.

Three years in the World Superbike Championship between 1996 and 1998 – two years with the factory Ducati team and one with the works Kawasaki squad – failed to see Neil Hodgson make a significant impression and he only managed one podium and a best finish of ninth overall (in 1997) during this period. It resulted in him returning to the UK in 1999 and an assault on the British Superbike Championship for the INS/GSE Ducati team.

Fifth overall in 1999, Hodgson would go on to win the title in 2000 but it was his appearances as a wild card in the British rounds of the WSB series that year that put him back on the International map. There were three rounds in Britain that year and at the first, at Donington Park, Hodgson finished first and third and then at the second, at Brands Hatch, he won his second WSB race and followed it up with second in the other.

In his three appearances as wild card that year he scored 99 points to finish 12th overall and moved back into the series full time in 2001, going on to win the title in 2003 as part of the official Ducati factory team. 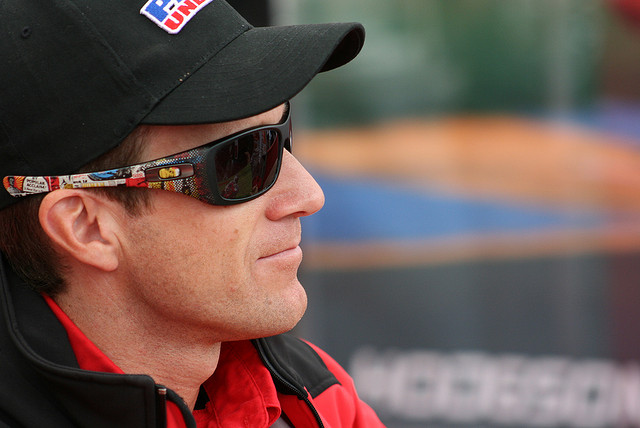 2003 was the last year the World Superbike Championship had open competition amongst the tyre manufacturers as the whole field moved to a Pirelli control tyre in 2004. It ultimately meant that wild card riders has we had become accustomed to would become largely a thing of the past so that year’s round at Brands Hatch was the last time, for a few years at least, that British riders got to pit their wits against the world’s best.

Shane Byrne had finished fourth in the 2002 British Superbike Championship, taking four points scoring finishes and a best finish of fifth in his WSB wild card rides that year. He arrived at Brands Hatch in 2003 as a different prospect though as he was romping away with the BSB title on Paul Bird’s Monstermob Ducati. In front of his home crowd, he took a resounding double defeating the likes of eventual World Champion Neil Hodgson, Ruben Xaus and Regis Laconi and it was the last British wild card ride of note for some time, probably until Donington Park in 2008 when Tom Sykes and Cal Crutchlow both took podiums. 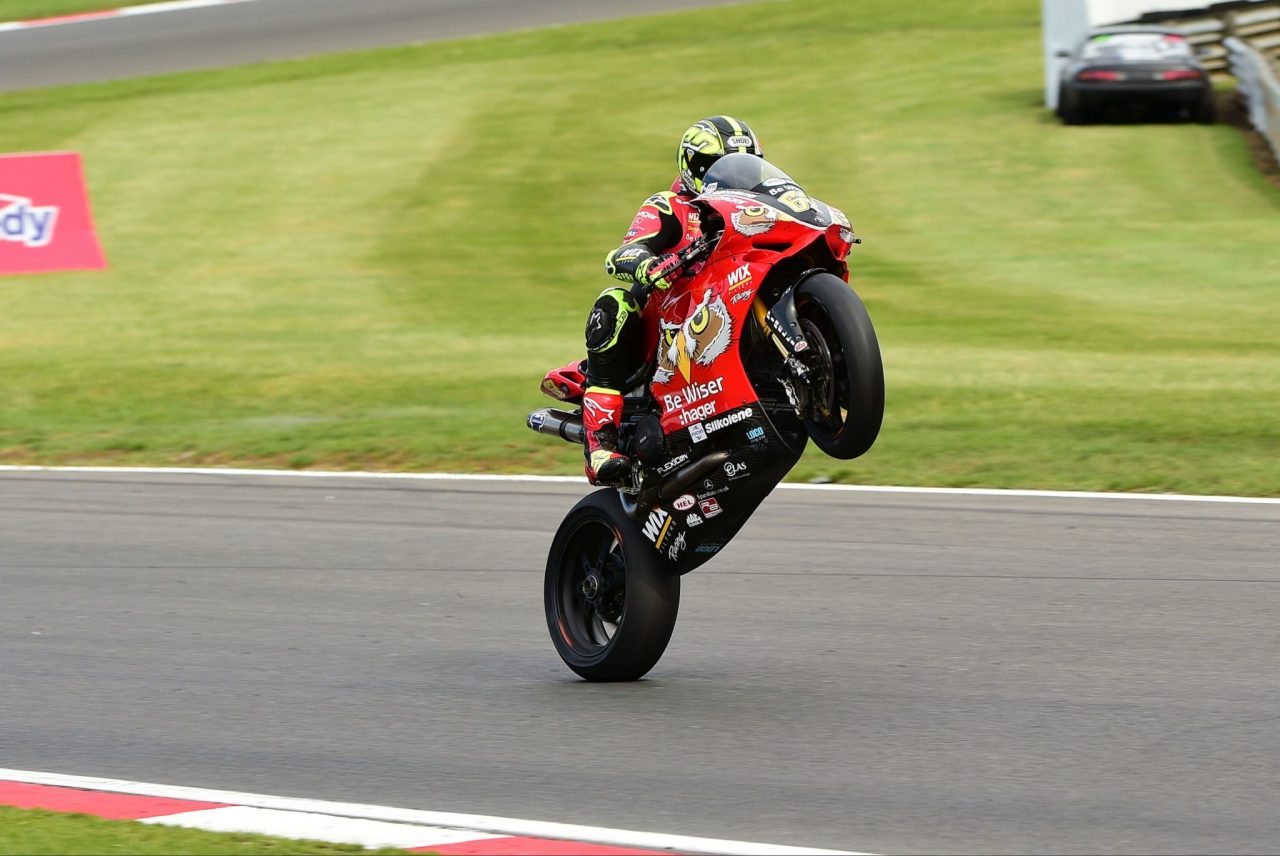 What’s your favourite wild card appearance? Leave your comments below…

"Easy to understand and straight forward no hassle"