It was way back in 1963 that Mike Hailwood set the first ever 100mph lap of the Dundrod circuit, some six years after the mark was achieved at both the North West 200 and Isle of Man TT – however, with the circuit layout remaining unchanged, it has since become the fastest circuit currently in use anywhere in the world with the outright lap record now standing at a breathtaking 136.415mph.

Although the North West 200 remained the fastest road race during the 1960s, 70s and 80s, the gradual introduction of more and more chicanes – something that only happened for at the Ulster in 1992 and 2000-2001 – slowed its progress and by the turn of the Millennium, Dundrod had taken over at the top of the pile.

With the first 120mph lap going the way of Joey Dunlop in 1984, the landmark year proved to be 2003 when Adrian Archibald set a new outright lap record for the course at June’s Dundrod 150 races. The lap was significant as it finally bettered Tom Herron’s lap of 127.63mph at the 1978 North West 200 which, up until Archibald’s stellar effort, was the fastest ever witnessed at a UK road race. 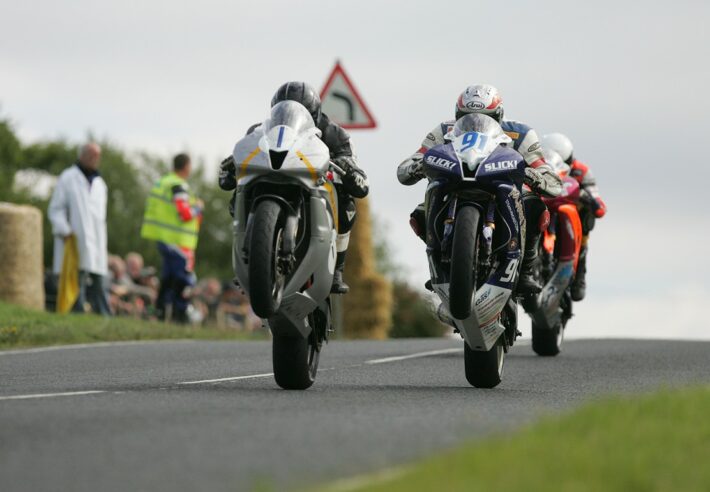 Since then, the lap speeds have continued to increase with the fast, flowing and smooth Dundrod course playing host to the best road racers in the world. Safety improvements, namely the removal of countless trees, fences and hedges have helped too and Guy Martin had the honour of setting the first official 130mph lap in 2006 although John McGuinness had actually achieved the speed in qualifying earlier that week.

32 riders have now lapped the 7.4-mile circuit in excess of 130mph with Ian Hutchinson being the first to break the 134mph barrier in 2016. However, his mark only lasted one year as no less than five riders bettered this at a stunning 2017 meeting, Dean Harrison setting a new outright lap record of 134.614mph.

Weather kept speeds down in 2018 with Davey Todd and Paul Jordan the only two new members of the 130mph Club whilst the Isle of Man TT finally upstaged the Ulster GP as the fastest road race in the world with Peter Hickman’s lap around the Mountain Course in June being 135.452mph.

However, it only held the title for just over a year as Hickman went quicker still in the opening Superbike race at the 2019 UGP. He lapped over two and a half seconds quicker than Harrison’s 2019 lap with a sensational speed of 136.415mph seeing him claim the outright lap record and have the unique honour of being the fastest ride at both the Ulster GP and Isle of Man TT.

Two riders currently have the honour of lapping at more than 130mph on their debut, Dean Harrison and Peter Hickman, but one of the most impressive performances from a debutante came in 1999 from, perhaps unsurprisingly, David Jefferies.

Riding the V&M Yamaha R1, DJ not only set a stunning newcomer’s lap of 126.858mph, he also broke the outright lap record and won the second Superbike race!! That lap stood for 11 years before it was broken by Dan Kneen and that year in 2009 was particularly strong for first timers with Kneen, Aussie David Johnson, Brian McCormack, Derek Brien and Dan Stewart all recording impressive speeds. 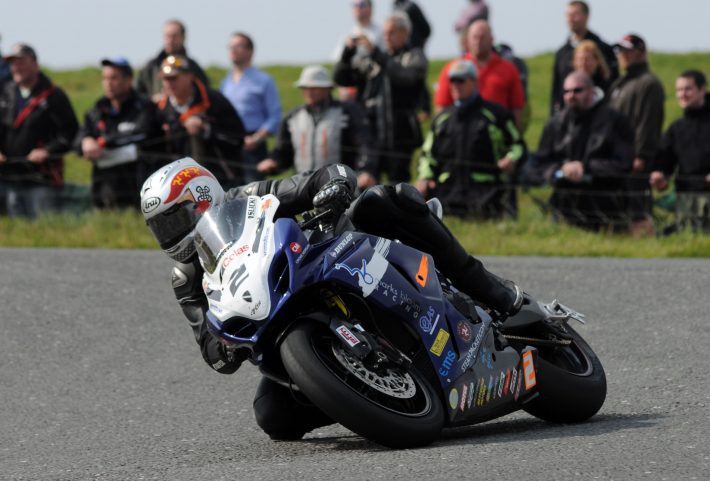 Two years after Kneen had lapped at 129.254mph, Harrison added his name to the record books when he became the first ever newcomer to break the 130mph barrier. Riding the RC Express Racing Kawasaki, Harrison had already shone at that year’s TT and he brought that form to Dundrod with a series of top ten finishes.

However, he only held the title of best newcomer for two years himself as Hickman, just as he had done at the North West 200 and Isle of Man TT, set the fastest ever newcomers lap at the Ulster in 2014. His best lap was 131.198mph and, just a year later he turned that potential into reality when he won the second Superbike race.

The 2016 meeting saw Daniel Hegarty become the sixth fastest newcomer ever with the TT Privateer’s Champion lapping at almost 128mph as he posted a series of top twelve finishes.

It was in 1979 when Joey Dunlop won his first races at the Ulster Grand Prix, victory coming in the Superbike and 500cc races, and just as he did at practically everywhere he rode, he never stopped winning around Dundrod.

With wins across the classes, Dunlop was still winning some 20 years later and although 1999 proved to be his last ever appearance around the 7.4-mile course, yet another win was taken in the Superbike class – making it 24 in total – whilst he was also on the podium in the second Superbike, and 125cc races too.

Onboard lap with Ian Louger…

The closest anyone has got to Dunlop’s record total is Ian Lougher who recorded 18 wins between 1992 and 2013, a mammoth 21-year period. Like Dunlop, Lougher had great versatility and the Welshman won races in the 125cc, 250cc, Supersport, Superbike, Superstock and Production categories.

Next up with 14 wins is Phillip McCallen who achieved all these victories in just a six year period, blazing a trail before him like he had done at both the North West 200 and TT. He’s now only one ahead of Bruce Anstey, the Kiwi having taken win number 13 at the 2017 meeting as he won the feature Superbike race for the third time in four years – at the age of 48!

Anstey’s total was matched by Peter Hickman in 2019 after his stunning, and record-breaking, seven wins. He’s already taken six wins, which placed in joint 16th on the winner’s list, but going through the programme unbeaten in 2019 meant he jumped up to joint fourth and 13 wins in just give years show just what a special talent he is. If he maintains his current form over the next two years, he’ll overtake Dunlop!!

Following them is Guy Martin who has 11 wins to his name whilst three Irish legends – Brian Reid, Robert Dunlop and Ryan Farquhar – all have nine wins whilst three motorcycle greats come after them with Stanley Woods, Giacomo Agostini and Mike Hailwood all having won at Dundrod on seven occasions. Local heroes Ray McCullough and William Dunlop also have seven wins to their name as does another Dundrod favourite Bob Jackson.

Perhaps unsurprisingly, Joey Dunlop tops the charts for the most number of podiums taken at the Ulster Grand Prix having taken 44 between 1976 and 1999. However, after sitting on 43 podiums for a number of years, Ian Lougher finally matched Dunlop’s tally in 2018 when, at the ripe old age of 55, he finished in third place in the opening Supertwins race.

There’s a big jump to the next highest total with Bruce Anstey some 13 behind Dunlop and Lougher with a total of 31 having taken another hat-trick of rostrums at the 2017 meeting, a win in the feature Superbike race and two second place finishes in the Supersport encounters.

Ryan Farquhar hasn’t competed at the Ulster since 2012 but his mastery of Dundrod can be seen in his 23 podiums and that puts him one place, and one podium, ahead of Guy Martin who would surely have added more to his collection in 2015 had he not crashed out spectacularly in the Dundrod 150 Superbike race.

Jason Griffiths may not feature high on the winner’s list but he does on the podium chart with the Welshman having record an impressive 21 rostrums in a ten-year period and that puts him level with William Dunlop who took what would prove, salad, to be his final rostrum in the second Supersport race of 2016.

As expected, the list is packed with household, legendary names and both Michael Dunlop and Ian Hutchinson climbed higher up the chart after the 2016 meeting. Hutchinson’s five podiums from his five races saw him leap up to eighth overall, just one behind Griffiths and Dunlop.

Michael Dunlop is only one place further back on 19 podiums. This puts him level with Phillip McCallen, Tony Rutter and his dad Robert. Rutter’s tally is also impressive given fewer races being held in the 1970s whilst Robert Dunlop’s total includes no less than ten in the 125cc class.

That tally was matched in 2019 by Conor Cummins who continues to excel at Dundrod with his five podiums this year and two other climbers were Peter Hickman and Lee Johnston.

Hickman’s phenomenal seven wins from his seven starts saw him dominate the meeting and his success moved him onto 17 podiums in total which places him level with Johnston who pushed him harder than anyone in 2019. He still had to settle for three second place finishes in the Supersport encounters though with the County Fermanagh rider taking his fourth podium of the meeting in the second Supertwins race. 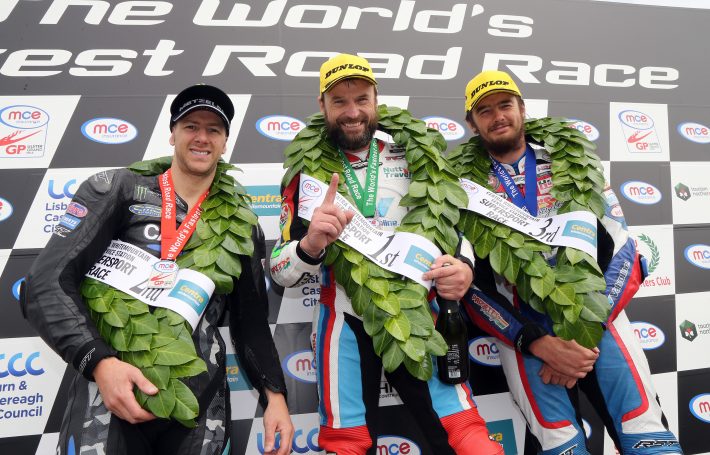 Most wins in a day

In 1996, Phillip McCallen became the first rider to win five races in a day at the Ulster Grand Prix, just he had done four years earlier at the North West 200 with victory at Dundrod coming in the two Superbike races, both 250cc races and the Supersport 600cc encounter.

That record stood for 23 years until Peter Hickman equalled it on the feature Saturday race day in 2019 but he went two better overall with victories in the Superbike and Supersport races on Thursday evening seeing him take a perfect seven wins from seven starts. Never before had someone won so many races in a single Ulster GP and whilst records are there to be broken, it’s hard to see anyone surpassing that total.

The closest anyone has come to McCallen’s five-timer prior to Hickman’s record-breaking feats of 2019 is Guy Martin and Ian Hutchinson who won four races in a day respectively in 2006 and 2016 – strangely enough, these multiple wins came at ten-year intervals, 1996, 2006 and 2016.

Riding the AIM Racing Yamaha’s, Martin won both Superbike races and both Supersport races with his only defeat coming in the Superstock class where he finished a close second to Bruce Anstey. Hutchinson, meanwhile, had his day just this August taking both Superbike races and the Superstock race on the Tyco BMW’s and the second Supersport encounter on Keith Flint’s Team Traction Control Yamaha. He took second in his fifth ride, just losing out to Bruce Anstey in the opening Supersport race.

In total, eleven riders have won three more races in a day :

Check out the riders who set these records!

Great to have road racing back, especially the Ulster GP I can’t wait for the season to start. 🏍️