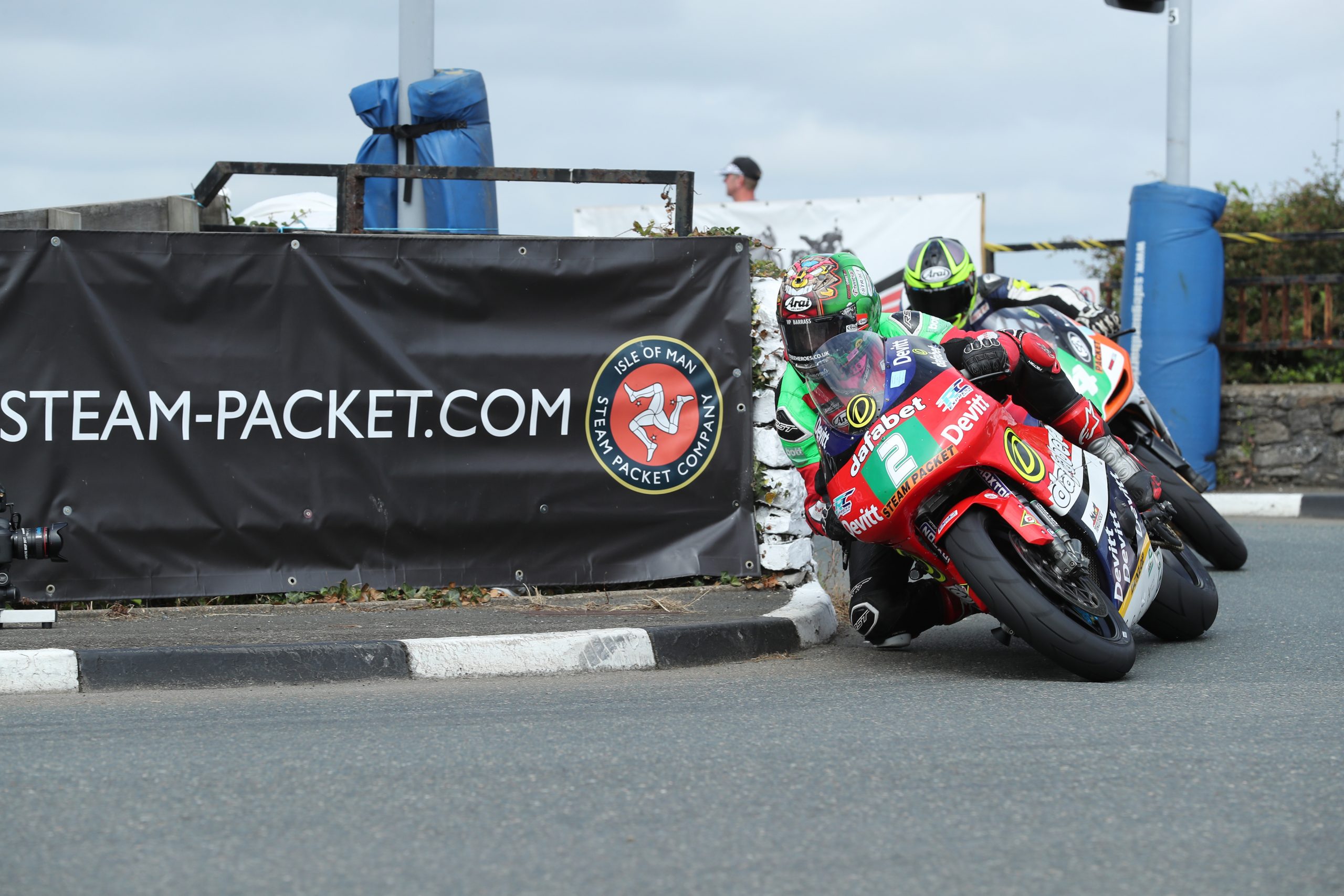 Like many riders, it was very much family influence that saw Dominic get into motorcycle racing. Dominic’s father, Mark Herbertson, is a racer himself, achieving 3rd in the Manx GP Classic 500cc race in 2011, 5th in the 2010 Classic Junior MGP and 9th in the MGP08 Classic Senior. As well as this, Mark has appeared at the TT on numerous occasions.

Dominic got his ACU licence in 2010 and after racing success, gained his national licence in 2013. He wasted no time getting involved in the Manx GP, competing in the same year where he impressed in the Newcomers B race, placing 6th. Herbertson also featured in the Super Twin MGP, where he came 18th on a 2004 Suzuki SV 650 in a race was won by Michael Russell.

Following this impressive Isle of Man debut, Dominic stepped up to the TT in 2014, where he achieved 30th in the Lightweight TT – in a race that featured his father Mark, who placed 36th. Dominic also came 36th in the Supersport 2 race and 49th in the first Supersport race; his fastest average race speed came in the Supersport 2 TT race at 115.642mph on a 2012 Kawasaki ZX-6R with his fastest lap being 117.627mph. In the same year, Herbertson made his Oliver’s Mount debut where he achieved a top six finish in the David Jefferies Cup B Race 1.

Since his TT debut, Dominic has been ever-present at the Isle of Man, with 2015 seeing him place 33rd and 34th in the Superstock and Superbike TT races respectively. This was also the year Herbertson became the North East Motorcycle Racing Club’s Super Twin champion.

Since then, Dominic has continued to turn heads and has earned the respect of fellow racers; he is now seen as one to watch in the future. A remarkable 18th in the 2016 Senior TT  saw him complete the six laps at an average race speed of 122.093mph on a 2015 BMW S1000RR – whilst also lapping at 125.024 mph. This equalled – at the time – his highest TT finish, as he also claimed 18th in the Supersport TT 1 race in the same year on a 2012 Kawasaki ZX-6R. These impressive finishes saw him finish 10th in the TT Privateers championship.

The 2017 Isle of Man TT saw consistent form from Herbertson, finishing 21st in the Superbike, Superstock and opening Supersport races. As well as this, he achieved a very credible 20th in the Senior TT, where he lapped at 126.279mph. 23rd place in the Lightweight race capped a very successful TT for Dominic and the future is looking very bright for the young man from the North West!

The 2018 Isle of Man TT was one of great consistency for Herbertson and although he recorded DNF’s in the Superbike and Senior races, in every other race he placed 14th or above to further confirm his status as one of the brightest youngsters in the sport.

Dominic came 14th in both the Supersport races, riding the WH Racing Yamaha, where he lapped at almost 124mph and went two places better in the Superstock TT where he crossed the line in 12th, this time riding a 2015 BMW S1000RR, finishing just over 6 seconds behind Daley Mathison. He also improved his personal best lap speed to an impressive 127.808mph

‘Dom the Bomb’s’ best TT finish came in the Lightweight race, where he finished 10th with an average race speed of 114.316mph in a race won by Michael Dunlop.

Dominic then returned to the Isle of Man for the Classic TT, where he achieved his first win in the Junior CTT race. Herbertson managed to finish ten seconds ahead of runner-up Jamie Coward riding a 1972 Honda CB 350 for Davies Motorsport.

Towards the back of the 2018 road racing season Herbertson was called up to the Dafabet Devitt Racing team for the Ulster GP and Macau GP. With adverse weather conditions at the Ulster GP, only two races were completed but Dominic again impressed, finishing seventh and eighth on his Dafabet Devitt Racing debut and posting a new personal best lap of the high-speed Dundrod circuit at 128.800mph. He said after the meeting:

“I was extremely grateful to be given the opportunity for the Ulster Grand Prix and hopefully I’ve done the team proud with my results. It’s obviously been a shame the weather resulted in two of our races being cancelled but I’ve got to be pleased with seventh and eighth place finishes and I was delighted to set my personal best lap. We had no testing prior to arriving here and the Kawasaki ZX-10R is very different to the BMW I normally ride but I got more and more comfortable with each and every lap and I learnt a lot. The bike handled perfectly and the team did an outstanding job so it’s been a great experience for me.”

Dominic then concluded his 2018 road racing season finishing 20th on his first appearance at the challenging Macau course.

2019 saw Dominic join Davies Motorsport for the full season, the Classic racing specialists having their first foray into the International road races and modern bikes. At the 2019 Isle of Man TT Herbertson achieved two top 10 finishes, with his highest position coming in the Lightweight TT race where he finished 9th with an average speed of 117.258mph. Dom’s other top 10 finish came in the Senior TT event in which he came 10th, beating 11th place Gary Johnson by over half a minute. Herbertson achieved his personal best lap of the Mountain Course in this race, with a speed of 129.587mph.

The North West 200 saw mixed conditions across the two days of racing and Dominic’s solitary finish came in the first Supersport race when he took a solid 17th place. Better weather at the Southern 100 saw him well to the fore and although he was forced to retire from the feature Championship race, he took a strong fifth in the opening Supersport race and backed this up with 8th and 10th in two of the Superbike races. He also lapped the 4.25-mile Billown circuit at more than 110mph for the first time with a lap of 110.490mph.

His best results though came in the two Supertwin races where, drafted into the Dafabet Devitt Racing team to replace the injured Paul Jordan, he won both encounters. Meanwhile, his good season continued at the Ulster Grand Prix where he took three top ten finishes in the Supersport races – 7th, 9th and 10th – as well as claiming 12th in the Superstock race.

He was unable to repeat his win of the previous year at the Classic TT but stood on the podium once more with 3rd in the Junior Classic race and his season concluded at the Macau Grand Prix again with a solid 20th place.

"Straight forward purchase and I was able to correct an..."