British Superbike and Isle of Man TT legend, Steve Plater, recently joined the ranks of former racers turned team managers when he took up the role with Devitt-sponsored SYNETIQ BMW Motorrad for the 2022 BSB season.

Now almost 12 months into the job, Steve is happy to discover that team management is proving every bit as rewarding as riding. We caught up with him fresh off the back of the team’s double win at Cadwell Park to find out how his first season is panning out.

When SYNETIQ BMW team owner, Phillip Neill, was looking to step back from the front line of racing, he approached Steve Plater with the idea of being his day-to-day replacement. Despite the rider-turned-manager storyline being a familiar one, Steve himself was initially sceptical.

“I was already quite friendly with Phillip and I’d been coaching both the team’s riders, Andrew Irwin and Danny Buchan, in 2021,” Steve explains. “It wasn’t that I didn’t want to work with the team, I just wasn’t 100% sure due to my own competitive nature.”

It turns out that once a motorcycle racer, always a motorcycle racer and Steve’s reluctance lay in not being fully in control of the outcome on track. He laughs, admitting he thought he might “get the hump” if the riders weren’t getting winning results straight away.

Ultimately though, that desire to get results was what made him accept the job. “I knew that the fire I’ve always had in my belly to win races is still there, even if I’m not the one riding the bike anymore.”

Steve got to work over last winter, straight in at the deep end with pre-season testing and preparation for the 2022 British Superbike Championship. While he’s no stranger to the inner workings of a race team, this is his first foray into management proper.

“I was a rider-manager years ago, but it was quite different back then,” he says. “I’ve also been involved in World Endurance, so I’ve done bits and bobs here and there, but I’ve never done it full-time and day-to-day.

“A lot of the job boils down to people management really. Not just the riders, but the whole team. It’s my job to address any problems, iron out any issues, keep on top of any negatives that might show up, forward plan for all events and eventualities.

“It’s about creating an environment in which everyone is happy. From the riders to the crew chief to the electronics engineer. Whoever you are, if you’re not happy, you’re not going to perform well, so we make sure everyone is as happy as possible.”

While motorcycle racing is of course a team effort and it’s the cumulative work of many that gets results, the final push is ultimately on the shoulders of the riders. Steve’s aim is to bring out the best in them and help them realise their potential in the racing environment. 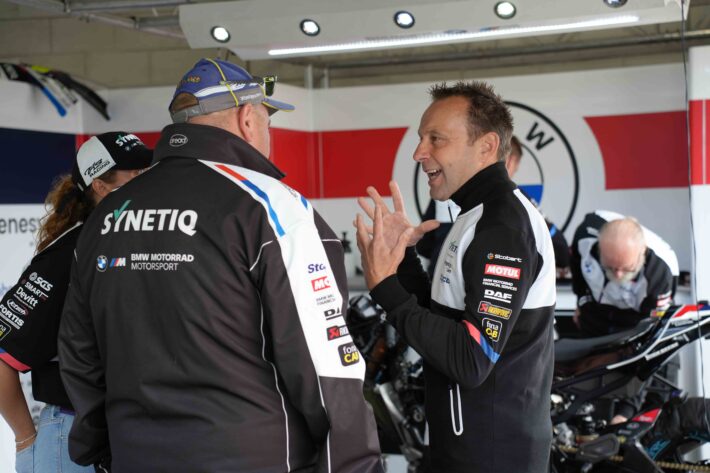 “I’ve looked after the RC390 Cup for KTM for two years and the Ducati TriOptions Cup for six years, so I already had some experience overseeing riders,” he explains “Last year, Ducati was 60 riders, so only two riders feels like a piece of cake to some degree!

“In all seriousness though, these guys are under a lot of pressure and it’s up to me to make sure they’re ok, especially when the chips are down. It’s easy when things are going well and you’re winning, but when the going gets tough, that’s when they really need the support.”

As racing seasons go, it hasn’t all been plain sailing for the SYNETIQ BMW Motorrad team. After a great opening round at Silverstone that saw Andrew Irwin on the podium, the team has been through some challenges at subsequent events.

This is where Steve’s own experience as a racer really makes a difference, giving him a level of empathy and understanding in areas that other team managers might be lacking. Having experienced the high and lows of racing first-hand, he knows how to handle most situations.

“I’ve raced with so many different teams in so many different championships,” he says. “I’ve been at the top of my game and down in the doldrums. The chances are that whatever the riders are going through, I’ve been through it too.

“We’ve had everything thrown as us over the last 12 months. It’s been a difficult season and the guys have had to dig deep. I’ve had to identify what they respond to and adapt my management style to bring the best out in each of them.

“It’s nice to be able to instil confidence in Andrew and Danny and help them turn their fortunes around. As an ex-rider, I know what they need and, perhaps more importantly, what they don’t need in the garage to harness positivity.”

That hard work seems to have paid off, with the seventh round of the season at Cadwell Park seeing Danny Buchan win two and out of the three races. Andrew Irwin, meanwhile, was also back on the pace in what Steve terms “a very, very competitive environment.”

Steve has been involved in BSB for over 20 years and has witnessed a lot of change during that time. He admits that today’s championship is a different ballgame to that of the early 2000s, with riders under far more pressure than he ever was.

“Everything is so good now,” he says. “The tools, the tyres, the motorcycles. That makes for a very fine line between placing top three and struggling for top ten. You’re only talking a few tenths per lap, so the heat is on in every single session.”

On top of that, the riders are dealing with everything else that comes with modern racing, whether that’s funding their own rides, bringing in sponsors or dealing with the increased demands of the job, not least the existence of social media.

“It’s fine having a good session and popping something on social, but it’s the negative side that can really start to effect the riders mentally,” he explains. “Everyone has an opinion and it’s not always positive. You can brush it off to some extent, but I really do believe that some of the guys are badly affected by it. I never had to deal with that level of scrutiny.

“When you’re winning it, it’s all a piece of cake. Everyone is blowing smoke up your backside every two minutes, but when you’re not, you feel like you’re constantly having to justify why you’re not quite there. It’s a hard part of any sport.”

Luckily for the SYNETIQ BMW riders, the latter half of the season has been far more positive. The Cadwell victories have given the team a much-needed boost, with Steve citing the Lincolnshire round as the highlight of the season so far.

“After coming through winter testing, changing things around a bit and going down a different route, the podium at the opening round was a sigh of relief, really,” he says. “Confirmation that we were going in the right direction.

“But the feeling at Cadwell was something else. I’m sitting here now, a few days afterwards and I’m still peaking. I obviously had that fire in my belly to win when I was riding competitively, but I wasn’t sure how I was going to react when one of the boys won a race.”

Steve seems almost surprised to find that the emotions he went through were so strong. “You have a feeling within your body when you win that you just cannot explain to people. That feeling is still there even though I’m not the one on the bike, and I want more of that.”

With four events and 12 races left of the season, Steve could well be experiencing more of that winning buzz before the year is out. However, he isn’t planning on piling any more pressure on his riders as they navigate the final rounds

“Realistically, Danny is only 14 points off the Showdown,” he ponders. “Of course, it would be nice for him to get there, but I would prefer both riders to focus on keeping up momentum and maintaining the great pace they have both found recently.”

Despite his hesitation to take on the role, Steve has taken to team management like a duck to water (or perhaps a racer to the track). It’s reignited that innate desire to chase race wins and experience the emotional high that is so often missing in retirement.

“This was a suck it and see year, but I’m really, really enjoying it,” he concludes. “I like being able to help the riders build their confidence. I love seeing the results. The team seem happy and I’m happy. We have a good, open dialogue and so far, it’s working.”

Steve has always been a busy man in the motorcycling world, with no shortage of commentary, presenting, ambassadorship and public speaking commitments year-round, but the new team management string to his bow could well be his true calling.

"Very easy to deal with"