The latest round of the British Superbike Championship saw the series head north of the border to Knockhill and whilst most of the country basked in warm sunshine, the opposite happened at the Scottish venue with the riders having to deal with thunderstorms, rain and cool temperatures for half of the three days.

It was an opportunity for some different results to be thrown up and whilst Danny Buchan delivered, as expected given his previous form at the venue, some strong performances, the man who fared best was Scott Redding with first and second place finishes enabling him to reclaim the Championship lead.

At the beginning of the season, a lot of talk centred on whether or not Redding could master the British circuits given their quirky nature and the fact he’d only ever ridden at Donington and Silverstone before. The likes of Oulton Park, Knockhill and Cadwell Park would present challenges never encountered before and whilst only five rounds have been completed, the 26-year old has proved that learning the circuits is no problem and any kind of ‘fear factor’ has already been overcome.

It’s true that further tests lie ahead but it’s certainly been a case of so far, so good for the former MotoGP rider and he’s been fully utilising the Friday free practice sessions to learn both the circuit and how the bike works. By the time Saturday comes around he’s on the pace and even if his grid position isn’t ideal, like it wasn’t at Knockhill, his skill, talent and race craft has allowed him to come through the pack with – from the outside at least – consummate ease.

He knows he’s not going to win every race but four wins have already been recorded and he’s adapted to the BSB series quickly. As mentioned, only five rounds have been completed but with the three Showdown rounds at the end of the season being held at Donington Park, Assen and Brands Hatch, the signs are beginning to look ominous.

Whilst Redding tore through the pack from his lowly qualifying position in race one and left with a haul of 45 points and eight more podium credits, his Be Wiser Ducati team-mate Josh Brookes was unable to make the same impression with fourth and eighth place finishes all he had to show for his efforts.

Lacking a bit of confidence due to the lack of feel he was getting in the wet, the 2015 Champion didn’t look like his usual self and was particularly disappointed with his results after taking a superb double victory at the previous round at Brands.

However, Knockhill has never been kind to the Australian – it’s the only circuit on the 2019 calendar where he hasn’t won – and it shouldn’t be seen as an indicator of his season tailing off, merely just a blip. Whilst it’s true he needs to get the Ducati Panigale V4R working better for him in wet conditions, his pace in the dry is clear and the fact remains he’s only five podium credits behind Redding in the Championship table.

The next round in three weeks’ time is at Snetterton, a circuit where he’s excelled in the past and also where the Ducati has performed well so we can expect him to back at the sharp end at the Norfolk venue.

Just last month we spoke on these pages about how Danny Buchan’s BSB career had progressed these last 18 months and that was confirmed at Knockhill with his maiden victory coming in the opening race. Having taken a brace of podiums at the venue twelve months ago, the Essex rider was expected to have a strong weekend, particularly as the 1.26-mile circuit has also proven to be a happy hunting ground in recent years for all Kawasaki-mounted riders.

Quick in both the wet and dry, he was never seriously troubled for the first race win but he will have left Scotland slightly disappointed as he threw away the opportunity of a double race victory after crashing out of the second race whilst leading. Locked in battle with Scott Redding for the first half of the race, the duo exchanged positions on a number of occasions and Buchan looked to reassert his authority as he moved back into the lead at two-thirds race distance.

However, he tucked the front and crashed out but he came of age at the weekend and, unless he has a dramatic dip in form, one of the Showdown positions should be his by the conclusion of round nine in September.

Just like Redding was expected to struggle at some of the UK tracks so too was Spanish import Xavi Fores but the Spanish rider also laid that theory to rest, in the wet at least. The Honda Racing rider took a brilliant pole position after running at the front for the majority of the qualifying session and although he couldn’t convert that into a race win, a strong third place strengthened his hold on sixth place in the table and the final Showdown position. 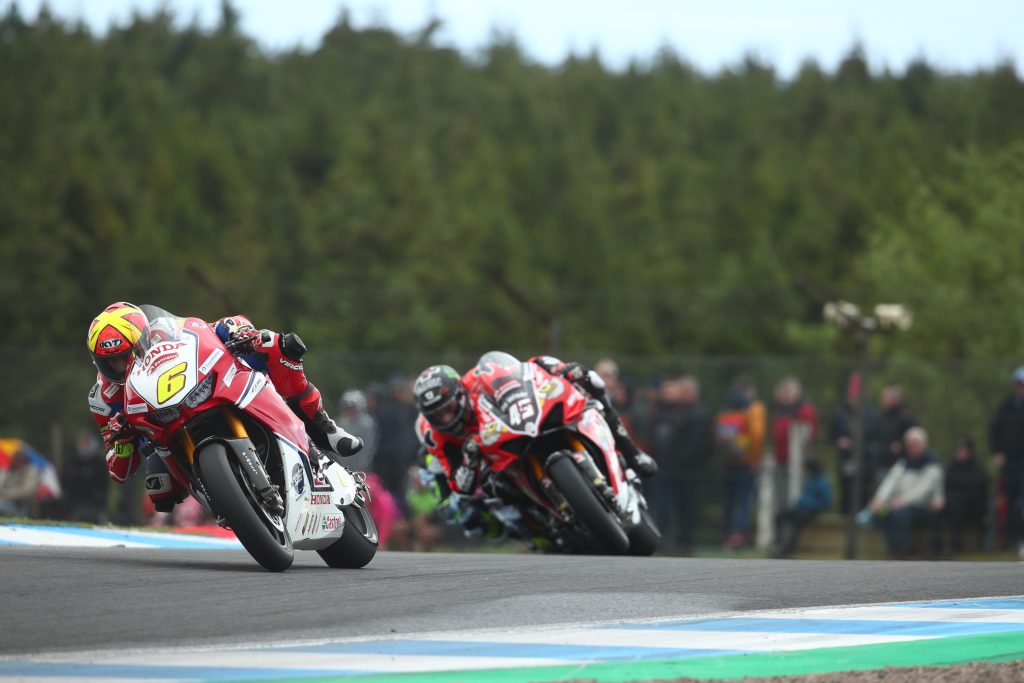 However, despite the podium, his fastest lap of the race was only good enough for a fifth row start in the second race and it was always going to be difficult to serve up a repeat performance from that far back on the grid. With overtaking notoriously difficult around the tight, twisty and undulating circuit, he could only finish in 11th place but he again impressed and he’s now 20 points clear of the seventh place rider although, of course, the former World Superbike Championship star knows there’s still an awful lot to play for.

After being forced to miss the previous round at Brands due to concussion, Tarran Mackenzie got his title challenge back on track despite suffering another spill in the opening race. Born in Scotland but raised in England, Knockhill is seen to be Mackenzie’s ‘home’ round and everything was going to plan as he sat in a comfortable second place behind Buchan.

However, the McAMS Yamaha rider crashed out to throw away the possible chance of a race win and most definitely some good podium credits but he bounced back well in race two to claim second place for another podium finish. It was his fourth rostrum of the season and only Brookes and Redding have scored more podium credits so he’s well in the mix as we approach the half way point of the season.

Team-mate Jason O’Halloran was again out of luck though as technical issues forced him out of both races and, down in 13th in the Championship table, he’ll need an extremely strong rum of form to get himself into one of the Showdown positions.

If O’Halloran thought he was out of luck, then that most definitely applied to the Tyco BMW team who ended the weekend with both of their riders in hospital with broken legs. It all looked to be going well when Keith Farmer posted the second quickest time during the wet Superbike qualifying session but a crash towards the end saw the bike land on him and he suffered bilateral fractures to both legs. Five hours of surgery followed and the Ulsterman looks set to be out for some time.

Team-mate Christian Iddon’s fourth place in race one turned their fortunes around but he then crashed in race two, just a few yards from the scene of Farmer’s crash the day before, and he too got tangled up with the S1000RR.

The spill brought out the safety car as he was tended too and he was later diagnosed with a fracture to one of his legs leaving the Northern Ireland-based team in need of at least one substitute rider, possibly two, for the next round at Snetterton in three weeks’ time.