Oulton Park Circuit is located on the Oulton estate near the small village of Little Budworth, Cheshire and hosted its first motorcycle meeting in 1953. At 2.8 miles in length, the track is characterised by rapidly changing gradients, blind crests and several tight corners and is one of the most popular venues on the calendar both with riders and spectators.

A challenging circuit in the purest sense, various improvements and changes have been made to the circuit over the years but it has retained all of its original character and has played host to some of the finest names in motorcycling. It continues two host two rounds a year of the premier British Superbike Championship.

As you head towards the first corner, Old Hall, there’s a band of tarmac just to the edge of the grass on the left that I use to set up the entry point, dropping down one gear to third (100mph). It’s quite a fast, flowing corner and I aim for a late apex that will give me a good drive out.

It’s so important to get the exit right for the next section because you don’t want anyone passing you on the entry into Cascades.

I keep to the left along the Avenue, going up two gears to fifth (160mph), before sweeping across, straight lining the right kink of Denton’s as much as possible, keeping to the right for the downhill entry of the third gear left of Cascades (90mph).

I tend to brake in a straight line for this corner, looking through the bend for the exit point. You must use the entire track on the exit as it’s important to get the drive along Lakeside (4th gear, 140mph). Be careful though as you can easily go too wideand over the rumble strip which will lose you lots of time.

Along, Lakeside, there are a number of undulations and I tend to run a little rear brake over the rise to keep the bike stable, getting into fourth before setting up the line for the third gear left of island Bend and then the right hand Shell Oils Corner. 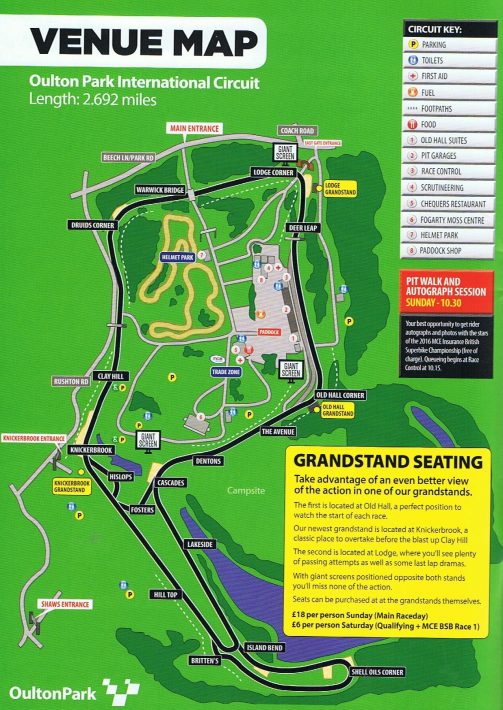 It’s a fast entry for Shell and I do a lot of braking early, dropping into second (60mph). I hit the first apex before using the natural banking of the track to scrub off some excess speed. Then I run back down for the second apex where there is good grip and good drive out. But be careful where the track levels or that will catch you out.

I short-shift two gears for the right kink before coming back to second 950mph) for the left-right-left of Britten’s. I hit a late apex on the first left before flipping the bike over for the right. Be careful of the kerb here as you can easily hit the engine casing which will fetch you off. Straight line the last left as much as possible, getting the power on and hitting third (110mph) at the top of Hilltop before touching the rev limiter on the run down to Hizzy’s, which is taken in second gear (50mph).

Line the first right up but don’t attack the section as it will bite you back. Flick the bike over for the left, using less than half the track before the right of Knickerbrook. I hit third gear (90mph) here, standing the bike up as early as possible to power out, short shifting up to fifth (160mph) for the uphill left of Clay Hill. Peel in hard to the kerb before dropping down to third (100mph) as you use a diagonal line across the track for the right hander of Druids.

The track is very rippled here so I let the bike do some of the work, drifting out to about mid track before hitting a late second apex. I use a little rear brake and I’m easy on the throttle over the rise on the exit before moving up to fourth gear (140mph) as you go under the bridge.

I brake gradually over the undulations before using the brakes harder, setting up the bike in second gear (60mph) for the final right of Lodge Corner. Again, there is a band of tarmac here and I’m just outside of it, using a late apex. Keep the bike on the fat part of the tyre, short shifting to fourth (140mph) as you crest the rise with the bike pushing you across towards the pit wall as you cross the start and finish line to start another lap.

"This is my second bike insured with Devitt straightforward no..."