Devitt got in touch with London’s Air Ambulance to find out how such a successful charity operates in such a busy city!

Pilot Andy Thompson kindly answered our questions, offering us bikers vital advise and giving us a great insight into the world of such a hard working team who manage to operate with just one helicopter…

What is your position within the helicopter operational crew?

How long have you been a part of London’s Air Ambulance?

I’ve been flying with London’s Air Ambulance for three years – I have been a fan for most of my life.

How many crew members fly in the helicopter at one time and what are their positions?

There are usually at least four of us on board: two pilots – one flying, one navigating; and a trauma team comprising of a doctor and paramedic, and sometimes a third medic.

How many helicopters does London’s Air Ambulance have?

We only have one helicopter and we are currently trying to raise money for a second through our Your London, Your Helicopter campaign.

Does the aircraft operate all hours around the clock?

The helicopter operates from 8am until sunset – occasionally later if we are already on a mission. Whilst we have permission to fly daylight hours, previously, the helicopter had to be taken off-line at 6:45PM each day as the charity was restricted by pilot and fire crew roster of 12 hours a day.

Thanks to the support of people and businesses of London, we have been able to fly longer this summer – for the first time in history. At the peak of the summer, the helicopter can be online until 21:21. Our advanced trauma doctor and paramedic resort to rapid response cars after sunset to ensure 24/7 cover for London.

What advantages does a helicopter have over an ambulance?

The average speed of an ambulance travelling with blue lights is 20mph while the helicopter flies at 150mph. We deliver an advanced trauma doctor and paramedic to the side of critically injured people in London when time is of essence. Sometimes we can reach places an ambulance can’t – like the middle of a golf course or a major road where access is blocked by traffic.

On average, how many call outs do you receive on a daily basis?

On average we attend five critically injured people each day. The fast response cars take over at sunset, delivering the same team and equipment to the patient’s side.

What are the main concerns when it comes to operating the helicopter when travelling in a busy city such as London?

Cranes, tall buildings, other aircraft… Landings can be difficult. You have to manage the risks and look out for wires, people and any potential hazards

Do you think motorcycling should be encouraged in the city? And why?

There’s no harm with motorcycling in the city as long as you ride safely.

How often do you get a call out for injured motorcyclists?

In the summer, we go to a couple of motorcyclist accidents a week. In May over a quarter of the road traffic collisions we attended involved a motorcycle.

When you receive a call for a job, what is the process you go through to make the rescue?

When the alarm goes off, the details of the job are sent through to the co-pilot and the medical team, while the captain runs up the stairs to the helipad to start the aircraft. The medics and co- pilot jump in as the aircraft is starting up. We take off as soon as we get clearance from air traffic control. We are normally airborne within 3 to 4 minutes of getting the call.

What procedures do you take to find a suitable landing position?

Our eyes and experience. We need an area about the size of a tennis court to land. Above all it needs to be safe, and as close to the scene as possible to enable the team to get quickly to the incident.

Where’s the most peculiar spot that you’ve landed the aircraft?

I can think of many, from roof tops, car parks to bridges over the Thames; and we recently landed in Trafalgar Square to save a critically injured patient. One of my particular favourites was landing in a baking factory: it was Easter time and after their hard work, all the team received fresh hot cross buns!

Is there a particular type of accident that occurs more regularly? If so what would this be?

Unfortunately trauma can happen anywhere at any time. In London we get called to a lot of road traffic collisions, and stabbings and shootings where patients are losing a lot of blood and may only have minutes to live.

What would you say has been the most challenging rescue you have had to make during your time with London’s Air Ambulance?

Landing in the middle of Heathrow Airport is always a challenge. Crossing runways and flight paths or landing between the runways.  Aeroplanes land and take off every 2 minutes. And although we get priority over other air traffic, we try to cause as little disruption as possible. Finding the patients can also be difficult when we only have a brief description from the 999 caller. We are simultaneously looking for the patient and a safe place to land.

As a charity, what are the main areas of help that you need from the public?

Awareness that we are a charity and that London only has one helicopter for 10 million people inside the M25 who live work and travel in London. We really need the public to get behind our current ‘Your London, Your Helicopter’ campaign to raise money for a vital second emergency medical helicopter.

What makes you proud to say you’re part of London’s Air Ambulance?

When former patients come to visit us, it brings home what we have done for them and their family. Without the air ambulance they would not have survived.​ 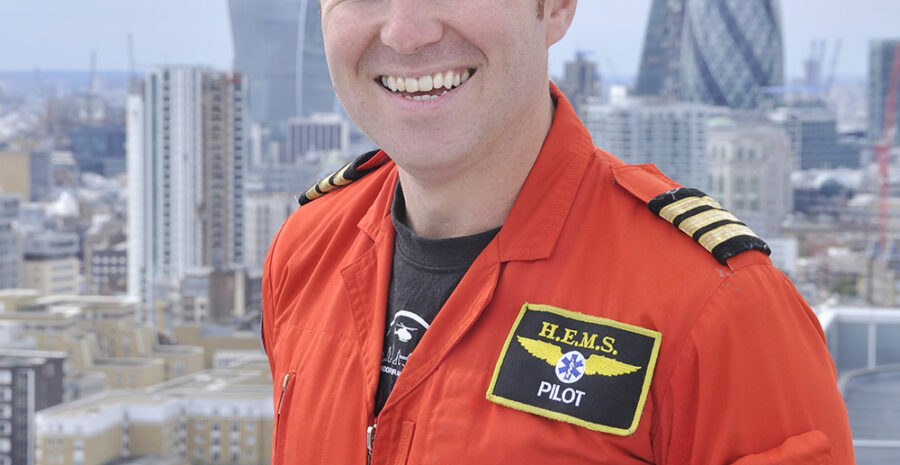 Devitt would like to say a huge thank you to London’s Air Ambulance and Andy Thompson in particular for giving us a great insight into the world behind such a hard working and successful charity.

Operating with just one helicopter in such a large city isn’t ideal, that’s why London’s Air Ambulance would like to ask for your support in their exciting new venture to raise enough money to purchase a second helicopter.