Most bike thefts are opportunists, although some are experts in the field. This listing shows that most security is not 100% guaranteed but the harder we make the proposition of stealing to those prying eyes; the more chance that the time, effort and therefore risk of being caught will make these criminals move on and look elsewhere.

Not only are there a wide range of products available designed to secure your bike, there’s also a wide range of quality, so don’t be tempted by cheap brands you’ve never heard of that don’t carry approved UK industry ratings such as Thatcham or Sold Secure.

Thatcham is a not-for-profit business funded by insurers that researches and tests a plethora of automotive security and safety devices. Thatcham is perhaps better known for its ratings of alarm and tracking systems but also tests and rates ground anchors, locks and chains.

Out of sight, out of mind – it’s a simple trick but effective. By  covering up your motorbike it could stop any potential thief from committing their next crime; they won’t know what’s underneath the cover and if your bike is worth the time or effort to steal.

Not only that, they can protect your bike from all the elements, especially the rain, if you keep it outside or when using it for commuting. Motorcycle covers start from as little as £20, and they can be a great start to tackling motorcycle theft.

Keep it simple with a lock and chain

Next step up in keeping your motorcycle safe and secure is looking to purchase a lock and chain. A quality chain and a lock is another cheap yet effective way of keep your bike secured, chains can start from £30 and you can store them in underseat storage (when riding) or alternatively carry it in a rucksack. It might cause a bit of nuisance to start with but it’s a great way of keeping your bike safe and reducing the risk of it being stolen.

As we know most thieves are opportunists, the extra 5 minutes effort of trying to tackle a chain and lock on your bike might be the thing that prevents a potential theft. 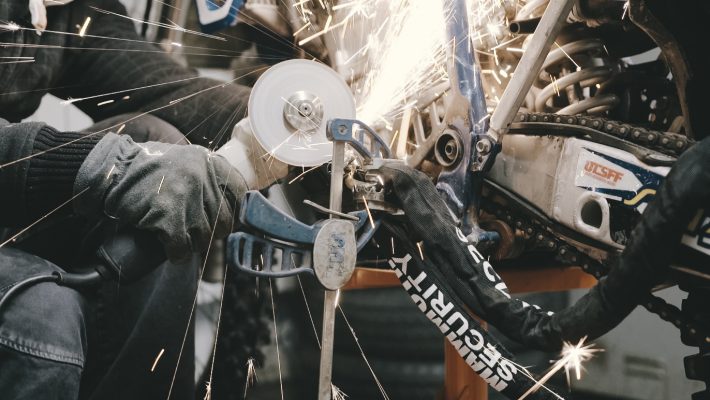 Top tips when fitting your chain:

Stay secured with a ground anchor

It’s well worth investing in a ground anchor if you’re keeping your bike locked away in the same spot, even placing one inside your garage or bike shed can really help add an extra level of protection. Ground anchors are most effective on concrete floors or walls, however brick can be used too.

The power of tracking systems and alarms

Think about the last time you heard a wailing alarm siren, did you think something was being stolen, or that the alarm had gone off due to a gust of wind, a fly inside a car or simply a fault with the system?

It’s probably the latter and police response has also changed massively as the availability and use of alarms has outstripped police resources. Years ago a shrieking alarm would have had the local constabulary blazing a trail of blues and twos to the source of the commotion but, as you can imagine, this is no longer the case as it’s no longer feasible.

Tracking systems share a similar problem — there are more tracking systems than there are police officers. So while many riders feel safe in the (assumed) knowledge that should their phone bleep to tell them their bike is on the move, all they have to do is call the police and they’ll go and fetch it. In reality this is rarely the case and will likely be a fair way down the police’s list of priorities relative to resource and seriousness of crime.

However, just as alarms are still a worthwhile addition to your bike’s arsenal off security measures, the right tracker can help when it comes to improving the UK’s abysmal stolen bike recovery rate of around 20%.

Firms such as BikeTrac and Tracker offer a 24-hour subscription-funded service that liaises with the authorities in the event of a theft, providing the police with up-to-the-minute information. Tracker is actually a partner with the police, so detection units are carried by all police patrol cars, helicopters, and even by the ports to detect modern-day vehicle smugglers. These high-end devices are well worth investing in and while not always cheap to install and subscribe to, represent the best chance of recovering your bike should the unthinkable become a reality.

A New Approach to Fighting Motorbike Theft with BBTA

I had my bike stolen & recovered in 2018 as it had a bike trac tracker on it, the copper who found the bike told me to use a lock and chain, not the steering lock, as most damage is done by forcing the steering lock and to remove the pillion rests, as thieves use these to push bike along once stolen

Fix it to a stationary object like a lamppost, mental fence etc.

That should be sufficient enough, who would go near those sort of fences.

Are you kidding with the lock and chain? I very much doubt there is any bike out there that will take a worthwhile chain under the seat, let alone the lock to go with it. Putting it in a rucksack, have you weighed a decent lock/chain combination? Have you given a moment’s thought about the dangers of coming off with it on your back? So you are left with putting it in a pannier/top box but check out the carrying capacity, weight wise of said box. My own lock/chain is 11 ½ lbs or 5.25 kg. Would you fancy landing on your back on that?
What we need is manufacturers to stop paying lip service to bike security.
Many years ago I had to move a Honda 90 that had a seized centre stand (in the down position). It was a pig to move because the stand was in the way. So far as I know only Yamaha, with the TMax has a facility to lock the stand down.
Designed in from the outset it wouldn’t be the whole answer but it could go a long way to defeating the opportunist thief.
The insurance industry is complicit in this disgraceful state of affairs by not explicitly encouraging makers to design in mechanical immobilisation methods in the first place. Electronics are, it seems easily circumvented