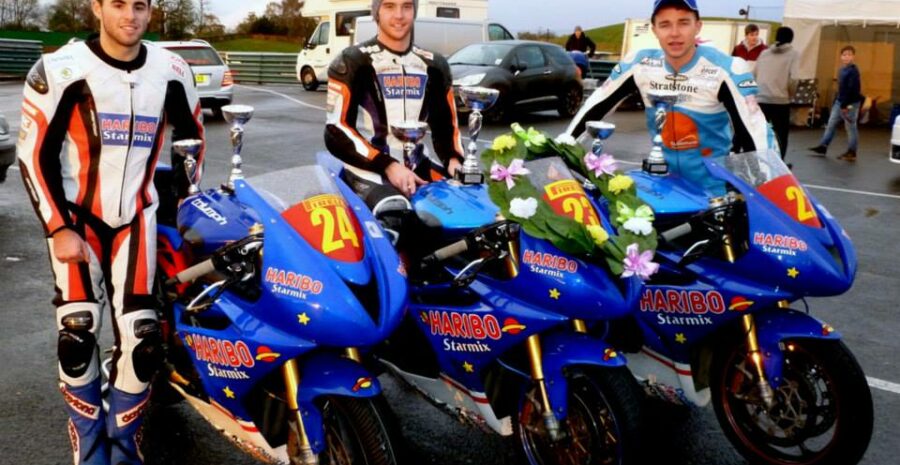 Devitt Insurance are proud to announce that our sponsor, Jordan Gilbert, is to star in the all-new-line-up for Team HARIBO Starmix ahead of the new British Superbike season.

Jordan will be racing in the Pirelli National Superstock 600 with new team mate, Chrissy Rouse, who has made previous appearances with Jordan during 2013 and 2014.

Joe Collier will be taking part in the Motorpoint British Supersort Championships.

Jordan had a fantastic year in 2014 and grew from strength to strength with each and every race. We’re excited to see what 2015 will bring.

Derek Sanders, Director of Ride Now Racing (RNR) told BSB: “We saw the potential of this young team during the end-of-season Race of the Year event at Mallory Park.”

Jordan and his fellow team mates, Chrissy and Joe, made a fantastic team stealing all three steps at the podium; they finished first, second and third in both of the Superstock races.

“We know that having Jordan Gilbert, Chrissy Rouse and Joe Collier together within our race awning will motivate all three to deliver strong results for Team HARIBO Starmix at BSB 2015.”

Devitt Insurance are extremely proud to sponsor a young and talent rider just like Jordan, and wish him the very best of luck in 2015.

The run up to racing: by Jordan Gilbert, Superstock 600

Jordan Gilbert, Brands Hatch, Round One

How I became a BSB Racer

"Competitive Price and Value Quotation The quote I received was..."