It’s quite easy to see that with over 130 wins, Ian Lougher is the most successful rider ever in the 70-year history of Oliver’s Mount. Having come out of his brief retirement, three more wins in 2016 mean his race victories now span a staggering 27-year period with the veteran Welshman having racked up 135 wins and countless more podiums. It’s certainly fair to say his total will probably never be beaten.

Ryan Farquhar occupies second and had been chipping away at Lougher’s advantage but having suffered serious injuries at the 2016 North West 200 meeting, it looks like he’s now hung up the leathers for good. His total of 109 means he’s 26 wins adrift although the Northern Irishman’s feats are perhaps more impressive given his wins came in a shorter, 14-year period.

Chris Palmer sits in third overall having narrowly missed out on joining the ‘100 Club’ and although he’s some 30 clear of fourth placed Dean Harrison, such is the Bradford rider’s dominance now at Oliver’s Mount, he could well break the 100 mark. He took 24 wins in 2016 and another 18 in 2017, when he went through the season unbeaten, and it’s hard to see anyone getting the better of him in the 600cc and 1000cc races in the immediate future.

His 2017 tally saw him overhaul Guy Martin who drops back to fifth on the all-time list. The Lincolnshire rider has been one of the most dominant riders at Oliver’s Mount for the last decade and has pretty much ruled the roost in the Superbike class. However, having sat out the entire 2016 season it doesn’t seem likely we’ll see him back racing at the Mount if indeed anywhere.

Next up is Ivan Lintin with the majority of his wins coming in the Supertwin class but the last few years have seen him be successful in the bigger classes too, the highlight being victory in the 2014 Gold Cup. He’s proven to be one of Harrison’s closest challengers and has nicked the odd 600cc or 1000cc win so, with four more wins being taken in 2017, his tally should continue to increase over the next few years.

He’s comfortable in sixth place and is now some 12 wins clear of the late David Jefferies who had a major impact on the venue during the 1990s, winning no less than five Gold Cups. Like Martin, he was near untouchable in the Superbike class although the man below him in the list, Jason Griffiths was just one such rider who regularly pushed him hard. 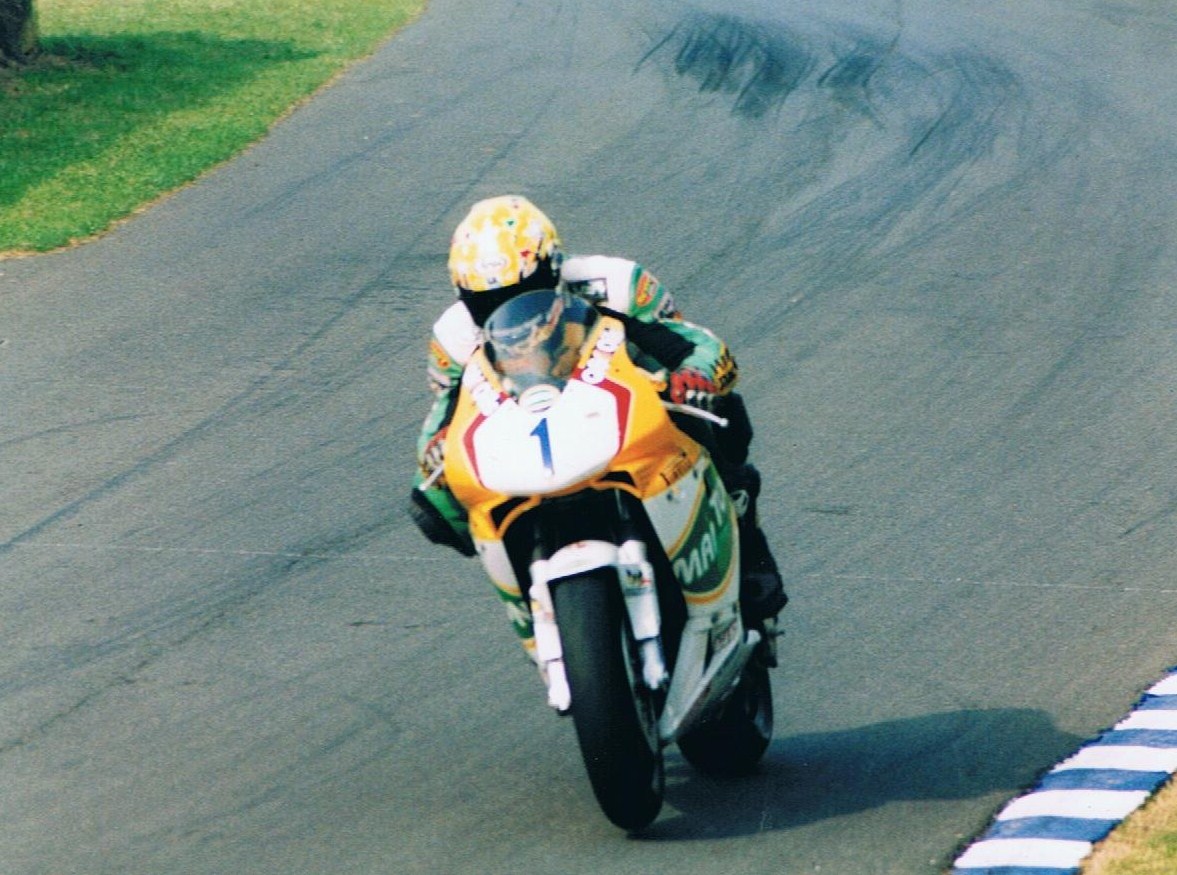 In a career that saw him start successfully on two wheels, a number of leg and foot injuries ultimately saw the late Ian Bell move to the Formula Two sidecar class and he went on to be the dominant force around Oliver’s Mount with 65 wins to his name.

Having briefly retired from the sport, Bell returned with son Carl in the chair and the 2003 Isle of Man TT winner and British Champion has more than double the number of wins of second placed Conrad Harrison. His victories span an even longer period than Bell’s with his maiden victory coming in 1993.

Bell’s total grew by two after the first meeting of 2016 and would have continued to have done so at the three remaining meetings but he tragically lost his life at the Isle of Man TT, a great loss to the sport.

Third on the list is Eddy Wright who’s tasted victory in both the F2 and Classic classes and he’s four ahead of Manxman Dave Molyneux with his 16 wins placing him fourth. The 17-times TT winner’s victories span 17 years but he’s been far from a regular at Oliver’s Mount during this time and his record would surely be higher if he had have been.

Three drivers are tied on 13 wins headed by the late Dave Saville who was one of the pioneers of the F2 class when it was introduced in 1984 and he was regularly locked in battle with Wright during this period.

Nick Crowe, like Molyneux, was never a Oliver’s Mount regular but when he was on the entry he was successful and he still holds the outright lap record for the class, set way back in 2007. Nigel Connole is the other driver on 13 wins with his victories coming in a four year period between 2004 and 2007.

Tim Reeves moved on to eight wins after his hat-trick at the 2016 Gold Cup meeting and, as expected, the list is dominated by drivers from the modern F2 era. The highest from the Open class is Charlie Freeman who took seven wins between 1960 and 1965. 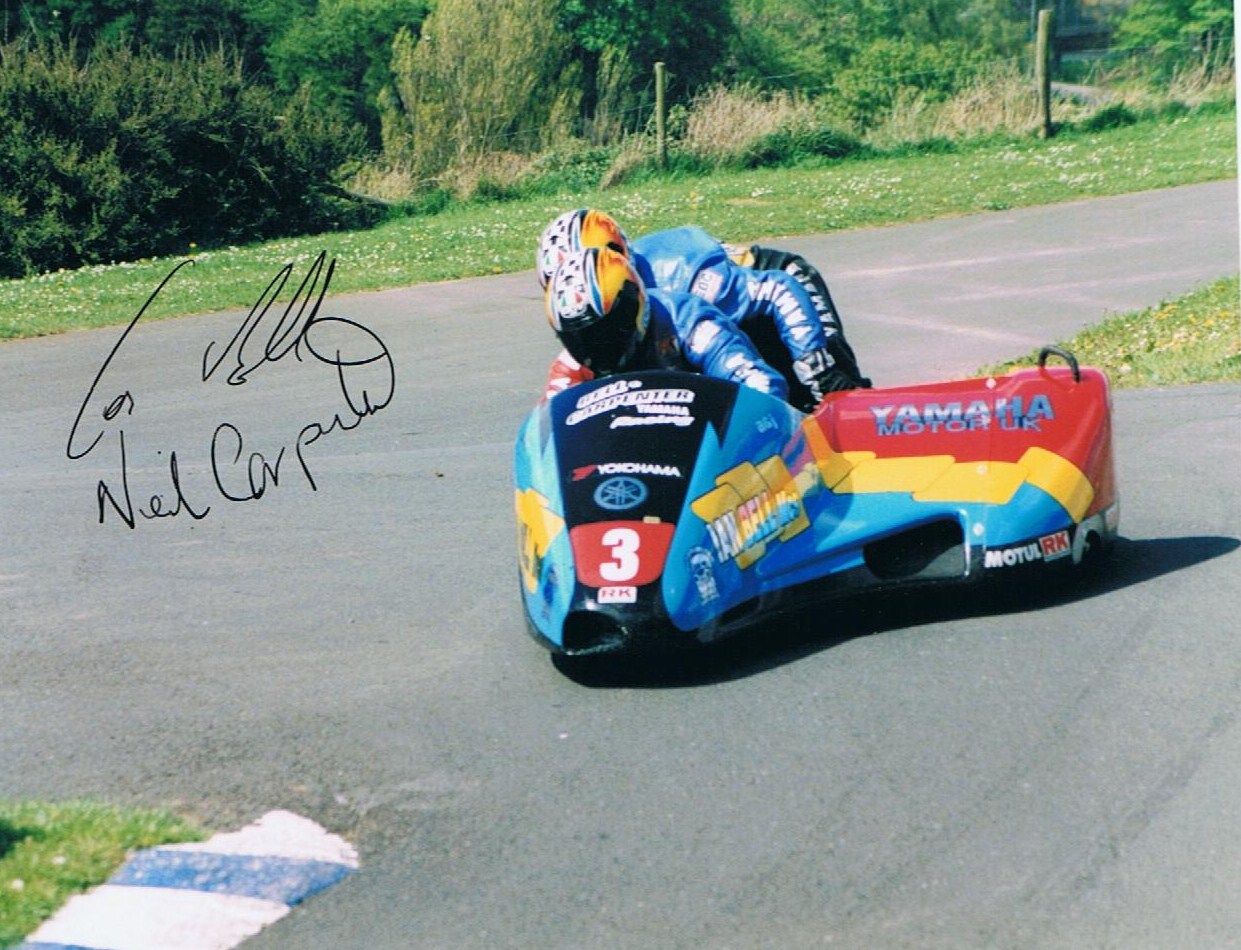 Between 1946 and 1990, the 2.43-mile Oliver’s Mount circuit remained exactly the same in its layout and the years naturally saw the outright lap record increase. Geoff Duke was one of the first great riders to hold the record, his lap of 2m05.4s on the factory Gilera in 1955 standing for seven years before it was beaten by Peter Middleton.

John Cooper claimed the record in 1965 with a lap of 2m03.8s and the first sub-two minute lap wasn’t far away, or so we thought. Cooper’s lap stood for seven years though and it took a world champion to wrestle it from the Derby rider’s grasp with Finnish legend Jarno Saarinen lapping at 1m59.8s at September’s International Gold Cup meeting of 1972. Even more amazing was that Saarinen was making his debut at the circuit!

The two-stroke era was well and truly upon us now and Charlie Williams and Mick Grant both went quicker in 1973 although Phil Read gave the four-strokes a glimmer of hope in 1975 when he lapped at 1m56.0s on the 500cc factory MV Agusta on his way to winning a second Gold Cup.

It was only a brief revival though and 1976 saw the record obliterated as Grant and Sheene went head to head on their factory Kawasaki and Suzuki machines. That year’s Gold Cup saw the duo both lap at 1m50.8s although Sheene went over two seconds quicker just a year later.

Indeed, the double World Champion would continually lap quicker over the next few years, eventually setting a best lap of 1m46.2s in 1981, a record that would stand for five years before Trevor Nation finally bettered it with a lap of 1m46.0s in July 1986.

A year later it was broken again, this time by Roger Marshall at 1m45.5s before fellow Suzuki rider James Whitham went 0.2s quicker in 1988. However, it was Carl Fogarty who finally claimed the old circuit lap record for good in 1989 when he took his RC30 Honda around at 1m45.1s.

This lap remained in the record books for good as, for 1991 the Farm Bends section was added, initially adding almost ten seconds back onto a lap of the circuit.

In 1994, multiple TT winner Phillip McCallen lapped at 1m47.5s on his Honda RC45 and he held the outright lap record for no less than ten years before Guy Martin finally went quicker. The Lincolnshire rider went quicker still over the next few years but it was Ryan Farquhar who had the honour of posting the first ever sub 1m45s lap when he went round in 2009 in 1m44.932s.

However, Martin reclaimed the record in 2013 after a titanic battle with Dean Harrison and the record remained until June 2017 when Harrison lapped, amazingly, almost a second quicker as he became the first rider to dip into the 1m43s bracket.

Daley Mathison, who didn’t even feature in the top 15 fastest riders coming into 2017, was also on sparking form that day to become the second rider ever to have lapped the Oliver’s Mount circuit.

Two more riders broke into the top 15 in 2017, the late Daniel Hegarty and Jamie Coward, the former the ninth quickest rider and someone who had taken to the circuit like the proverbial duck to water and who surely would have gone even quicker had he sadly not lost his life at the Macau Grand Prix. 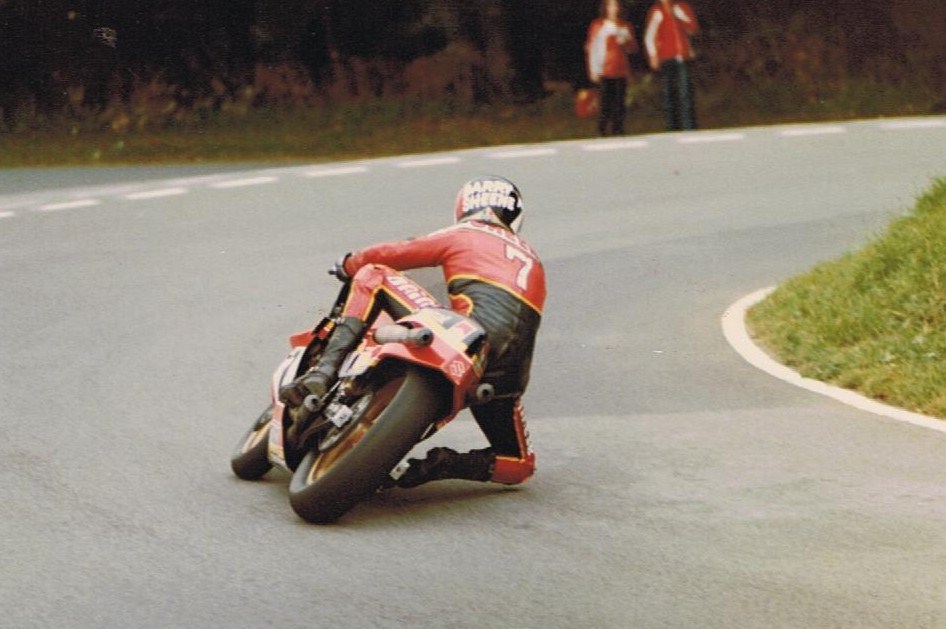 Just like the solo class, the sidecar lap record has been held by some illustrious names whether it was the Open class, which ran in 1947 and from 1954 until 1981, or the Formula Two class which has been on the programme since 1984.

Holders of the lap record in the 1950s included British ace Pip Harris and World Champion Willi Faust before Swiss legend Florian Camathias took over in 1959. During this period, most of the sidecar World champions competed at the Gold Cup and the 1960s were no exception with Helmut Fath, Fritz Scheidegger and Max Deubel amongst them.

Camathias held the lap record though from 1959 until 1965 when Scheidegger took control with a lap of 2m16.0s. This mark stood for two years before Fath took it back for Germany only for fellow countryman Siggi Schauzu to go quicker in 1970.

However, the outright lap record was shattered in 1972 by reigning World Champion Klaus Enders who took almost 10 seconds off Schauzu’s best. The pace was moving on in the sidecars just as it was in the solos and Mac Hobson restored English pride in 1974 when he not only beat Schauzu and Werner Schwarzel in the race but also brought the lap record back home.

The Geordie was the first driver to lap Oliver’s Mount in less than two minutes, which he did in 1976 with a lap of 1m58.3s. Schwarzel and his rapid Aro were hard to beat around Scarborough though and in 1977, he went almost three seconds quicker at 1m55.6s to take the record back to Germany.

This mark remained unbeaten until 1979 when Dick Greasley lapped at 1m53.8s at September’s Gold Cup meeting when only Barry Sheene and his factory Grand Prix Suzuki were timed quicker along the bottom straight!

It was Greasley who had the honour of the fastest ever lap in the Open class with his lap of 1m52.7s in 1980 never being beaten as the last race was run in September the following year. Indeed, this remains the fastest ever sidecar lap at Oliver’s Mount as, unlike the solos, the fastest lap with the Farm Bends section remains over half a second slower.

After being absent for three years, the sidecars returned in 1984 but with the smaller F2 outfits and the best lap in their first ever race was over 25 seconds slower than Greasley’s mark set four years before.

Dave Saville, Eddy Wright and Joe Heys were the main exponents for almost a decade although it was Andre Witherington who set the first sub 2-minute lap on an F2 machine in 1988. It was Saville though who had the honour of the fastest ever lap prior to Farm Bends being introduced with a lap of 1m57.3s in 1990.

Hallam vs Wright vs Fisher vs Molyneux vs Bell

After that, lap speeds were increased by over ten seconds but the 1990s saw the likes of Craig Hallam, Wright, Rob Fisher, Dave Molyneux and Ian Bell all have their turn holding the record, the last named posting the first sub-two minute lap on the new layout.

However, it’s Nick Crowe and Mark Cox who now hold the outright lap record for the chairs with their lap of 1m53.495s from 2008 still standing. The closest anyone has ever come to this came in September 2015 when Tim Reeves/Patrick Farrance became the first crew to get to within one second of Crowe’s stunning lap.

As well as Reeves/Farrance, the biggest improvers of late have been Steve and Matty Ramsden with the Yorkshire duo becoming just the fourth crew to post a sub-1m55s lap. The evergreen Dave Wallis also set a new personal best lap in 2016 to move up to seventh fastest of all time whilst Lee Crawford/Scott Hardie moved into the top ten in 2017… 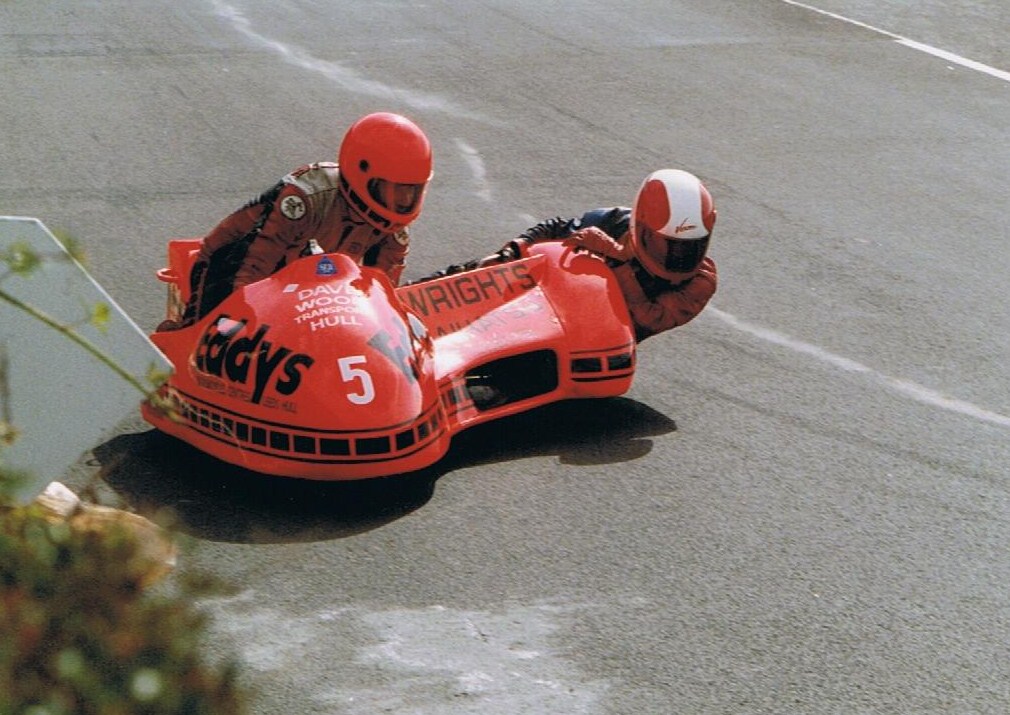 "Very easy and quick process. Thanks"