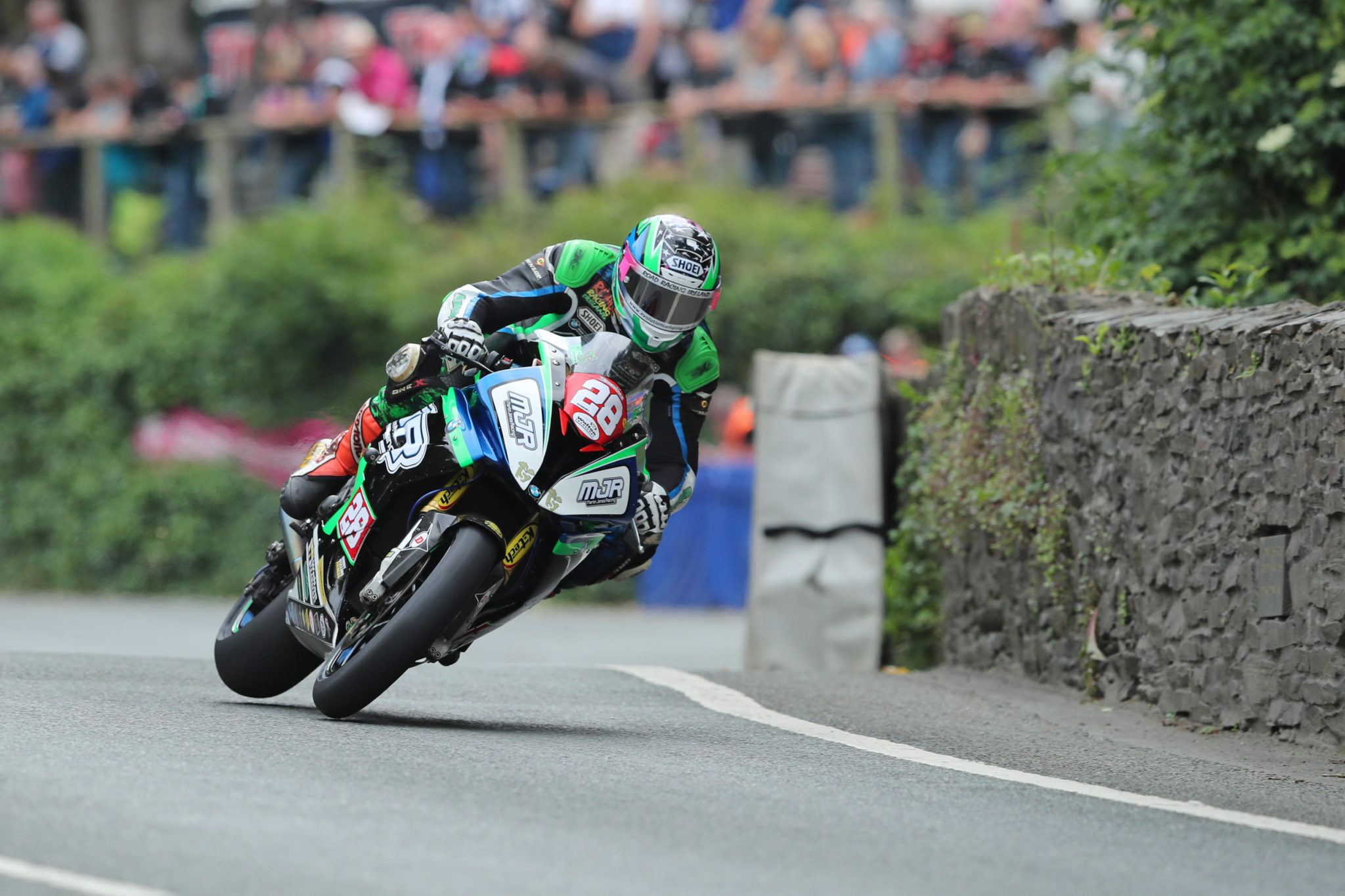 Growing up in Skerries, Ireland with the Skerries 100 just down the road was a huge factor in Michael taking up motorcycle racing. He has been brought up with racing, watching the Skerries 100 as a kid, to eventually taking to the course on two wheels in 2007.

As well as this famous road race, racing legend Martin Finnegan lived locally to Sweeney with the pair becoming good friends. Michael has said that Martin was a great influence and hero who helped him on his way to becoming a successful road racer.

Michael first appeared at the Isle of Man in 2009, when he contested the Manx Grand Prix, finishing in an impressive 10th place. Sweeney returned to the MGP in 2010 competing in the Junior race, where he took his first win ahead of the likes of Ivan Lintin and 76 others who finished the race.

Michael followed this up with two top 5 finishes at the 2011 Manx GP, coming 4th in the Senior and 5th in the Supertwin whilst unfortunately recording a DNF in the Junior race.

As previously mentioned, winning the 2010 Junior Manx GP is up there with Michael’s career highlights which came very early in his Isle of Man racing career. The 2012 Manx Grand Prix saw him return to the podium, this time as runner-up in the Supertwin race riding a 650 Kawasaki. This was also the year Sweeney achieved 7th and 12th places in the Junior and Senior Manx GP races respectively.

2013 was one of Michael’s best road racing seasons to date, winning his second Junior Manx Grand Prix riding a 2009 Yamaha R6 with an average race speed of 117.07mph seehim him get the victory ahead of Michael Russell. As well as this race win, Sweeney came runner-up in the Supertwin race for the second consecutive year –  with Russell beating Sweeney by less than a second.

Following this successful year Michael took to the Isle of Man TT in 2014, competing in six races. His debut TT season saw his highest finish come in the Lightweight TT, taking 14th riding a 2011 Kawasaki ER6. Another outstanding performance saw him finish 18th, this time in the Senior race where he lapped in excess of 124mph. Sweeney also came 27th in the Superbike, 28th in the Superstock and 31st and 32nd in the Supersport 1 and 2 races which capped a successful debut TT season for the Irishman. Indeed, he won six bronze replicas from his six races.

Since then, Michael has been a regular figure at the TT, despite a nasty crash in the 2015 Supersport 2 race. He returned in 2016 with his fastest average race speed coming in the 2017 Senior race at 123.211mph, where he placed 22nd in the race won by Michael Dunlop. This was also the race where he recorded his personal best lap to date, an impressive 126.407mph. In the same year Sweeney achieved a very impressive 9th place in the Lightweight TT, his third highest TT finish thus far after taking sixth in the 2015 TT Zero race.

As well as competing at the Isle of Man TT, Michael is also a regular at the North West 200 and Ulster Grand Prix where his best results have again come in the Lightweight class although he has also been a regular top 15 finisher in both the Supersport and 1000cc classes.

Sweeney’s season began in style with a podium finish in the Open ‘A’ race at Cookstown 100, finishing third, just ahead of Derek McGee. Michael followed this up with an impressive 5th in the Supersport Invitation race, this time pipping Paul Jordan to the post.

Fourth in the Around A Pound Tandragee 100 feature race continued Sweeney’s great start to the year and with only two seconds covering the front four, he was unlucky not to find himself on the podium.

Onto the TT and 7th in the Lightweight TT race on the 2018 Kawasaki 650 was Sweeney’s best result on the Mountain Course, with a highly credible 12th in the feature Senior TT following this up nicely. A very consistent showing from the Irishman also saw him finish 18th in both Supersport TT races, as well as 20th in the Superstock encounter. The results saw him again lap at more than 126mph and end the week with three silver and two bronze replicas.

Michael was very much in the thick of the action at the 2018 Skerries 100 Road Races, with thrilling battles between the local racer and Paul Jordan in both the Open Race and Supersport races. On both occasions Sweeney came out on top, beating Jordan over the line by 0.764 seconds and 0.192 seconds in the Open and Supersport races respectively. Michael had to settle for 2nd place in the Supertwin race, however, with Andy Farrell crossing the line just 0.124 seconds ahead.

Impressive performances followed at the Southern 100, where he was making his debut, with ninth in the feature Championship race and ninth and 12th in the two Senior races. He also took a brace of 12th’s in the two Supersport races and ended the week with a fastest lap of 108.631mph.

He then found himself on the podium once more at the Faugheen and Armoy road races and took his fine form to the Ulster Grand Prix, where he managed 4th and 5th place in the opening Super Twin and second Supersport races respectively.

The final domestic race of the season, the East Coast Racing Festival, was another highlight of 2018 for Michael as wins in the Super Twin and Supersport Race 2 encounters, led to him taking the ‘Man of the Meeting’ Award to end the year in second place overall in both the Irish Road Race Supersport and Superbike Championships.

His successful 2018 season came to a conclusion at the Macau Grand Prix where he placed a more than creditable 13th.

Two 15th place finishes at the Isle of Man TT 2019 were highlights for Sweeney this campaign, with these coming in the Supersport TT 1 race and the headline Senior TT encounter. Michael also achieved 16th place in the Supersport TT 2 race, 18th in the Superstock TT and 25th in the Superbike thus winning five more bronze replicas. The only disappointment on the island came when he was forced to retire from the Lightweight race.

The poor weather at the North West 200 meant he only had one race finish but it was a more than impressive one as he took ninth place in the opening Supersport race whilst he also impressed again at the Southern 100 with a succession of top class finishes. The highlights were three podiums finishes – second in the second Supertwin race and third in two of the Supersport races. He took sixth in the other Supersport race whilst the 1000cc races saw him well to the fore in each.

Seventh and eighth were taken in the two Senior races before he finished a fine sixth in the Solo Championship where he also recorded his first 110mph+ laps of the 4.25-mile course with an eventual new personal best of 110.760mph.

His strong performances at the International road races continued at the Ulster Grand Prix where he finished all seven of his races inside the top ten. The Superbike races saw him take 7th and 9th with the Superstock encounter also seeing him claim 7th. The three Supersport races were equally profitable with a 6th and two 7th places finishes whilst he also placed 7th in his solitary Supertwin outing. To add to his joy, he lapped the Dundrod circuit at more than 130mph for the first time with a new PB of 130.650mph.

To confirm 2019 as his best road racing season to date, Michael won both the Supersport and Supertwin Irish Road Racing Championships with four victories in the latter (Skerries, Faugheen, Munster and Killalane). He was also victorious on the 600cc Yamaha at Munster with two wins at Killalane helping him finish 2nd overall in the Superbike Championship.