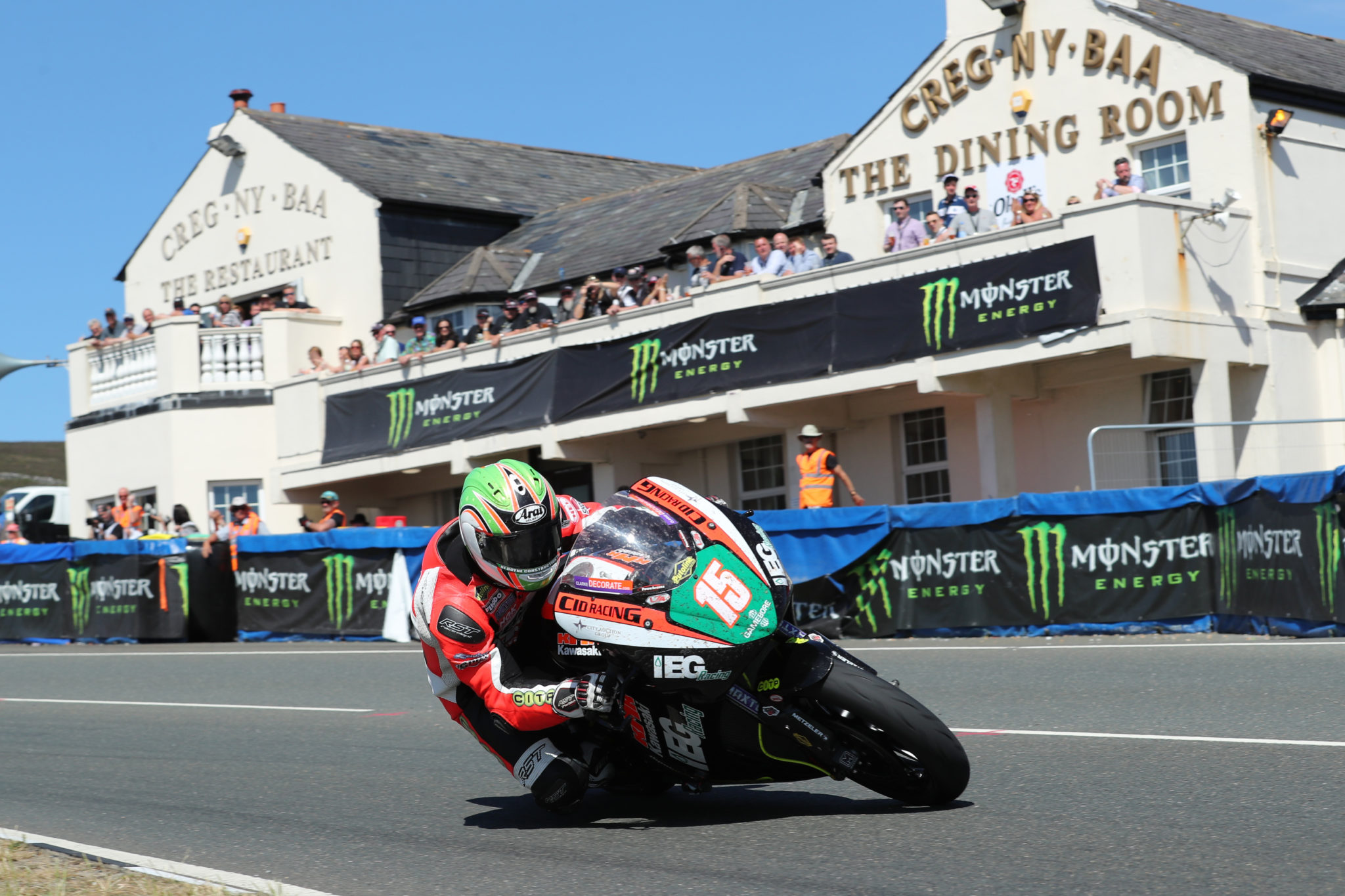 McGee caught the racing bug thanks to his father, who took him to see the Ulster GP when Derek was a child.

The Irish rider did not start racing until a while after this though and it was 2011 when he made his breakthrough, winning the Irish Support Road Race Championship. It’s been an upward progression ever since and he’s now regarded as one of Ireland’s top road racers.

It was 2015 when he made his debut at the Isle of Man TT Races and the “Mullingar Missile” was the Irish Supersport Road Race Champion at this point so it was exciting to see how he would fare against racers at the TT.

Riding for the Wilson Craig Racing team, Derek recorded a DNF in the Senior, but placed 29th and 27th in the Superbike and Superstock TT respectively, 20th and 19th in the Supersport 1 and 2 races and a very impressive 11th in the Lightweight TT. He also lapped at close to 123mph and won the coveted TT Newcomers Trophy for 2015. McGee followed this up by winning the Super Twins race at the 2015 Ulster Grand Prix, his maiden International road race victory.

After such an impressive TT debut in 2015, the following year was a rather disappointing one at the Isle of Man. McGee only finished two races, recording DNF’s in the Superstock, Supersport 2 and Senior TT. In the races he did manage to cross the line, Derek finished 26th in the Superbike TT riding a 2016 BMW S1000RR and 17th in the Supersport TT 1 on a 2016 Yamaha R6 whilst he also improved his personal best lap to 125.001mph.

McGee did have a very impressive Faugheen 50, where he was able to win the Grand Final on the Noel Williamson Racing BMW S1000RR. As well as this, he achieved victory in the Supersport race at Walderstown and came in 5that the Ulster Grand Prix in the Super Twins race.

Although not featuring in the 2017 Isle of Man TT due to financial constraints, McGee had a very successful year at the Irish National road races winning the Irish Superbike, Supersport and Supertwin Championships and he was also crowned the ‘Leading Newcomer’ at the 2017 Southern 100 after a series of impressive results, which included seventh in the feature Solo Championship race and a quickest lap of 111.312mph. This currently makes Derek the second fastest newcomer ever to have lapped the 4.25-mile Billown circuit.

On the back of this success, McGee signed for road racing legend Ryan Farquhar’s KMR Kawasaki race team to contest the Supertwins class in 2018 and he achieved his best TT result yet by taking a brilliant 2nd place in the Lightweight TT, finishing only behind Michael Dunlop. Riding a 2017 Kawasaki ER650, McGee established himself as a contender for this race in future years as he lapped at 121.698mph, which, at the time, was the second fastest lap ever in the class.

Derek also placed 11th in Supersport TT 1 and 15th in the Superbike TT but unfortunately recorded DNF’s in the Supersport 2 and Senior races although he was well placed on the leaderboard in each before he had to retire.  Despite his two-year absence, he also improved his lap speeds once more with a best lap of 127.817mph making him the second fastest rider ever from Southern Ireland to have lapped the Mountain Course.  The results saw him add two more silver and one bronze replica to his ever-increasing collection.

2018 was also a highly successful season at the Irish National road races where Derek was the best rider of the season with multiple wins at Enniskillen, Faugheen and Walderstown. Unfortunately, his season ended early after a crash at the Ulster Grand Prix, where he got caught up in another rider’s accident, left him with numerous injuries although he made a quick recovery. He’d already done enough to be crowned Irish Superbike, Supersport and Supertwin Champion once more.

At the North West 200 McGee came runner up in the Supersport race behind Davey Todd. Derek was riding a B&W/Diamond Edge Cutting Kawasaki and fought for the win throughout the six-lap race, finishing just 0.340s behind Todd at the chequered flag and a similar margin ahead of Todd’s Milenco by Padgetts Honda team-mate Conor Cummins.

McGee also won the Grand Final races at both Cookstown and Tandragee in 2019 but, after retiring from the Superbike race, his Isle of Man TT campaign came to an abrupt end when he crashed at Greeba Bridge in the following practice session.

This saw him sustain leg injuries which ruled him out for little over a month. He made his return at Walderstown, where he placed third in the open race. Derek followed this up with a win in the Supersport 125/Moto3 race at Faugheen, as well as winning the Supersport meeting at Armoy.