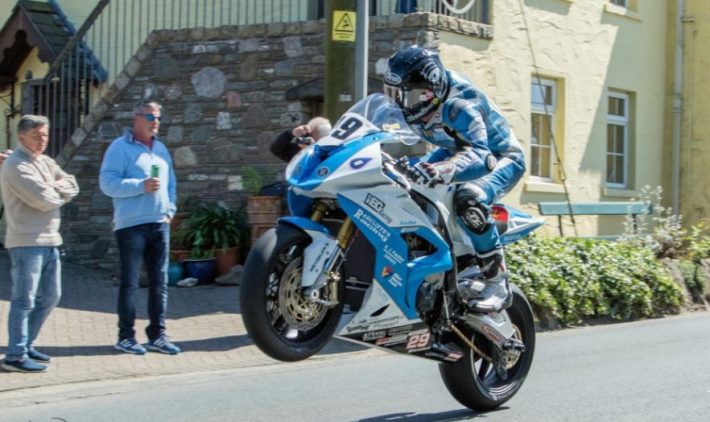 We asked Jamie how he got into biking, to which he responded, “I’ve been around racing all my life for as long as I can remember. My dad Paul Coward raced in Ireland, the Isle of Man and all the major road races, so racing was in my blood I suppose. My first race was at Anglesey with the Wirral 100.”

Jamie’s father Paul’s highest finish in the Isle of Man TT is 26th, which came in the TT2013 Sure Sidecar 2 in which Paul was alongside Stephen Ramsden. The Manx GP is where Paul had most success, finishing 2nd three times, and 3rd once between 2008-10.

Jamie made his mountain course debut in 2010, finishing 4th in the Newcomers A race at the Manx Grand Prix. 2011 saw Jamie finish 4th again, however this time in the feature Junior Manx GP race. In 2013, Jamie moved up to the Isle of Man TT races taking two top twenty finishes in the two Supersport races, the best of which was 16th in the second four-lap races. He won three bronze replicas that year, setting a fastest lap of 122.072mph.

“My first race bike was a 350 Honda k4. I couldn’t afford to buy a bike so dad had enough spares to build me a bike and off I went.”

When asked what he believed to be his greatest achievement to date, Jamie responded, “all of my racing so far has been an achievement. If I was told at the beginning of my career I would be in the position I’m in, with a great team and bikes to ride I would have laughed. But I have to say 2017’s Classic TT on the 500 Manx Norton on my own for 4 laps, and to be the only person to do 110 mph on a single cylinder machine around the mountain course has to be my biggest achievement.” Jamie finished the 2017 Classic TT race in second place, behind Josh Brookes.

2017 as a whole can be seen as the rising star’s best year, with ninth and 11th place finishes taken in the Superstock and Senior TT races respectively, recording a new personal best lap in the latter at 128.059mph.

Finishing above Michael Dunlop is an achievement in itself and Jamie achieved this in the 2017 Ulster GP Superstock race, when he finished in sixth place, one spot ahead of Dunlop. He also took sixth and ninth in the two Supersport races and seventh and eighth in the Superbike races at the Dundrod meeting.

Coward also achieved a string of top six finishes at the Southern 100, becoming the fifth fastest rider ever around the Billown course, and at Oliver’s Mount, Scarborough. Meanwhile, the North West 200 saw him take two top ten finishes in the Supersport class.

The highlight of Coward’s 2018 Isle of Man TT was a superb 8th place in the Senior race riding a 2015 BMW S1000RR for the Penz13.com team, over 30 seconds ahead of 9th place Davey Todd. 12th place in the Superbike TT was the other race which Jamie finished, in what proved to be a frustrating week as he was forced to retire from the Superstock race and both Supersport races but he did set a new personal best lap in the Senior with a speed of 128.877mph.

The Classic TT proved to be a much more successful affair for Coward, where he was runner-up in both the Senior race, riding the 1970 Norton Manx, and the Junior on the 1980 Honda Craven K4. Fifth place in the Superbike encounter, which was won by Dean Harrison, capped a successful week for Jamie.

He also contested the International Road Racing Championship for the first time where, riding for the Penz13.com BMW team he finished sixth overall with seven top ten finishes the highlights of which were fifth at Hengelo, Terlicko, Imatra and Horice.

Jamie joined the newly formed Prez Racing in 2019, riding Yamaha machinery in the Superbike, Supersport and Superstock classes, whilst KTS Racing supplied him with a Kawasaki for the Lightweight races. It would prove to be his best year in racing to date.

The 2019 Isle of Man TT showed a flurry of consistent performances from Coward, placing no lower than 9th in all of the races he competed. The 9th place finish came in the Superstock race riding a Yamaha at an average speed of 126.448mph. The highlight of Jamie’s TT though was the Lightweight race in which he made the podium as runner-up behind Michael Dunlop, finishing just 1.3s adrift at the chequered flag.

A 5th place finish in the Supersport TT 2 race was another highlight for Coward in 2019, with a hat-trick of 8th place finishes in the Superbike TT, Supersport TT 1 and Senior TT races. The Senior result was particularly impressive as he lapped at 130.317mph to become the fastest Yamaha rider ever to have lapped the Mountain Course. The results saw him win the 2019 TT Privateer’s Trophy.

The preceding North West 200 saw some equally strong results, opening his account with fifth in the first Supersport race. A seventh place followed in the Superstock race and the first day of racing concluded with Jamie taking his first podium at the meeting when he took a close second place to Stefano Bonetti in the Lightweight race. Saturday’s wet weather saw him opt out of the races.

Onto the Southern 100 and although he crashed out of the lead of the opening Supertwin race, he bounced back to end the week with no less than five podium finishes, three of which were second place finishes behind Dean Harrison in the three Supersport races.

The Ulster Grand Prix was an equally profitable meeting for Jamie as he took third and fourth on the KTS Kawasaki in the two Supertwin races whilst he finished inside the top eight in all of his races on board the Prez racing Yamaha’s. Fourth and a brace of 5th’s was the outcome in the three Supersport races whilst he also took 5th and 8th in two of the Superbike races.

Jamie’s season ended at the Classic TT and after five previous podiums, he finally got to stand on the top step after taking an emotional win in the Ted Woof/Craven Honda in the Junior Classic TT race. He also took third on the Craven Manx Norton in the Senior Classic TT race and was on course for a top five finish in the Superbike Classic race before unfortunately being forced to retire.

Jamie’s aspirations for the future is to simply “win a TT”, and for a man who has many podiums to his name, including a second placed finish, this is certainly manageable. He has many races ahead of him at such a young age, so with experience and time, we’re sure we will be seeing Coward at the top of the TT podium soon. As well as this, after an impressive ride at the Ulster GP in 2017 and finishing 6th, a podium finish in the future will sure be a target for the man from Halifax.