Despite being seen as an amateur road race event, the Manx Grand Prix has seen speeds not too far adrift of those recorded at the Isle of Man TT although, naturally, the milestones have tended to happen a few years after those set at their big brother’s event.

The first meeting in 1923 saw Bob Lowe set the fastest lap of the race with a speed of 55.79mph, which, at the time, was only 4mph mph adrift of the TT lap record. However, although it was 1957 when Bob McIntyre set the first ever 100mph lap in 1957 it was some 16 years later in 1973 when the figure was reached for the first time at the Manx GP.

It was certainly a famous name though as the late Phil Haslam, elder brother of future TT winner Ron, ensured his name went into the record books forever with an opening lap in the Junior race of 102.18mph. He went on to win the race and eventually set a new outright lap record of 103.15mph.

Three years later and the difference between the Manx and TT could be seen even further as John Williams increased the outright lap record at the latter to 112.27mph. However, the Manx had to wait another ten years before this landmark to be achieved at the September event.

A superb dice in the 1986 Senior race between Grant Goodings and Mike Seward saw them break the existing lap record and although it was Goodings who won the race by 3.6s, Seward had the consolation of becoming the first rider at the Manx GP to lap at more than 110mph, his new lap record being 110.75mph.

1989 saw Steve Hislop put the TT lap record over the 120mph mark for the first time, although the year before had seen local rider Phil Hogg put the Manx lap record up to 114.02mph. At the time speeds at the Manx weren’t too far behind those set at the TT, hovering around 5-6mph slower, but it was 2004 before the first 120mph lap was achieved at the Manx.

It was local ace Tommy Clucas who had the honour as he lapped at 120.28mph and 120.25mph on the first two laps of the Junior race. At the time the Supersport lap record at the TT was just shy of 123mph which shows how talented Clucas was and his lap times would have seen him finish in the top ten in the corresponding TT races. The race was hit by tragedy though as mechanical problems caused the Manxman to crash at Ballaugh Bridge on the final lap and he later succumbed to his injuries.

As a lasting tribute to the Peel rider, ‘The Tommy Club’ was formed whereby all riders who lapped at more than 120mph at the Manx became a permanent member of the club receiving a medal for their achievements. It remains an illustrious club though as only ten riders, including Clucas, have broken the 120mph barrier.

Clucas’ record only lasted a year when it was beaten by no less than three riders in the Senior race – Seamus Greene, Ian Pattinson and Alan Jackson jnr. All were 750cc mounted, compared to the 600cc Honda that Clucas rode, and although he didn’t win the race, Jackson claimed the lap record with a speed of 122.208mph.

This remained in the record books for ten years until it was finally beaten in 2015 by the late Malachi Mitchell-Thomas. Riding a 600cc Kawasaki, the former Supermoto rider lapped at 122.221mph on his way to winning the Senior and looked set for a strong TT career before sadly losing his life at the 2016 North West 200.

Two years later and the lap record returned to the island as Michael Evans lapped at 122.866mph in the Senior race as he took a Senior-Junior double whilst Nathan Harrison repeated the feat two years later, his lap of 122.094mph making him the fifth fastest rider ever at the Manx GP.

Three riders broke the 120mph barrier for the first time in 2018 with a further seven achieving the feat in 2019 with 26 now having achieved the milestone since 2014.

With riders’ careers at the Manx Grand Prix tending to be less than those at the TT, due to the various rules in place, it’s not unsurprising to see the multiple winners  list packed with those riders who have been successful in the Classic races.

Leading the way with 11 wins is Midlands rider Bob Heath who, as well as taking podium finishes at the TT, was victorious in 11 Classic races between 1990 and 1999, seven of these coming in the Senior class and four in the Junior. He enjoyed countless battles with Bill Swallow during this decade and the Huddersfield rider is only two wins behind on nine although his total spanned a greater period, his first win coming in 1986 and his last in 2003 although he’s still competing at the Classic TT today!

Sandwiched between this pair on ten wins are Ryan Farquhar and Roy Richardson, the Northern Irishman winning the Senior Newcomers race in 1999 and the Senior itself a year later. Of course, Farquhar went on to become a multiple race winner at the TT but once he started competing in the Classic races at the Manx, more success came his way particularly on Roger Winfield’s 500cc Paton.

Richardson, meanwhile, won the 1997 Senior Manx Grand Prix before moving on to the TT but he returned year on year to the Manx and took nine more wins in the Classic races with victories coming in the 250cc, 350cc and Post Classic classes.

Next up on five wins is Denis Parkinson, the first rider on the list not to have competed in the modern era. His wins were taken between 1936 and 1953 before race winners had to move on to the TT and he’s joined on that total by the late Richard Swallow – who won five successive Junior Classic races between 1987 and 1991 – and Bob Jackson. The Cumbrian failed to win in the modern classes at the Manx, moving on to the TT in 1981, but returned to the Classic races in the 1990s where he was immediately on the top step of the podium, eventually taking five Lightweight Classic wins.

Austin Munks, like Parkinson, took wins both before and after the Second World War, his fourth and final win in 1947 being the first at the Manx by a foreign machine. Three other riders have taken four wins these being Alan ‘Bud’ Jackson, brother of Bob and whose first win came in the 1986 Junior, Chris McGahan and Ewan Hamilton.

Nine riders are tied on three wins including Jason Griffiths, James Courtney, Ricky Mitchell and Dan Kneen, the last named the only rider in the history of the event to have won three races in a week. Michael Evans joined them on three wins after winning the Newcomers race in 2016 and then the Senior-Junior double a year later.

Places to Eat and Drink 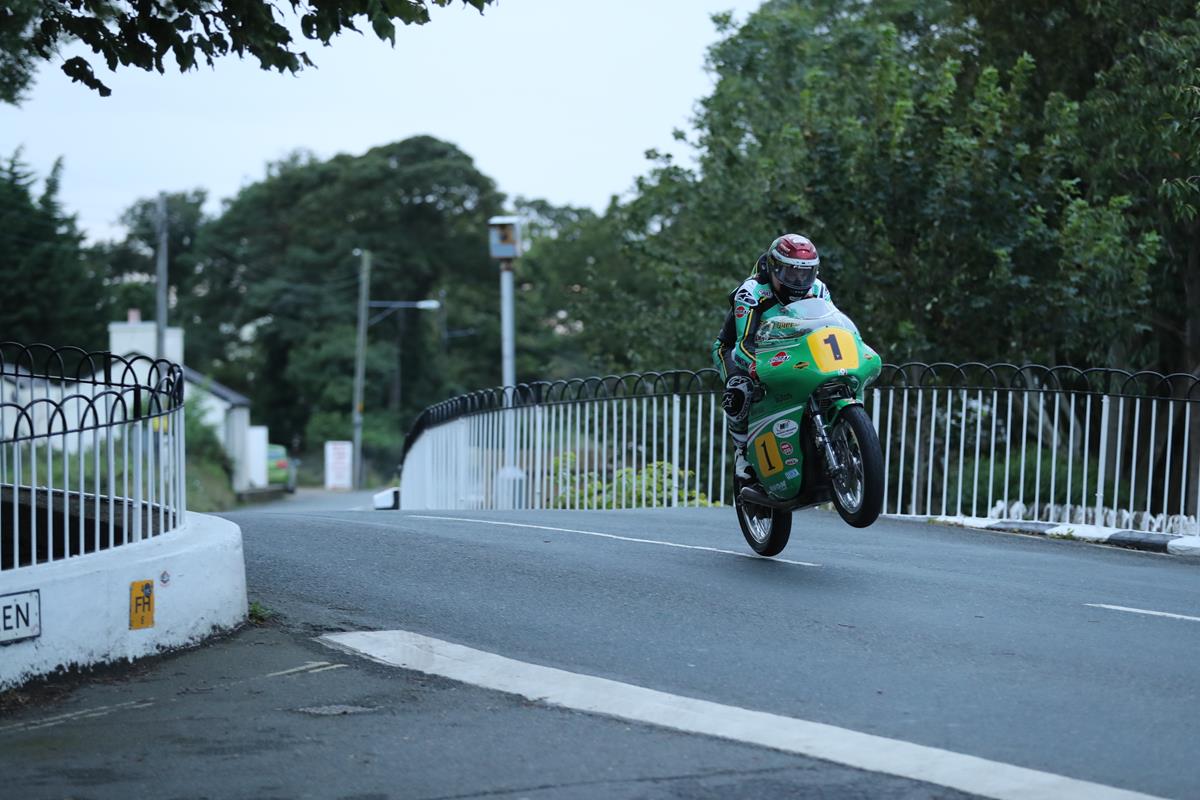 Once again, the leading podium finishers at the Manx Grand Prix are dominated by riders who have been successful in the Classic races, the leading rider on this occasion being Bill Swallow whose 19 podiums were taken between 1986 and 2003. He’s just ahead of regular sparring partner Bob Heath whose career may not have lasted as long as Swallow’s but was equally as successful.

The late John Goodall is tied with Heath on 15 podiums, the first of which came in the 1973 Junior/Senior whilst he also went into the record books as the first ever winner of the 500cc Classic race in 1983. He was still taking podiums in the 2000s before sadly losing his life in 2008.

He’s just ahead of Roy Richardson whose first podium came in the 1995 Senior race. He won the Junior in 1997 but continued in the Classic races and would probably still be doing so today had he not broken both legs in a practice accident at Ballagarey in 2015.

The other three riders in double figures are Bob Jackson, whose initial success at the Manx came on the 250cc and 350cc machines in the late 1970s before moving up to the TT, Ryan Farquhar and Alan ‘Bud’ Jackson.

Meanwhile, the only two riders on the list not have scored at least one of their podiums in the Classic races are Mick Robinson and Keith Townsend, both of whom recorded eight rostrum finishes. Robinson was a 250cc and 350cc expert during the 1980s and 1990s and can consider himself unlucky never to have won a race whilst Townsend’s forte was in the 600cc and 750cc classes. His crowning glory came in 2000 when he won the Junior race.

Now you know the Manx GP stats, let’s take a look at the Classic TT…

"Very helpful and charming considering the person I was speaking..."