The Classic TT may have only got underway in 2013 but those six years have seen numerous race winners crowned across the classes which have included the Senior (500cc), Junior (350cc), Lightweight (250cc), Superbike, Formula One and Formula Two.

Eight riders have currently taken more than one race victory with three of them topping the win table with four wins each, the first of whom who achieved that tally being Michael Dunlop, his victories coming in the 2013 F1, 2015 Superbike and 2016 Superbike and Junior races.

His Junior win came riding a 350cc MV Agusta although the ride was originally earmarked for 2014 Junior race winner and lap record holder Lee Johnston. But when he got injured at the Ulster Grand Prix, Dunlop stepped in and got the better of Michael Rutter after a race long duel.

It’s the F1 and Superbike races where he’s been more prevalent though when riding for Steve Wheatman’s Classic Suzuki team, his F1 and Superbike wins taken on the 1100cc XR69 replica where he’s lapped at close to 127mph. He almost took win number five in 2019 only to retire at Hillberry on the final lap.

He was joined on four wins after the 2018 event when Dean Harrison won the Superbike Classic race for the second successive year. An ever-present at the event, the two wins came after the Bradford rider had already taken victory in the 2013 Formula Classic and 2015 Senior Classic races.

Bruce Anstey became the third rider to take four wins when he took an emotional victory in the 2019 Lightweight race, two years after his last race on the Mountain Course when he became the first rider to lap the 37 and ¾-mile circuit at more than 120mph on a 250cc machine after a scintillating lap of 120.475mph.

That followed on from his successes in the same race in 2016 and the Formula One race in 2014.

He’s finished second in the latter twice as well, continuing to set records, his lap record of 127.496mph on the Padgetts YZR500 Yamaha in the 2017 race the fastest ever lap around the Mountain Course for a two-stroke machine.

John McGuinness moved onto three wins in 2019 after taking his third Senior Classic race win in four years and he continues to hold the lap record in the class on the all-conquering Winfield Paton.

Four riders have taken two wins, Chris Palmer taking a brace in 2013 (Junior Classic and Formula Two) and Ian Lougher doing similar in 2014, this time in the Senior and Formula Two races. Michael Rutter joined them on two wins in 2017 when he won the Junior Classic for a second time, having previously won it in 2015 with Lee Johnston doing likewise after adding the 2018 Lightweight race to victory in the 2015 Junior Classic race.

When it comes to podiums at the Classic TT, two riders lead the way on seven podiums, the first of them being Bruce Anstey with the Kiwi having first stood on the podium in 2014, taking third place in the Senior on Ken McIntosh’s Manx Norton.

Two days later he grabbed his first win with victory in the F1 race and a year later he took second place in the same race with his fourth podium coming in the 2016 Lightweight race which he led from start to finish. 2017 saw him add two more rostrums to his collection with another win in the Lightweight race and second in the Superbike.

Podium number seven came with victory in the 2019 Lightweight race, two years after being on the side lines due to serious illness and he was joined on seven podiums this year by Jamie Coward who took two more rostrum finishes including a maiden win.

His first podium came in the 2013 Senior when he finished third and he went one better in the same race of 2017, when he set the fastest ever lap of the Mountain Course by a British single cylinder machine. He took another third in the 2017 Junior whilst 2018 saw him finish second once more in both the Senior and Junior races.

However, 2019 saw him claim a much deserved first win when he took the honours in the Junior race and this followed on from his third place finish in the Senior race two days before.

They both moved ahead of six-time podium finishers Ian Lougher and Lee Johnston, the former taking a brace of wins in 2014, the Senior and Formula Two, before taking another second place in the 2015 Senior race where he was again riding a 500cc Paton. His fourth podium came in 2016 when he took second place behind Anstey in the Lightweight race and he repeated this result in 2017 for podium number five. Last year saw him finish third in the same race to make it six podiums in total. 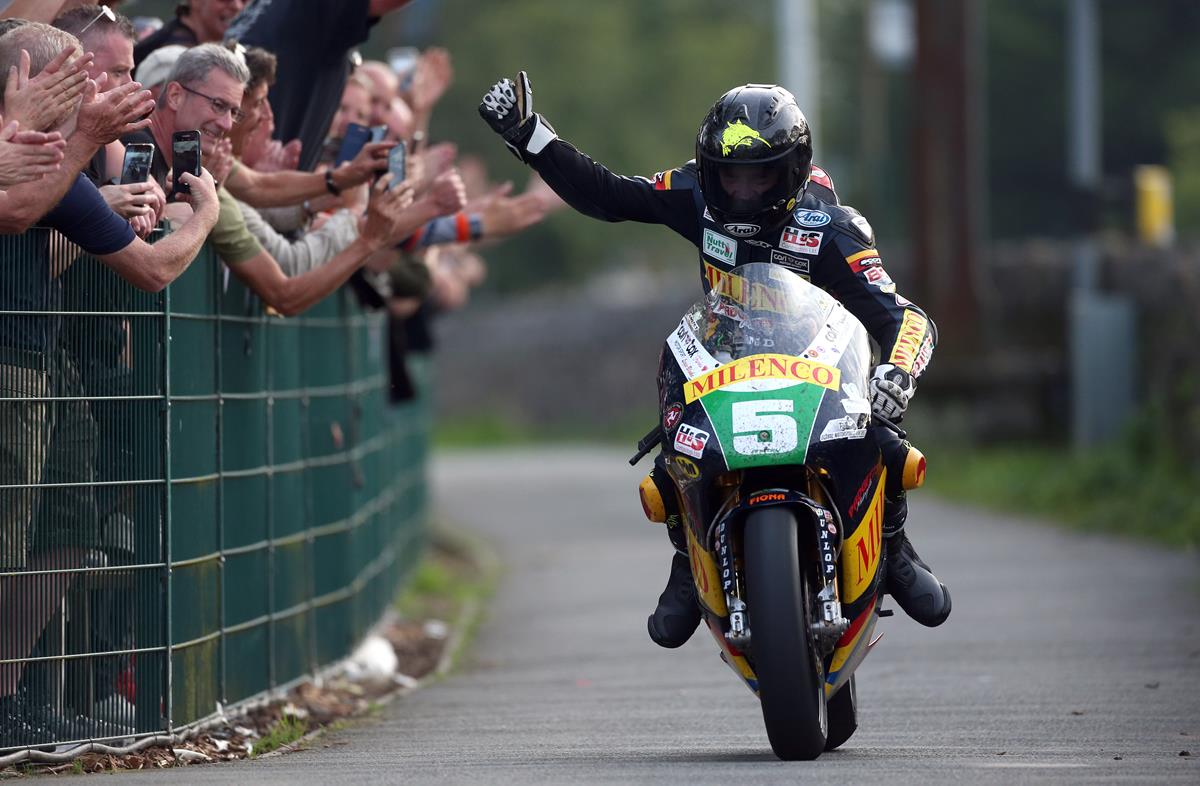 Johnston, meanwhile, took no less than three podiums in 2018 with victory coming in the Lightweight race on the Padgetts Honda usually campaigned by Anstey and a brace of thirds on the Davies Motorsport Honda’s in the Junior and Senior races. Victory had already come in the 2014 Junior race before he followed this up with third in the 2015 Senior and second in the 2017 Junior, all three being taken on MV Agusta machinery.

Michael Rutter also has five podiums to his name, all of them coming since 2015. He’s taken two victories in the Junior class, in 2015 and 2017, with a second place in 2016 whilst second was also the end result in the 2016 Superbike race and the 2019 Junior encounter. He also ‘finished’ on the podium in the 2017 Lightweight race but was later disqualified from second place due to an oversized fuel tank.

Next up on four podiums is Michael Dunlop with all four of those being race wins, three on an 1100cc XR69 Suzuki and one on a 350cc MV Agusta. Brother William follows on three podiums, taking a brace in the Senior class, in 2013 and 2017, and another in the 2016 Superbike race.

William’s tally of three podiums was matched by John McGuinness in 2019 with the Morecambe Missile’s rostrum finishes, like Michael Dunlop, all being race wins with victory in the 2016, 2018 and 2019 Senior Classic races

Meanwhile, no less than nine riders have taken two podiums thus far with Chris Palmer taking two wins in the inaugural 2013 event before retiring from racing. Dan Cooper took second in the 2013 Junior and 2014 Senior races with the late James Cowton’s runner up positions both coming on a 250cc Yamaha.

Ryan Kneen took a good third in the 2013 F1 race on an OW01 Yamaha before showing his versatility with victory in the 2015 F2 race where he just got the better of Cowton with Phil McGurk also being on the podium in those two years with a second and third to his name in the Formula Two and Junior races.

Like McGurk, the other double podium finishers have yet to take a win, Alan Oversby claiming second and third in the 2014 and 2016 Junior races respectively and Conor Cummins taking second in the 2013 Superbike Classic race and third in 2018.

James Hillier and Dominic Herbertson joined them on two podiums after each took a third place finish at the 2019 event, Hillier in the Superbike race on an 888 Ducati and Herbertson in the Junior race on the Davies Motorsport Honda he’d won on the previous year. Hillier’s other podium came in 2014 when he finished second behind Anstey in the Superbike race.

Despite the event only having been running for seven years, an additional twenty eight riders have taken a single podium apiece which is perhaps an indication of the fickle nature of the older machines and how just finishing is an achievement!

"THE PERSON I SPOKE TO WAS VERY PLESANT AND HELPFULL..."