The North West 200 course has changed on numerous occasions over the years and it was the course in the late 1970s that saw the fastest ever speeds with Tom Herron setting a never-to-be-beaten outright lap record of 127.63mph in 1978 – one can only wonder what the lap record would be today if that course was still being used!

Since then though, four chicanes have been introduced – Juniper Hill (1983), Start and Finish (1988), Magherabuoy (1996) and Mather’s Cross (2010) – with them all designed to slow speeds down just when they’re beginning to escalate once more.

Weather conditions since 2010 have also been inclement, more often than not, but 2016 finally saw perfect weather conditions so, unsurprisingly, the outright lap record was broken. Whilst the Superstock race saw a number of riders set their personal best laps, quicker than what they did in the Superbike race, it was the latter where the outright lap record was set with Michael Dunlop’s dominant victory seeing him lap at 123.207mph, half a second inside Josh Brookes’ old mark.

Despite superb weather in 2018, neither the Superbike nor Superstock lap records but after two years of various movements within the fastest 25 riders, records were finally broken in 2022 when racing resumed after two tears being missed due to the Covid-19 pandemic.

Dunlop’s outright lap record was convincingly broken by no less than five riders with Peter Hickman claiming the record with a stunning lap of 124.799mph in the opening Superbike race. That means he now holds the unique record of being the current outright lap record holder at the NW200, Isle of Man TT and Ulster Grand Prix.

With good weather in 2022, lap records were broken in every class, a sign of motorcycle development in the hiatus with eight of the fastest 25 times coming in the year. Richard Cooper went from the fastest newcomer in 2019, with a speed of 120.659mph and 24th fastest on the charts, to the third fastest rider of all time. Davey Todd was another big moving going from 19th quickest to fourth.

28 riders have now lapped the course at more than 120mph.

Despite missing the prime years of his career due to injury, and confined to just the 125cc class when he did return, Robert Dunlop held the record number of wins at the North West 200 for over twenty years, having racked up 14 victories between 1986 and 1994.

In 2015 though, the form man at the NW200 in recent years, Alastair Seeley, equalled that tally of 15 wins with his second hat-trick and in 2016, he finally bettered Dunlop’s long-standing record, claiming his 16th and 17th race wins in the two Supersport races.

To further ram home his status as the most successful rider in the history of the event, he took four wins in 2017 and then three more in 2018 to move onto a staggering total of 24. 2019 saw him fail to win a race for the first time since 2007 but he returned in 2022 with yet another hat-trick extending his record tally of wins to a stunning 27.

Michael Rutter moved into outright third overall in 2017 after winning the second Supertwins race, five years after win number 13 came in the Superstock race, Joey Dunlop having taken 13 wins between 1979 and 1988. Just behind them is Phillip McCallen on 11 wins, largely aided by his five-timer in 1992, with Bruce Anstey one place further back on ten wins, the New Zealander’s last win coming in 2014.

In just ten years of racing at the North West 200, Phillip McCallen recorded an impressive 28 podiums with the Portadown rider competing in all classes during that period. Indeed, his rostrum appearances came in the 250cc, Supersport 400cc, Supersport 600cc, Superbike and Production 1000cc categories.

However, that tally was finally overhauled in 2017 not once but twice with both Alastair Seeley and Michael Rutter moving above McCallen and also beyond 30 podiums. The duo came into the meeting tied on 27 but with five podiums this year compared to Rutter’s four, Seeley just nosed ahead with a total of 32 to 31. 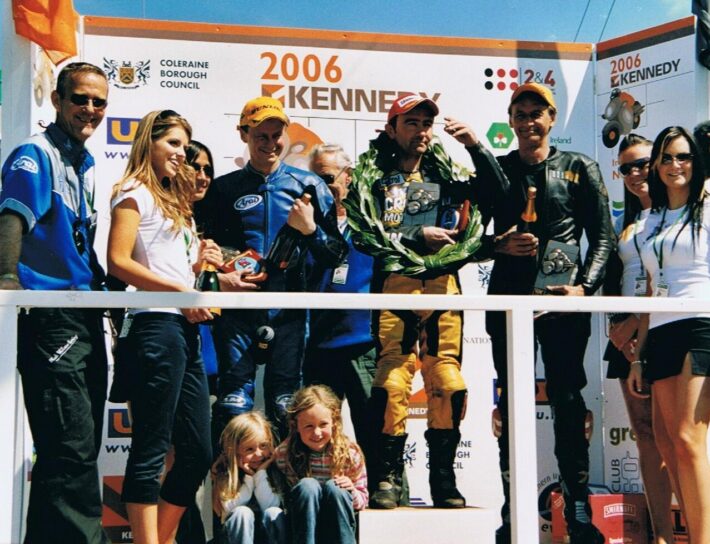 Rutter took another podium in 2018 to move onto 32 whilst Seeley added four more to further increase his record total to a whopping 36. However, the Carrickfergus rider failed to add to that tally in 2019, the first time since 2007 that he hadn’t stood on the rostrum, but Rutter took a brace of thirds in the two Supertwin races to move onto 34, a total that spans an astonishing 24 years, and close to within two of Seeley.

When racing resumed in 2022 after the enforced break due to the Covid-19 pandemic though, it was Seeley who was in the ascendancy once more with three more podiums (all wins) seeing him extend his record tally to 39 and five clear of Rutter.

As expected, both Ian Lougher and Joey Dunlop are high on the list with the longevity of their careers seeing them rack up 26 podiums apiece, whilst Robert Dunlop and Bruce Anstey are one place – and podium – further back. Anstey’s record of appearing on the podium at least once every year since he made his debut in 2002 finally came to an end in 2016.

Special mention should go to ninth placed Tony Rutter who took 21 podiums in a ten-year period when there were sometimes just three races on the programme (250cc, 350cc, 500cc) as opposed to the eight races today. Meanwhile, Lee Johnston moved further up the list after the 2022 meeting, taking four podiums, whilst Woolsey Coulter’s ten podiums all came in the one class, the 250cc.

Riding for Honda Britain, McCallen achieved the feat in 1992 winning the opening 250cc race, both Superbike races and the Supersport 400cc and Supersport 600cc encounters. Only a spill in the second 250cc race prevented him from winning six!

Seeley actually took four wins at the 2017 meeting but these were spread across two days, one win coming on Thursday evening and then three on Saturday.

Honda have won more NW200 races (95) than any other manufacturer with their most recent victories coming in 2022 courtesy of a brace of Superbike wins for Glenn Irwin. They’re followed by Yamaha (84), who chalked up four wins in 2022, Norton (37), Suzuki (31) and Kawasaki (28), the latter taking three wins in 2019 as Glenn Irwin gave them their first Superbike victory in 42 years when Mick Grant won in 1977.

Yamaha have the honour of being the only manufacturer to have a clean sweep of the programme, winning all five races in 1979.

BMW, meanwhile, only took their first win at the North West 200 in 2010 when Keith Amor won the Superstock race. Since then though, they’ve added 13 more wins, all coming in the last six years. Michael Dunlop (Superstock and Superbike) took two wins in 2014 with Lee Johnston and Alastair Seeley also winning Superstock races in 2015.

Seeley also took a Superbike race win in 2015 with Ian Hutchinson (Superstock) and Dunlop (Superbike) adding to the tally in 2016. Another three wins were taken by Seeley in 2017, two in the Superstock class and one in the Superbike category, whilst both he and Peter Hickman were victorious in the 2018 Superstock races. The latter repeated his success in 2019.

Ducati’s win by Glenn Irwin in the feature 2017 Superbike race was their first NW200 victory since 2008 but he promptly gave the Italian manufacturer two more wins in 2018. Another Italian manufacturer, Paton, doubled their total of wins from two to four in 2022 with a brace of victories in the Supertwin class, the wins taken by Joseph Loughlin and Pierre Yves Bian.

These are the current lap and race records that have been set at the North West 200.

Now you know all about the impressive stats of the North West 200, which road race impresses you best – Ulster GP or NW200?