History of the North West 200

For over 80 years, the North West 200 has played a major part in the road racing calendar and a look back through the history books will more than illustrate the importance it’s played throughout the motorcycling spectrum.

Now a fully fledged International meeting of the very highest calibre, the North West, like 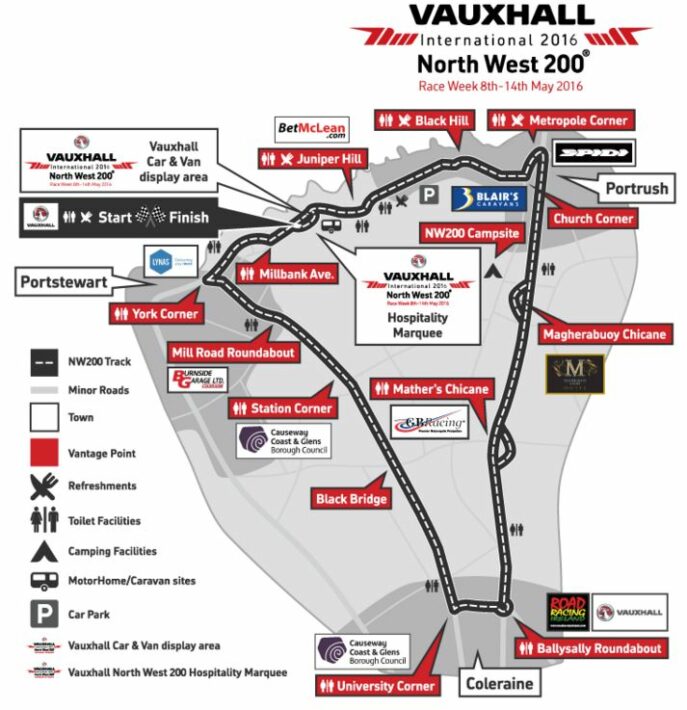 all meetings, had a humble beginning and those original pioneers will have had no idea how the event would grow or how it would produce such a multitude of record breaking feats, so many defining moments, controversy, triumph and tragedy in equal measure, races of the highest order, and launch so many racing careers.

The event, which was initially a 200-mile race over an 11-mile course, has witnessed numerous changes over the years but one thing that’s remained has been its significance not only as a stand-alone meeting but also as a vital fixture for the motorcycling fraternity. Whether you’re a racer, a fan or a promoter, it’s one of the dates you always look forward to and its value cannot be underestimated.

The meeting was originally due to be held on roads close to Maiden City but was eventually held on the roads between Portrush, Portstewart and Coleraine with the original start/finish line located near Magherabouy before moving to Portmore Road in Portstewart in 1930.

That first race, on Saturday 20 April 1929, saw legendary names such as Stanley Woods, Percy ‘Tim’ Hunt and Ernie Nott all in the line-up but it was W J McCracken who was victorious in the handicap race, his race winning time on his 348cc Velocette being an arduous 3hr8m35s.

From the small acorn that was planted back then, a mighty oak has since been formed and we’ve seen everything possible from a road race meeting and as unknown riders have become household names, the racing has seen some of the best anywhere in the world.

Racing has continued ever since 1929 although no races were held between 1940 and 1946 due to the Second World War. Racing resumed in 1947 but no sooner had it done so then the 1948 meeting was scrubbed due to the unavailability of fuel supplies. The organisers increased their efforts to ensure the race was back up and running for its 20th Anniversary in 1949 and it received its largest entry thus far, with an encouraging 113 entries.

Such was the progress of the event though, actually running it was becoming harder and harder and the logistics and financial strain eventually proved too much for the host Northern Ireland Club and the 1963 North West 200 was cancelled. Trade support had disappeared and attracting a quality entry proved difficult so much so that the organisers felt crowds would stay away.

Racing resumed in 1964 and the next issue came in 1972 when the political situation in Northern Ireland was very much on a downward spiral. The Northern Ireland Government considered any large scale public event to be a potential problem and they put pressure on the organisers to the extent that they had little option other than to cancel the meeting.

Some eleven miles in length, it wasn’t until 1973 when the first major changes to the layout of the course took place and these included the exclusion of the Promenade at Portstewart and the moving of the start/finish line to its current location between Juniper Hill and Millbank Avenue. These changes meant the route used Station Road (B185) for the first time and saw the introduction of York Corner.

Even in the 1970s, riders were recording speeds of close to 190mph on the high speed straights although tyre wear was a major issue as the technology of the rubber couldn’t keep up with the speeds of the motorbikes. On more than one occasion, riders had to slow or retire due to strips of rubber being torn out the middle of their slick tyres.

But in 1978, Tom Herron set a new outright lap record of 127.63mph which remains the fastest ever lap seen at the North West 200 due to subsequent circuit changes implemented to slow speeds. Herron had the aforementioned tyre issues and dropped back to sixth but his lap remained the fastest ever seen in the British Isles until Adrian Archibald went quicker at the 2003 Dundrod 150 meeting.

Shell Hill Bridge, an iconic part of the original course was used for the last time in 1979 with a new link road, from University Corner to Ballysally Roundabout, being introduced for 1980. Three years later, a chicane was introduced just before the approach to the Juniper Hill corner and in 1988 a second chicane was added, this time at the start/finish in order to reduce speeds around Primrose Hill as well as allowing safer access to the pitlane. 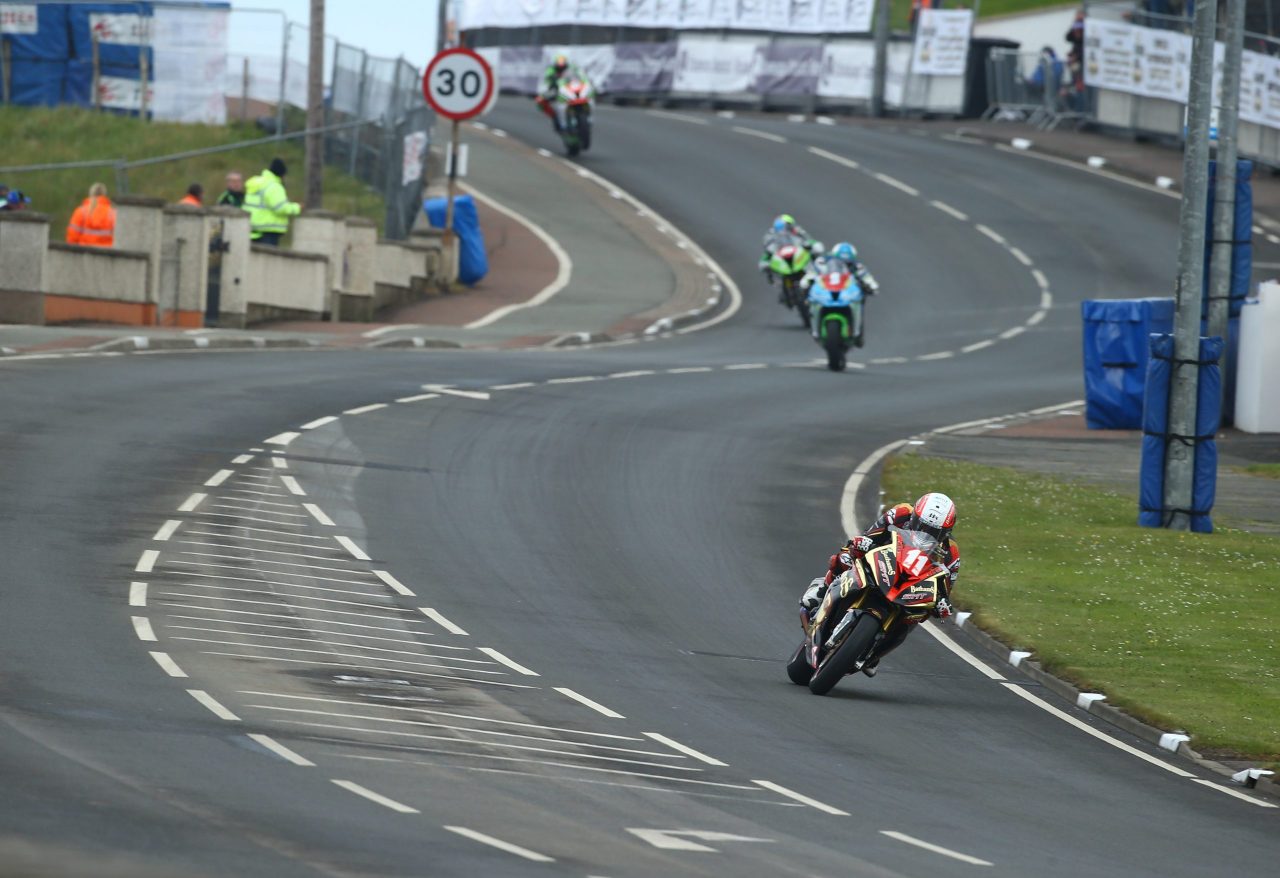 In 1996, a third chicane was added at Magherabuoy, designed to slow riders on the high, and long, speed run from the roundabout to the Metropole. The course layout stayed the same until 2010 when fourth, purpose built chicane was added at Mather’s Cross in order to reduce speeds at the corner. The course now measures 8.970 miles with a distance of 8.834 miles being covered on the first lap of every race due to the location of the start line.

After the problems in 1972, the NW200 had a trouble free run until 2001 when the foot and mouth epidemic that was sweeping the UK intervened and resulted in both the North West and following TT to fall victim to the disease. Aside from that, the only other year when the races suffered a major problem was in 2011.

Poor weather conditions were already coming into play when significant delays, resulting in the evacuation of the paddock, were encountered due to a hoax bomb alert. A major oil spill on the track then meant the racing was cancelled after the completion of just one race.

Meanwhile, significant changes took place in 2010 with daytime practice for the first time whilst 2012 saw the introduction of races on Thursday evening, the first time they had been held other than on the traditional Saturday race day.

One significant note about the North West 200 is that a sidecar race has never been held.

With the first ever race meeting held in 1929, check out the massive milestones of the North West 200…

1929 – The first meeting, organised by the City of Derry & District Motor Club, took place with a handicap race of 200 miles being held.

1930 – The start and finish was moved from to the Portmore Road in Portstewart.

1934 – Jimmy Guthrie wins the first of four successive 500cc races and sets the first ever 80mph+ lap in the process.

1939 – The last meeting before the outbreak of the Second World War.

1947 – Racing resumes on the Triangle circuit after the end of the Second World War despite shortages of fuel and tyres.

1948 – No racing held due to the unavailability of fuel supplies.

1953 – Gilera make their debut at the NW 200 ridden by Dickie Dale and Reg Armstrong.

1958 – Mike Hailwood makes his one and only appearance at the North West 200, finishing second in the 250cc race.

1963 – No racing due to logistical and financial constraints.

1964 – The first year the Coleraine and District Motor Club organised the event, doing so ever since.

1971 – The final year the races were held over the original circuit, which ran along the length of the Portstewart promenade. Race winners were John Cooper (500cc), Paul Smart (350cc) and Derek Chatterton (250cc).

1972 – No meeting due to civil unrest in Northern Ireland.

1973 – The start and finish moved to its current location between Juniper Hill and Millbank Avenue.

1977 – Ray McCullough and Tony Rutter (both Yamaha) cross the finishing line together at the end of the 350cc race, the only dead heat in the history of the event.

1979 – Joey Dunlop wins his first races on the Triangle circuit in the events 50th anniversary year.

1980 – The link road from University Corner to Ballysally Roundabout was first used.

1982 – New Zealander Stu Avant becomes the first overseas rider to win a race at the NW200, taking victory in the 500cc race.

1987 – Joey Dunlop takes a hat-trick of wins with victory in both Superbike races and the 750cc Production race.

1988 – Steve Cull upstages Dunlop with a hat-trick of wins in the first 250cc race and both Superbike races.

1994 – Robert Dunlop gave the Honda RC45 its first ever International victory, winning the first Superbike race and then going on to complete the double. He one again scores a hat-trick with a 125cc win also.

1996 – The Magherabuoy chicane is added to curb speeds on the run in to the Metropole.

1999 – David Jefferies takes a treble at the meeting with a 600cc win and victories in both Superbike races.

2000 – Joey Dunlop competed in his last ever NW200 meeting, lining up in pole position for both Superbike races.

2000 – Michael Rutter takes a hat-trick with victories in the 600cc and both Superbike races.

2001 – No meeting held due to the Foot and Mouth epidemic.

2002 – Bruce Anstey made his debut, setting pole position and then winning the Production race.

2004 – Michael Rutter makes history after becoming the first rider to go through the speed trap at more than 200mph.

2006 – Steve Plater takes his first wins, taking victory in both Superbike races, eleven years after making his debut in 1995.

2006 – Nigel Beattie becomes the first and only rider from the Isle of Man to win a race, taking victory in the 250cc.

2012 – Daytime practice is held for the first time.

2012 – Martin Jessopp records the fastest ever speed recorded through the speed trap at 208mph.

2018 – Glenn Irwin wins the feature Superbike race, the first for Ducati since 2008.

2018 – Irwin takes both Superbike race wins whilst another hat-trick sees Seeley move onto 24 wins and 36 podiums.

2019 – Stefano Bonetti becomes the first Italian rider to win a race at the North West 200, and only the fourth overseas rider in total, after taking victory in the first Supertwin race.

2019 – The meeting sees seven different winners in the seven races with James Hillier and Davey Todd also taking their first wins at the event, the latter claiming his first ever International race victory. Richard Cooper becomes the first newcomer since 2015 to finish on the podium with second place in the Superstock race.

2019 – Glenn Irwin, Dean Harrison and Alastair Seeley all lap inside the outright lap record during qualifying with Irwin setting the quickest ever lap on the current circuit layout, 123.362mph.

Pierre Yves Bian becomes the first Frenchman to win at the North West 200 and just the fifth overseas rider ever, with victory in the first Supertwin race.

Now it’s time to learn every twist and turn of the North West 200 course!

North West 200 Things to do