We’ve had the pleasure of catching up with Hans Kemp the Dutch photographer of the impressive coffee table must-have photo book, Bikes of Burden – a tribute to Vietnamese motorcycle riders who use their bikes to inventively to carry some unimaginable cargo. You’ve got to see them to believe it, and we clearly don’t recommend trying any of these yourselves… 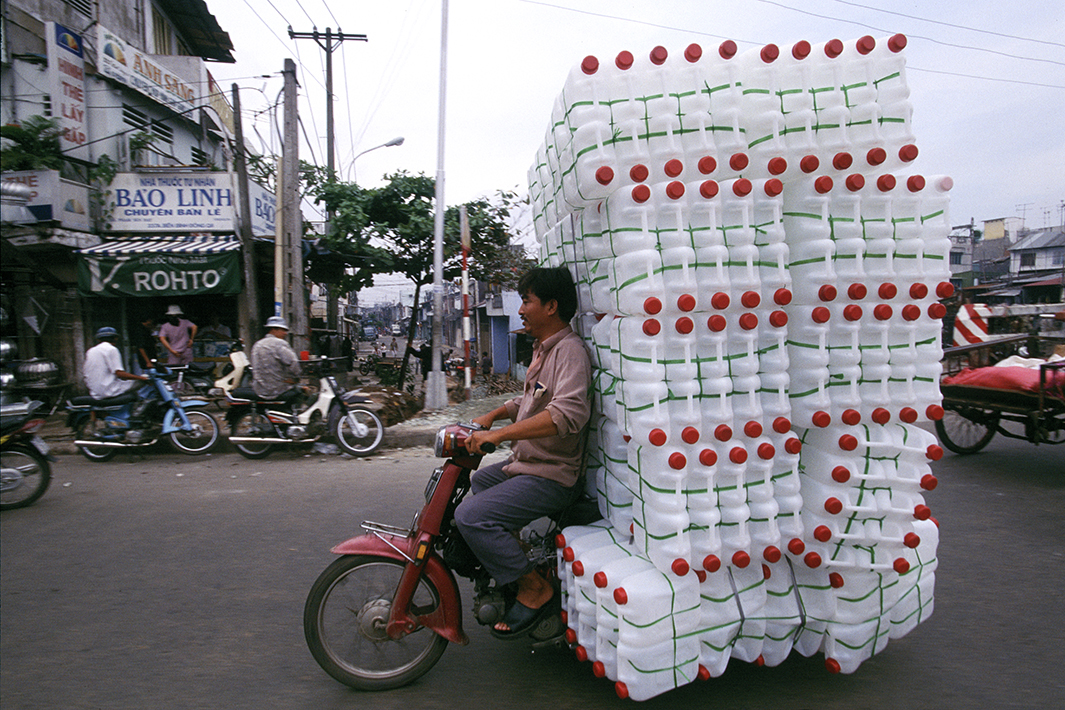 Thanks for your time today Hans, some quite unbelievable photographs here! Can you tell us the inspiration for this incredible project?

A customer of mine wanted me to take a few photographs of stuff that people carried on bikes in Vietnam, for a gift to a manager returning home. I took the images and just continued the project, realizing there was so much variety. I had been living in Vietnam for quite a few years by that time and saw these things every day. Sometimes you need an external eye-opener to appreciate what you see everyday.

Why do you think these photos appeal to people?

The tenacity of the people is inspiring. The humour is undeniable. And it is so common. Everyone who visits the country will witness at least some of it.

Mostly behind the window of a car or bus so very hard to photograph. People connect to these photos because it is part of their own experience. 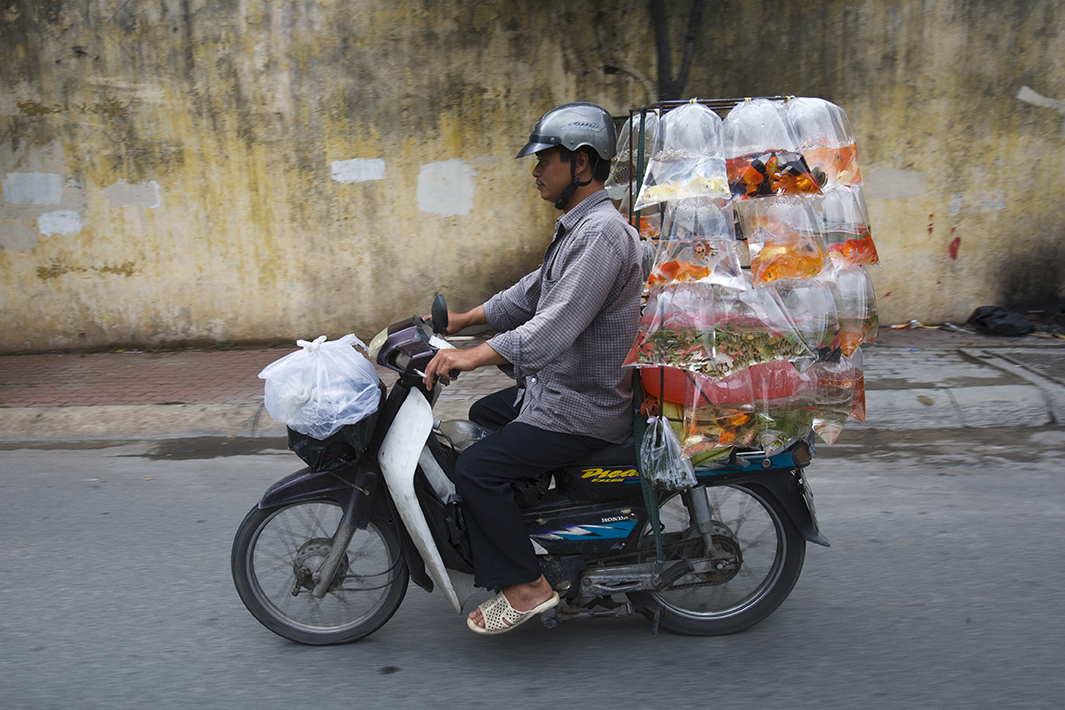 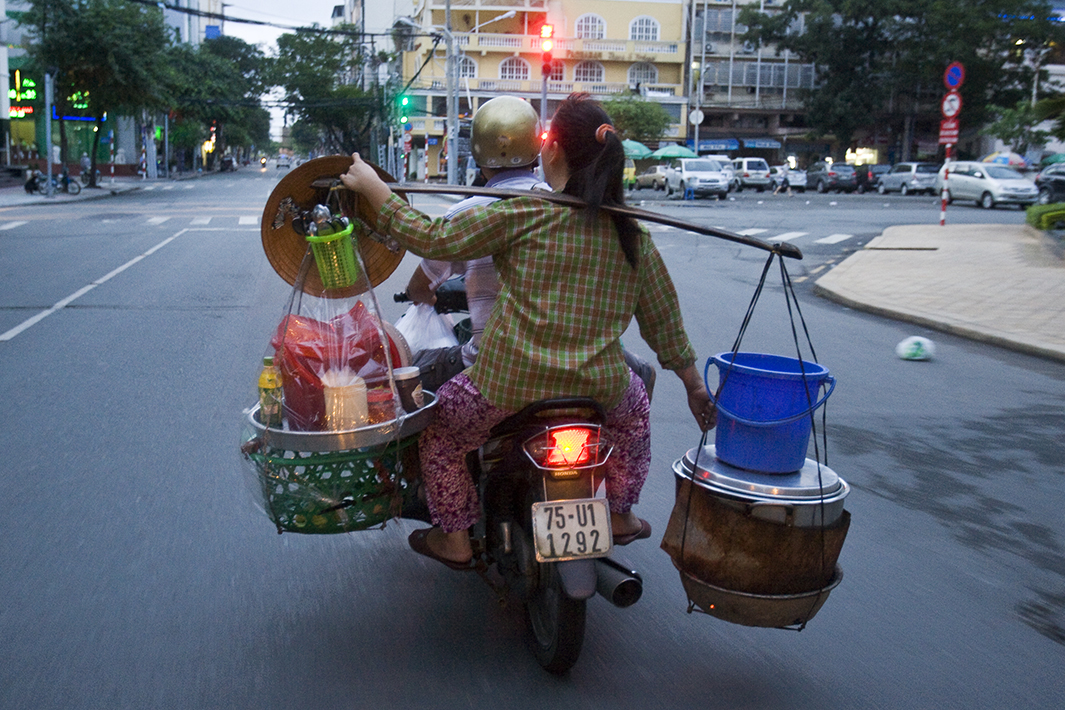 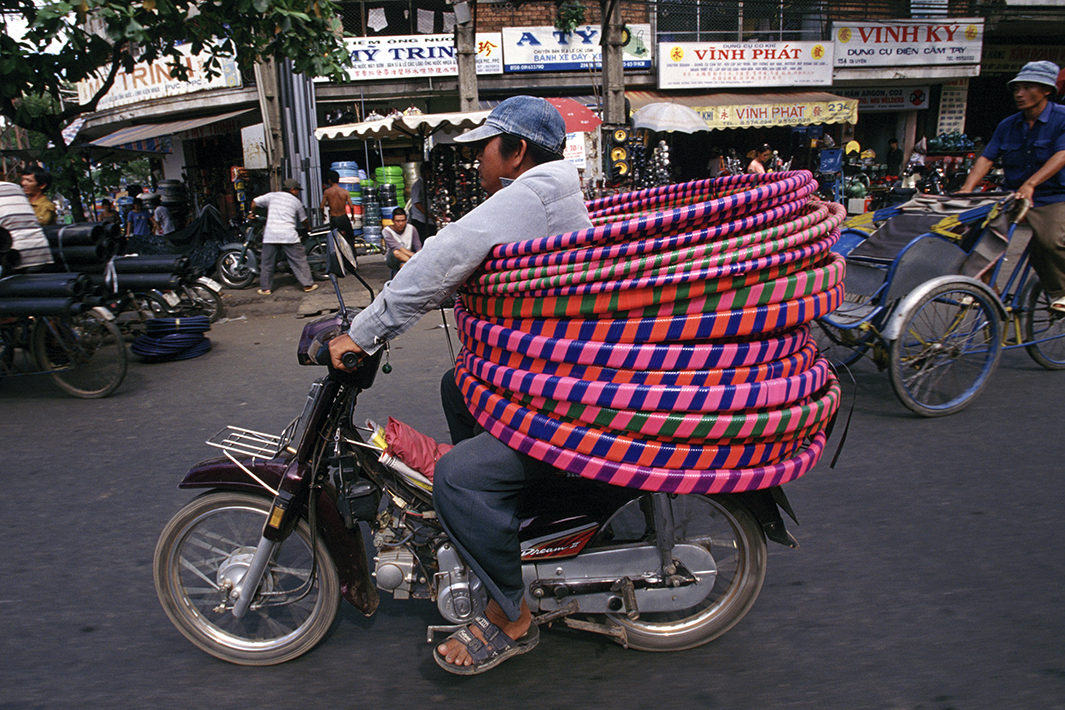 How would you describe the Vietnamese’s relationship with the motorcycle?

Motorbikes are a relatively cheap and fast mode of transport on the clogged up streets of Vietnam. This combination and the abundance of small businesses make it an ideal form of transport. For the Vietnamese a motorbike is an essential part of everyday life. It is one of the first items on the wish list.

How did you go about getting these shots? We assume you were on motorbike yourself…

I travelled on the back of motorbikes for hours and hours and days and weeks. In Vietnam motorbike taxis are a common form of transport. They are called xe ôm, meaning vehicle hugging. It is a reference to the passenger holding on to the motorbike driver for a safe journey.

I had a favourite xe ôm driver, his name was Minh, I tried to use as often as possible. He was a safe driver and helped me to spot subjects to photograph. We would go out in the early morning and just cruise the streets of Saigon and when we saw an interesting load on a bike we did a u-turn and chased the other bike. Once we caught up we would drive parallel and I would take the photograph. This was not always easy as some of the bikes drove really fast – they get paid by the load delivered so the quicker they are the more money they make – or oncoming traffic made the chase dangerous.

So, what bike were you on?

On the back of a Honda SuperCub 70 or Honda Dream or similar. In the end it was a pain in the butt (literally), after hours of being seated like that. 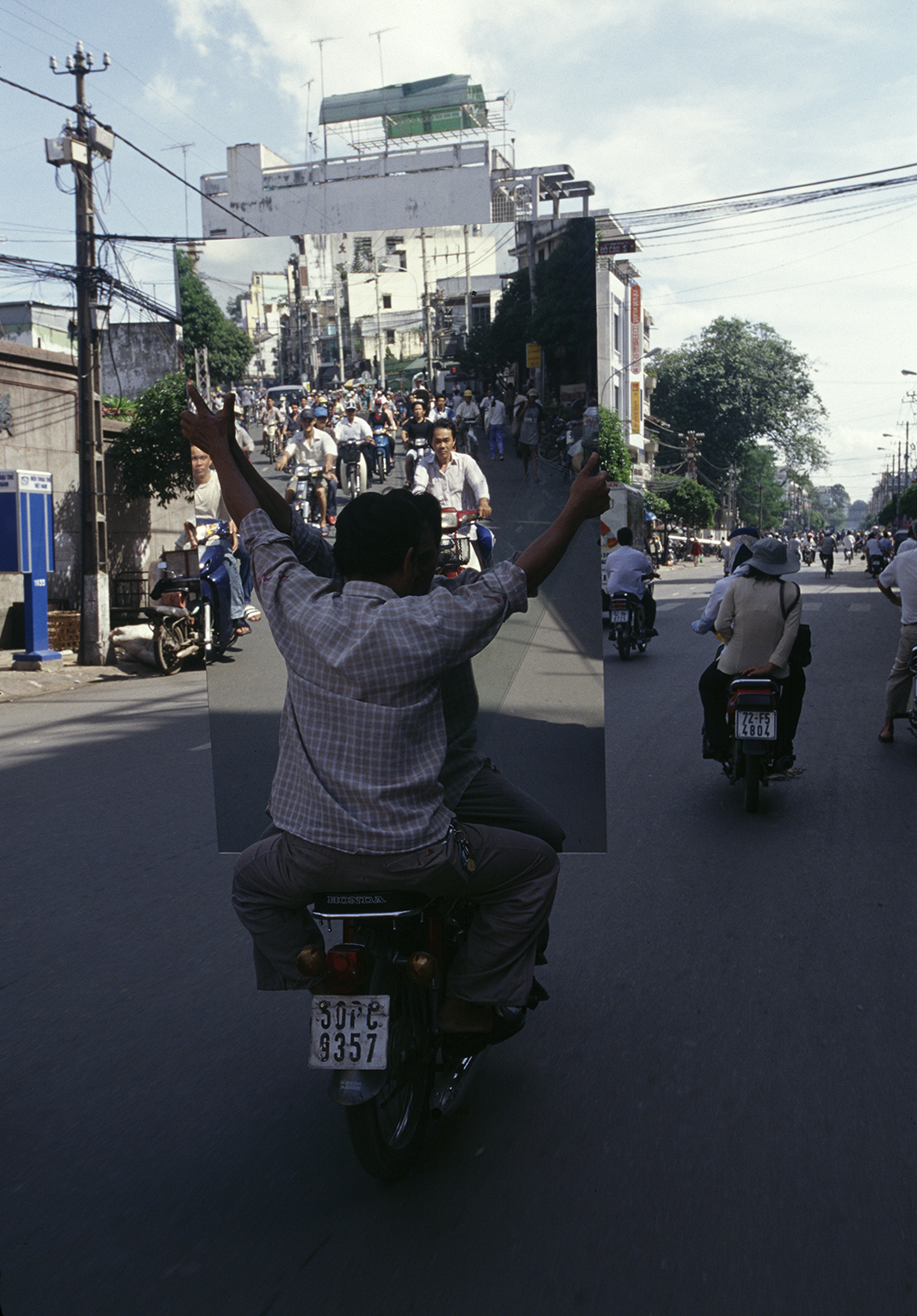 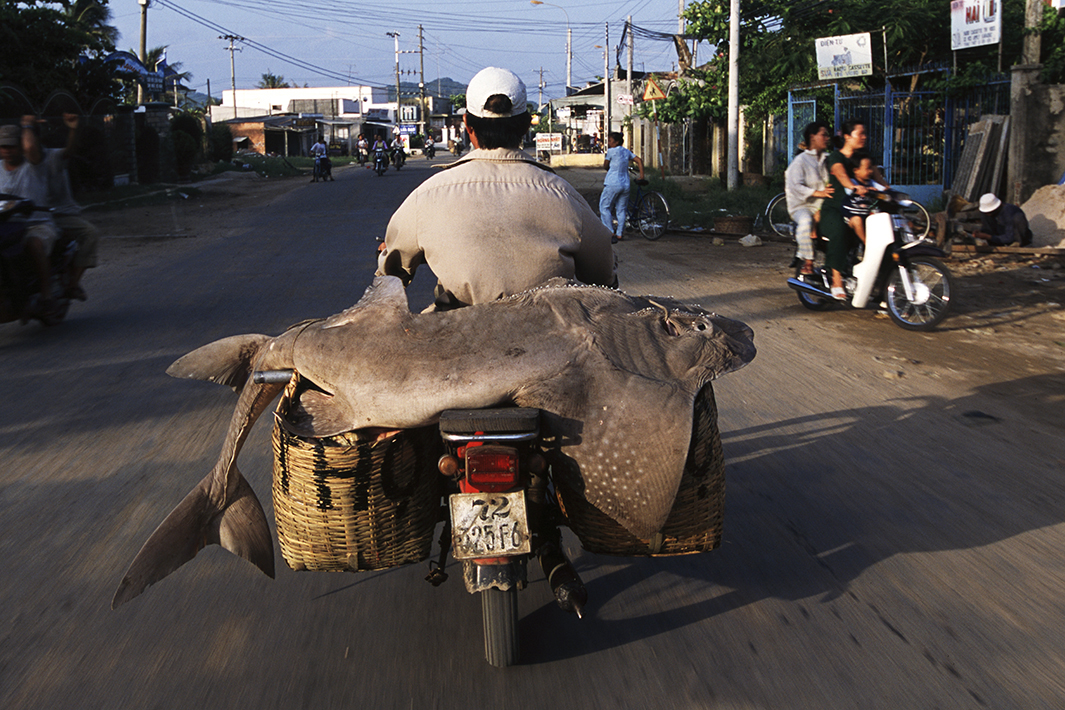 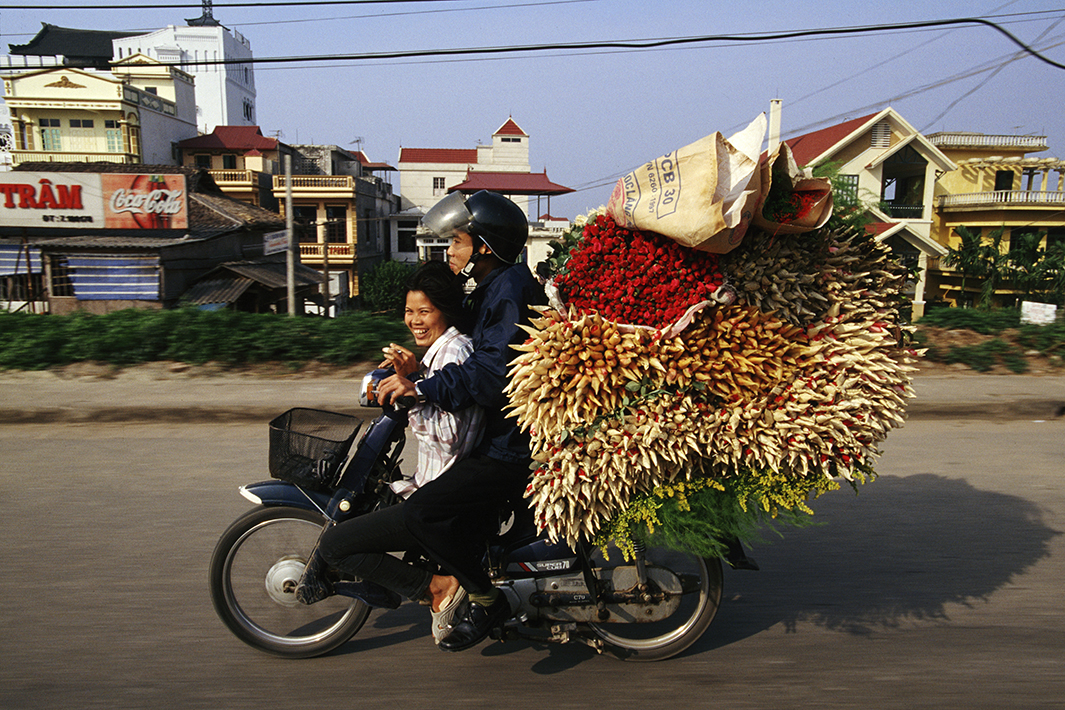 Did you ever speak to the people in your photos?

Everyone is driving along with a delivery to be made. No time to stop at all. No time to object to being photographed either though by far most of the drivers reacted bemused that a foreigner thought it worth photographing what they considered so normal.

Did anyone object to their photo being taken? Any worrying encounters?

No objections though I once saw a prisoner being transported on a bike, wearing a striped uniform, seated in between two police men, the last one with a machine gun casually slung across his back. I shied away from photographing this. Wish I had though. 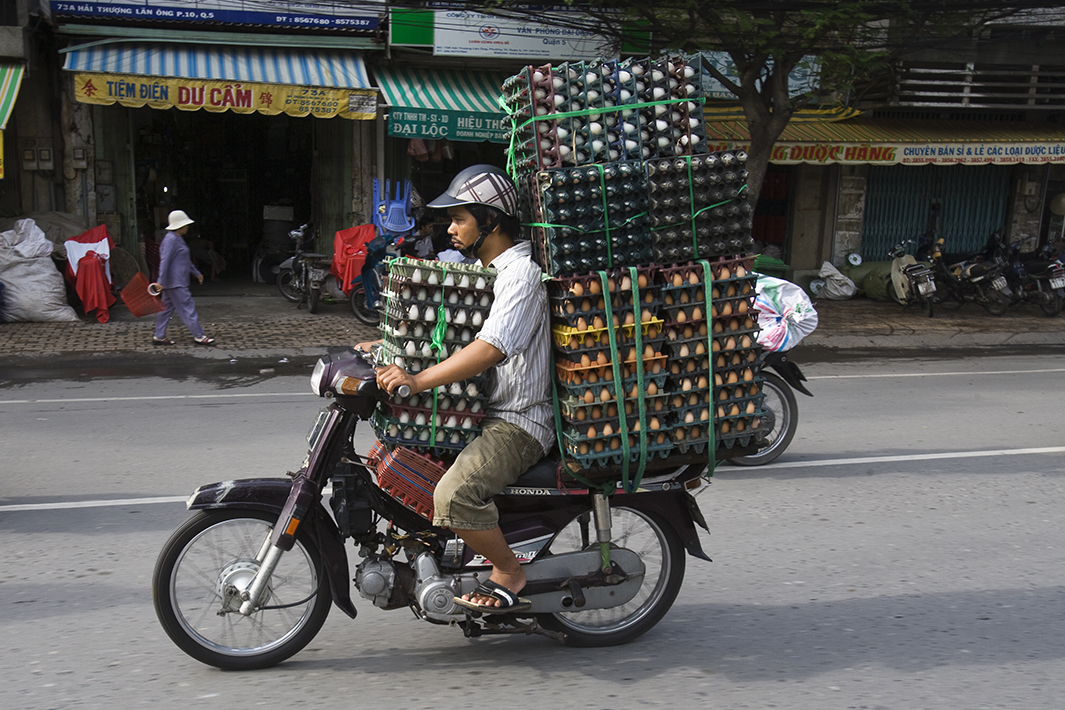 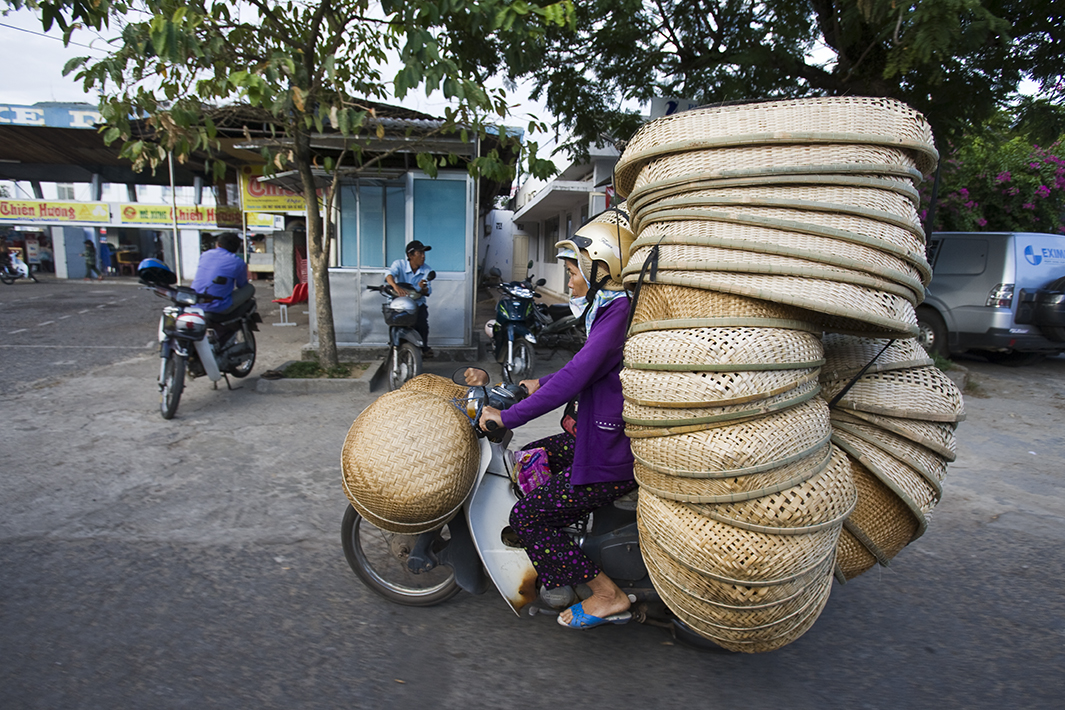 This book is often described as great for the coffee table. What do you think makes a good ‘coffee table book’?

A topic that grabs people and is a good conversation starter, executed with a mastery of light and composition accompanied by an interesting and informative text, printed to a high standard.

Do you have any future motorbike related projects coming up? If not, what is in the pipeline?

Not really any idea for motorbike related projects. I did a similar book on transport in Cambodia with Irish photographer and Phnom Penh resident Conor Wall. Not so many motorbikes in that book (called Carrying Cambodia) but a lot of other crazy transport.

I like to travel and work on projects. Last year I completed a book about Myanmar called Burmese Light together with acclaimed author Tom Vater and I am working on a long term project about spirits and spirit possession, spirit mediums and trance all across Asia.

Thanks for your time Hans, fantastic photos!

Want to add Bikes of Burden to your coffee table? It’s available here. 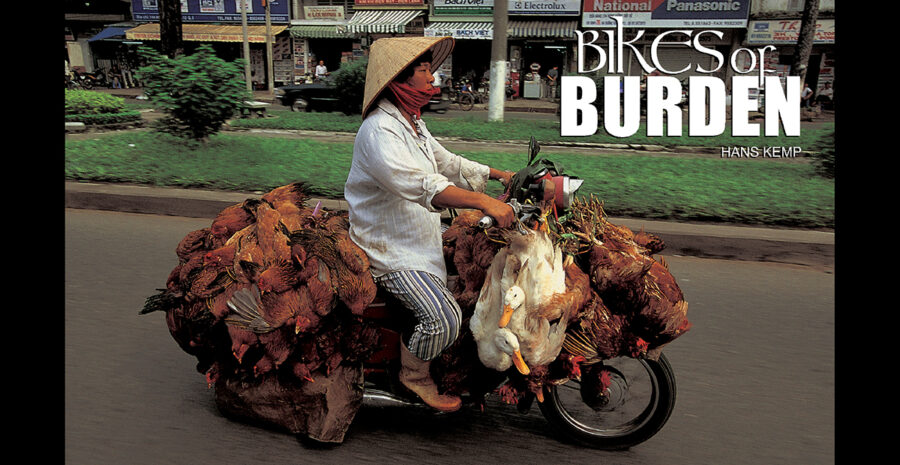 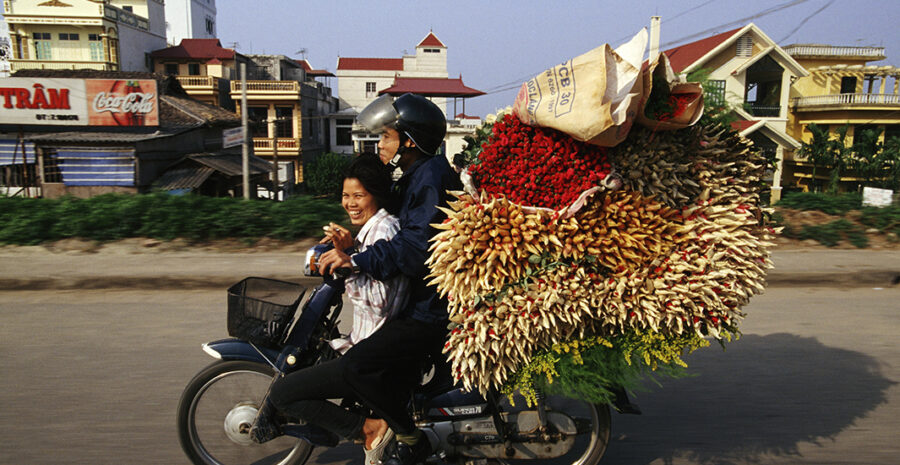 Check out some more of our latest motorcycle features here...

Motorbike overview: everything you wanted to know and more

Who Is the G.O.A.T? Hailwood vs Rossi