As the Covid-19 lockdown eases, and the nation returns to work, we’ve investigated how our daily commute is changing.

Across the nation, many Brits have tackled three months of working from home, and while it hasn’t always been smooth sailing it’s fair to say that returning to a daily commute – particularly if it involves public transport – may seem rather unappealing. So, as the lockdown eases, how do we plan to adapt our work journeys and preferred modes of transport? What will be the ‘new normal’ when it comes to commuting?

To find out more about how our attitudes and approach to commuting have been changed by the Covid-19 outbreak, we’ve undertaken some new research with 2,500 Brits. We ask our nationwide panel how long their commute is and what they previously spent on travelling to and from work each month, how they felt about commuting pre-lockdown and if this opinion has changed, what their preferred modes of transport are now, if they have any plans to alter how they get to work, and what their favourite commuter vehicles are.

Our commutes may be reasonably short – our survey revealed that 41% have a commute of just 0-10 miles – but it can still be expensive, with two-thirds of Brits spending over £100 per month on getting to and from work.

It looks like many Brits will have saved upwards of £300 by not commuting during the lockdown.

Commuting: Love it or loathe it?

Before the Covid-19 outbreak, 37% of commuters stated that they actually enjoyed their journeys to and from work, but roughly one in five (17%) really didn’t enjoy it. 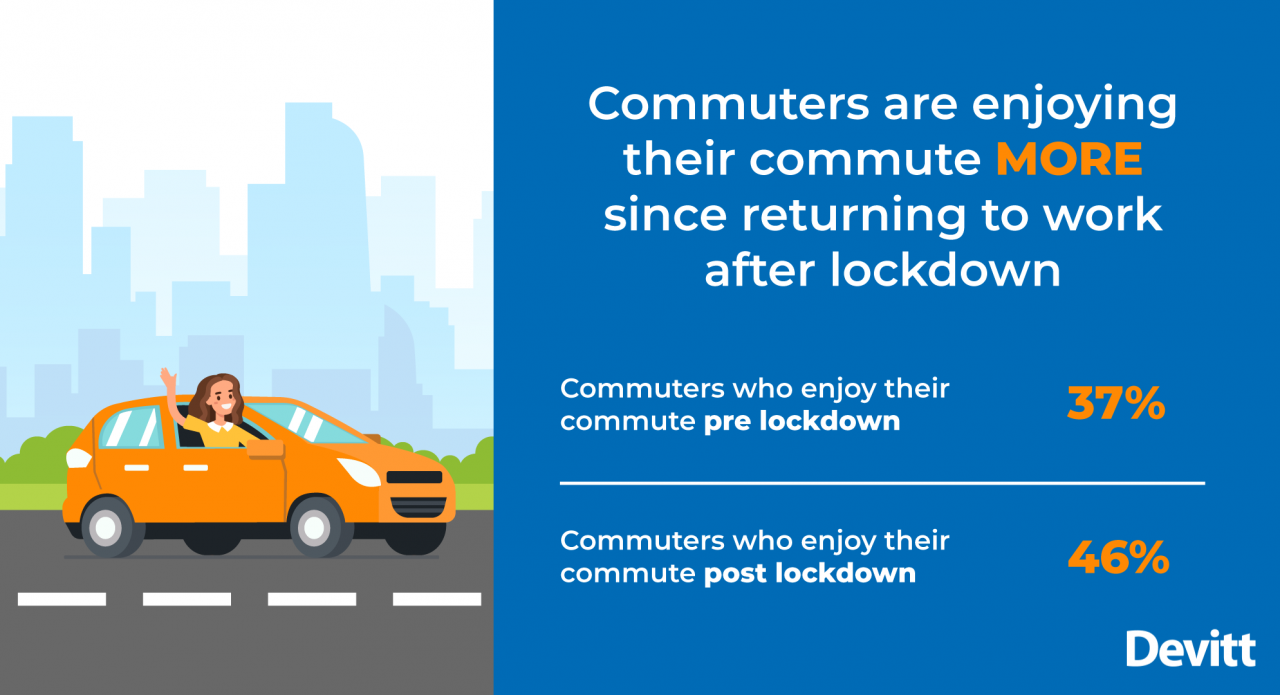 Of those who have returned to work already, 46% said they now enjoy their commute, up from 37%. Fewer aren’t enjoying it too – just 9%, down from 17% pre-lockdown.

Those in Northern Ireland have seen the biggest increase in commuter happiness since lockdown, with a 47% increase from pre-lockdown levels.

Reasons for a happier commute may include quieter roads and trains/buses, leading to reduced journey times, and perhaps just gladness at finally being out of the house!

But as commuter numbers increase again, our enjoyment of the journey may decline, and stress levels could rise.

Stressed out by commuting

While the number of people who are enjoying their commute now is surprisingly high, the stress of travelling is clearly still a concern for many – and could only get worse as more people return to their workplaces.

A third (33%) of those we polled stated they feel stressed during their commute.

Those in their thirties are the most stressed out commuters, with 40% stating that they feel stress during their commute.

One in eight (12%) stated that they feel particularly stressed in the first 10 minutes of their journey, but then relax into it.

The South East of England has the most stressed commuters in the country with 37% feeling very stressed on their daily commute.

Wales has the least stressed commuters in the country, with only 29% feeling any stress during their commute. 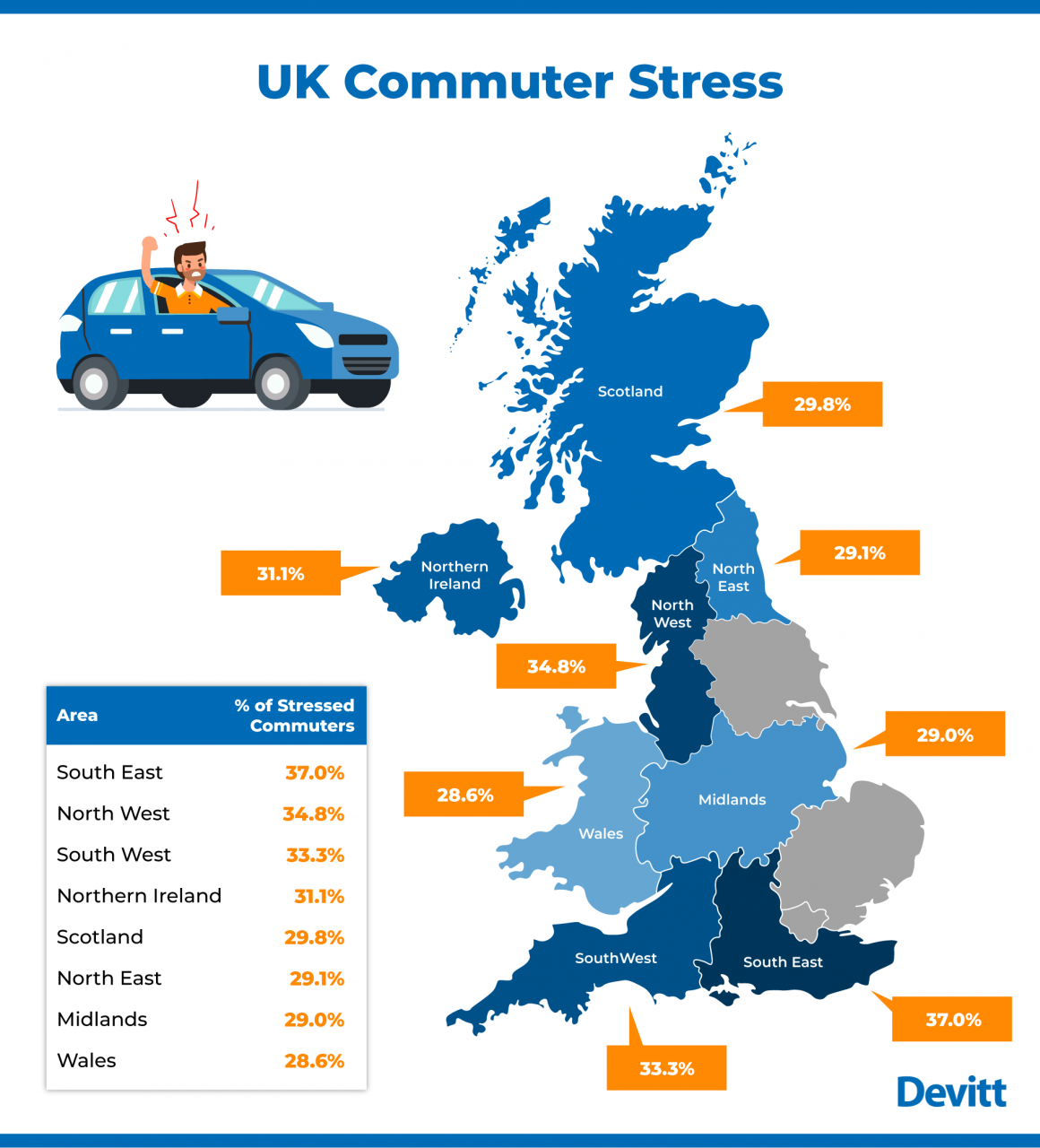 Our favourite ways to get to work

The car is the country’s preferred commute mode of transport post-lockdown, getting 51% of votes. It was particularly popular with those aged 30 and over.

So how will things shift in the coming weeks and months? One in six (16%) said they plan on changing their commuting mode of transport following the Covid-19 outbreak.

Women are more likely to change their commute mode of transport than men (25% vs 16%), and those in Northern England and the South East are also looking for an alternative way to travel too (19%).

A staggering 76% of commuters who used public transport to get to work pre-lockdown, plan to change to a different mode of transport now, and journeying via a motorbike was the number one option for those looking to switch from public transport (75%). 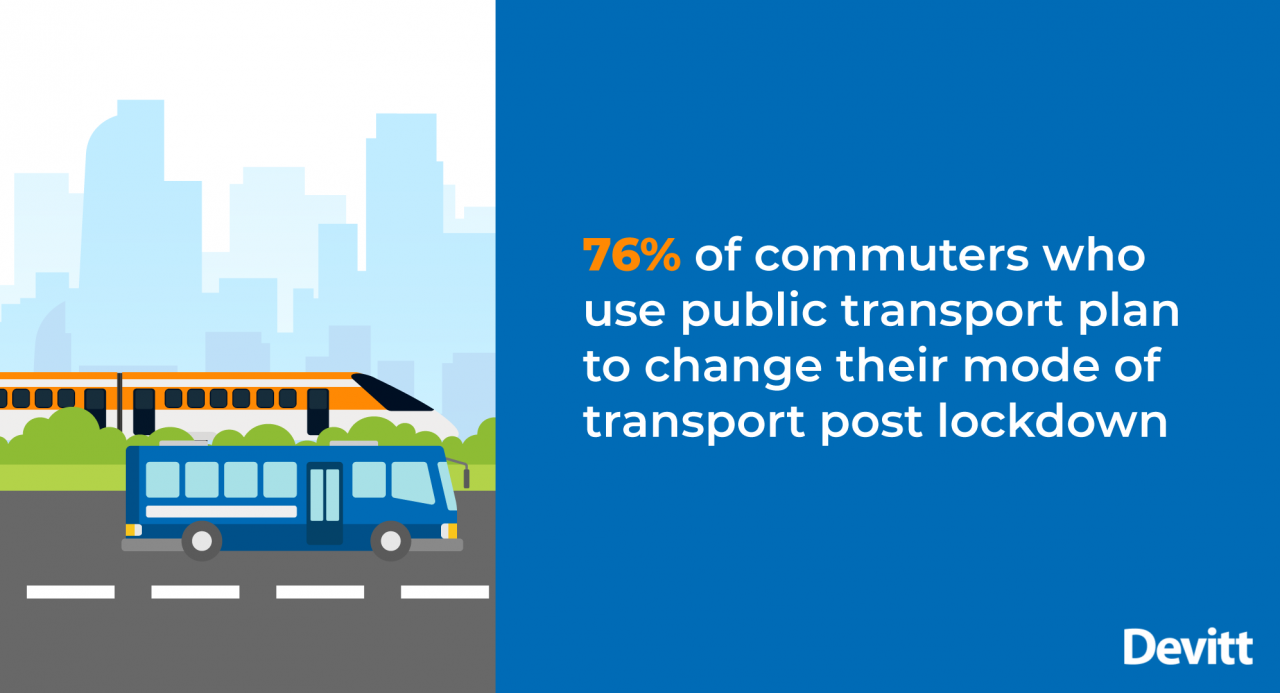 More than eight in ten (85%) respondents from Wales and Northern England (83%) who said they will be changing their commute mode of transport plan to switch to a motorbike. 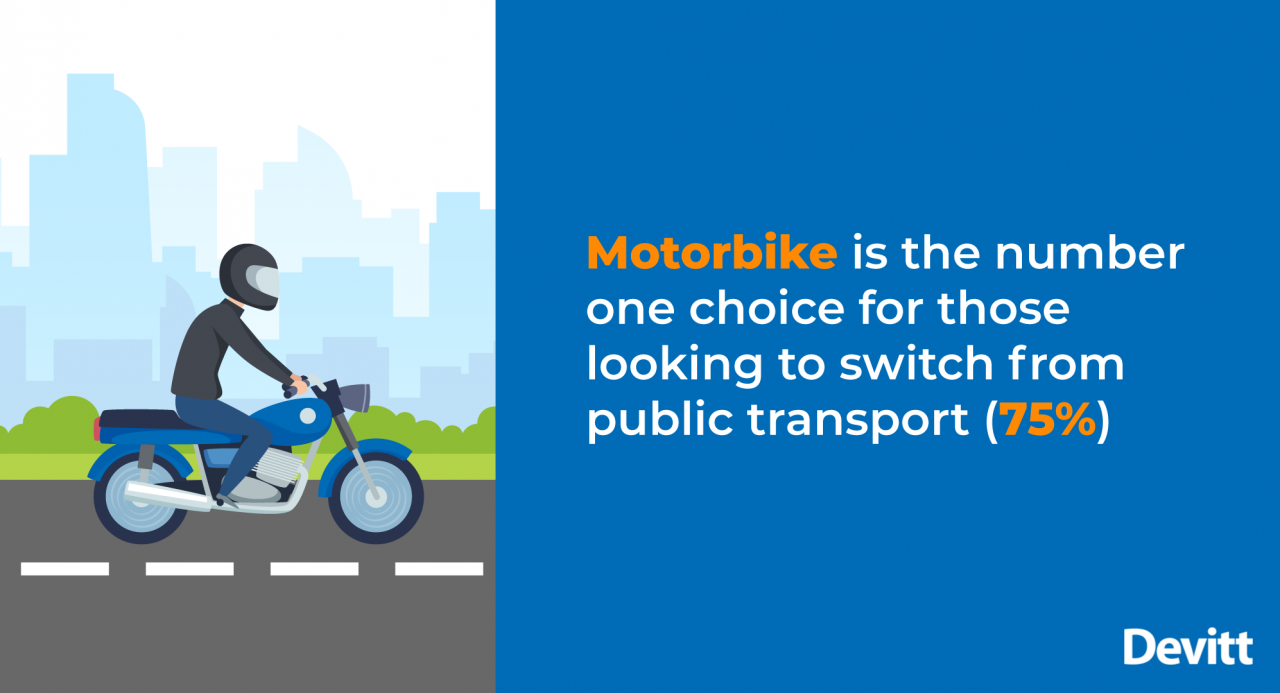 It looks like we can expect many more motorbikes on our roads in the coming months, and it certainly could be a good option for many. Many bikers report reduced journey times (even in heavy traffic) versus travelling via car or public transport, more options when it comes to parking, and even reduced stress levels.

Of course, anybody looking to switch to a motorbike will need the necessary licence and motorbike insurance, and may want to consider an electric bike as a more eco-friendly (and cost-effective) vehicle alternative.

Those opting to travel by car should also revisit their car insurance policy to ensure they have the necessary commuting cover in place. Everything you need to know about car insurance is covered in our handy insurance guide.

"Operator was well informed and polite. Price was ok, although..."