There are various models of this bike and they really do differ from year to year. The 2006 and 2009 models have big differences in terms of the new angular top fairing, monoblock calipers and the suspension. Overall, the Triumph Daytona 675 is a very good alternative to the Japanese super sport bike market and whichever version you get, you’ll be impressed.

The high seat of this bike will make you feel immediately in control of this machine – although it can feel a bit intimidating at first. The screen is typically low and the steering is quick but stable.

You’ll find the midrange horsepower makes the Triumph Daytona 675 a great ride whatever the terrain. If you’re on a track day, this bike can give you a shot of adrenaline no problem. The engine doesn’t feel like it’s working too hard and really doesn’t break a sweat.

Overall, this bike is a reliable number that can excite most riders. This brand won’t let you down, either. It has a good history of stability and reliability, even in the older models. You can get your hands on a large range of accessories too, such as a plug-in quick shifter, Arrow exhausts and a lot more. 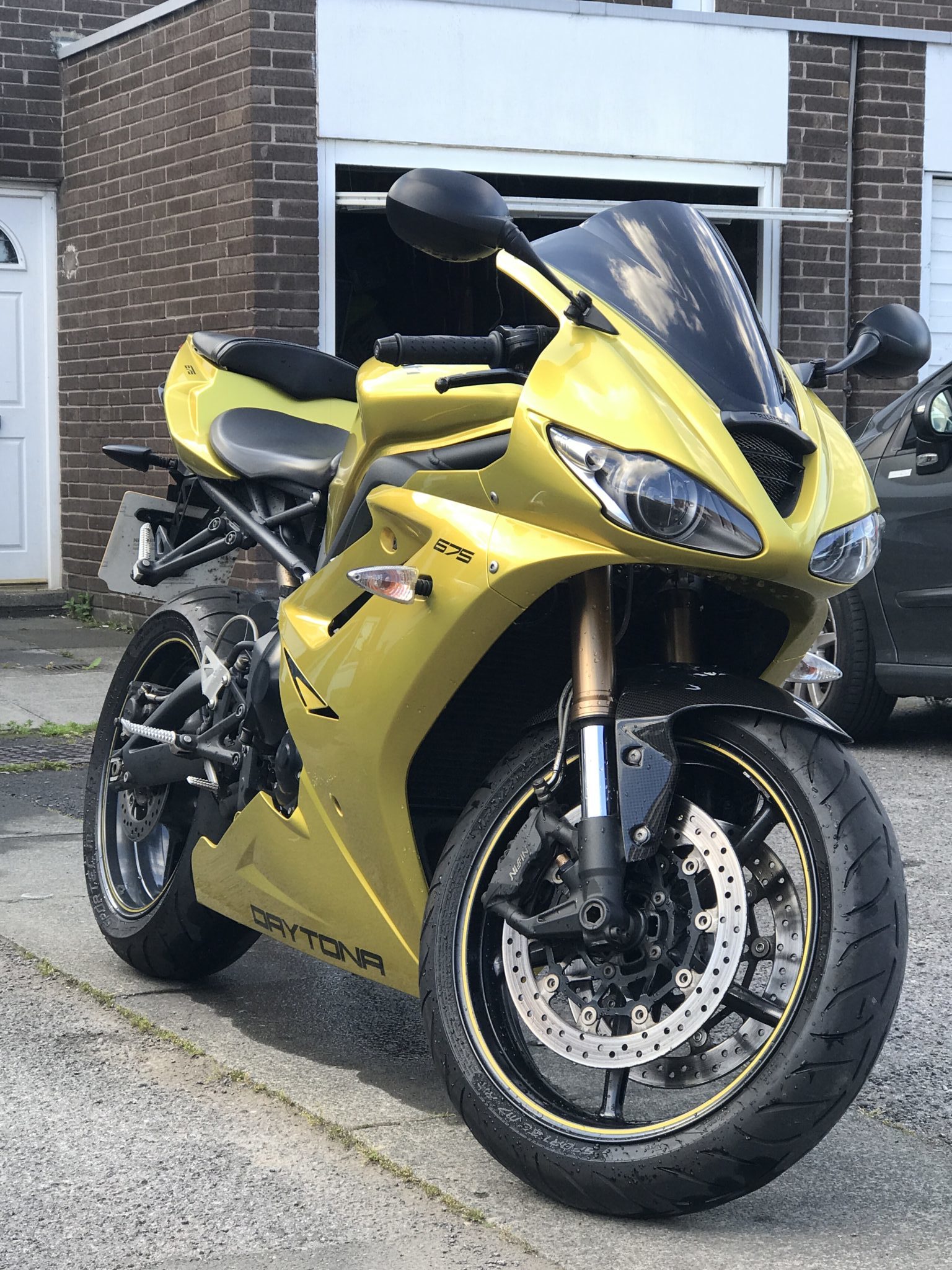 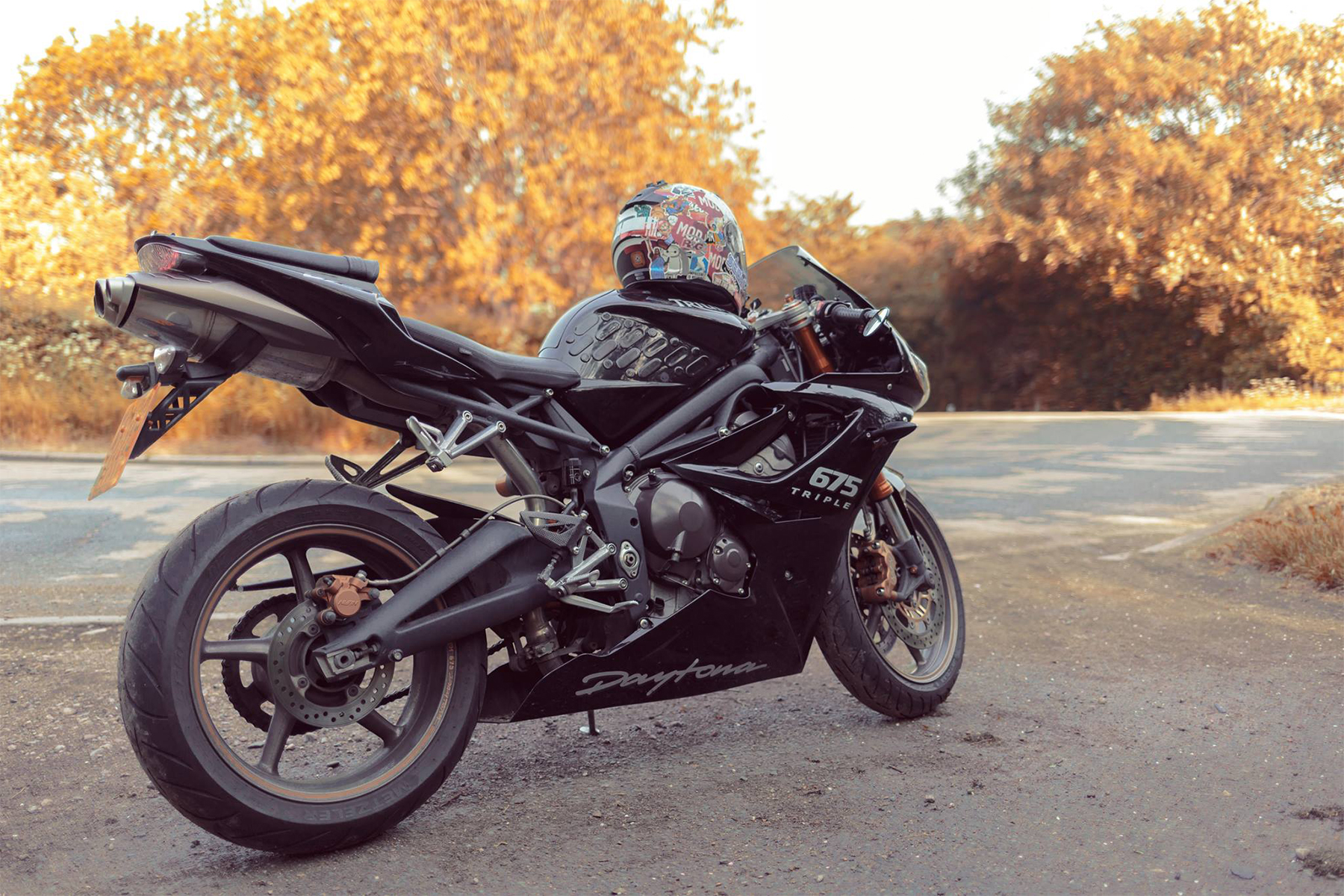 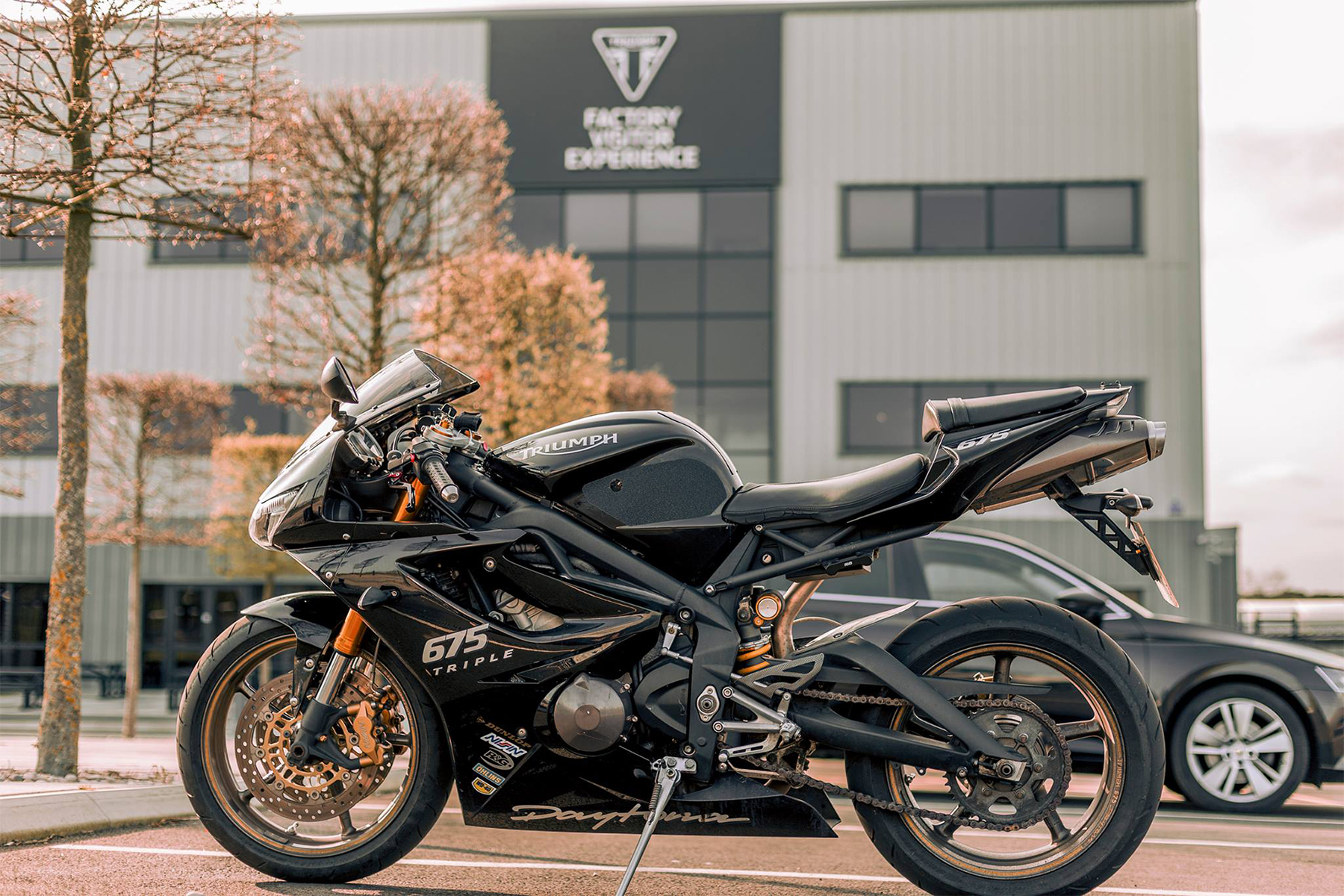 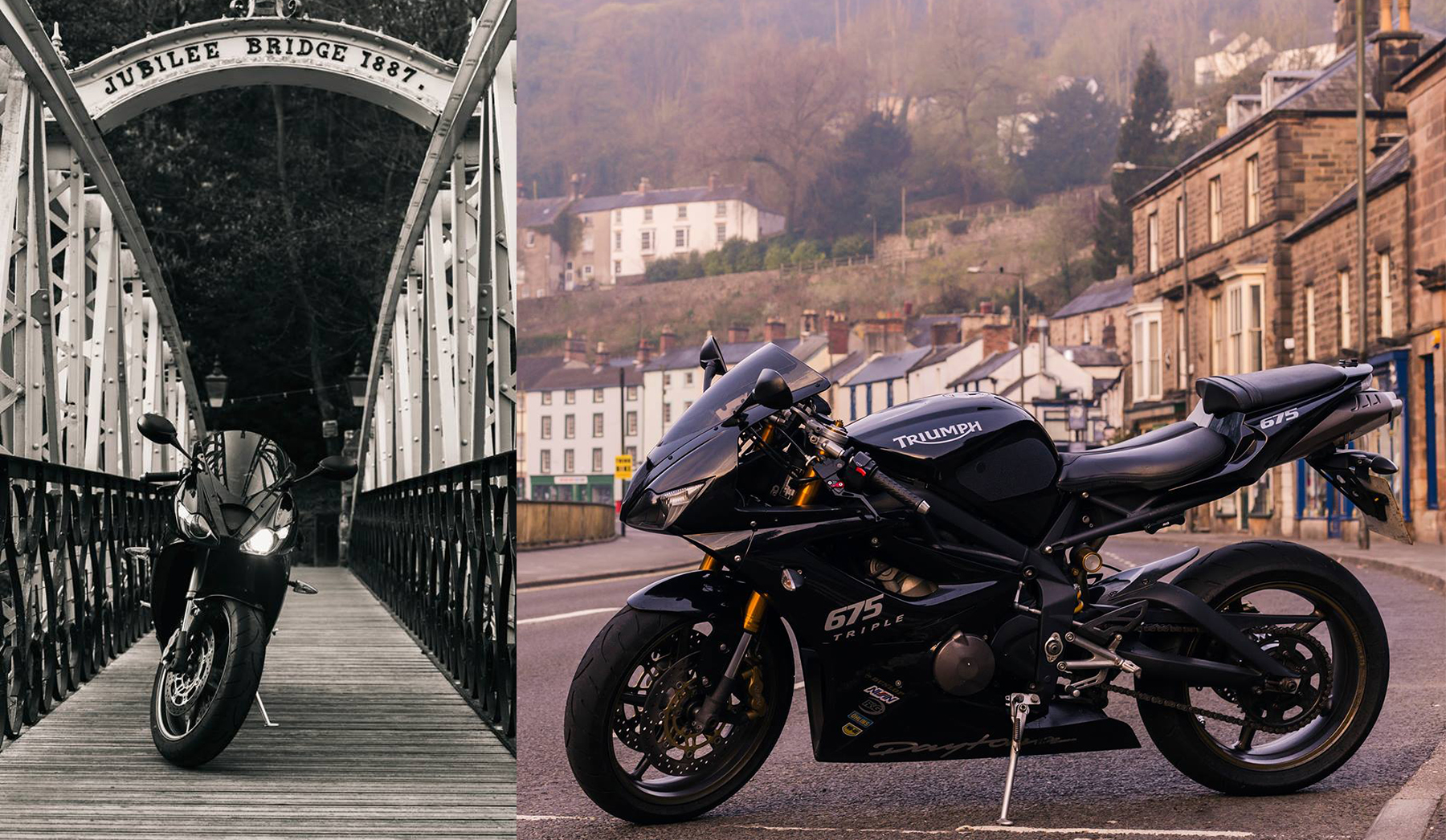 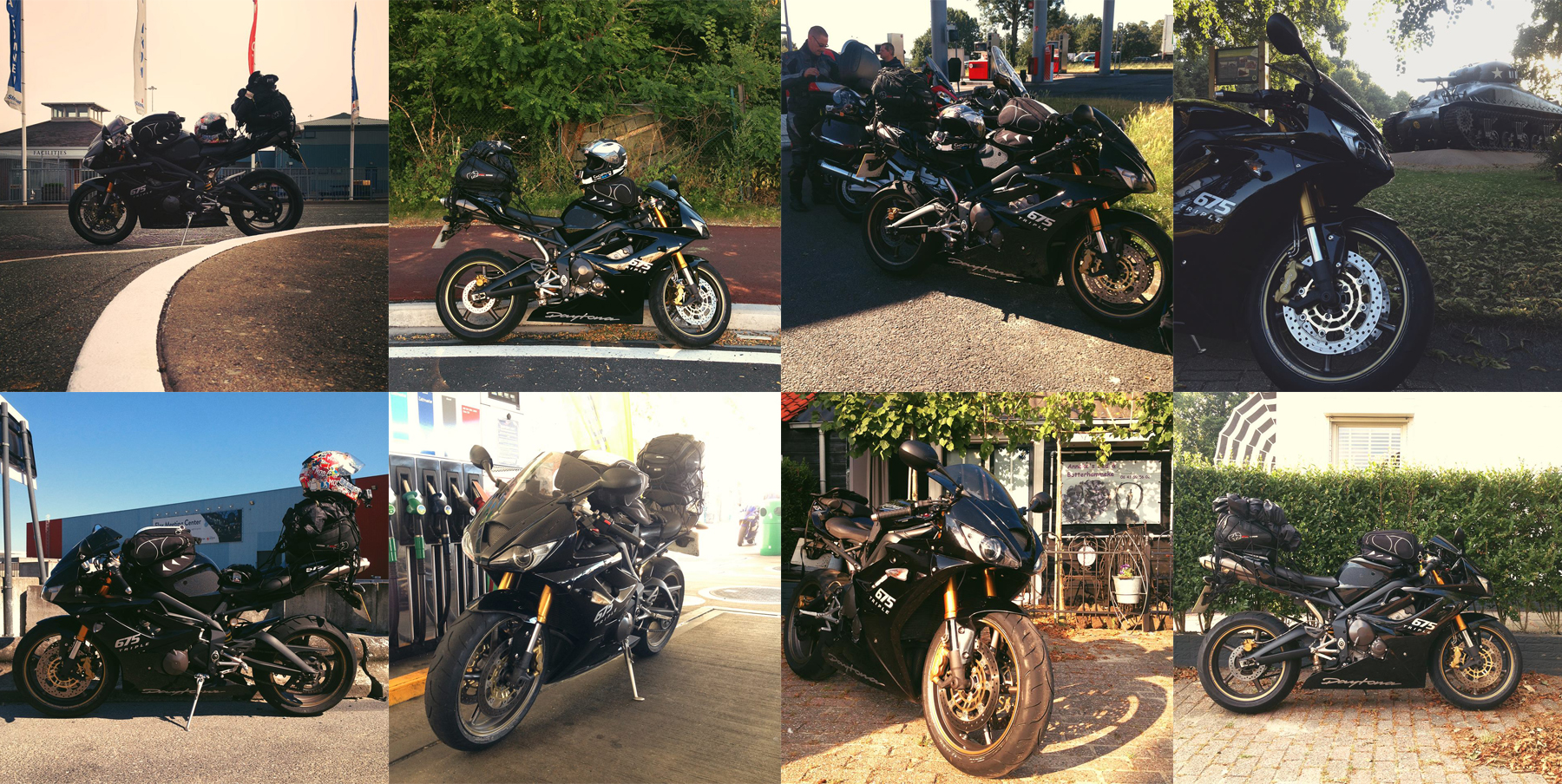 Super responsive, super build, super feel and super speed just a super bike. The look I still love how it looks and feels to ride.

Wish I got the arrow exhaust

Wish I got the arrow exhaust

Stops on a dime

Colin Walker 4 out of 5 stars

All depends on how you ride.

Not too bad just a matter of keeping it clean

Alan Thompson 5 out of 5 stars

The sound as you accelerate

Hand on heart, this is the best bike I have EVER ridden, and I cannot see myself ever selling her. In my eyes, there are no cons, yes it's not very comfy on long journeys, fuel consumption is numerous and insurance is high, but in my eyes, that just adds to her character! The amount of power Triumph have squeezed out of this engine is incredible and I honestly feel they have made one of the best bikes out there available today with the 675R.

Super light and super nippy. Never ridden anything that handles quite like the 675.

You would not know it's a 675, very easy to out run a thou both on acceleration and top end! As for the power band, it's just constant! From 2k revs to 16k, this bike just keeps pulling. And if you pin it... Well hold on tight!

Probably the only downside of the bike, insurance is one of the highest band and I am yet to get triple figures from a full tank. But then again, you don't buy this sort of bike for its MPG!

Beautiful build, I am yet to find a blemish or a fault from factory

Having front Brembo's really finishes the bike off. Whether you're late braking into a corner or emergency stopping cause of a cager pulling out in front of you, the Brembo's have got you covered!

Stephen Simons 4 out of 5 stars

Put quite simply, the best thing about my bike is the way it makes me feel. Riding my Daytona 675 is the very manifestation of what one can only imagine riding a motorcycle is SUPPOSED to be when you are a child. To look at (see image 05), think about and ride, it makes an otherwise ethereal and exciting notion tangible. The best thing about my bike is how it bridges the gap in an emotive and visceral way between my real, physical life now and the smokey memory of dreaming about sportsbikes as a boy.

When asked this question, I am sure that I won't be the first person who instinctively wants to say, 'the rider.' It is true that I am only a few years in to riding motorcycles and as I've grown into a more capable and confident pilot it is now that I am starting to really see the benefits, drawbacks and differences in a machine's parts and sum total. The 2009 model made significant improvements over the first Daytona 675 marque of 2006 (acknowledging but glossing over the lessons from the earlier TT600 and T955i models) but itself has been improved upon in more recent models. A revised instrument cluster, quick shifter, lighter wheels and frame, a bit more power; these are all improvements that HAVE been made to 'my bike' (arguably) and make the Special Edition and 2013 onward versions/models very attractive. There is one thing that I would add to that list and it comes simply from my experience with the bike: a while ago now I had two punctures in relatively quick succession to the rear. Not a huge amount of time after that I changed the chain and sprockets and it all meant that getting the chain tension correct and torquing up the rear wheel became a more frequent task than it should have been. My improvement would be a slightly easier to use chain tensioning system than is standard. There are aftermarket kits, I know. I also know it's not really a deal breaker but there, that's my piece.

I have been riding this bike with Dunlop's Sportsmax Qualifiers on recently and once everything is warmed up a bit they are the final, sticky pieces to the confidence inspiring puzzle. The bike lets you change direction quickly and smoothly. Everything feels solid at all sorts of speeds and angles and the shifting up and down is a pleasure. It should be stated that as a novice-turning-intermediate rider I'm not exactly pushing the limits of the machine, but it is reassuring to feel like there is more of everything to give as my abilities grow.

In the two years of ownership the sheer drive of this bike has never failed to put a smile on my face. Ear to ear grinning. I must confess, part of the sensation of performance is the aural accompaniment to twisting the throttle. A seemingly impossible union of mechanical chorus and rising cacophony somehow blends to a very, very pleasant soundtrack. No, it doesn't have the eye bleedingly fast top end speeds of bigger sports bikes. That doesn't matter to me. Riding this Triumph over dales, around bends and to the coast and back is plenty quick enough on our roads. I think the claimed figure on release of the 2009 bike was 126 hp at the rear wheel, giving 75 Nm torque. The Triumph Daytona was always squarely aimed at established Japanese rivals (namely the Yamaha YZF-R6, Kawasaki ZX-6R, Honda CBR600RR & Suzuki GSX-R600). The performance is certainly there to mix it up and, even though I am biased, I think that it is delivered in a more beautiful package than the other four. Don't get me wrong, I wouldn't turn down any of the Japanese middleweights if I was offered one, but even an R6 nut must admit that the Daytona 675 is at the very least an original looking bike for the class.

I'd say I get 120 - 130 miles range before the fuel light comes on and even after then I have pushed it before refueling. From as empty as I dare, a tank full never pushes much north of £20 to brim back up to the 17 and a bit litre capacity. At the time of writing I've not had a full service done so cannot comment on the cost there. Aside from tyres (where you can essentially pay anything from £120 - £500 for a pair) and fluids (oil, coolant etc.) the main outlays have been a chain and sprocket replacement (circa £140), oil filters and replacing damaged parts after I dropped it on some gravel (new indicator at £20 or so, foot brake lever for about £30 and a crank case cover for over £150 from Triumph). Because the Daytona 675 models are no longer in production, I have found that parts can be both harder to find and more expensive.

My Daytona does not like the heat. I have grown so used to seeing those five little bars representing engine temperature on my LCD readout that the moment it creeps up to six, seven or, heck forbid, eight plus, it becomes a worry. To be fair, that only happens on particularly hot days where I have been unfortunate enough to be stuck in traffic, and I've always been able to get some cool air rushing through in time. I did deal with what is apparently a fairly common fault when I first got the bike. That being the solenoid valve opening up the air intake was not opening and closing as it should.

The Nissin four piston brakes up front do a good job of stopping you. There's an initial 'bite' of stopping power but otherwise a very predictable culling of speed. The amount of feedback means you can stop, turn and fire out of a bend with precision but also confidently trail brake if you need to.

"Love that I didn’t have to do anything"