These are the impressive records and stats that have been set over the past 60 years at the Southern 100 road race.

Exactly 20 years later, the first ever 90mph lap of the 4.25-mile course was recorded and it was Ulster legend Ray McCullough that put his name in the record books forever, achieving the mark in the 350cc race, the first event of race week.

We didn’t have to wait anywhere near as long for the first ever 100mph lap of the Billown Course and it came just eight years later. Again it was an Ulsterman, on this occasion Brian Reid and in 1983 he lapped in a time of 2m33.0s on his RG500 Suzuki to give a speed of exactly 100mph. A total of 189 riders have now achieved the feat with the first 110mph lap being set by Ian Lougher in 2005.

Dean Harrison set a new lap record of 114.601mph in the 2014 Solo Championship race and this stood for three years before the 115mph was broken by the Bradford rider along with local ace Dan Kneen and Michael Dunlop, the latter claiming a new outright lap record of 115.707mph.

Twenty eight riders have now broken the 110mph barrier with Michael Sweeney, Joe Ackroyd and Dominic Herbertson the latest three to achieve the feat in 2019. Davey Todd’s lap of 112.571mph in the 2018 Championship race is the quickest ever by a circuit newcomer.

It wasn’t until 1962 that the first Sidecar race took place at the Southern 100 and it was Charlie Freeman who took the honours with victory over Fred Wallis. Indeed, Freeman took four wins in five years before the 70s saw a lot more varied drivers take the victories.

However, it was in 1981 when history was made with the Irish pairing of Lowry Burton/ Martin Murphy, setting the first ever 90mph lap of the Billown Course. They knocked over three seconds off their existing lap record and recorded a lap of 2m47.6s, 91.28mph. 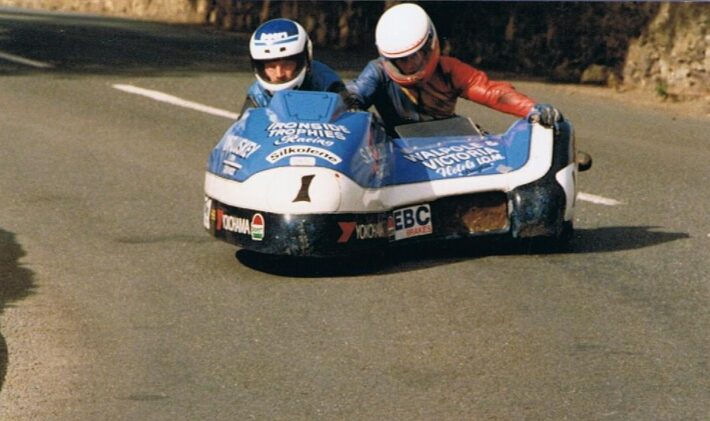 Unlike the solos, speeds didn’t increase as rapidly for the three-wheelers (although the removal of the Open class played a significant part) but Nick/Crowe/Daniel Sayle came oh so close to setting the first ever 100mph lap in 2007. Their lap of 99.778mph came under serious threat from Tim Reeves, Ian Bell and John Holden in 2015 but we only had to wait one more year before the magical 100mph barrier – and Crowe’s nine-year old lap record – was finally broken.

In a thrilling Championship race in 2016, Reeves, Holden and Ben Birchall all lapped at more than 100mph on the sixth lap with Reeves, and passenger Patrick Farrance, eventually claiming a new outright lap record at 100.749mph.

Reeves, with Mark Wilkes in the chair, went quicker in the first race of 2017 with their new lap record being 100.751mph and they, along with the Birchalls, broke the 101mph barrier for the first time in the Championship. However, their laps of 101.418 and 101.545 ultimately didn’t count as they both crashed out and were subsequently disqualified for causing a red flag.

We only had to wait one more year for the first, official 101mph lap though as both Reeves/Wilkes and John Holden/ Lee Cain achieved the landmark in 2018, the latter eventually claiming the new outright lap record.

Both Alan Founds/Jake Lowther and Pete Founds/Jevan Walmsley broke the 100mph barrier in 2019 to become the fifth and sixth drivers and passengers to achieve this feat.

Having made his debut in 1956, Cheshire’s Bill Smith had become the most successful rider ever at Billown by the 1970s with 13 wins to his credit including the Solo Championship of 1971.

However, it’s Welshman Ian Lougher who now holds the record with 32 wins between 1987 and 2013. He made his S100 debut in 1983 with his first win coming four years later in the 350cc race. He finally became the most successful rider in 2013, his final year in racing. 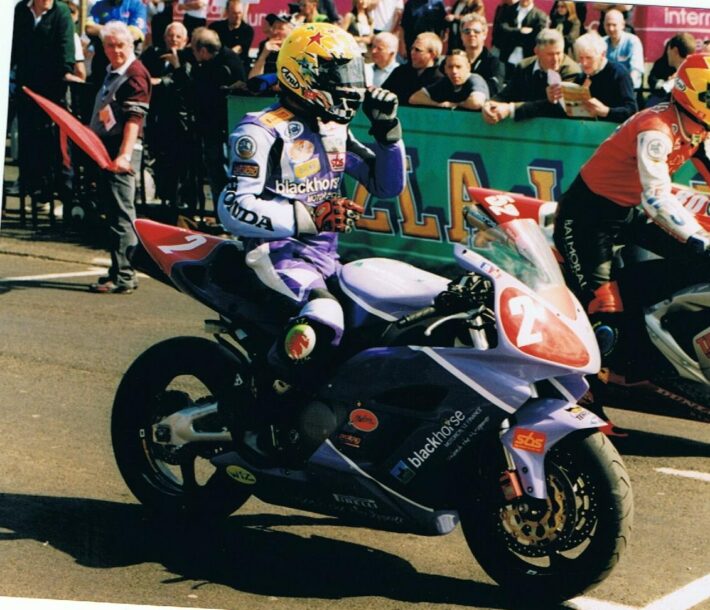 His win in that year’s Junior Solo Founders race saw him edge out Joey Dunlop whose 31 wins had long seen him out front. Making his debut in 1976, Joey was immediately successful winning that year’s Solo Championship and with his sixth win in the same race coming in 1999, some 23 years later, that total remains the best.

Dean Harrison has jumped up to third overall having dominated both the 2018 and 2019 meetings with five and six wins respectively. Now sitting on 24 wins, he has a great chance of taking the top step if he maintains his form over the next few seasons.

Michael Dunlop lies in fourth overall but was out of luck at the 2019 meeting and he’s two ahead of local rider Kenny Harrison. He was incredibly successful throughout the 1980s, throughout the classes, whilst he added more wins in the 1990s with the introduction of the Classic race.

Meanwhile, Dave Leach was another rider to enjoy success during the late 1980s and early 1990s especially in 1989 and 1990 and he has 17 wins to his name where he’s joined by recently retired Ryan Farquhar.

Chris Palmer, whose first win at the Southern, surprisingly didn’t come until 2005 is just behind them on 14 along with veteran David Madsen-Mygdal with the enigmatic Guy Martin one place further back on 13 alongside Bill Smith and William Dunlop.

Some of motorcycling’s greatest names have won the feature Southern 100 Solo Championship including Phil Read, Charlie Williams, Ray McCullough, Tom Herron, Brian Reid and Phillip McCallen but it’s perhaps not surprising to see Joey Dunlop have the greatest tally with the Ballymoney legend winning the title on no less than six times.

He won at his very first attempt in 1976 and promptly won three years in a row and although he missed the meeting for much of the 1980’s, he was back in the 90’s where he added three more titles to his collection.

Regular rival Ian Lougher is next up on 5 titles and that places him one ahead of Guy Martin, who made no secret of the fact the Southern 100 was his favourite meeting.

They’re the only riders to have won four Championships or more but there are four riders who have been victorious on three occasions including the winner of the very first race in 1955, Liverpudlian Terry Shepherd. Bill Smith’s titles spanned twelve years whilst Jason Griffiths was one of the most successful riders at the meeting during the 1990s.

Michael Dunlop’s third championship win in 2016 saw him draw alongside Shepherd, Smith and Griffiths with Dean Harrison joining them in 2019 when he took his third Championship title in a row.

With the Sidecar class joining the Southern 100 programme in 1962, the first dominant force was Charlie Freeman who took six wins between 1962 and 1969 although it was Ken Allen who claimed the first Championship race in 1968.

In the 1970s, it was the likes of John Watson and Allan Steele who were very much the drivers to beat, the duo both taking two Championships each.

However, by the 1980s, there was a new driver on the block and it was Lowry Burton who became the most successful driver in the Southern’s history, a title he held for 15 years. Partnered firstly by Martin Murphy and then Pat Cushnahan, the Ulsterman won five Championships between 1980 and 1988.

The next two decades saw Dave Molyneux, Geoff Bell and Ian Bell all win numerous Championships although Scots ace Bill Davie took three in a row between 1993 and 1995. When the F2 class became the sole class on the schedule though, Molyneux took over and he finally battered Burton’s long-standing total of 12 wins. He currently has 15 although, somewhat surprisingly, his last one was as far back as 2003.

Ian Bell created history in 1999 when he became the first, and only, man to win both Sidecar and Solo Championships, the latter having been won in 1987. Indeed, the Bedlington motorcycle dealer took seven wins on two wheels to add to his six in the sidecar class.

Meanwhile, Nick Crowe took seven wins between 2004 and 2007 and would surely have won more had he not has his career-ending accident at the TT in 2009. He was joined on this total by Tim Reeves after the 2016 meeting but the five-time World Champion added another brace to his tally in 2018 to move to joint third on the list alongside Geoff Bell.

In a career that started over thirty years, not only does Dave Molyneux have the most individual race wins around Billown, he’s also won the most Sidecar championships with six coming his way between 1986 and 2003 – it’s hard to believe it’s been 15 years since he last won the Championship although he hasn’t been ever present since then.

Charlie Freeman was the first three-wheel king at the S100 as he took five titles between 1962 and 1969, a total that was matched by Northern Ireland great Lowry Burton in the 1980s.

Nick Crowe took four Championship wins in four years in the 2000s, a figure that surely would have been higher had it not been for his career-ending crash at the TT in 2009. Tim Reeves matched this total in 2018 with his fourth success with the late Ian Bell the only other driver to have won three or more championships.

It’s now time to check out our Southern 100 Hall of Fame!