Prior to the 1954 Manx Grand Prix, the Southern Motorcycle Club held their race meetings in the north of the Isle of Man at Andreas Airfield with no suitable venue in the south of the island. As a result of a double win for the locals at the ’54 Manx GP, the club decided there should be a race in the south and held a meeting on what was to become known as the Billown circuit.

It was around this time that the Isle of Man Government decided to build a by-pass around Castletown and this would form an integral part of the new course. It wasn’t all plain sailing though and when the organisers approached Tynwald, the Island’s Government, for financial assistance to run the event, they were initially refused.

Celebrating 60 years of the ‘Friendly Races’…

This date would prove to be the first time ever that the Southern 100 races took place with the 4.25-mile Billown course the designated venue. And whilst they were initially skeptical, the Isle of Man Government, via the Department of Tourism, soon gave the event their full support.

A year later and Bob McIntyre, who would set the first ever 100mph lap of the TT Course in 1957, was one of the star attractions with a prize fund of £305 on offer to competitors. The tough Scot won the Junior but it was again Shepherd who took the honours in the 500cc category.

The sun of 1955 and 1956 was nowhere to be seen in 1957, when the event was granted ‘National Status’ for the first time, and instead torrential rain was the order of the day. However, the event continued to go from strength to strength over the next decade with more races, including Sidecars, added to the programme and by 1969 it was included in the British Championship schedule.

That came just a year after the introduction of what is now the premier race of the meeting, the Solo Championship with the three wheelers also getting their Sidecar Championship equivalent.

By then, many of the UK’s leading National road racers had lent their support to the meeting and names like John Hartle, Phil Read, Alan Shepherd, Chris Vincent, Derek Woodman and Dan Shorey were all victorious at some stage. 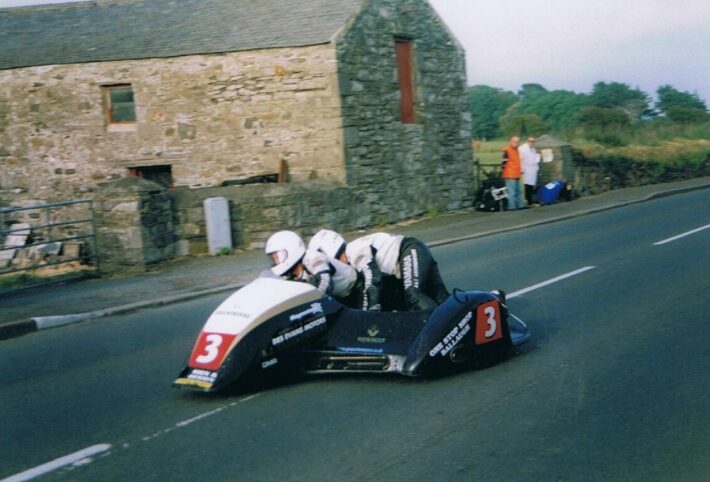 It soon became popular with the Irish contingent too, riders who were already well familiar with racing on the roads. Len Ireland and Brian Steenson were early winners whilst Ray McCullough was a dominant force in the 1970s. And in 1976, a certain Joey Dunlop made his first appearance at the Southern 100, immediately taking the Solo Championship.

The ensuing decades have seen some of the cream of road racing head to the Billown circuit and illustrious names like Phillip McCallen, Ian Lougher, Brian Reid, Jason Griffiths, Ryan Farquhar, Guy Martin, Cameron Donald and Michael Dunlop along with older brother, William, have all been victorious on numerous occasions And it’s been the same in the sidecars with Lowry Burton, Dave Molyneux, Ian and Geoff Bell, Nick Crowe and World Champions Tim Reeves and Ben Birchall amongst the race winners.

The meeting was soon extended beyond its solitary day and the 12-race programme now takes place over four days, still in its traditional mid-July slot. It is now one of five events in the UK to be sanctioned by the FIM as an International meeting, the others being the Isle of Man TT, the North West 200, Ulster Grand Prix and International Gold Cup at Oliver’s Mount, Scarborough.

The Billown Course also hosts two other meetings during the year, the Pre-TT Classic races (6 races) at the beginning of the Isle of Man TT fortnight and the Steam Packet National Road Races (3 races) at the end.

Check out the incredible milestones set at Southern 100 races…

1955 – The first ever Southern 100 races take place with local rider Derek Ennett having the honour of being the first race winner. The main 500cc race was held over 24 laps (100 miles) and was won by Liverpudlian Terry Shepherd.

1960 – Scots ace Bob McIntyre wins the Senior race but his excluded from the results after refuelling during the race.

1961 – The first ever dead heat takes place with Alan Shepherd and Phil Read crossing the line together at the end of the 350cc race.

1962 – The Sidecar class is added to the programme for the first time with Charlie Freeman winning the race.

1969 – For the first time ever, the Southern 100 hosts a round of the British Championship.

1975 – Ray McCullough becomes the first rider to lap the Billown Course at over 90mph.

1976 – Joey Dunlop makes his Southern 100 debut and takes the first of his six Solo Championship victories, shattering the lap and race records.

1979 – A broken steering damper forces Joey Dunlop to head for an open gateway into a field, fortyunately escaping injury, with Ballanorris since been renamed ‘Joey’s Gate’.

1981 – Lowry Burton/Martin Murphy recorded the first 90mph lap of the Billown Course on three wheels, with a speed of 91.28mph.

1987 – For the first time, Classic races were added to the race programme.

1988 – For the first time ever, the Solo Championship fails to take place. An accident causes the race to be stopped and it can’t be rescheduled.

1988 – The second dead heat occurs with Alan Dugdale and Alan Smith crossing the line together at the end of the Classic race.

1992 – After a long absence, Joey Dunlop returns to the Southern 100 in spectacular fashion, winning six races.

1995 – The Open Class sidecar races are run for the final time.

1995 – The 40th running of the event sees Bob Jackson win the Solo Championship, twenty years after making his debut.

1999 – Ian Bell wins the Sidecar Championship thus becoming the only man to win the feature races on both two (1987) and three wheels.

2001 – The entire Southern 100 meeting is cancelled due to the Foot and Mouth epidemic.

2014 – Dean Harrison sets a new outright lap record of 114.601mph in the Solo Championship race but has to settle for second behind Guy Martin.

2014 – Dean Harrison defeats James Cowton by just 0.001s in the Supertwins race, the third closest race in the history of the event.

2016 – Michael Dunlop wins his third Solo Championship, giving BMW their first, and wins all four Superbike races. The 100mph barrier is broken for the first time in the Sidecar class with Tim Reeves/Patrick Farrance, Ben Birchall/Tom Birchall and John Holden/Andy Winkle all achieving the mark – Reeves and Farrance claim the lap record with a speed of 100.749mph.

2017 – Dean Harrison wins his first Solo Championship and lap records are smashed as the 115mph is broken for the first time by Harrison, Dan Kneen and Michael Dunlop, the latter claiming a new outright lap record with a speed of 115.707mph.

2017 – John Holden/Lee Cain claim their first Sidecar Championship as Tim Reeves/Mark Wilkes increase the lap record to 100.751mph. However, both they and Ben/Tom Birchall lap at more than 101mph in the Championship race only to crash out and both be disqualified for causing a red flag.

2019 – Dean Harrison wins the Solo Championship for a third straight year and dominates the event with six wins from six starts to become the third most successful rider at the event with 24 wins. Pete Founds/Jevan Walmsley win the Sidecar Championship for the first time as the pairing, along with Alan Founds/Jake Lowther become just the fifth and sixth driver and passenger to lap Billown at more than 100mph.

You’ve got the history, now it’s time to check out the famous racers who left a legacy at S100.

Southern 100 Places to Eat and Drink

Southern 100 – Not for the Faint Hearted

Back To The Island

Dunlop Dominates at the Southern 100

"Updating my bank details to renew the policy was exceptionally..."