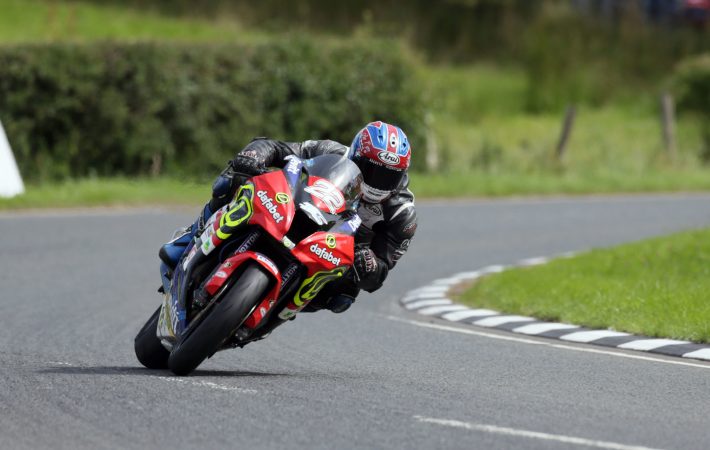 “I first got into to racing when my cousin Mark Young started the short circuits, then my brother started, and I then got my own bike to do track days and it just all began from there.”

Paul’s racing career began in 2005, with his first accolade coming in the 2008 British 125cc Championship in which he finished 3rd.

In 2009 competing at Donington Park in the British 125cc Grand Prix race, Paul was one place away from a point scoring finish. He dropped from 10th to 16th place following a soft gear change towards the end of the race, with none other than Marc Marquez sneaking into 15th place to take the final point on offer.

Following many years on the track, competing against today’s big names such as Marquez, Redding and Zarco, the Northern Irishman took a couple years out of racing before opting for a road racing career.

“My biggest idol, I couldn’t really pick one as I looked up to so many top racers such as Darren Lindsay, Richard Britton, Joey Dunlop and Martin Finnegan.” 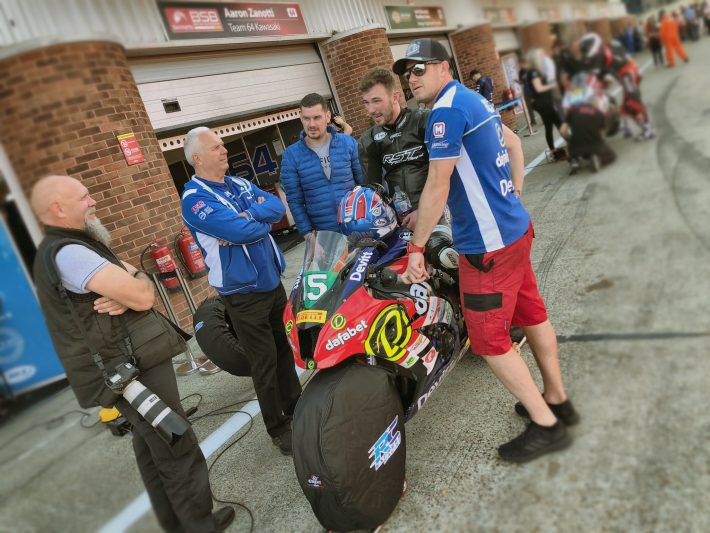 “Would have to be doing 131mph at the Ulster Grand Prix and finishing 4th in the Superbike race after not having ridden a big bike much.”

Paul’s career began in the Irish Clubmans Championship and he more than showed his talent in his debut year before venturing across the water to contest the 2008 British 125cc Championship. Riding an RS125 Honda for the highly experienced KRP team, Paul took a sensational win first time out at Thruxton and followed that up with another victory at Snetterton, ending the year in a brilliant third place overall. His performances also saw him receive a ‘Wild Card’ entry for the British round of the 125cc World Championship at Donington Park.

Paul stayed with KRP in 2009 when he finished in fifth overall with another victory being taken at Snetterton. A further visit to the podium was achieved at Thruxton whilst he finished in an excellent 16th place in the 125cc British Grand Prix.

Sadly, financial constraints limited Paul’s racing activities over the next three seasons but he did make selective outings in both the 125cc and Supersport 600cc British Championships. In 2013 though, he made the decision to steer his career in a different direction as he made his first tentative steps into real road racing.

That year saw him make his debuts at both the International North West 200 and Ulster Grand Prix and he certainly showed his aptitude at the former where, despite his lack of experience, he took a superb 12th place in the second Supersport race, finishing ahead of British Champion Stuart Easton and Simon Andrews. He went better still in the 125cc race at the Ulster GP taking a stunning third place, only beaten by road racing legend Ian Lougher and double 125cc British Champion Christian Elkin.

That season gave Paul the impetus he needed to move into pure road racing on a full time basis in 2014, contesting both the Irish Road Racing 125cc and Supersport 600cc Championships, the latter for the highly respected Moira Motorcycle Club who previously supported some of the sports finest riders including Gary Dynes and Gary Jess.

As expected, the 125cc class gave him his best results and he secured fifth place overall in the Irish Road Racing Championship as well as an excellent second in the concurrently run Ulster Championship. He focused his efforts on the roads north of the border taking a brilliant second place at the challenging Tandragee circuit and backing this up with fourth at Bush and Armoy and fifth at Cookstown.

The following year, 2015, gave him one of his finest career moments to date as he battled for the Irish and Ulster 125cc Road Racing Championships ultimately winning both in superb fashion. He claimed his maiden road race wins at the Skerries 100, Faugheen and Armoy whilst a brace of third places were taken at the Cookstown 100 and Tandragee 100 – and with strong top six finishes elsewhere, he clinched the aforementioned championships at the final round to complete a truly excellent season.

Solid progress was also made in the Supersport class and, continuing with the Moira Motorcycle Racing Club’s 600cc Honda, he ended the year in a strong fifth place overall in the Irish Road Racing Championship. He scored his first podium in the class at Kells with third and he more than backed this up with top ten finishes at Killalane, Faugheen, Cookstown and Tandragee.

Paul had a similar schedule for 2016 and the Mid Antrim 150, the first National road race of the season, saw him take first, third and fifth in the 125cc, Supersport 600cc and Supertwin races respectively. The Cookstown 100 was a major success too with victory coming in the 125cc class once more and Paul being awarded the ‘Man of the Meeting’ award with fourth place finishes in the Supersport and Supertwin races also.

The first International road race of the season, the North West 200, saw Paul continue his excellent form and some superb riding ended with him finishing eighth and ninth in the two Supertwin races and tenth and 13th in the Supersport 600cc encounters.

More podium finishes were taken at the National road races at Skerries, Walderstown, Faugheen and Armoy with the end result being second overall in both the 125cc Irish and Ulster Road Racing Championships and third in the Irish Supersport 600cc series. To cap another superb season, he also took an excellent fourth in the Supertwin race at the Ulster Grand Prix.

For 2017, Paul focused on the Supersport 600cc and Supertwin classes whilst he also made his debut in the premier 1000cc Superbike category. The North West 200 proved to be a mixed meeting but Paul took another top ten finish, this time in the Supertwin race where he took ninth place and that led into his debut at the most famous road race in the world – the Isle of Man TT Races.

Expected to be one of the best newcomers around the 37.73-mile Mountain Course, Paul was exactly that and, after winning his first bronze replica in the Supersport 600cc race, where he lapped at 115.991mph, he then took an excellent 19th in the Lightweight race. As well as being the first newcomer to finish the race, another bronze replica was taken and he made a favourable impression during the course of the fortnight to more than indicate his potential for the future.

The final International road race of the year, the Ulster Grand Prix, saw Paul have one of his best results to date as he claimed a brilliant fifth in the second Supersport 600cc race. He also took eighth in the Supertwins race and, riding a 1000cc BMW, finished 17th in the Superstock race before recording a new personal best lap around the Dundrod course at 126.794mph during the Superbike race.

Meanwhile, at the National Road Race meetings, he was again a regular podium finisher in the Supersport 600cc class, winning at Faugheen, and he ended the year in third place overall in the Irish Road Racing Championship. Competing in the Superbike category, he also had a strong year, ending the season in fourth and fifth respectively in the Irish and Ulster Road Racing Championships.

After winning the Supersport race at Armoy, Paul signed up with the Dafabet Devitt Racing team for the 2018 Ulster Grand Prix where, despite the mixed weather, he finished 6th in the Superstock race and 4th in the Superbike, which was the best result for Kawasaki. Paul was even able to make his name as one of a small group of riders to have lapped Dundrod at over 131mph. He later revealed he headed to the Ulster GP with the hope to achieve a 130mph lap, smashed it!

After impressing at the Ulster Grand Prix it was later revealed Paul would be heading to Macau, again with the Dafabet Devitt team. Making his debut at the famous event, Paul achieved a brilliant 14th place, in a race that came to a halt after a crash which involved Ben Wylie and Phil Crowe.

After an impressive race at Macau with the Dafabet Devitt team, it was announced in early 2019 that Paul had been signed by the team for the forthcoming year. With lots of training and time spent on the bike, the team and Jordan had high hopes for 2019 and they were right.

By the time the Isle of Man TT rocked up, Jordan had clocked up quite a few miles on the Kawasaki bikes and felt confident on the machinery. Paul managed to clock up a 18th, 14th, 12th, 11th and an impressive 4th place finishes over the two week period! The highlight of them all was during the Lightweight TT were Jordan battled it out for third place against Lee Johnston.

The rest of the season saw Jordan go from strength to strength gaining more experience and knowledge with every race. 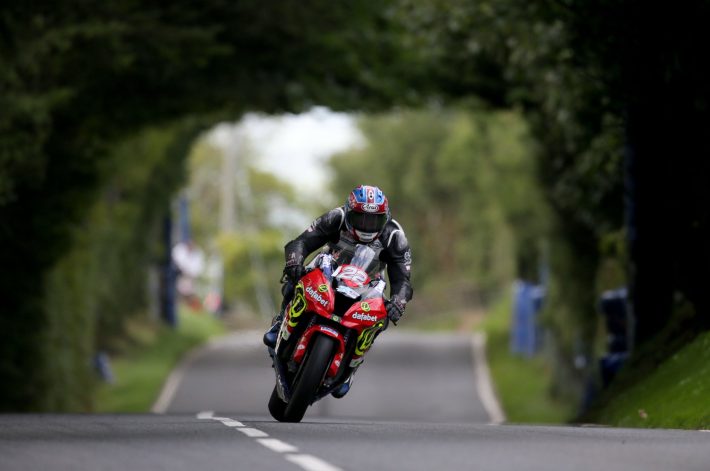 “The Isle of Man TT hands down.”

“I want to just keep chipping away, step by step, and moving forward from my results in 2018.”