We’re on a mission to create heightened awareness and debate around vital rider safety topics, initiatives and campaigns. Riders love to talk about all the latest safety and riding skills and here, at Devitt, we aim to be at the very forefront of that discussion.

Join the debate today on social media at #DevittRiderSafety

Every biker’s heart skips a beat when they spot a police motorcyclist homing in in their rear-view mirrors. Even if they have been keeping one eye on the speedo…

But did you know that UK police riders are among the most highly trained in the world, that they spend hours coaching ‘civilian’ riders to ride better through schemes such as ‘Bikesafe’ and the Scottish programme, Rider Refinement North – and that their skills are based on ‘Motorcycle Roadcraft, The Police Rider’s Handbook’, first published in 1965?

Whether or not you’re familiar with this legendary training manual, you will almost certainly have benefited from its insights into cornering, braking, positioning, overtaking and other vital riding skills, if you’ve ever taken any on-road training.

The book – the police riders’ ‘bible’ – is also required reading for ‘civvie’ bike instructors and it’s recently undergone a major re-write (including of the online version), so that it better reflects today’s traffic and road conditions, and the technology available on modern motorcycles.

Its publishers, ‘The Stationery Office, London’, say Motorcycle Roadcraft is now better than ever before with clearer text, diagrams and photos. Crammed with around 300 densely-packed pages of carefully considered advice from leading experts, it could be the best £18.99 you ever spend.

But would you bother?

“The thing is,” says Inspector Colin Reid, Head of Road Policing and Driver Training, Police Scotland, and one of the consultants who worked on the new Roadcraft version, “You can go into a motorcycle shop and see someone deliberate for an hour and a half over which pair of gloves to buy. They want the best available kit and the latest Bluetooth tech so they can speak to their friends from their helmet. They invest in everything – but will they invest in their ability to ride the machine? Sadly, the answer is often ‘no’.”

Colin – who clocks up thousands of miles on his own Honda VFR 1200 when off-duty – is on a mission to change all that, and admits to being ‘passionate’ about motorcycle training. And he reckons there’s no better place to start than by leafing through a copy of Roadcraft. 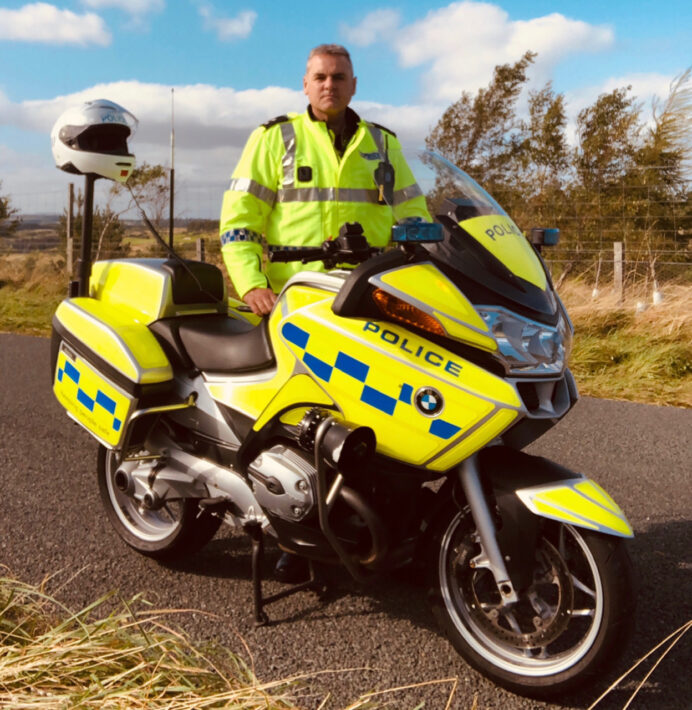 “It’s not just for the police, it’s for everybody no matter what your background and what your experience at riding motorcycles. Everyone can take something away from reading it. If nothing else, look at the system of Motorcycle Control. If you get your head around what that actually means, you will become a safer rider; everything comes down to observation; what can you see and what you cannot see, but more importantly, when you see it or when do you anticipate a hazard developing and what you do about it.”

Adds Colin: “Motorcycle Control might appear simplistic but it’s highly effective and it’s all explained in Roadcraft. Basically it’s about looking out for what could potentially ruin your day and doing something about it!”

Colin should know. Not only has he spent 21 years of his 26-year police career closely involved in driver training, he packs the miles in on his own time too. He frequently uses the VFR to commute, to tour Europe, to go camping in his native Scotland, even to travel to overseas MotoGPs. 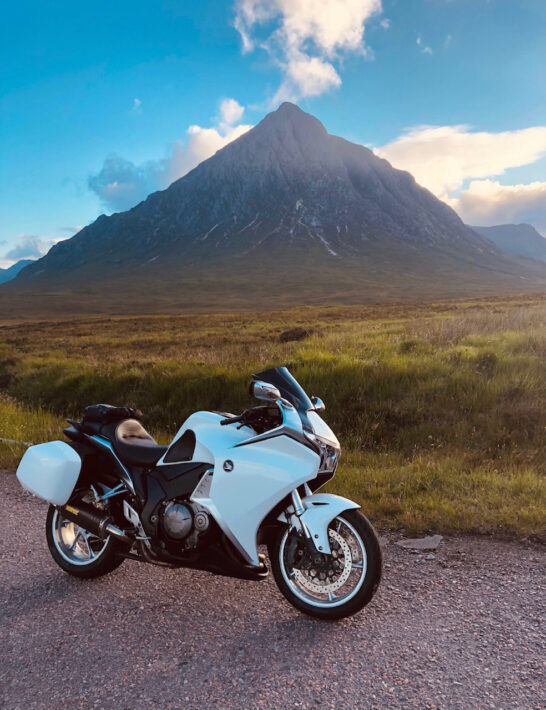 “I’m always on a motorcycle!” he says. Except, that is, when he was travelling from Scotland to London where, over two years, he and a panel of experts pored over ‘every single word’ of Roadcraft, revising and improving as they scrutinised the book page by page.

So what’s new? The overtaking section (which swallows up over 30 pages) has been significantly revamped. It looks at how to pass stationary and moving vehicles and goes into detail on single-stage as well as three-stage overtakes. It also analyses overtaking in a line of traffic – even on bends.

Occasionally mocked in the past for being a manual on ‘how to ride slowly’, today Roadcraft is anything but. It contains expert advice on ‘adapting to higher speeds’, how best to tackle a series of bends, how to survive aquaplaning and front and rear-wheel skids, and how to accelerate out of a bend. All potentially life-saving stuff.

It advises on how to gauge the ‘limit point’ through a bend (the furthest point to which you have an uninterrupted view of the road surface), how to cope with tricky cambers, how to master counter-steering (steering by turning the handlebars the ‘wrong’ way), how to wheel a bike around on foot, the risks of ‘paddling’. It even goes into detail on how to get your machine on and off its side or centre stand.

Because Motorcycle Roadcraft covers riding in its most basic – and most advanced – forms, it’s gold dust for beginners as well as for those who’ve been riding for years, claims Colin. “In police training we spend a good few days concentrating just on slow speed riding. If you call that ‘old man riding’, well, I’ve always argued that if you can’t ride the bike slowly and understand the balance and the dynamics of slow-speed control, how can you progress to higher speeds?

“If you can’t master clutch control, if you can’t even do a simple turn in the road, you won’t even pass your bike test, let alone be able to ride safely at higher speeds. As long as I’ve been involved in training, training styles and techniques and vehicle types and variants have come and gone but the one constant has been the information you can find in Roadcraft,” he says.

He says that the overtaking section of Roadcraft received particular attention because ‘it’s probably the most dangerous part of riding a motorcycle’. “Roadcraft is not just for police motorcyclists – it’s for anyone who wants to be a better rider. It gives you something you can read and apply on the road. Often the way motorcyclists hurt themselves is during an overtake or on a corner. For me it was important that we got sections like that absolutely bang-on.”

Colin agrees that not everyone will agree with everything in the book, underlining his firm belief that motorcyclists should always remain ‘flexible’ in their approach to traffic and road conditions. Adds Colin: “Roadcraft will help make you a better rider but it should give you more enjoyment out of riding your bike too.”

What are the most common mistake that riders make? “Not looking properly – looking at the road but not seeing the dangers that are there,” says Colin. How should riders combat that? “It comes down to training and awareness – and that’s just as applicable to the man and woman in the street as it is to highly skilled police riders.”

So where’s your £18.99 – roughly the cost of a tank of petrol – going to go? Towards that fancy pair of new riding gloves? Or a book that will make riding more fun – and that could possibly save your skin? 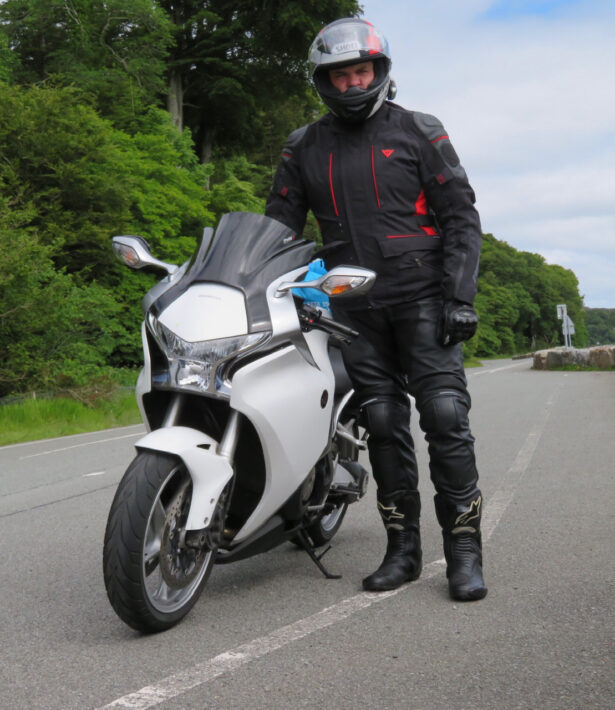 SOME GEMS FROM ‘MOTORCYCLE ROADCRAFT, THE POLICE RIDER’S HANDBOOK’

On riding position and balance:

“After moving off, place both feet on the foot pegs. Do this as soon as possible because it improves stability and control”.

“Sit so that you can reach the controls comfortably with a slight bend in your arms – avoid locking your arms straight.”

“The height, manoeuvrability and rapid acceleration of motorcycles are great advantages when overtaking. These features, together with the need for less road space than vehicles on four wheels, should make motorcycles the safest of vehicles on which to overtake. The fact that they’re not is because riders fail to appreciate all the hazards involved.”

“Most child pedestrians involved in accidents didn’t look properly. Get into the habit of asking yourself: ‘Could I stop in time if a child ran out?’

DO YOU HAVE WHAT IT TAKES TO BE A POLICE RIDER?

The questions below have been created by experienced Police Scotland motorcycle instructors and are used to test officers’ knowledge before they’re allowed out onto the roads.

Try them for yourself to find whether you’re a potential riding god – or an accident waiting to happen:

*All questions are based on Motorcycle Roadcraft.

How did you do?

10/10 correctly answered – well done, you must have read the book (or be a police motorcyclist. Or both.). Keep it up!

7 – 9 correctly answered – good work, but sometimes all it takes is a single error on the road to have a bad day. Time for a refresher course and some background reading?

4-6 correctly answered: Time to invest that £18.99 wisely and start reading ASAP. Why not take some extra training too? (link here to Are Advanced Riders Safer?)

1 -3 correctly answered: Definitely time to buy the book, arrange to have some training ASAP – and have a serious re-think about how to improve your riding.

David Williams is a freelance journalist who specialises in road safety, transport and travel. He’s been the London Evening Standard’s motoring correspondent for 26 years, also contributing to the Daily and Sunday Telegraph, Sunday Times and various magazines. He is a Prince Michael of Kent International Road Safety Awards judge.