The Harley-Davidson Motor Company is most closely associated with the familiar 45-degree air-cooled V-twin engine configuration; yet the history of Harley-Davidson engines has followed almost as many twists and turns as the iconic American company itself.

We take a look at the history of Harley-Davidson power – and how the engine designs have changed over almost 120 years.

When the 21-year old William S Harley drew the first blueprint of an engine designed to fit into a bicycle frame, he could not have predicted the success that was to come.

The first motorcycle was built in 1903, in the 10ft x 15ft wooden shed in Milwaukee that was the Harley-Davidson workshop of the time.

That first bike was a single cylinder model, based roughly on the recently-developed De Dion-Bouton internal combustion engine.

The company was soon fully committed to producing its own proprietary engine designs, and by 1909 the first Harley-Davidson V-Twin engine had been designed and made, setting a template for engine design that lasts until today.

Yet Harley-Davidson has produced many other engine configurations, from those early single cylinder models to horizontally opposed flat twins, and from air cooling to oil and water cooling to the most modern iteration – the electric power plant of the Livewire.

Here’s a closer look at the iconic engine designs that have kept Harley-Davidson at the forefront of global motorcycle manufacturers since 1903….

The first V-Twin from Harley-Davidson, the Atmospheric V-twin, was first produced in 1909 when the company was just six years old, largely in response to arch-rival Indian Motorcycle, who produced their first V-twin in 1905.

Generating just 7hp from 811cc, the engine was fitted to the small number of motorcycles, many of them for racing, that Harley-Davidson produced over the few years of production; yet the 45 degree, air cooled V-twin configuration set the stage for more than a hundred years of Harley-Davidson motors yet to come.

How to spot an Atmospheric engine

Atmospheric engines can be identified by the naked, unfinned cylinders linked to a single carburettor – although you would be very fortunate indeed to find one as only 27 were known to be produced, and even fewer survive. 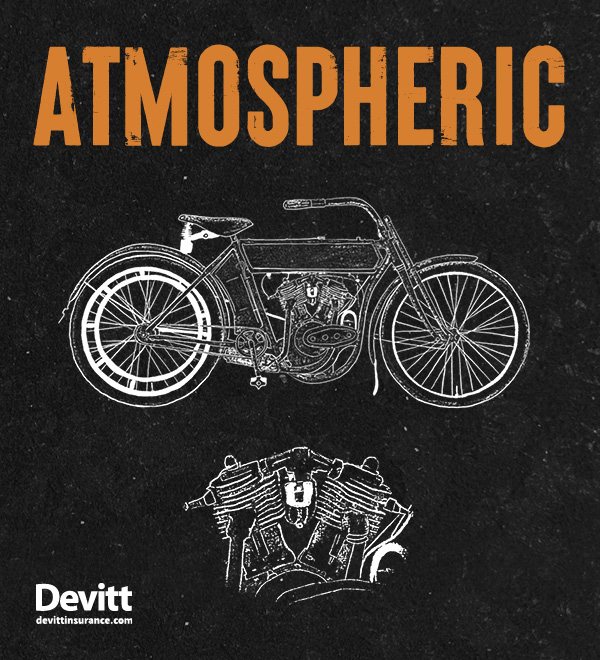 The V-twin fixed head – ‘F-head’ – engine is introduced in 1911 and will be the power workhorse until 1929 when the ‘flathead’ is introduced.

A simple yet powerful engine, effectively two singles on a common crankshaft and cases, the 45 degree cylinder configuration was hugely significant, the birth of a classic design that endures to the present day in the Harley-Davidson line-up.

The major innovation of the design was the mechanically operated inlet valve, activated by a pushrod from the camshaft, allowing engine revs and power to be increased substantially from earlier models.

After continuous improvement over nearly 20 years, by 1929 the F-Head was achieving 24hp from 1215cc – cutting edge for motorcycle engines of the time.

How to spot an F-Head engine

The F-head motor can be identified by the single external pushrod actuating the inlet valve, which sits on a distinctive valve cage atop each cylinder head. 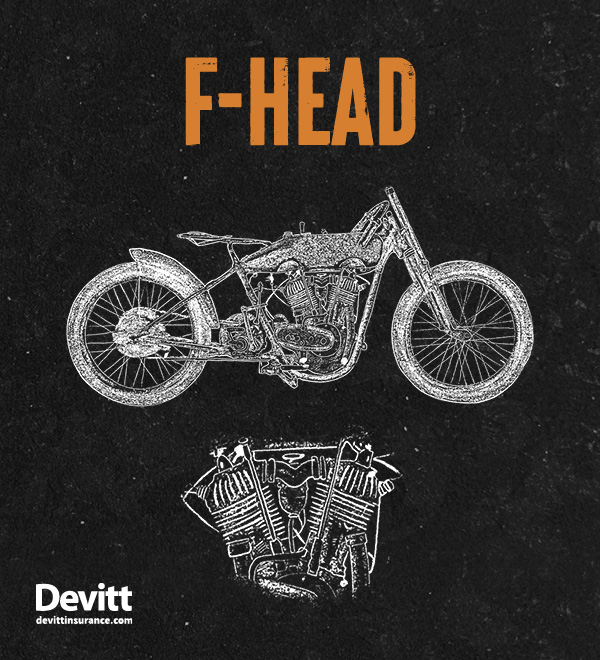 Named after its flat, curved cylinder heads, the Flathead or ‘45’ (named after the capacity of the engine in cubic inches) has enjoyed the longest life span of any engine in Harley-Davidson history.

The Flathead is a simple, robust and reliable side-valve engine, originally 750cc but increasing in capacity to 1200cc in 1930.

The engine was used until 1952 in the motorcycle range and, remarkably, from 1930 until 1973 in the three-wheeled utility Servi-Car – a span of 42 years and a real testament to the reliability of the design.

Flathead engines were popular because they offered a simpler design with easier repairs and servicing than overhead valve designs, an important consideration at the time for many owners.

60,000 WLA models were produced during WWII for military use, many of which found their way into civilian hands after the end of the war.

The Flathead motor was also highly successful in racing and in the K-series bikes – later to evolve into the Sportster – introduced to compete against lightweight, sporty motorcycles from the UK and Europe.

How to spot a Flathead engine

Flathead motors can be easily identified by the finned flat cylinder heads, which bolt directly to the barrels – the valve gear is set off to one side, typical for side-valve engines. 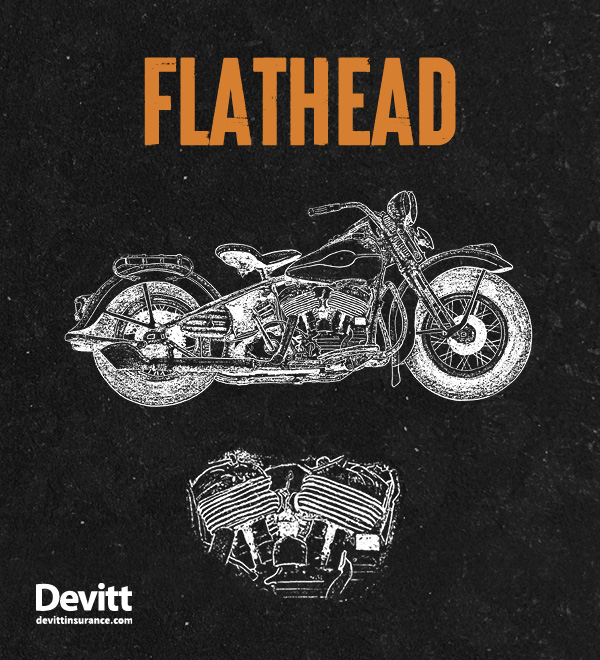 The first v-twin Harley-Davidson engine with overhead valves and a recirculating oil system, the Knucklehead got its name from the rocker boxes, which are said to resemble a pair of human fists with the knuckles sticking out.

The name was bestowed by customers; the factory name for the Knucklehead was the rather more prosaic ‘EL’ model.

Produced in 1000cc and, by 1941, 1200cc versions generating 40 and 45hp respectively, the ‘Knuck’ is seen as the father of all the later air-cooled Big Twin engines, which still carry design cues calling back to the 1936 original.

The Knucklehead is still considered by many to be the best-looking Harley-Davidson engine ever produced and early Knuckleheads reflect this in their high value to collectors.

How to spot an Knucklehead engine 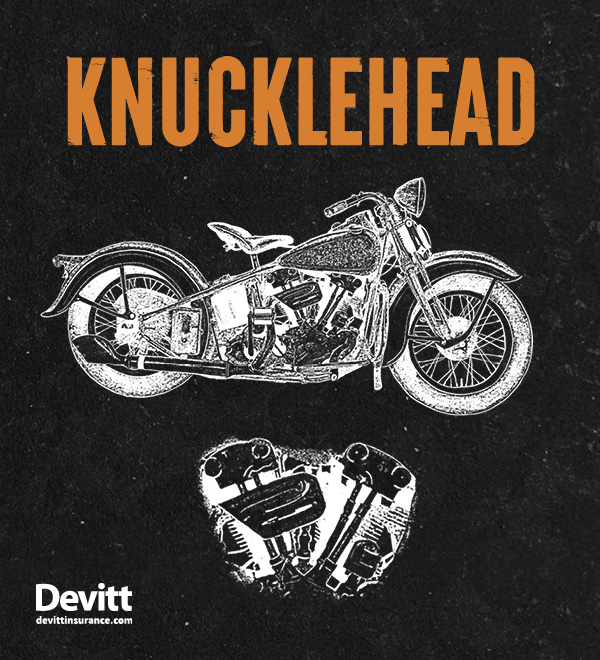 Introduced in 1948, the ‘Panhead’ is named after the distinctive chromed rocker covers, which resemble inverted cake pans.

These developments meant the ‘Pan’ was stronger, lighter and more durable than its Knucklehead predecessor and by the time it made way for the Shovelhead in 1965 it was producing 60hp.

By 1965 the engine was even fitted with an electric start – a real innovation for the time.

How to spot a Panhead engine

The large ‘cake pan’ chromed rocker covers which give the model its name makes this one of the easiest Harley-Davidson models to recognise. 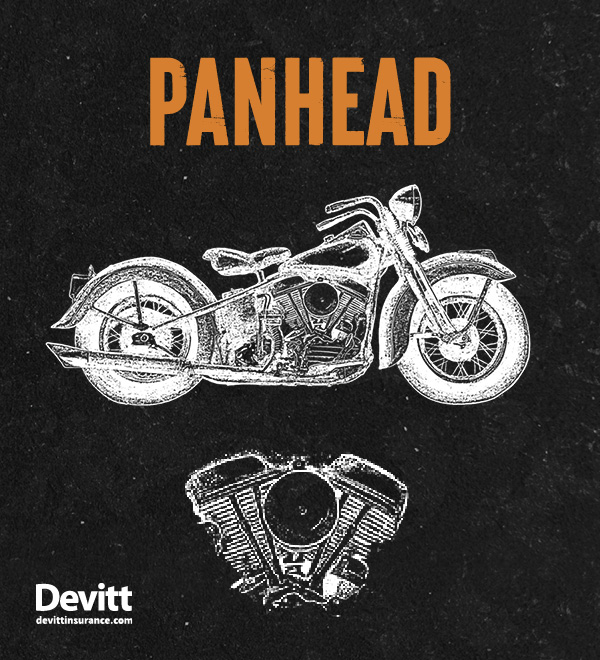 The 1340cc 65hp Shovelhead engine saw new, ported cylinder heads, higher compression pistons, and a new camshaft and carburettor – developments designed to produce more power to counter the increased weight of the new mid-‘60s Harley-Davidson models which were now being fitted with rear suspension, electric starts and other ancillaries.

Named, as with previous models, for after the distinctive rocker covers, the Shovelhead was initially introduced as a 1200cc model. 1978 saw the introduction of the more powerful 1340cc engine which soon became the sole offering for the remaining seven years of the Shovelhead’s reign.

How to spot a Shovelhead engine

Shovelheads are identifiable by looking at the rocker covers, which closely resemble coal shovels, with the chrome pushrod tubes resembling the shovel ‘handles’. 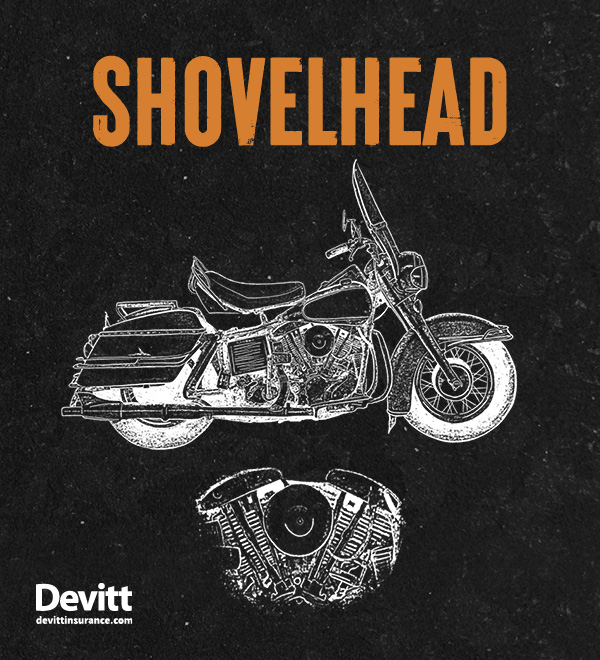 The Evolution was the first new Harley-Davidson engine since the Flathead not to be named after the rocker cover design – an attempt to call it the ‘Blockhead’ failed to gain traction and the configuration is now universally known as the Evo.

The all-aluminium engine was a quantum leap forward in design and reliability for Harley-Davidson and is widely credited with saving the company as it emerged from ownership by the AMF conglomerate.

The end product of seven years of development, the Evo addressed many of the issues of the Shovelhead – it was more reliable, quieter and with less vibration, using significantly less fuel and generating more power than its predecessor.

How to spot an Evo engine

The Evo engine is distinctive thanks to its all-aluminium construction and the block-like plain aluminium rocker covers. 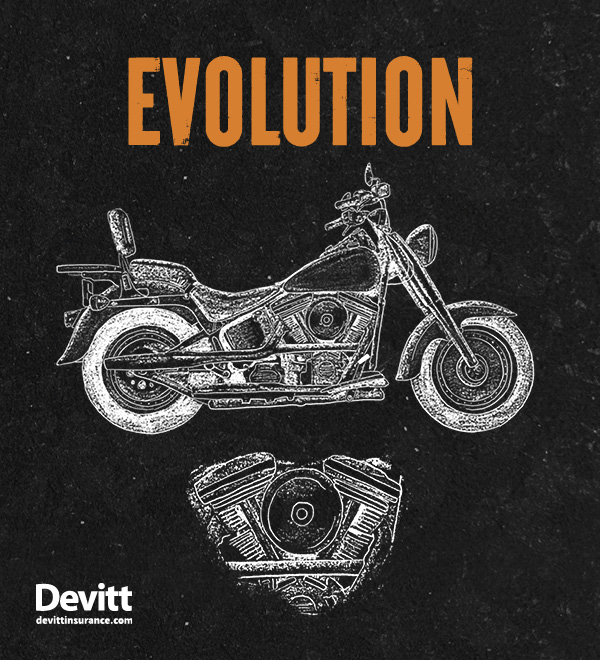 The massively successful Evo engine evolved into the Twin Cam 88 (for 88 cubic inches, or 1440cc) for the 1999 model year, named for the two chain-driven cams driving the valve system.

Delivering more torque and power than the Evo, and with more powerful oil pump, the Twin Cam was available with either a 40mm carburettor or sequential-port fuel injection.

How to spot a Twin Cam engine

Twin Cam motors can be distinguished from Evo motors by the heavy indentations on the top of the rocker cover and the more widely spaced pushrod lifters. 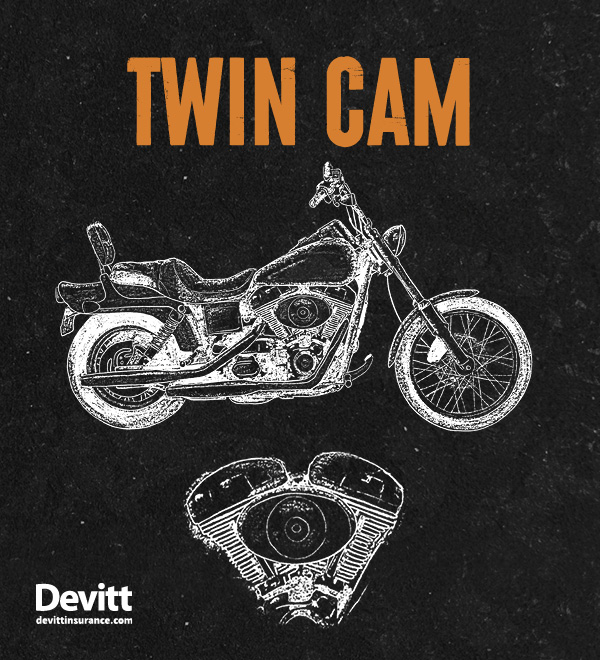 The water-cooled 1130cc Revolution engine was introduced in 2001 in the V-Rod, representing a major change of direction from the air-cooled engines which had become synonymous with the Harley-Davidson brand.

Based on the ill-fated VR1000 racing engine with a 60-degree long stroke configuration, internally counterbalanced and with double overhead cams and four-valve heads, the Revolution was designed in partnership with Porsche to provide competition to high performance imported street and cruiser motorcycles which were seen as a threat to Harley-Davidson at the time.

A 1250cc, 123hp version of the Revolution engine was introduced in 2005, becoming the standard for the V-Rod line. An even larger capacity version – 1300cc and 165hp – powered the VRXSE Destroyer, offered in the model range for customers as an off-the-shelf drag racing motorcycle.

How to spot a Revolution engine

Revolution engines are water-cooled, with cylinder water jackets and radiator assemblies making them hard to confuse with any other Harley-Davidson engine, the vast majority of which are air cooled. 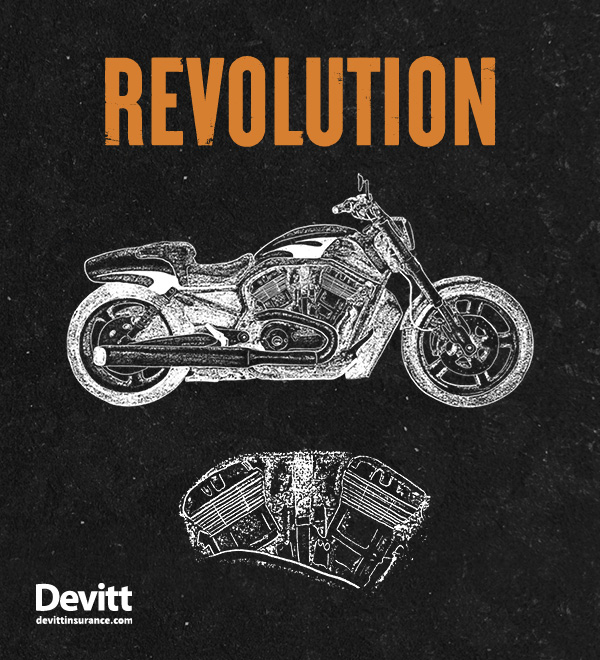 Named after the eight-valve head configuration, the MK-8 engine has been installed in all Touring models since the 2017 model year and all new Softails since 2018.

The Milwaukee-Eight follows the 45-degree air cooled v-twin design that has become synonymous with Harley-Davidson but with four-valve twin-plug heads and a single chain-driven camshaft, meaning the MK8 is more powerful, lighter, quieter and cleaner running than the Twin Cam it replaces.

An internal balance shaft reduces vibration while keeping the distinctive ‘look and feel’ of a large capacity v twin engine, which is available in engine sizes up to 1860cc (114 cubic inches).

How to spot a Milwaukee-* engine

As with many other Harley-Davidson models, identification is made simple by looking at the rocker covers, which H-D Director of Styling Brad Richards described as “looking like skin stretched taut over muscle, like the rocker arms are about to burst out of the engine.”

An attempt to give the nickname ‘Wafflehead’ to the Milwaukee-Eight, due to the supposed resemblance of the valve covers to waffle irons, failed to gain traction. 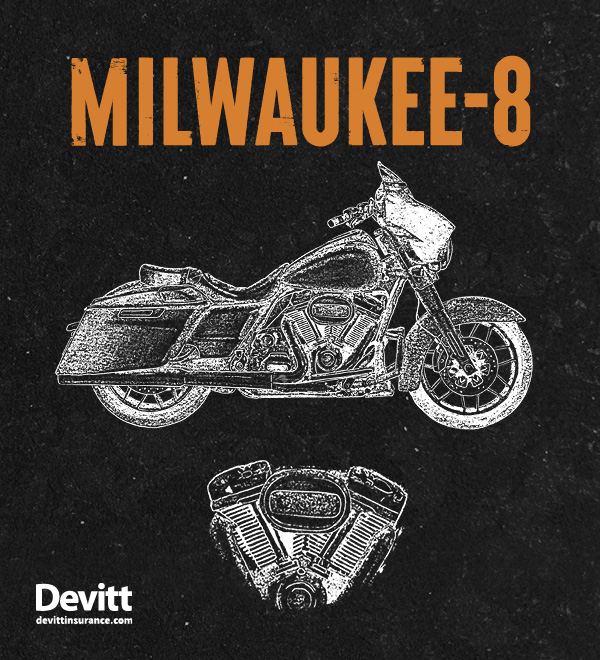 The future of Harley-Davidson engines

In 2021, the mainstay of the Harley-Davidson range remains the Milwaukee-Eight engine with the familiar 45-degree V-Twin configuration that has served the company so well for more than a century.

At the same time, innovation continues elsewhere in the range. The forthcoming Pan America adventure bike, due later this year, is powered by the next generation engine, the liquid cooled and counterbalanced Revolution Max, which continues the V-twin tradition but with technological innovations raising the power output to 145hp.

No doubt the Revolution Max in various capacity configurations will form the basis of a new family of motorcycles for years ahead.

Meanwhile, an even more radical motorcycle probably represents the true future for Harley-Davidson as internal combustion engines continue to be phased out worldwide.