This is supposed to be the best time of year – the start of the British biking season:

Yes, I know some of you don’t stop riding just because it turns cold and wet out there but I’m not one of you.

My Triumph Speed Triple stays taxed and insured throughout the winter months, just in case I get the urge. But I never do.

Must be something to do with my age:

But by the end of the first week in May my bike has its MOT certificate for the year and my insurance has been renewed. This year there will not be a new tax disc to display but I haven’t got around to removing the redundant holder yet.

Bank holiday Monday morning dawned bright and warm so as the rest of the house slept I sneaked the bike out of the garage, down the drive and onto the street to start it up. Why wake one family when you can disrupt three or four?

The disruption went on longer than usual because the bike wouldn’t start:

This often happens when the carbs have run dry but a few seconds with the petrol tap on ‘prime’ usually does the trick. And so it did until 100 yards up the road when the engine died again. Tap to prime again and off we went. And then it stopped again.

So I thought that maybe there was an airlock in the fuel pipe and a longer run with the tap on prime would clear it. As long as I didn’t mess with the fuel tap the engine would run but it was a rough as a badger’s backside and three miles down the road I turned round and went home. This wasn’t the start to a summer’s riding I had been dreaming of.

After removing the bodywork and lifting the tank I discovered the problem. There’s a small rubber pipe that runs from the inlet manifold to the fuel tap. Vacuum created by the manifold acts on a diaphragm in the tap to open the fuel flow. The pipe was broken into two parts but it wasn’t a split, a cut or an abrasion that was to blame.

It looked like it had been, erm, eaten. Gnawed through. By tiny teeth:

My friendly mechanic confirmed this when I presented the two halves of the pipe for replacement.

“You’ve got a mouse,” he said, cheerfully.

“I see it a lot in old cars. They usually prefer the wiring loom but they’ll try anything.”

Replacing the pipe with a new, braided item, I checked the rest of the bike for more signs of rodent infestation. I couldn’t see any.

Then I looked at my riding kit cupboard. My kit is stashed logically, with helmets on the top shelf, jackets one down, trousers below that and boots at the bottom. A bit OCD but mild.

I lifted out my best boots and they looked fine. Behind them was an ancient but lovingly preserved pair of Frank Thomas trials boots with metal plates on the shins – very rare now. All the straps had been eaten away leaving no way to fasten the boots. Next to the trials boots was an old but perfectly serviceable open face helmet. The entire lining had been shredded. It looked like cushion stuffing. 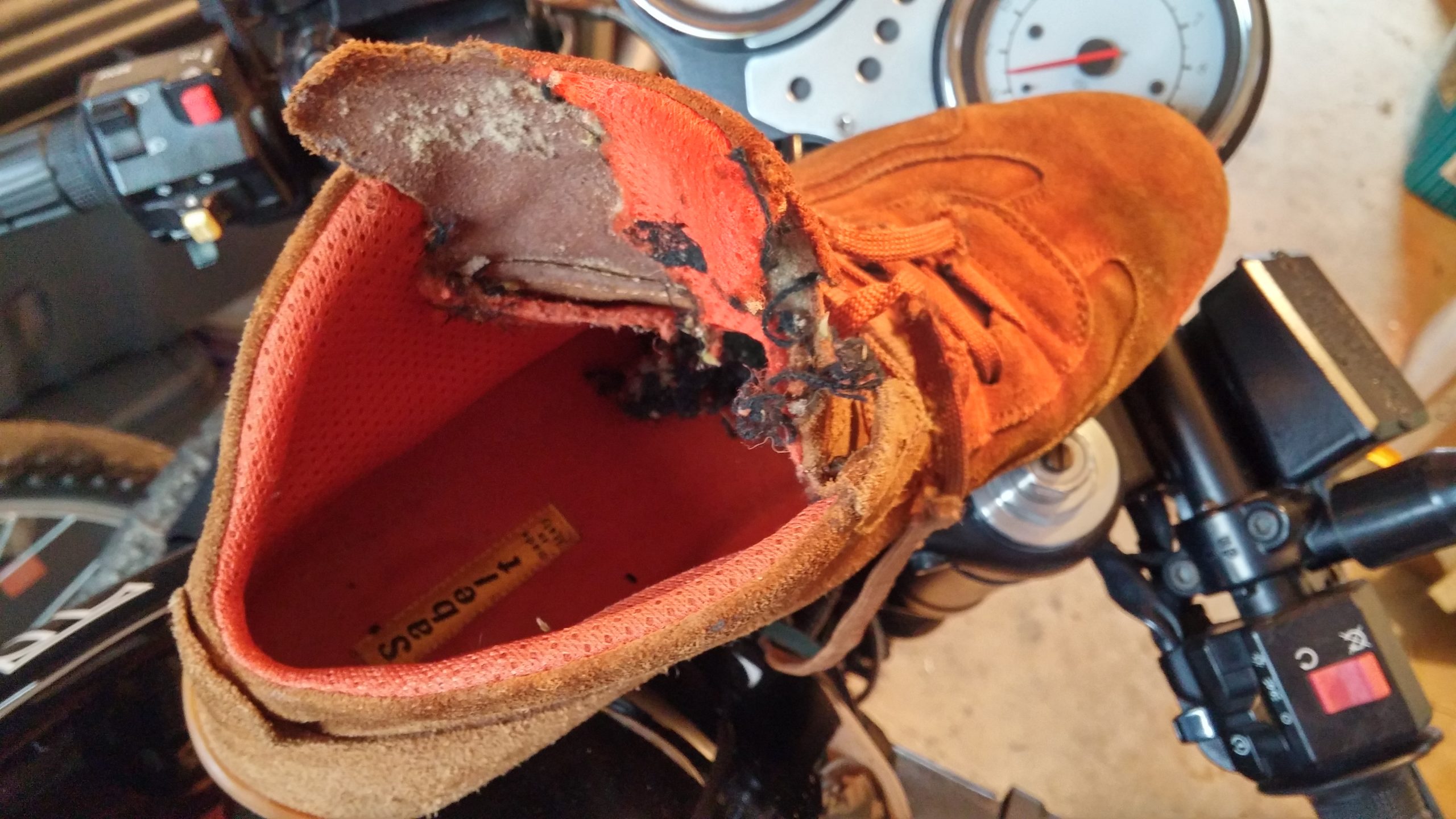 Worse was to come:

Right in the corner, surrounded by small pellets of poo, were my lovely suede Sabelt driving boots. Given to me as a gift by a sports car manufacturer at a new car launch in Germany ten years ago, I really loved those boots. I never wore them but I loved owning them. Mice think £200 suede driving boots are delicious, especially the tongue and the lining.

Two pairs of much-loved boots and a crash helmet are now in the bin and mouse traps have been placed around the garage. I fear the culprits are long gone, out into the warm weather, but when they come back, I’ll be waiting for them.

Anyone else experienced this?

Got any tips for keeping those rodents away?!

Martyn Moore edited Bike magazine in the early 1990s. The magazine’s circulation doubled while Martyn was editing it and in 1992 he was the British Society of Magazine Editors editor of the year. Martyn contributes to magazines and television programmes around the world. He rides a Triumph Speed Triple.

"The initial contact to get a scooter insurance quote as..."