Amazingly, the Kawasaki Ninja 250R can trace its roots back to the early 1980s, where the Japanese-market GPZ250R was launched. That bike used a super-high-revving parallel twin four-stroke motor, which was then used in the 1988 GPX250R, detuned in the 1990s ZZ-R250 before it finally wound up in the later Ninja 250R in 2008.

The original bike was a bit of a niche machine, but the latest model is much more widespread. It’s now built in Thailand rather than Japan, so is relatively cheaper to buy, and is very popular for novice riders, as well as those looking for a smaller machine.

The 25bhp power output is decent considering the capacity, but it’s some way off the 250cc two-stroke or inline-four mini superbikes of the 1990s, some of which made up to 60bhp. You need a lot of revs to make progress with the little Ninja too, with a rather breathless power delivery down low in the rev range.

The economy makes up for that though: the compact DOHC eight valve twin sips petrol, and you’ll easily get over 60mpg on a longer run. The light 165kg weight means minimal tyre, brake and chain wear, and the engine is also super-reliable, thanks to the long development period.

Chassis-wise, it’s a little on the bouncy side, with non-adjustable suspension each end and basic steel frame. The brakes are decent enough, with ABS on later models, and while the tyres look a little on the skinny side, they’ll deal with the power well enough. We’d recommend swapping the stock rubber for a higher spec aftermarket set of hoops though – you can definitely improve on the OE fitments in terms of wet weather performance.

Of course, styling is just as important in this class – and the little Ninja has that nailed. From a distance, it has the same looks as its bigger 600 and 1000cc siblings, especially in classic Kawasaki lime green… 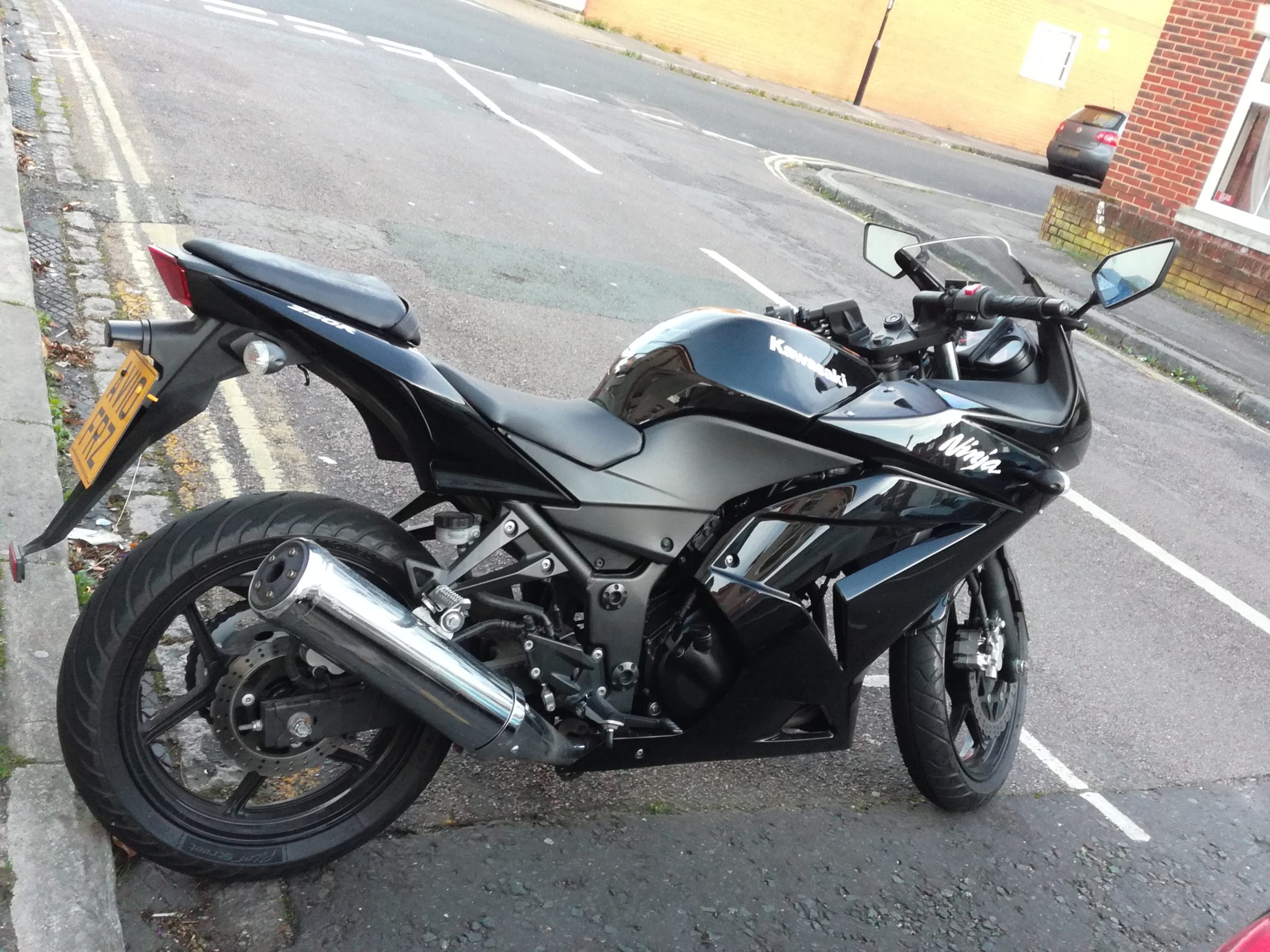 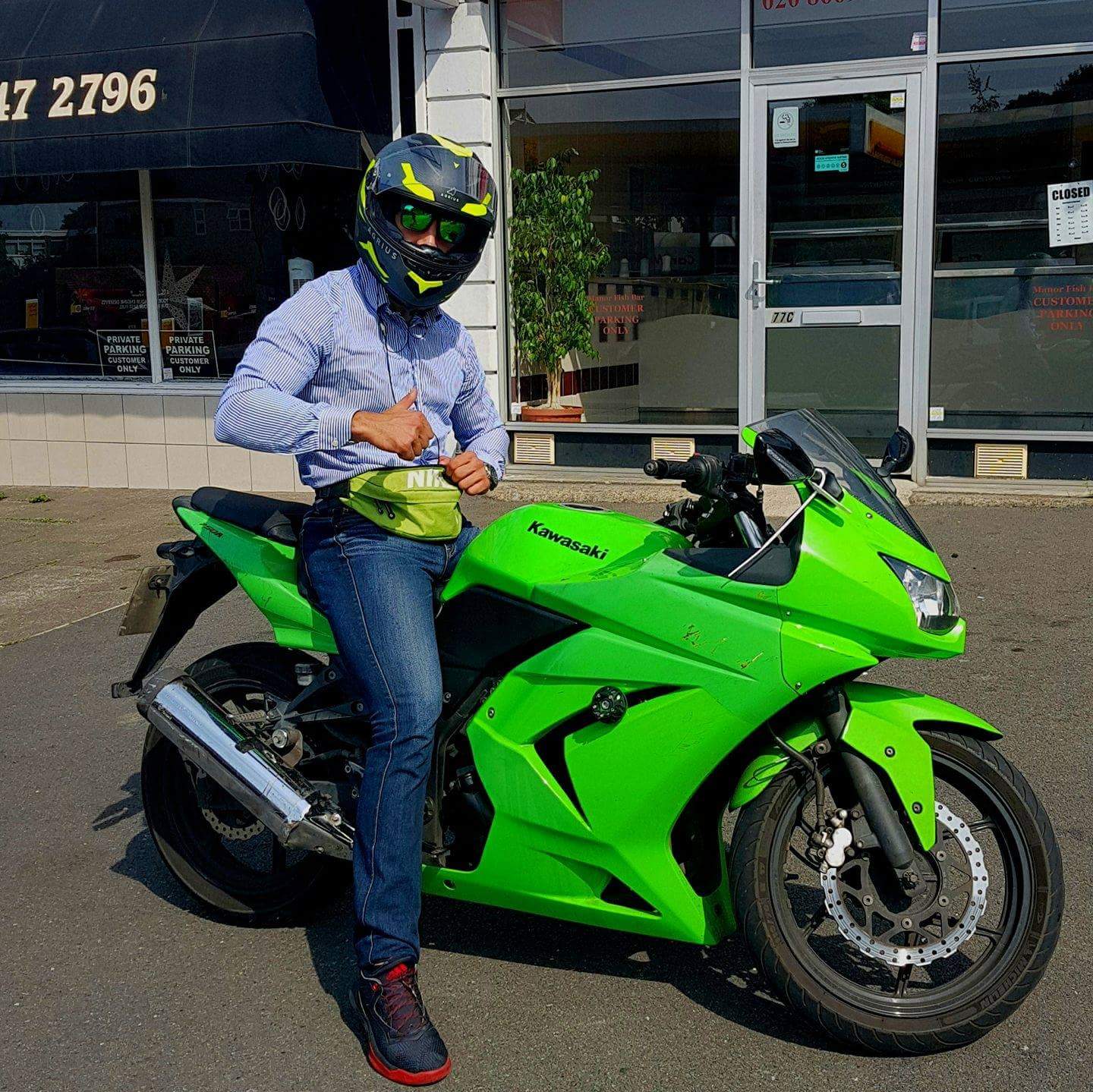 Jaya Vignesh 5 out of 5 stars

I am in love with the seating ergonomics

Nick from London 5 out of 5 stars

I can't decide honestly is it the green typical ninja Kawasaki color or the outside look at all or maybe the engine noise or the performance. I JUST LOVE MY BIKE... EVERYTHING! I enjoy every moment of driving. Its my first bike and was very hard to get all that money to buy it even second hand it took me and year. I don't regret a penny i love riding its my only passion.

The speed ! I want more power with the same looking bike !

The ninja was just perfect.Quick 0-60 miles for about 4 seconds.I did few travels from London to Brighton with a friend of mine on the back and on the highway i ride with about 80-90 miles which is pretty good for that small engine.

As i said engine was running like o'clock.Perfect noise akrapovic exhaust.Lovely Sound ! i did alot of racing second third gear alot of dangerous driving but never let me down i love it!

This bike was everyday in the petrol station.haha 14liter tank.Puting only high octane petrol running like jet engine.Still cost me alot to drive it but i love my bike i make about 100 miles everyday with it.15L/100 miles fuel intace in the city and about 9-10l/100 miles outside

For my 5 months exp with my ninja 250r 2009 the only problems she had was with the fairings i change them twice becouse they stop working every two months.Engine was perfect like o'clock i did alot of wheelies with the bike also some gentle smooth and some pretty hard when i was in my learning periods haha.Still no bended forks nothing damaged bikes running perfect.Japan precision i guess

5/5 brakes was on point ! Using the factory brakes even no problems at all.

Colgate 5 out of 5 stars

There isn’t something that sticks out to me that I love the most but I know I would miss the shape, it feels really comfortable

I wish it were rust resistant and a bigger engine!

I can’t get enough of riding my Ninja but part of me wishes she had a bigger engine...

“Pocket rocket” only way to describe her. Loves nipping round

I have never had a problem with this bike and hopefully never will!

"I found Devitt easy to understand their website and insure..."