If you are searching for the ultimate touring bike, then the Honda GL1800 Goldwing is worth a look.  This is a bike which has been created to provide ultimate comfort on long journeys with details such as extra padding in the seat, short footboards and a riding position which has been designed to be comfortable no matter how long you ride for.  Make no mistake, this bike is big and it packs a lot of punch with its 1832cc Boxer-six engine delivering a lot of torque and a surprising amount of acceleration.  For those riding pillion, no expense has been spared either with armrests and a padded backrest giving the impression you are reclining in an armchair rather than heading out on a motorbike.

You might worry that a bike this size would be heavy and hard to handle but owners report that it steers like a dream and handles with just the lightest of touches in part thanks to the high-tech aluminium chassis. Plenty of thought has been put into the additional features on the GL1800 Goldwing too with heated grips and seats, a six CD stereo and a whole host of extra add-ons to purchase including trailers.

As you might expect for a bike of this size and calibre, they don’t come cheap – but if you are looking for a bike which will last the distance and can be taken on long touring journeys without costing you physically, then the Goldwing could be the right bike for you.  If you really can’t face the hefty price tag then there are usually bargains to be found purchasing second-hand but it’s worth checking the bike out fully as owners do report occasional issues with wear and corrosion on the chassis, particularly underneath the bike.

Take a look at the Honda GL1800 Goldwing in action… 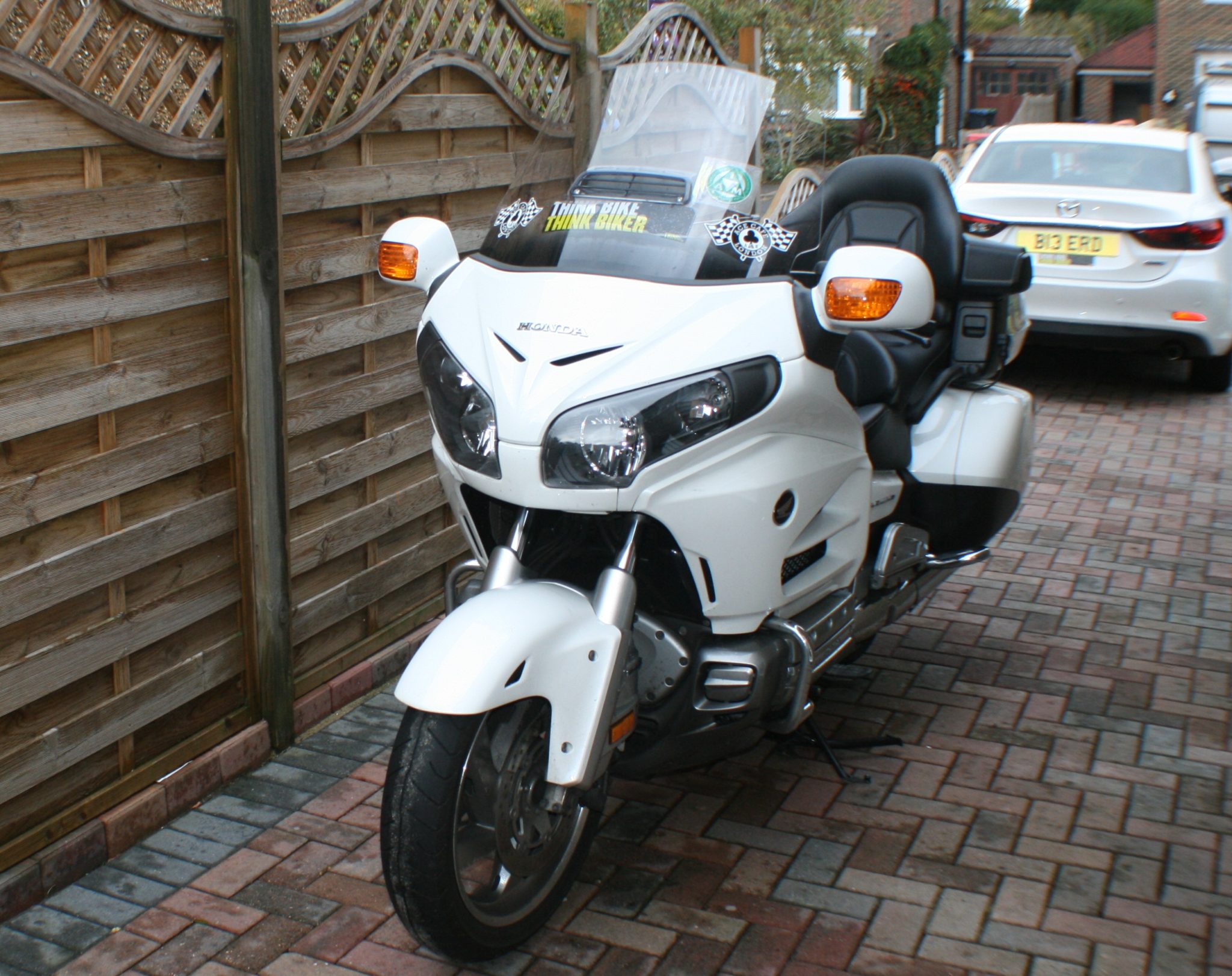 Geordie 5 out of 5 stars

Stop on a sixpence

Much bigger bike than I am used to

Comfort for both rider and pillion

In a class of it's own for pillion comfort. Suitable for any journey as long as it's on the road. Longest I've done is 900 miles in a day - It was a long day...

Stops very well for such a large, heavy bike. Good grip is down to the tyres rather than the bike itself.

Super smooth. It's a heavy bike, but as soon as it's rolling the weight disappears. Corners far better than it has any right to.

For such a large, heavy bike, performance is surprisingly good.

On a par with other big bikes. Tyres are a surprise, giving very high mileage to what I'm use to. as for fuel, depends how you ride it.

BigBear 5 out of 5 stars

I really enjoy having my "Wing" and it is my main means of transport and I ride it whenever I have the opportunity. It is comfortable and easy to manoeuvre in traffic. As I do a lot of travelling up to, and around London I always go into London on it as I am not phased by the amount of traffic in the centre and with being able to progress in higher gears than many bikes, I am not having to change gear so often making things more relaxed in heavier traffic. Much easier (and cheaper!) to find parking with no congestion charge.

In heavy rain the water tends to puddle around the rider's crotch as there is no way for it to run off the seat.

It is a joy to ride, very smooth. Once underway is very light to steer and handles with the lightest of touches even though it is 435kg. Cornering is a dream as it is almost like it's on rails!!!

It is a powerful bike with massive torque. Able to be in top gear around 20 mph and can do a standing start in 4th or top though, not advisable!!! performance for a 1832cc heavy machine is good, a cruise on motorways on a long journey at 65 mph can give around 50 mpg, around local riding is about 42 mpg

In heavy rain the water tends to puddle around the rider's crotch as there is no way for it to run off the seat.

Have had problems with delamination of wheels and rusting of crash bar welds and leading edges – even though when not being used it is dried off and kept in a garage. Reverse will not always engage with starter motor/reverse unit just whirring and nothing happening, occasional electrical burning smell from it too.

Has dual and abs braking system, is very responsive and a good grip in all weathers though, I don't ride in snowy or icy conditions.

"Very easy to purchase with lots of additional options if..."