How are motorcycle crash helmets made?

With the crash helmet being the only compulsory item needed by bikers to ride legally on UK roads, we give you an insight into the process used to make motorcycle helmets. From the basic design elements all the way to how different manufacturers market them.

The four basic elements of a motorcycle helmet are:

These four elements work together to provide protection in the most effective way in the result of an accident.

The thin, hard, outershell is made from either polycarbonate plastic, fiberglass or Kevlar. These plastics offer a protection barrier around the softer, foam lining of the helmet; the two main purpose of the hard shell is:

Fibreglass shells are highly recommended along with Carbon Fibre and Kevlar as they have the ability to make helmets lighter. The outershell is designed to be tough but also compress when it hits something hard therefore dispersing the energy to lessen the force before it reaches your head.

The inside features the soft, thick lining of the expanded “EPS” foam.  The foam liner needs to crush during any impact to increase the distance and period of time which the head stops and reducing its deceleration. The inner lining must not be more than 1 – 2 inches (2.5 – 5.1cm) thick otherwise this can make the helmet too stiff inside and not give enough movement if there were to be an accident.

Next is the comfort padding which is the soft foam/cloth layer that sits directly around your head and face making it more comfortable for elongated periods of time.

Finally the retention system, commonly known as the chin strap, is the vital piece of the helmet that keeps it secured to your head during a crash. Make sure that your chin strap is fastened securely each and every time you put your helmet on.

The age-old debate on what’s the best type of helmet to wear: open face vs full face. Many will say the style of bike you ride will determine the type of helmet you’ll purchase. It’s common for motorcyclists to own 2 or more helmets due to frequency of use and preferred style. 75% of motorcyclist owned and favour full face helmets, however 38% also own and wear flip up helmets too!

Full face is quite literally a full faced helmet, not one part of your face is exposed. These helmets have movable visors so they can be flipped up if necessary. However, full faced helmets are deemed to be the safest because they offer the most protection to both your head and your face.

Full face helmets are normally desired by those who partake in sports such as road racing and track riding as they are at a high level of vulnerability if an accident were to occur.

The whole of the face is exposed in this style of helmet. Often one to be worn when the weather is warmer, just watch out for bugs!  Riders who opt for this style helmet often team it with a neck warmer/ neck tube to add a layer of protection to the face.

Founded back in 1996, MIPS is a new brain protection system that can be found in a number of the new model helmets. It works as an extra barrier to help reduce any harmful forces on impact that could damage the brain.

Research has shown that falls that occur at an angle can cause severe injuries to the brain. The rotational motion in a fall can be extremely lethal to the brain, that’s why MIPs BPS systems were invented. The systems have been designed to let the head move inside the helmet, only 10-15mm in all directions, thus reducing any potential rotational motion that could be transferred to the brain. MIPS BPS has conducted over 20,000 tests, including third party testing, to confirm that it can add more protection in certain scenarios.

These tests include the helmet being dropped from 2.2 – 3.1 meters at a 45-degree angle impact that’s covered in grinding paper – these tests are repeated at three different types of impact points on every single helmet in all sizes.

The journey started by Hans volt Holst in 1995 with lots of research and support from Peter Halldin, the first patent registered in 1998 and the first prototype was tested in the University of Birmingham by 2000. It wasn’t until 2007 that the first ever equestrian helmet was launched with the MIPs system in place. Since then there’s now over 70 helmet brands involved, ranging from equestrian to motorcycle, from all over there world with over 9.2 million MIPS BPS systems produced.

You’ll find MIPS in a selection of motorcycle helmets including:

There has been an increase of helmet accessories over recent years to the ease of making them quick, easy and cheaply.

Similar to helmets, visors and goggles are also required to meet certain standards:

Those riders who opt for an open-face helmet often wear a pair of sunglasses during the sunnier months. Sunglasses also need to meet certain standards to insure they provide the best protection.

When you’re standing inside a shop you’re not going to get a real feel for the helmet, so it could be an idea to ask if you could take it outside. You’ll need to remember that ventilation is going to be key during the warmer months to help keep you cool when you’re riding.

Modern helmets are normally fitted with an air control system which breaks off if you were to be involved in an accident so there’s no risk of any added injury to you. Helmets normally have a choice of 10 or 20mm vent holes dependent on how much airflow you desire, although they should all feature switchable covers.

So, what colour helmet should you pick?

There’s been a long debate about the colour of a motorcycle helmet and the correlation of accidents, although it is recommended to always wear hi-vis and bright colours to be seen on your motorcycle, you can’t go wrong with a stylish black!

Does the colour of your helmet affect your visibility?

A recent poll conducted on Keep Britain Biking found that 64% of voters believed that the colour of your motorcycle helmet does impact your visibility on the roads.

Although 38% of bikers opt for a black helmet followed by white at 23% and then multiple colour designs at 13%. As always fashion trends and style changes but it’s safe to say there’s no right or wrong when it comes to purchasing a motorcycle helmet, all you need to remember is to look out for the SHARP rating. 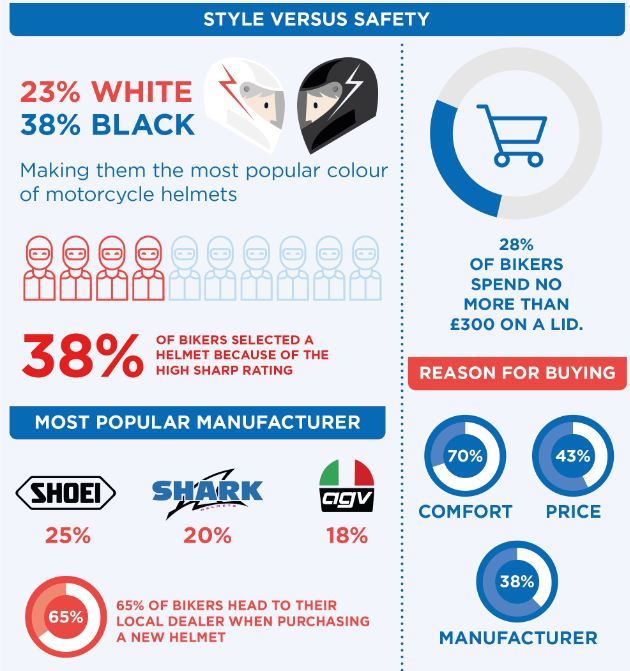 There are plenty of establishments that you can buy motorcycle helmets from, and it’s always best to shop around for the best deal as well. A majority of stores now have online outlets therefore you can save yourself some time and money by purchasing online, however it’s always worth taking a trip to your favourite store beforehand to make sure the fit and feel of the helmet is right for you.

Looking after your motorcycle helmet

To make sure you can get the most out of your helmet, regardless if you wear it every day or once in a while, we’ve got some handy tips on how to maintain it:

Check out this quick video with step by step instruction…

Now you know how a motorcycle helmet really works, it’s time to find out all about SHARP and their amazing testing regime that keeps motorcyclists safe on the roads. Don’t forget to check out our infographic too!