With moped and scooter crime at an all-time high in the Capital right now, proposed new legislation has finally been announced. Amber Rudd, Home Secretary, states that police officers will be given higher levels of legal protection when pursing moped related crimes.

Over 19,000 ‘moped enabled’ crimes have been committed in London since the start of 2017, averaging at 53 incidents per day, Rudd has officially stated there will be more protection for those officers who pursue moped thugs.

Culprits are usually aged between 14 – 19 years old and tend to target Hackney, Islington, Westminster and Camden areas, although moped crime is rife for the whole city. The scooters or mopeds that the thieves are riding as normally stolen too, representing more than 50% of all vehicles stolen in London currently.

Back in May 2015 the BBC reported that suspects on motorcycles were removing their helmets to avoid arrest, which was met with a public outcry.

The police response at the time spoke of a moral duty to protect the public (which includes offenders) and how they had to ‘mitigate the risk’ which includes factoring in the fact that the offender may not be wearing a helmet.

The Independent Police Complaints Commission revealed that they had “overall concerns about the standard of training made available to officers and staff in relation to motorcycle pursuits” shortly after the death of moped rider Reece Leon Robinson-Webber, 15, from Streatham.

Speaking at a conference of police chiefs and crime commissioners, Rudd has confirmed her support for a change in legislation: “You said that officers have concerns about pursuing and apprehending moped-riding criminals.

“You explained that some officers worry about their legal position when pursuing suspected offenders when they’re on moped or scooters. So we’ve listened and we’re taking action. We’re reviewing the law and practice regarding police pursuits.

“We want to make sure officers feel they have the legal protection they need to go after moped and scooters gangs. I can say today that there will be a change.”

Scotland Yard have also officially announced a range of new tactics to help combat the rising levels of moped-based crimes. These crimes include robberies and snatching of bags, purses and mobile phones, but some have even resulted in violent assaults and acid attacks.

The new proposed ideas including using DNA sprays and mobile stinger devices to deflate tyres, and with the rising number of crimes being committed by moped each year, Scotland Yard are confident these new initiatives will help see these figures reduce.

The DNA spray is used when suspects cannot be pursued due to safety reasons, then if they are later arrested the substance will show under a UV light. DNA spray has already been used multiple times by the police in London and resulted in one arrest and could potentially help to capture many more.

Met Commissioner, Cressida Dick shared her confidence on the new tactics: “We have brought all our tactics and specialists together to use every ethical option to put a stop to the rise; arrest those responsible; disrupt offenders; dismantle the criminal markets that make these offences lucrative and change the public’s behaviour to make them a part of our effort.”

It has also been revealed by the Met that using the Trident gangs team to respond to two-wheel based offences was a success; especially with officers manning the police control room 24/7 to deploy response team to help foil any potential moped attacks.

In a promising light, Dick confirmed that offences fell by 24% between June and September after these new initiatives had been put into force. 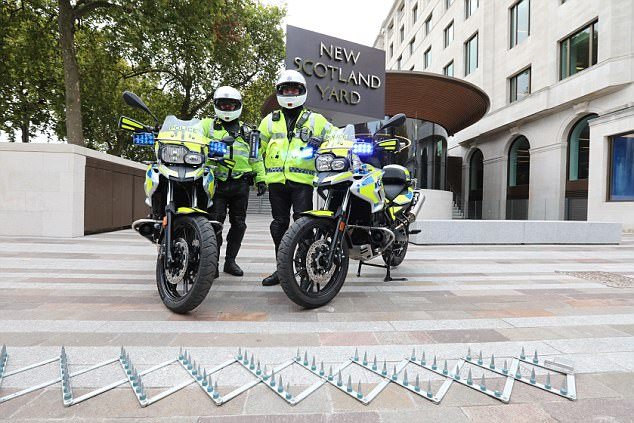 Police have been equipped with four specialist BMW scrambler bikes used specifically to target moped riders who use alleyways and runs to escape police pursuits. The BMW scramblers are designed to be more agile and lightweight when riding through London streets.

The new high-powered scramblers will be active in moped theft hot spots including Islington, Hackney and Camden. The Met hope that this will deter bike thieves off the road for good.

The Scotland Yard Commissioner spoke of the impact the bikes are already having:  “We haven’t reduced pursuits. There are a lot of myths around this. People think if they take their helmets off we will stop, but that’s not true.

“We have more than doubled the number of pursuits and that will continue, particularly with the introduction of new bikes.”

Operation Venice is well underway of bikers across the UK, especially with a focus on those London riders with encouragement from insurers and police alike for motorcycle owners to make sure their motorcycle is secure as possible.